I haven’t had a chance to blog this yet, but last Thursday at the games club I finally got a chance to try Lion Rampant.   After Bruce and Charles had finished their first game, between two Dark Ages forces, Charles graciously gave me the chance to play a re-set with his Islemen army.

I was impressed at how quick and decisive the game is   Combats between units are short, sharp and decisive, and units which are beaten in combat have a tendency to disintegrate shortly thereafter.   At the same time, the unit activiations are unpredictable and can be pleasantly frustrating.  My wild and crazy foot were perfectly positioned to charge a weakened unit, but sat at the bottom of the hill and soaked up arrows for several turns.  Ugh.

Fortunately I held back my two strong units of armoured foot, along with my hotheaded leader, until the endgame and wiped the table with them.  Here Bruce’s archers stand nervously around, waiting for a buzz saw of bearded psychos in armour and axes to descend on them. 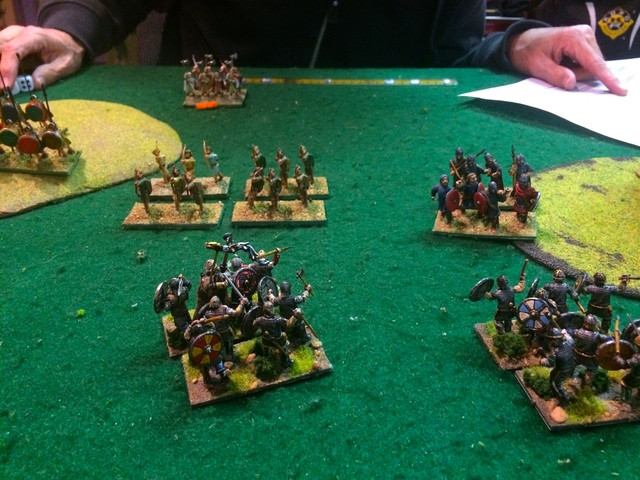 I quite like LR and look forward to trying its fantasy cousin, Dragon Rampant.

On Sunday I made the hour long drive south to Toronto to play one of Glenn Pearce’s epic 6mm Napoleonic games.   The last time I was there in the summer we did Ligny, and since then Glenn and his chosen men have been slowly studying the Waterloo Campaign.  This time it was the latter half of Plancenoit.  When the scenario starts, the French hold the town and Lobau’s corps is extended  in line, hoping to slow down the Prussians.  I was assigned the Prussian right under Bulow and had all sorts of advantages including a cavalry brigade (Beier) that was free to right around the left flank of the French.  You can see them on the top right, getting ready to charge into the back of Bony’s brigade while Loebell’s infantry brigade pins Bony from the front.   At the left centre, my other good brigade of infantry, under Lettow, marches forward for a firefight with Thevenet’s brigade. 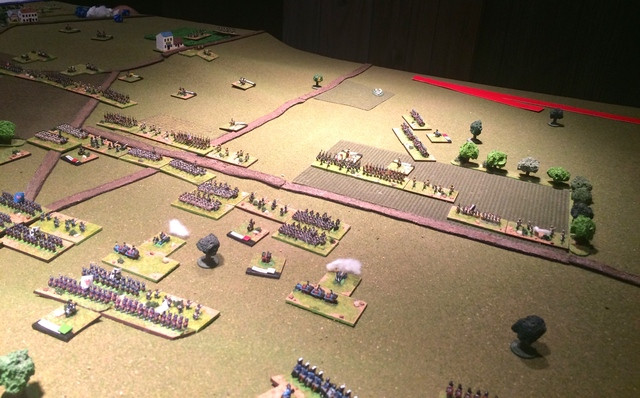 I was very fortunate on my left.  Before this photo was taken, Lettow’s brigade staggered Thevenet’s with very lucky musketry, and then charged home, Lettow leading from the front.  I won the melee, dissolving Thevenet’s brigade, but losing Lettow for a turn to a slight wound.  That meant his brigade milled about in confusion, and blocked the follow on brigades from exploiting the hole in the line. 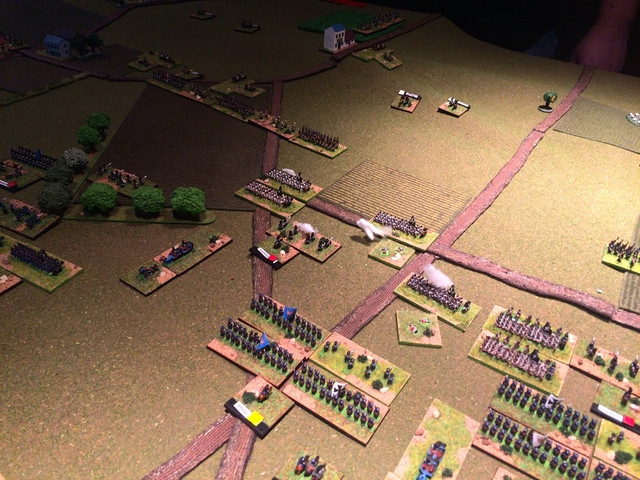 On the right, Beier’s brigade of cavalry charges Bony’s brigade.   In these rules, are assumed to take the most advantageous formation.  So, Bony’s brigade have the advantage in fighting the cavalry and see of Beier, destroying one of his three units of Uhlans.  I was a little frustrated that the French infantry was not considered to be in square and thus suffer the fire of Loebell’s troops.  However, I was delighted to learn that they were considered to be turned about, so Loebell was able to charge them in the rear and shatter them 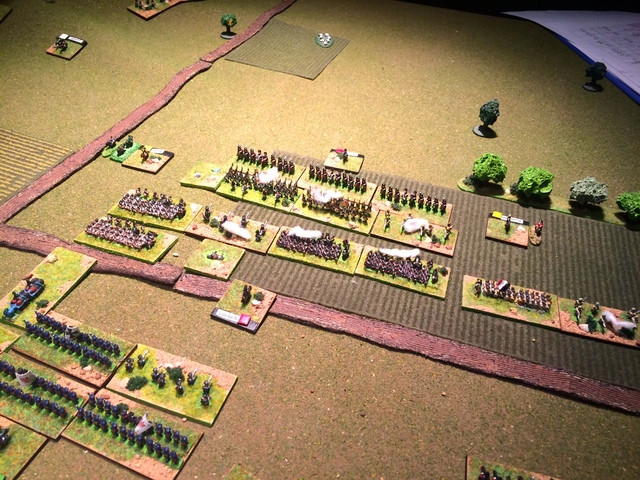 Chris, as the French player, now had nothing to stop Bulow except for some Young Guard skirmishers, whom he gamely pushed forward.   But that was pretty much the game.  With Lettow’s brigade back under command and reformed, and reinforcements coming up behind, I was in good shape to crack the French line wide open. 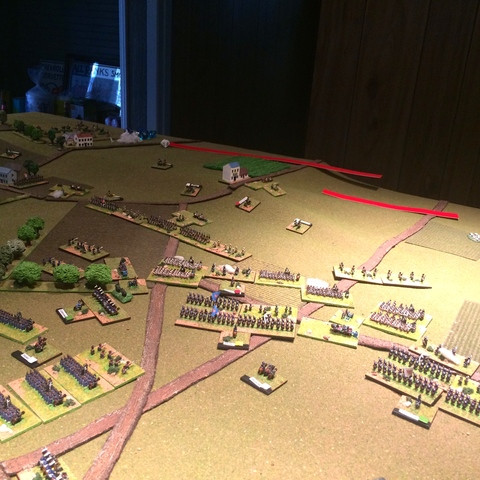 On my left there was lots of stuff going on in Plancenoit, but I didn’t have time to really follow it. 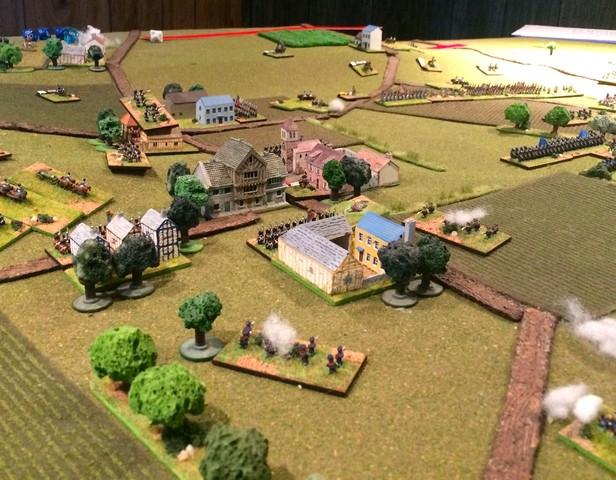 Glenn’s rules will be published by Baccus under the title of Ruse de Guerre, and will be marketed as American Revolution to War of 1812.  Glenn and his chums think they work well enough for Napoleonic battles.   For my part I would probably use Blucher for a battle this size,  but I can see the use of a group sticking to one set of rules to give them a common gaming language.   It was certainly grand to play in a large battle at a small scale, and to get a sense of the strategic problems Napoleon faced in trying to halt the Prussians at Plancenot.