We have a new game of Diplomacy under way and that means, a new issue of The Daily Dissembler!  MP+

We make sense of a complicated, far-off world so you, dear reader, can enjoy the Gilded Age.

Washington, DC:
Readers seeking to plan their summer excursions to the Continent are perturbed by rumours of war that are emanating from all the great capitals.  Unconfirmed reports say that several ministries of war have called in extra staff to begin drafting mobilization and call up orders. Our correspondents in London, Berlin and St. Petersburg all report heightened activity in the foreign ministries and among the diplomatic missions.  Indeed, our Man on the Spot, Ernest Harrington, has sent us an exclusive cable on the situation, which we print in its entirety below.
This week both the Cunard and White Star lines both issued statements saying that they anticipated no inconvenience to their passengers, and that all sailings for the next two months will continue as scheduled.   In a statement released last Sunday, the Secretary of State, Mr. Adelphius Vinsack, called upon all European heads of state to refrain from incendiary statements that can only stoke further tensions.  “I am disturbed that responsible monarchs are making statements calling for “ramshackle empires” to be plundered and seized.  Europe is not a particularly succulent fowl to be carved up.  Which reminds me, I am happy to preside over peace talks, provided that they are to be held at some salubrious venue.  Biarritz is very nice in the spring.” 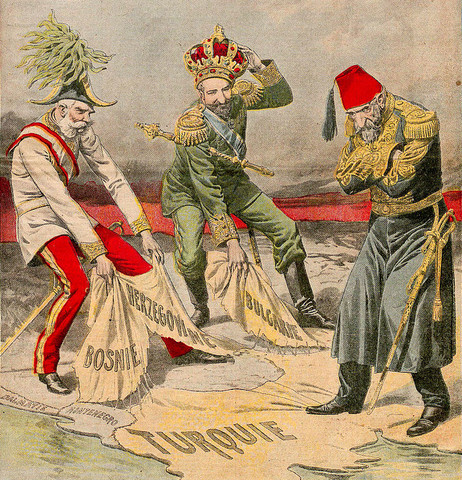 Is this the future of the “ramshackle empires”of Europe?  This journal hopes not!
KAISER ISSUES NAVAL CHALLENGE 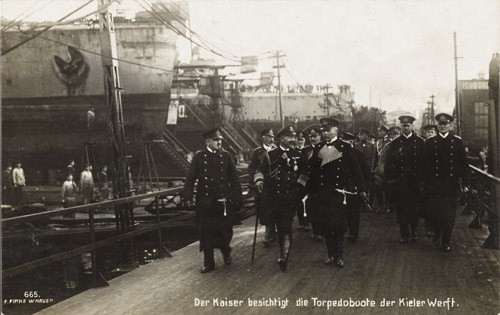 The Kaiser in Kiel

His Imperial Majesty today attended the laying down ceremony of a new battleship, reported to be faster and stronger than any currently employed in the world.  This new ship is to be named Kaiserin Friedrich in honour of his recently deceased mother (and through her of his grandmother Queen Victoria).

“In so naming this great vessel we acknowledge the bringing together of two strands: for modern Germany is already acknowledged to be the heir of Frederich Der Grosse’s military supremacy; now we stake out that naval supremacy formerly claimed by Britannia.  There are representatives of many navies here:  I say to them ‘Report back to your Admiralties that you have seen something new here today.  You have seen the might of the Imperial German Navy reforged!’” 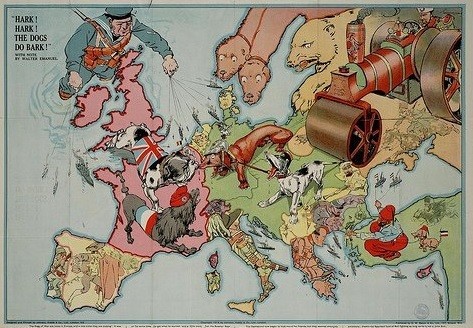 There is a strange game played by Foreign Correspondents.  To better inform their readers, they try to guess where the next European Confabulation will spring up.  Given the fragile state of the continent, there are many candidates for this hotspot.  Reporters from rival papers have placed themselves in Athens, Trieste or Warsaw.  I am here in Brussels.  Miss Amelia Roosevelt is, I believe, in Llandrindod Wells.

Belgium is a gloomy place.  The streets are subdued.  The lights burn late in the Foreign Ministry as instructions are drafted to this tiny nation’s ambassadors.  Above all, the message is ‘Find a Protector!’   I am told that the diplomatic outlook has not been so grim since 1814.  England, France and Germany all hover in the wings.  Which will invade?  Which will hold back, claiming the other’s aggression as a casus belli?  The truth is that none of these Powers can be trusted to prevent an invasion.

Who, then, can the Belgians rely on?  There are wild rumours of Turks being seen patrolling the Ardenne Forest or Volga Rivermen plying the canals.  A more sensible alliance would be with Italy or Austria – each in a position to deter France or Germany.  Yet with no-one to threaten England’s borders, invasion seems certain.

Whatever happens, Your Man is On the Spot.

Ministry of Foreign Affairs of the Kingdom of Italy

Communique for the Period of Spring 1901

The current tensions racking Europe are forcing all the major powers to examine where their interests lie, Italy included.

The Balkan region is currently destablising all neighbouring kingdoms. If there is to be a carve up of this region between the major powers, Italy must be included. Her vital interests in the region must be protected against aggressive acquisitiveness of other powers.

Some nations are also not helping the current period of instability by communicating with the representatives of the Kingdom of Italy in a manner which could only be charitably described as high-handed. While we are a nation only recently united, we have a long and glorious history to reflect on and our honour will not stand further insult!

Italy extends the open hand of friendship to all Europe, but be warned; The open hand can easily turn into a mailed fist!

June's Military Manual on European Affairs - 1901 Edition
Your indispensable guide to military gossip and intrigue.This year has seen a phenomenal developments in the European Defence sector - here are some of the most important advances :-
Russia has announced an increase in it's defence spending and plans to create 5 new regiments of FEMALE line infantry - these brand new troops will also be undertaking special training in complex drill procedures that allow them all to fit inside one another. Also on the horizon Russia has announced new maneuvres planned for the Summer involving occupying the Black Sea, Galicia, Prussia and Sweden.

Turkey has agreed a new deal with its uniform suppliers that will see the size of its shoes increase by 3ft in length and also get even more pointy. This 'modernisation' is said to be very popular with the troops who think it will greatly help them when marching. They also have maneuvres planned for the Black Sea, which could lead to problems with the Russians, and also for Bulgaria and Armenia.
Italy's Armaments Minister gave a press conference recently showcasing the latest technology within their forces - they have now managed to train their cavalry to walk-trot-canter and gallop forwards, as well as the Italian tradition of backwards. The Regia Marina also announced an expedition to North Africa alongside the army's planned trip to Tyrol and the South of France.
Austria-Hungary's Defence Minister has revealed exciting new developments for their defence plan. He said "We have decided to stop waiting for our opponents to get to Vienna before we defeat them - this revolutionary idea will hopefully mean that we can actually have an agricultural and industrial economy without them being periodically destroyed by invading nations". He also told of military exercises in Tyrolia and Serbia alongside the creation of a regiment of 'Gondola' borne infantry - their use as yet unspecified.

Germany has announced a change of its ration policy with regard to its military. This marks a change from the longstanding idea of 'live of the land' and now its troops will be able to feast on 3 Wurst, and a pint of Sauerkraut a day. This is said to be hugely popular with the rank and file. In similar news, they also announced a 500% increase in the military's use of toilet paper. Alongside these changes, summer drills were announced for Tyrolia, the Low Countries and Denmark.
France has had a difficult year for its military following the crippling attack on its main white flag factory. Since then it has bounced back and has recently announced a huge increase in recruitment, with many volunteers being apparently drawn by the promise of good meals. The Defence Procurement minister has also announced a new 10,000 Franc contract with a small food supplier for frogs legs and snails. The French top brass has also announced a summer excursion to Iberia and to North Italy and the Low Countries, although analysts say that this may be beyond the resources of the still recovering French Military.

England has broken with its longstanding tradition of preferring to pick on Colonial nations this year and has thrown itself into European affairs. The Chief of the Imperial General Staff announced great expansions in the Catering Corps allowing for roast beef to be served every lunch and that tea ration to go up from 1 to 5 gallons of tea a day. Coupled with this, the Navy announced planned trips to Iberia, Norway and the Coast of France.