There was a lot of Longstreet this weekend.  Before some friends came by for a game Saturday night, I had a chance to finish the battle I’ve been describing here and here.

Below, CSA General Pinckney tries to consolidate his position against the advancing enemy.  The 14th Arkansas is ordered to hold and buy time and so volleys into the advancing 33rd and 31st Wisconsin. 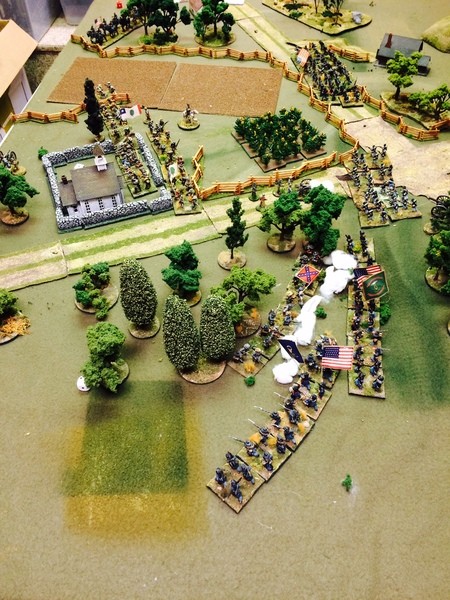 But does no damage and is charged by both the Union regiments.   With over ten bases charging, that earns Col. Schotz an Epic Point. 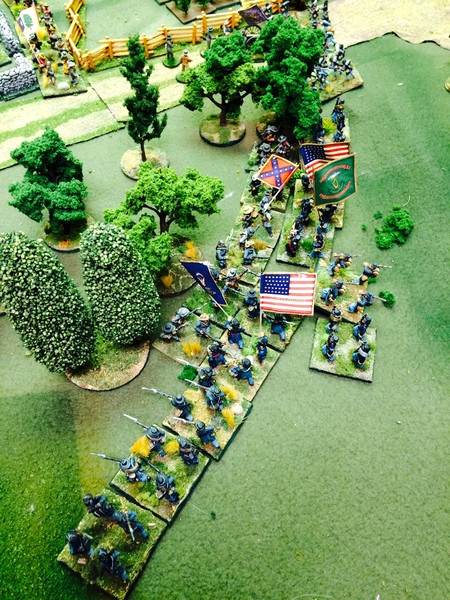 In the same Charge Phase, the 11th Ohio charges and overruns the isolated Napoleon section of the Little Rock Artillery.  Unsupported guns have little chance of winning hand to hand combat against infantry in Longstreet. 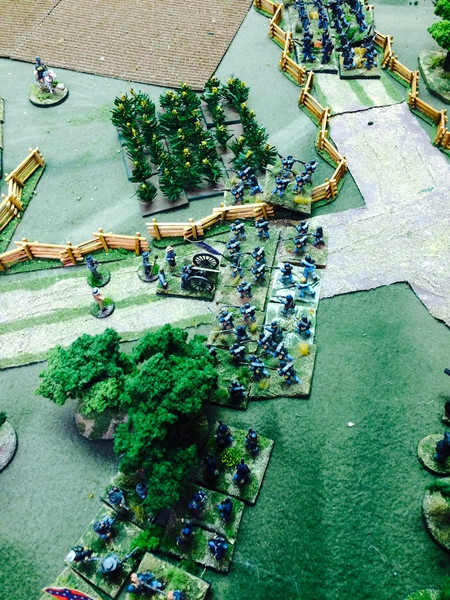 “Git along, secesh!”  Sullen prisoners are herded to the year.  These are some of my favourite figures, Perry sculpts from the Wargames Foundry range. 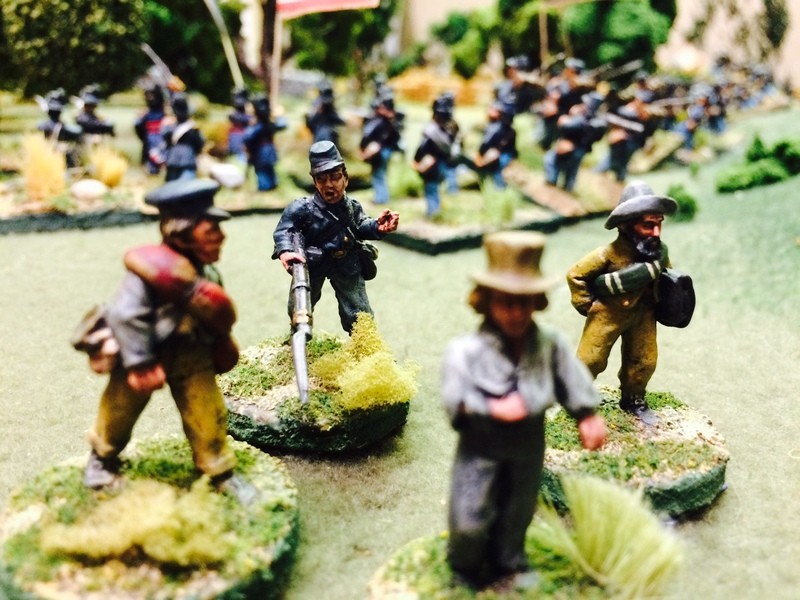 Confederate turn.  14th Arkansas on the lower left has been thrown out of the woods but reforms and anchors its left flank on the 42nd Mississippi which has by now mostly completed its transit from the Rebel left wing. 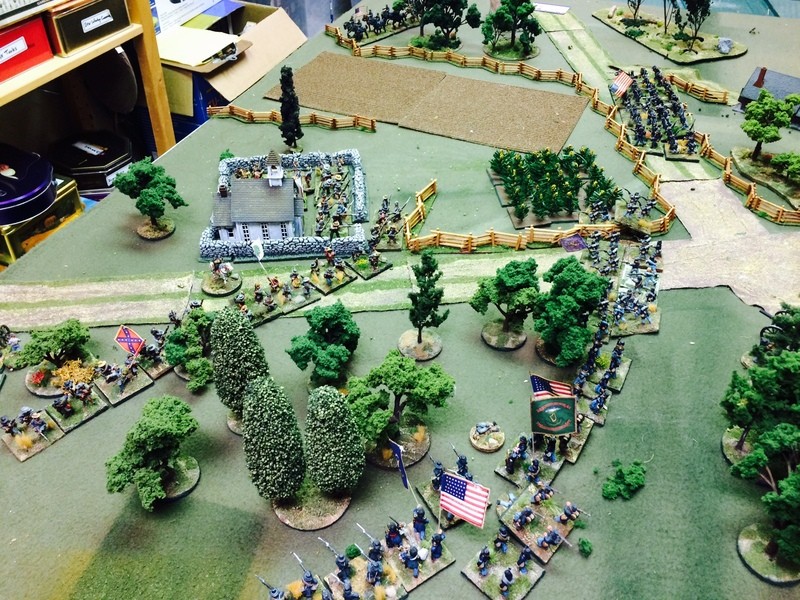 The 39th Mississippi has completed its fallback and now adopts a line formation conforming to the stone fence.  I gave them a Hero, Major Thaddeus Lamont, who exhorts his men to hold firm with some vigorous hat waving.   Heroes in Longstreet  give extra dice to units in hand to hand combat. 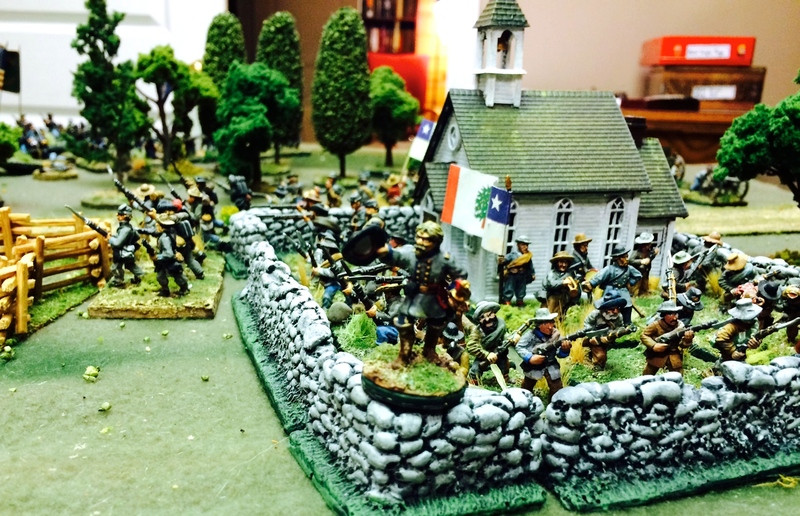 Because of the Union charges, there hasn’t been a lot of opportunity for the rest of Schotz’s brigade to move.  Now the rookies of the 23rd Michigan advance on the church.  At the bottom right, the 5th Kansas rides up to the fence line and ponders what to do. 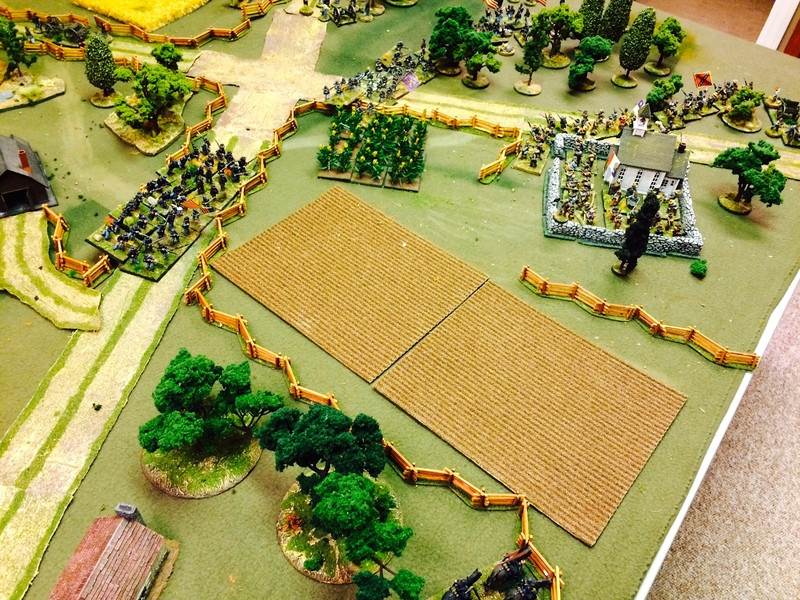 Rebel position is firming up.  The 14th Arkansas and 42nd Mississippi guard the right flank of Ebeneezer Church, while the surviving section of the Little Rock Arty rides into position on the right of the 14th (note again the invisible horses of the limber team). 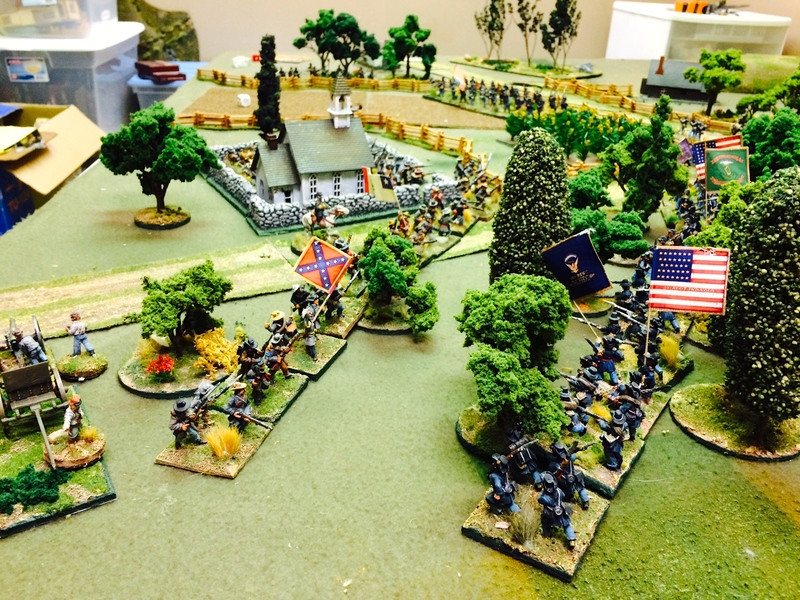 5th Kansas cavalry dismount at the fence line and look menacing along with the advancing Michiganders. 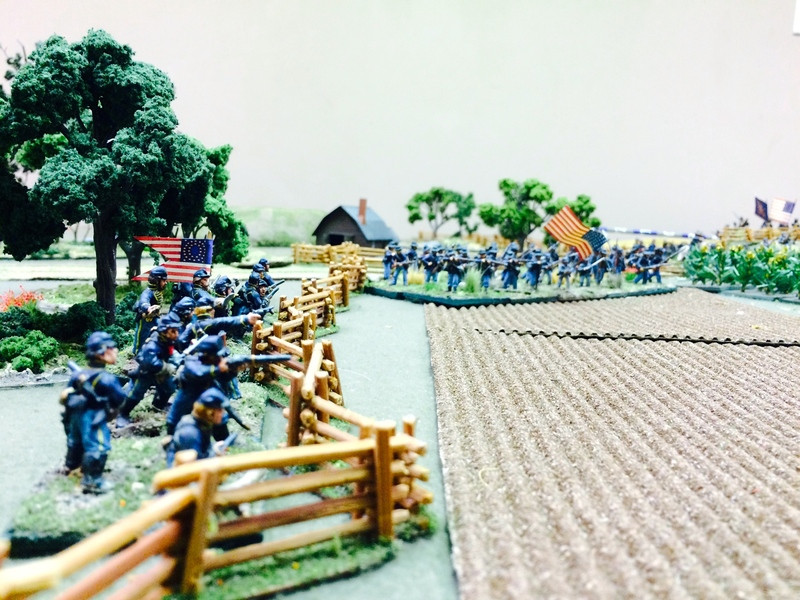 But the sturdy defenders of Ebeenezer Church do not appear to be fazed. 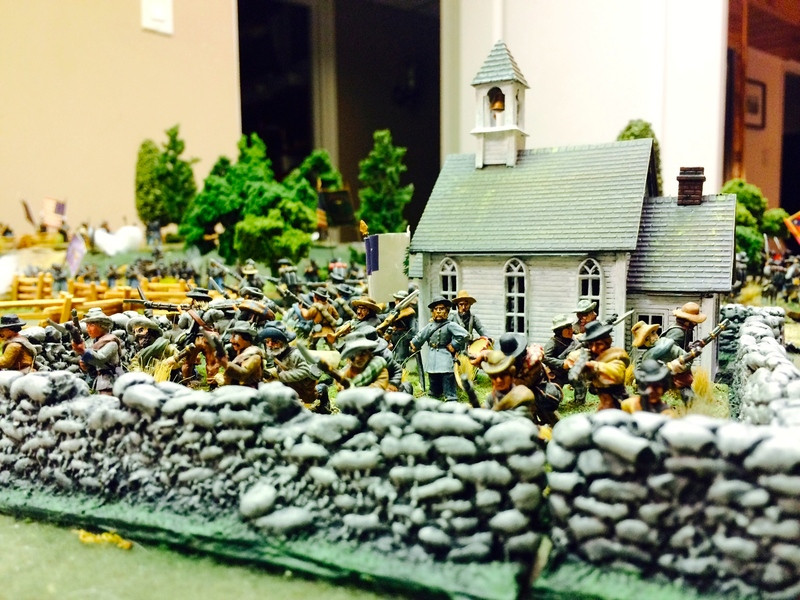 Little Rock gunners open up in support of the Arkansans and slowly the 31st Wisconsin is being whittled down. 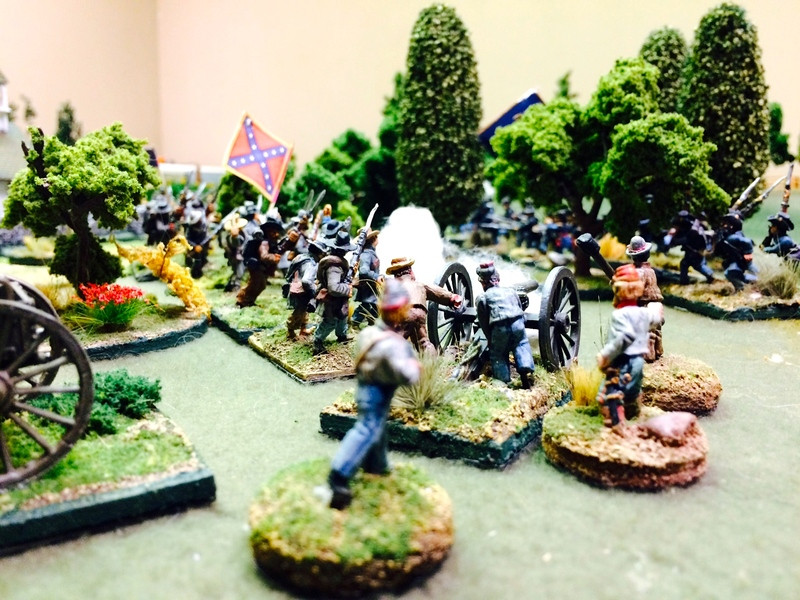 Schotz has a card that allows units to fire and then charge, which they can’t normally do.    The 31st on the left and the 33rd on the right fire, but since they are shooting through woods it is Skirmish fire and not terribly effective. 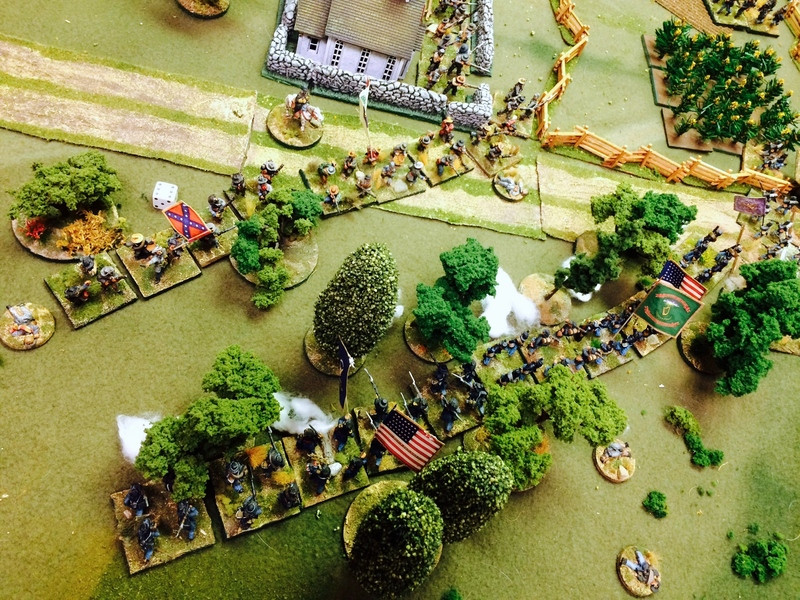 But, the CSA plays an interrupt card and negates the Union attack.  Boo! 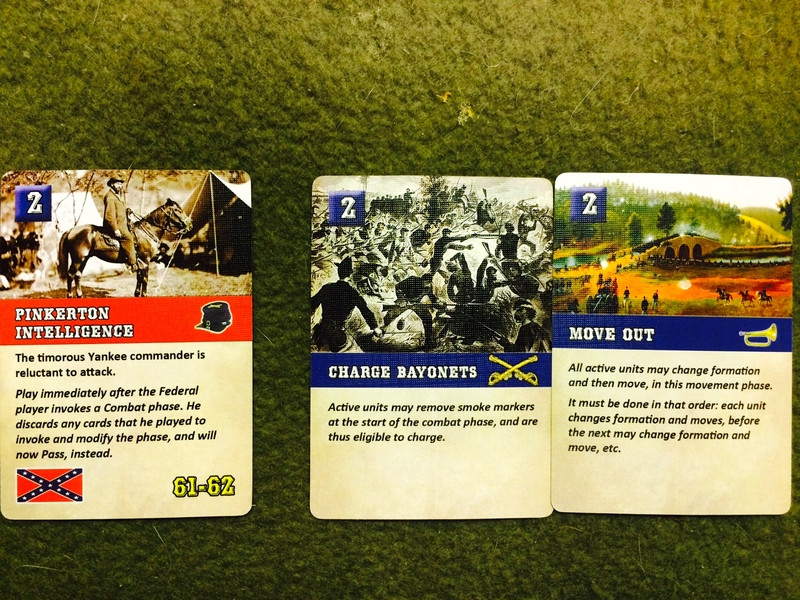 Union troops have to stand and take it while the Confederate reinforcements finally arrive and ride around the Wisconsin flank. 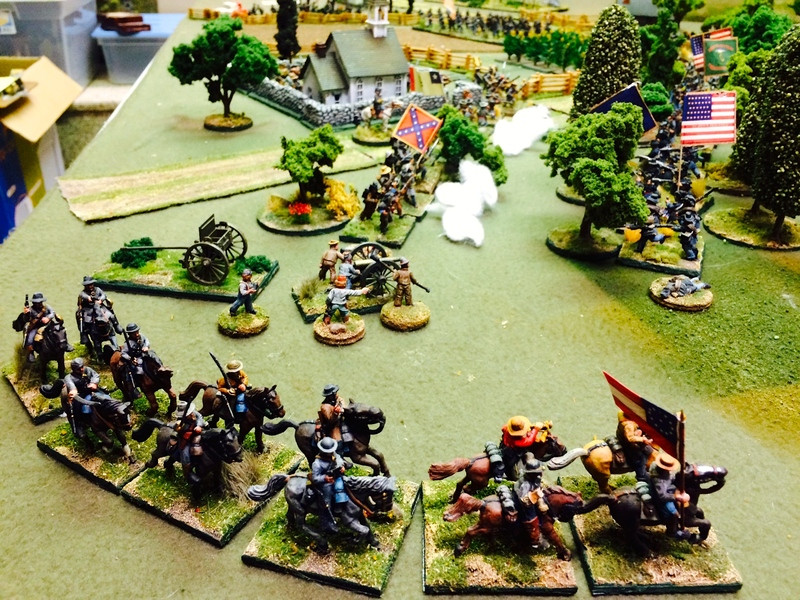 And keep riding.  The 31st Wisconsin, having lost half its strength, falls back to keep from being flanked, while the 33rd Wisconsin decides the best thing to do is charge.  It pushes the 42nd Mississippi back. 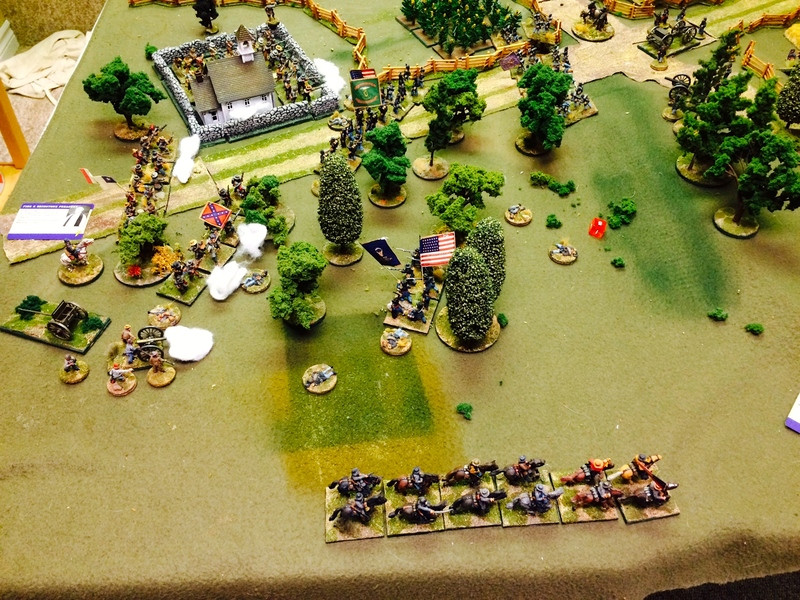 Only to take accurate fire from the 39th Mississippi holding Ebeenezer Church. 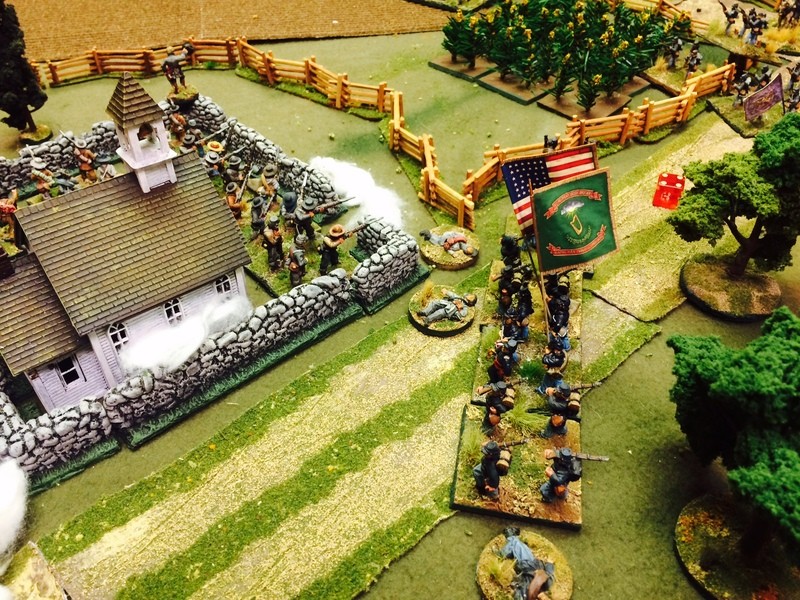 Things are not looking good for Schotz on his left.  Canister fire from the LRA continues to shred the 31st Wisconsin. 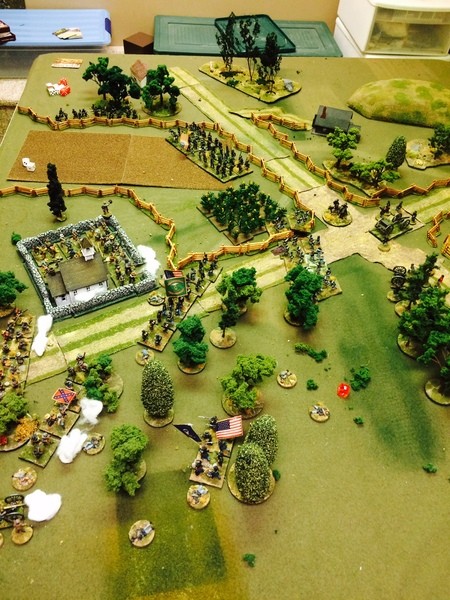 Union plays another interrupt card, Confusion, and moves the CSA cavalry further along the Union flank and out of harm’s way. 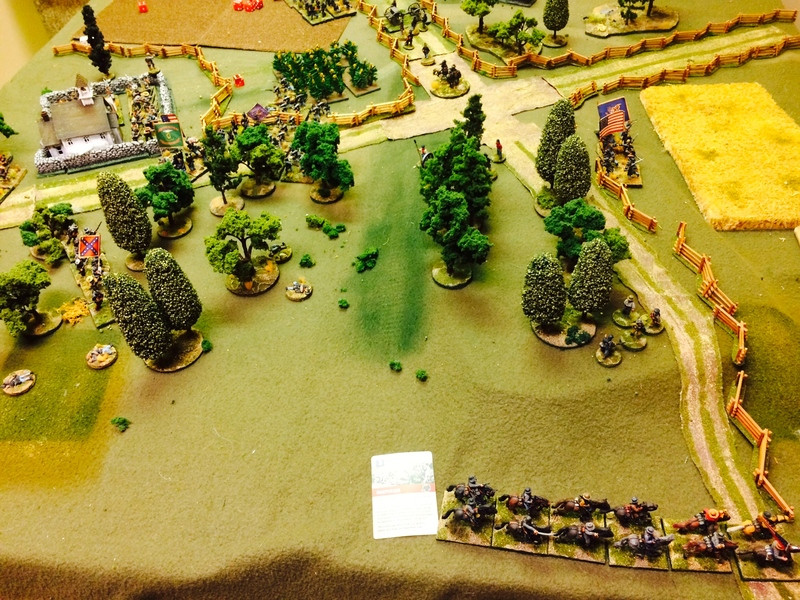 With time running out, Schotz throws his greenhorns of the 11th Ohio at the walls of the church in a gallant charge, but it’s not enough.  The Union troops are thrown back.   Schotz regretfully decides that his brigade has done all that can be done, and abandons further efforts to capture the church. 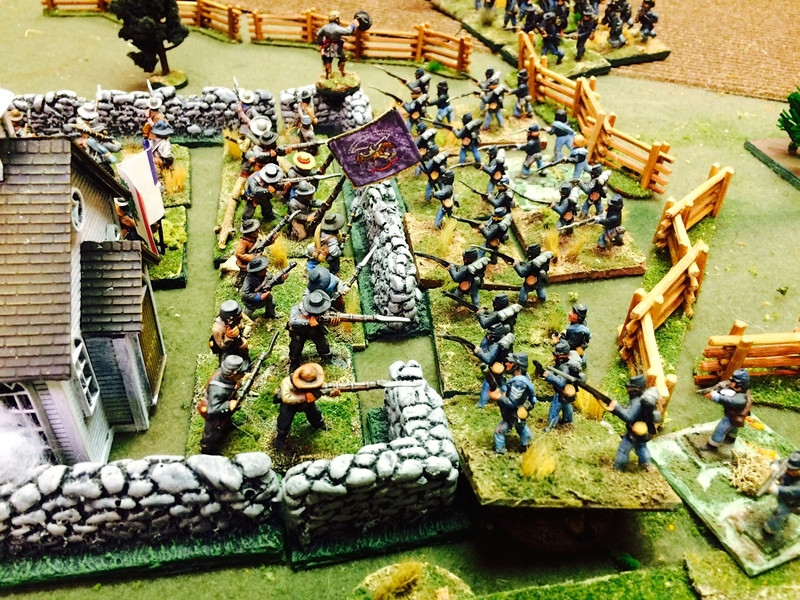 Schotz has now fought two battles since the war began, and has lost both.   His attacks on the church were largely uncoordinated, and he failed to use his supporting artillery to best effect.  Two of his regiments failed to get into the fight at all, and his veterans suffered badly.

In the following  months, his brigade rests and refits.  Using the Longstreet campaign rules, the brigade now looks like this.

32nd Wisconsin - disbanded and merged with the 31st and 33rd.

33rd Wisconsin - Seasoned Veterans, 5 stands.  The 33rd gets the benefit of now being considered Old Reliables, and is immune to the Confusion and Old Rivals interrupt cards in future battles.

Finally to bring the brigade up to the requisite 40 stands, the brigade gets 14 stands of reinforcements:

While few are left of the original volunteers from German and Irish Milwaukee, the brigade is ready for future battles to preserve the Union and end succession.