Here’s another Longstreet AAR from the weekend.  The last three posts here were about a solo game, but on Saturday night Stephen from the games club and his friend Ray came over to the house and we actually christened the games room with a H2H game.  It’s a small room, so it was a little awkward the three of us shuffling around the table trying not to touch each other.   Figures from my collection.

I’m ambivalent about river crossing scenarios, since they produce games based on attrition rather than maneuver., but that’s what we rolled from the list of scenarios in the Longstreet rule book: #10, River Crossing. We rolled for the year and got 1861, so since the card deck favours the CSA in the early war, we gave the Union more troops and more guns and made them attack.  Stephen drew the Union straw.  Ray had four fords to defend (marked with sand in the photo below), two on his left where the stream makes a 90 degree turn, and one on either side of his centre.   Other than the fords, the stream is impassable.  Ray decided to cover all of the fords, living one regiment as a reserve in the woods on his left flank.

Stephen’s Union setup is on the far edge of the board, within the boundary area defined by the red dice.  Since he has a nasty chunk of woods bisecting a third of his deployment area, he decided to use it to his advantage by screening the approach of three of his attacking regiments from the two sections of Napoleons that Ray placed in the centre of his line. 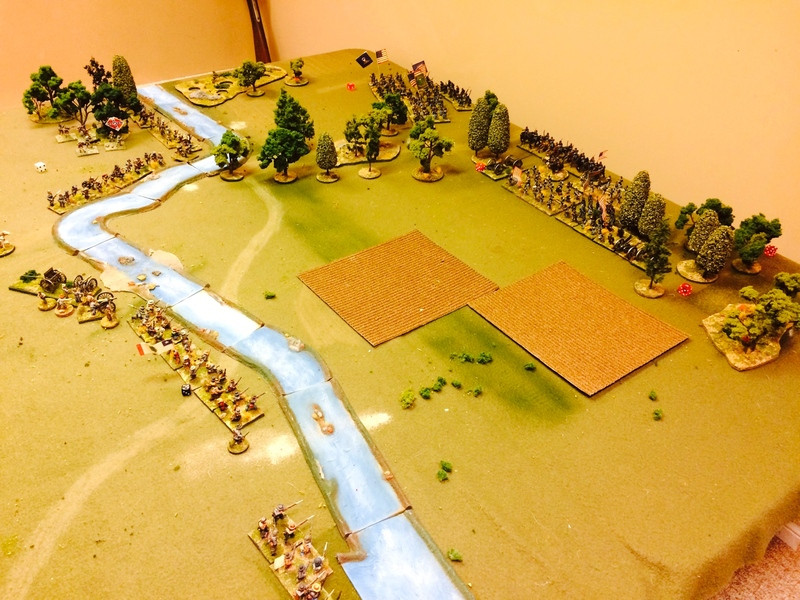 Stephen approaches everywhere, without waiting to use his four rifled guns to bombard the rebs first. 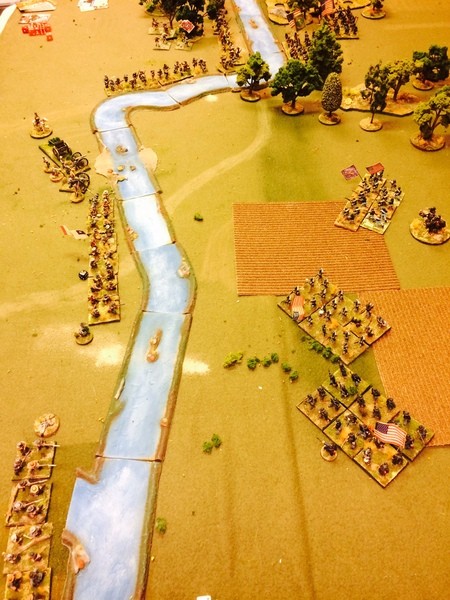 Since one of his four fords isn’t being threatened, Ray marches forward, not caring for that gun on his left flank.  Stephen rushes his cavalry reserve over to check them. 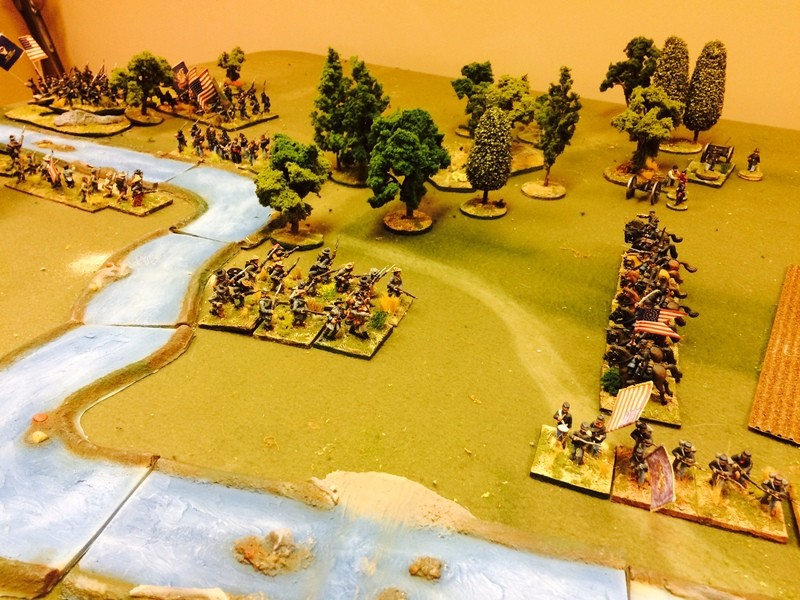 But sir, my hands are empty because Mike hasn’t ordered me a flag yet! 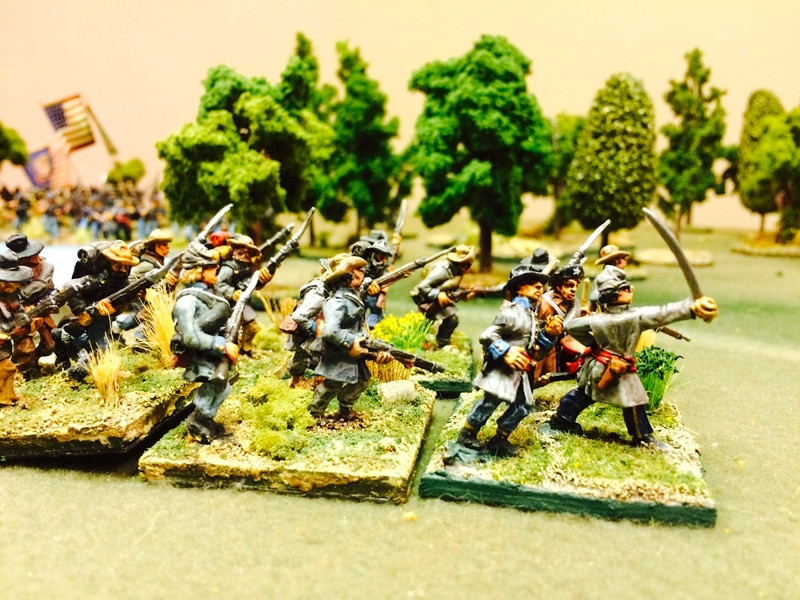 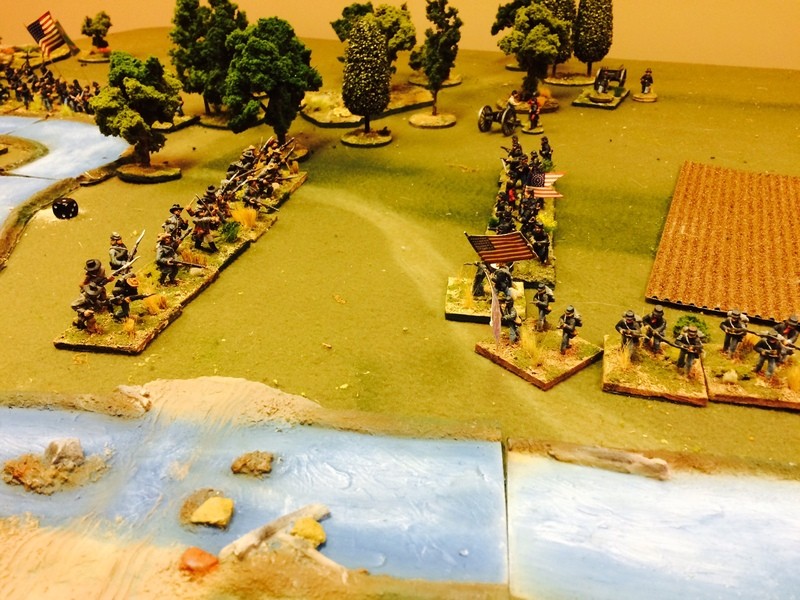 Stephen has two problems.  First, win the firefight.  Second, he can’t cross the ford in line, he has to change formation in line and charge at two significant disadvantages (fighting in difficult terrain and only fighting with the first two ranks of his column). 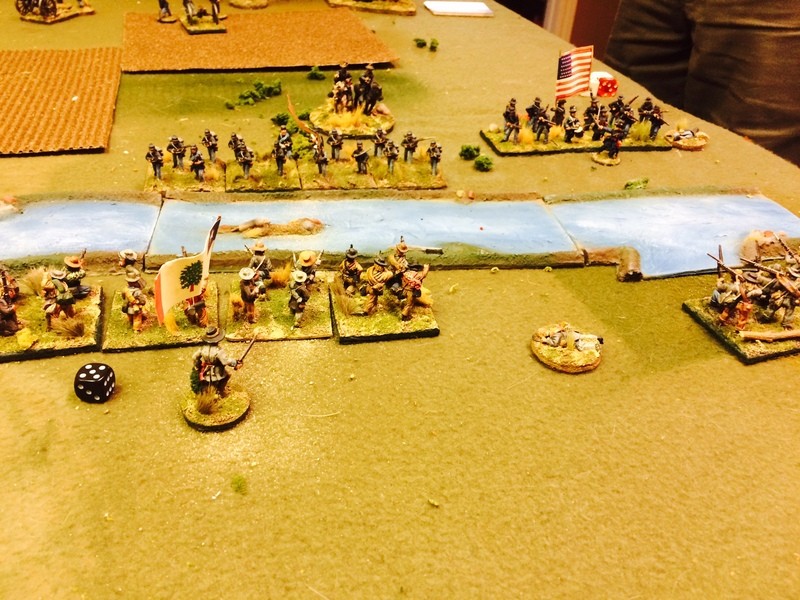 But numbers tell, the feb defenders on the right melt away after a flurry of cards and firing and Stephen is able to cross one regiment as the clock runs out. Here my ancient Minifigs figures get their moment of glory. 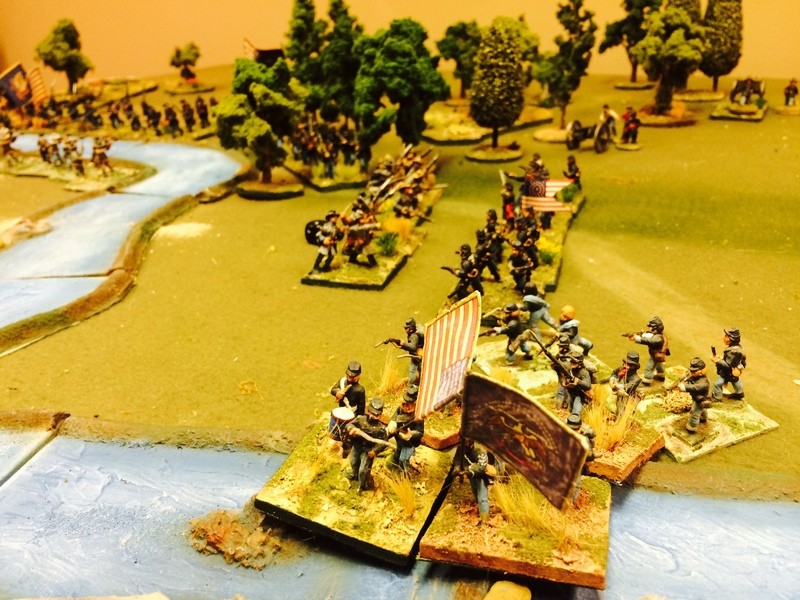 We had a good fight, and a good game.  It was too easy to teach the basics of the game in ten minutes, and despite never having played it before, Ray and Stephen had picked up the subtleties of the card play.  Several over chaps in the local club have the rules and their own figures, and I hope that at some point we can pool our figures.   With four decks of cards we could have a very interesting multiplayer game.