In my last post here, I said I was celebrating the anniversary of Frederick the Great’s victory over the Austrians at Leuthen.  I’ve had a chance to play it through once now, and it’s a terrific game, though I suspect it is far more entertaining as a two player game than when played solitaire, and I’ll come back to that in a minute.

Leuthen is a design from Victory Point Games, a company that I’ve really enjoyed getting to know in the last few years.  They have an eclectic range of games, made to very high graphic and material standards.   One of the things I like about VPG are their jigsaw cut hard mounted maps and their thick, laser-cut, beautifully printed counters, so just setting up and playing a VPG game is very satisfying visual and physical experience.  For Leuthen they recruited Frank Chadwick, a legendary game designer associated with one of my favourite old school companies, Games Designers Workshop who has won the Charles Roberts award three times.  I didn’t know until now that he is also a best-selling SF writer, with a  series of novels set in his Space 1889 universe.

The box art describes Leuthen as a game for ages 13 and up, with a complexity rating of 3 out of nine and a solitaire suitability of 5 out of 9 (which I think is generously high), and suggests that the game can be played in 40 minutes.  Certainly it could be explained and played to a conclusion in two hours, I think.

One of the design problems for a war-game of Leuthen is that Frederick’s Prussians were able to surprise a larger but strung out Austrian army and defeat it in detail.  Chadwick solves that problem with two sided counters, which hide a unit’s actual strength and identity until it comes into contact with an enemy unit.   Also in the mix is a large number of Dummy counters for the Prussians, and a few for the Austrians.  The Austrian player sets up first, his units all face down (you can see below that the yellow Austrian counters with the eagle and bayonets are not yet revealed).  The Prussian then sets up his force, also with his units face down. so the Austrian player doesn’t know where the actual weight of the attack is coming from.  The Prussian player moves first and has just six turns to win.  I don’t know a lot about the OOBs of the two armies, but my sense is that the game is set at the brigade level, so if a player years to recreate the exploits of the Potsdamer Grenadiers, he will likely be disappointed.

I tried to make things interesting by setting up the Austrians somewhat randomly, putting the units on the map as required according to their three corps groupings, but mixing up the dummies within each corps and placing them randomly.  That didn’t work so well, as I ended up with two Austrian dummy counters holding the key town hex of Leuthen, so I quickly did some redistribution.   I put all the Prussian counters facing uo, using the dummy counters when I could to bump into the hidden Austrian counters and reveal them. 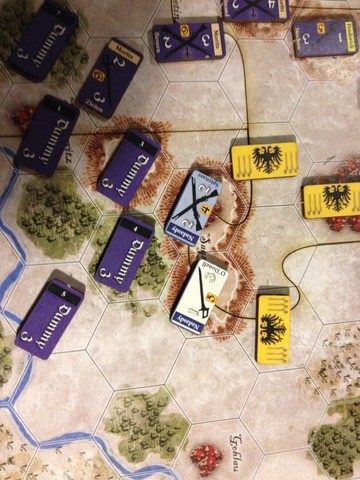 My strategy was to throw most of the Prussian weight at Leuthen and try to break the Austrian centre.   That worked fairly well.  While they are fewer than the Austrians, the Prussian units tend to have slightly higher combat and morale ratings, and more organic artillery, so they are more combat capable and rout less easily than the Austrians do.  The game uses a fairly standard ZOC system, and units have to pay a movement point to change facing at a rate of one movement point per hex side.  Since most units have a movement allowance of two, that forces you to think hard about facing, and to try as much as you can to protect a unit’s vulnerable flanks and rear.  For a fairly simply game, it does a good job of simulating the linear style of 18th century warfare. 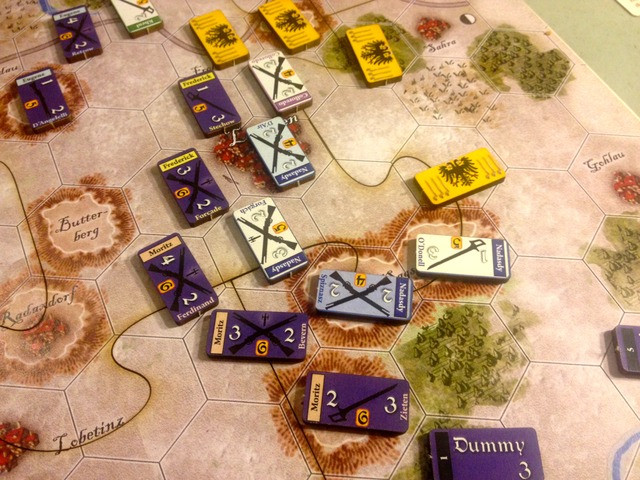 I liked the use of cards to add some variety and nuance to the game.  The Prussian player gets to hold a hand of three cards, and the Austrian gets a hand of two.  The effect is somewhat reminiscent of the Command and Colours system.  Here I used the “Mollendorf Finds A Way” card to allow the Prussian infantry to ignore the defensive terrain combat bonus of the Leuthen town hex, which allowed the Prussians to capture it. 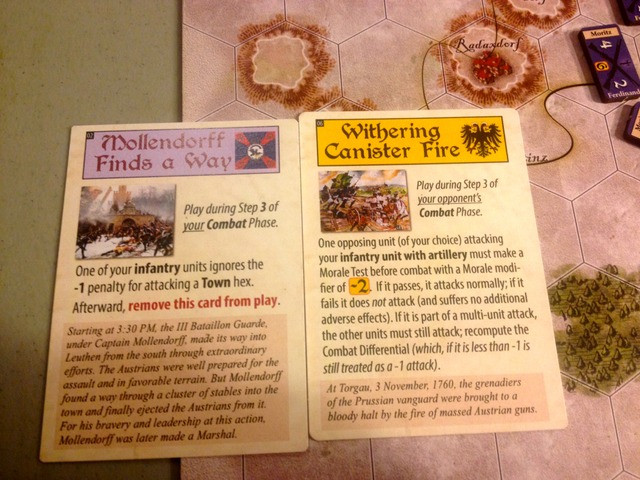 This photo isn’t very clear, but it does point to a key part of the game mechanics that is very clever.  Units are not eliminated or step reduced in combat, but if they are forced to retreat, depending on how bad the combat odds are, and what’s rolled, there is a chance they rout,  They can be rallied from rout, but every time that happens, the unit’s parent corps loses a morale point and the unit itself takes a permanent shaken counter.  So in this picture, the Austrian unit has a -1 to its combat value (on the left of the counter) and a -1to its morale (the number in yellow in the centre).  Here it’s being attacked by two Prussian units which is not good. 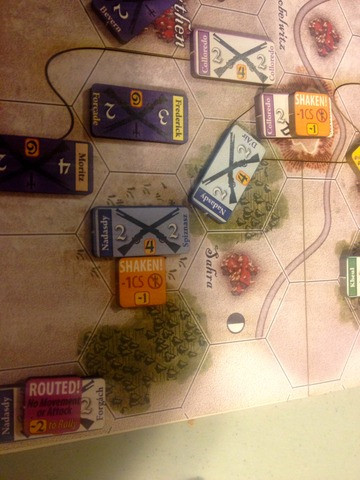 Here’s an example of how morale works at the corps level.  As the Prussians break through, more and more of the Austrian units are getting Shaken.  Here the Forgach unit of Nadasdy’s corps is shaken and on the edge of the map, with no where left to retreat.  If it retreats again, it is eliminated.  Beside it is another unit belong to Nadasdy’s corps, also shaken.  The Prussian Moritz unit is attacking Forgach. 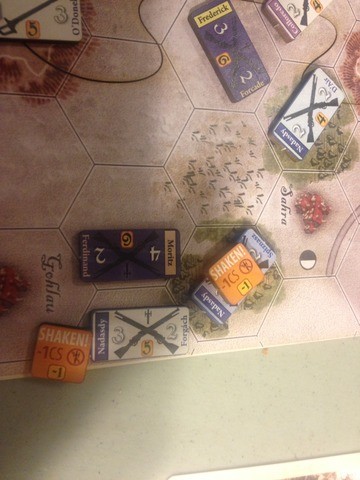 The Prussian attack is successful and the Forgach unit cannot retreat off the map without being eliminated.  Each retreat or elimination drops the corps’ morale by one point, and Nadasdy’s corps’ morale now hits zero, which means his corps us demoralized. 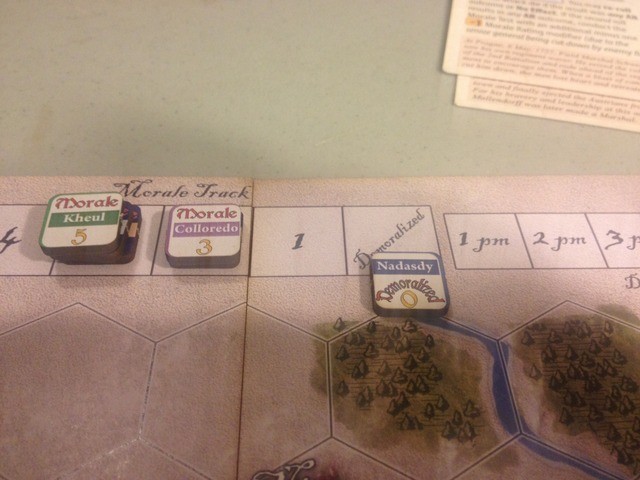 Corps demoralization is especially bad news, since all shaken units in a demoralized corps are removed from play.  Thus, in the above example, the Austrian Spiznasz infantry unit, also of Nadasdy’s corps, was shaken, and so it is also removed as are any other shaken units in that corps.  Any of Nadasdy’s units where are still steady now get a Shaken marker.   And it gets worse.  When a corps is shaken, the morale level of every other corps in that army is reduced by one, and if that takes a corps’ morale to zero, it too is demoralized, so the demoralization of one corps can cause a cascade event which can cause an army to unravel. 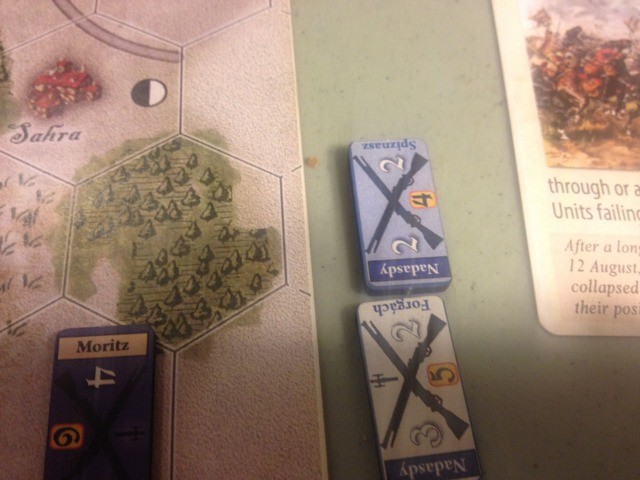 One thing you won’t find in the game is any command and control or unit activation rules. Chadwick’s designer notes argue that his approach instead is to give units low movement allowances, so once they are committed to combat, they are essentially committed until one side or another breaks, and so morale becomes a key part of the game system.

There aren’t a lot of paper and counter games of SYW battles, and this one is definitely worth getting at for fans of the period.  I think you’ll like the look and feel of the game, and you’ll find the challenges of hidden deployment and the fairly horrific consequences of corps demoralization to be interesting challenges to overcome.   The challenge for the Prussian player is to mass his small but superior force to maul the Austrians, while the Austrian player will want to husband his forces and commit then where he sees a chance to gang up on Prussian units.  Committing to low-odds counterattacks is a strategy of disaster for the Austrian.

The game’s rulebook promises that it is #1 in a series called Drums and Muskets, so let us hope there are more games in this series.

Blessings to your die rolls!  MP+