Those who follow Conrad Kinch's blog (which is everyone who's anyone, really) will have noticed a post in which he mentioned an experiment we have been conducting using Apple's FaceTime technology. In our first session, we found that by using our iPhones and FaceTime we could have a conversation, and see details of a wargaming table with sufficient detail to have a game. During that first session, CK was able to explain the basics of GMT's Command and Colors Napoleonics. The beauty of it was that, other than what we paid for our gadgets, the connection was free. FaceTime does not use a phone line to connect, so if you both parties have a wifi connection, you're good to go.


Last night, despite a brutal seven hour time difference (Alberta, Canada vs Dublin, Ireland) which CK gamely took on the chin, we tried phase two of the experiment and played a game of CC Nap, with CK's gaming table and figures as the battlefield. The scenario CK chose was Maida. Because CCNap is card driven and players activate select units by playing one of their cards each turn, there was the problem of how I could manage my hand without CK, who physically held the cards, from knowing what was in my hand. We solved the problem by CK holding up the cards to the camera, me writing the card details down at my end, then CK placing the cards face down, in a sequence numbered 1 to 5, on my side of the table. It worked quite well. The details on the cards were hard to see at tomes, but visible enough that I could compare what I could see with the downloaded rules. It was a bit squinty but it worked. 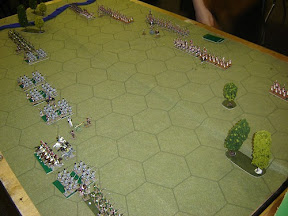 A shot of Kinch's gaming table from a previous setup of Maida, courtesy of Donogh McCarthy's blog.


The game itself was cracking. It was the first Napoleonics game I've played in ages and my tactics were guided by CK's kind coaching. Within an hour and a half we were able to obtain a result, a very narrow 4-3 French victory, with the French light cavalry covering themselves in glory. I quickly learned that simply pointing my pen at units on the screen of my iPad did no earthly good in showing CK what I meant. Fortunately CK uses a Hotz hex mat which made it simple for me to tell him how I wished to move my troops and to visualize ranges of fire. I am not sure how we would have managed had we been using a tape measure instead of a hex map.

So good stuff all around. As this sort of technology gets better and easier to use I think wargamers will use it more frequently as the internet allows us to find kindred spirits who are geographically removed from each other. The game was good, having a drink and a chat w CK afterwards (and meeting his cat, Sir Harry Flashman) was even better.