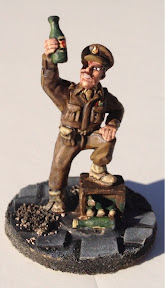 Here is the third of my first four Weird War 2 core personalities. The miniature is one the set of four currently marketed by Warlord as the "Christmas Truce" set. I believe the figures were initially conceived as a tribute to the four key personalities behind Too Fat Lardies. Perhaps because of that connection, the figures have tons of personality and a not so serious quality that makes then perfect for pulp gaming, 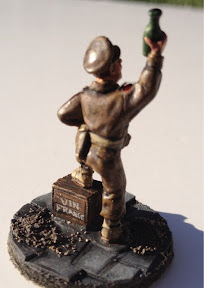 This fellow was so much fun to paint. As with Padre Mercer, I based him on flagstones, to make it look like he could be looting some dusty wine cellar, or maybe a ruined French chateau (hence the hint of rubble on the base). I gave him some medal ribbons on his battledress tunic, and a hint of a David Niven type moustache.

Because S Commando has been cobbled together, not all its members are as elite and upright as Captains Jarce and Mercer. Since qualified intelligence officers are hard to come by, S Commando ended up with Captain Richard Byrd, because, well, no one else wanted him.

Byrd, or "Dicky" Byrd as his cronies call him, took a degree in European History and Linguistics at Cambridge before the war, and thought it would be a cushy life to stay on as a don. He has a good mind and a flair for languages (he can speak five fluently, though his Finnish and Albanian are a bit rough) but he can't resist wine, women, or song. As a result he lost his position at Cambridge for gross moral turpitude, and then had an undistinguished series of posts at increasingly provincial public schools. His teaching career ended one morning when he awoke, quite drunk, and headed to class wearing only a mortarboard cap.

The Army gave him a refuge and he found himself in France in 1939 as in IntO in the BEF. The Phony War was great for him because half the chaps were squiffy most of the time and the girls were fab. Byrd wasn't so keen on the Blitzkrieg, however. In the retreat, he was given a lorry and a chateau of sensitive files to save. After a good bordeaux to steady his nerves from all the bloody shells and Stukas, he decided the files weren't that important, not compared to a collection of pre-1914 vintages he had assembled, and so took them instead.

At Dunkirk Byrd was arrested for desertion and theft, but in the chaotic final days of Dynamo he vanished. The story of his reappearance in Dover in a motor launch with a gaggle of orphans and two charming French nuns may just be a rumor, but it may explain why Byrd was not court martialled and was assigned to Project Alice instead. However, once he begins Commando training, he may long for the firing squad.