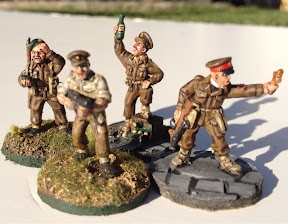 My Warlord Miniatures figure is done and he is the second of the four key members of S Commando to be introduced here. 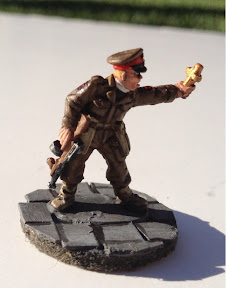 A quick word about the basing. I figured that the good padre would likely confront his vampiric nemesis in some crypt or castle dungeon, which called for flagstones. Not wanting to shell out for some expensive resin bases, I opted for cut squares of cardboard painted gray. Hopefully it doesn't look too cheesy. 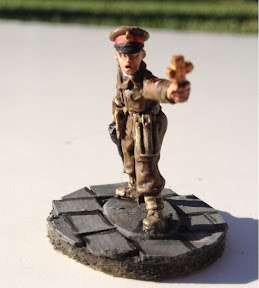 Warlord calls him "Major Terntadust" but on reflection I decided to give him a less corny name. In the backstory for is project, he is Captain (Honourary) the Rev'd. Dr. Tristram Mercer.

Before the War, Father Mercer was ordained in the Church of England, and did a doctorate in Reformation Studies at Tubingen University in Germany before taking the chair in Theology and Church History at St. Anselm's College.

It was while he was at St. Anselm's, on the eve of the abdication crisis of 1936, that Mercer stumbled on the existence of powerful vampires and their minions in Germany and England. Through a series of bloody murders at the College and in London, Mercer came to the attention of Chief Inspector Flayle of Scotland Yard and then of then Lt. Col. McAllister of the Secret Intelligence Service. Both men recognized Mercer's value as a fluent speaker of German, as a researcher, and as an ordained priest. In a series of bloody adventures, they succeeded in thwarting vampiric plans to retain Edward as a puppet king and routed the dark powers in England, but could not halt their rise in Nazi Germany.

Since 1936 Mercer continued as a priest and scholar at St. Anselm's while working under deep cover with SIS in a series of missions overseas. Now, under the cover that he has been called up as a chaplain to the Royal Army Service Corps, he will play an integral role in S Commando, the crack outfit being built by his friend, now Brigadier, McAllister.

Mercer is single, a shy and quiet man whose lectures are always packed. He is a competitive amateur distance runner, a passable cricketer and fast bowler, loves fly fishing, renaissance music and American films.

- Posted using BlogPress from my iPad