I don't know why most of my posts start with the words "I've finally" but they do and so does this one. I've finally finished a unit of Yankee dismounted cavalry, ready to do battle and buy time for the infantry to come up. The figures are 28mm Foundry - I'm a big fan of Foundry's ACW range, and I don't mind paying the big bucks for these figures on occasion. I would happily pay smaller bucks if someone made dismounted cavalry in plastic, and maybe the Perry Bros will follow up their ACW mounted cavalry with a dismount box. That would be awesome.

Flag is by GMB (Grahame Black). I am a fan of GMB and use his flags for all my ACW figures. 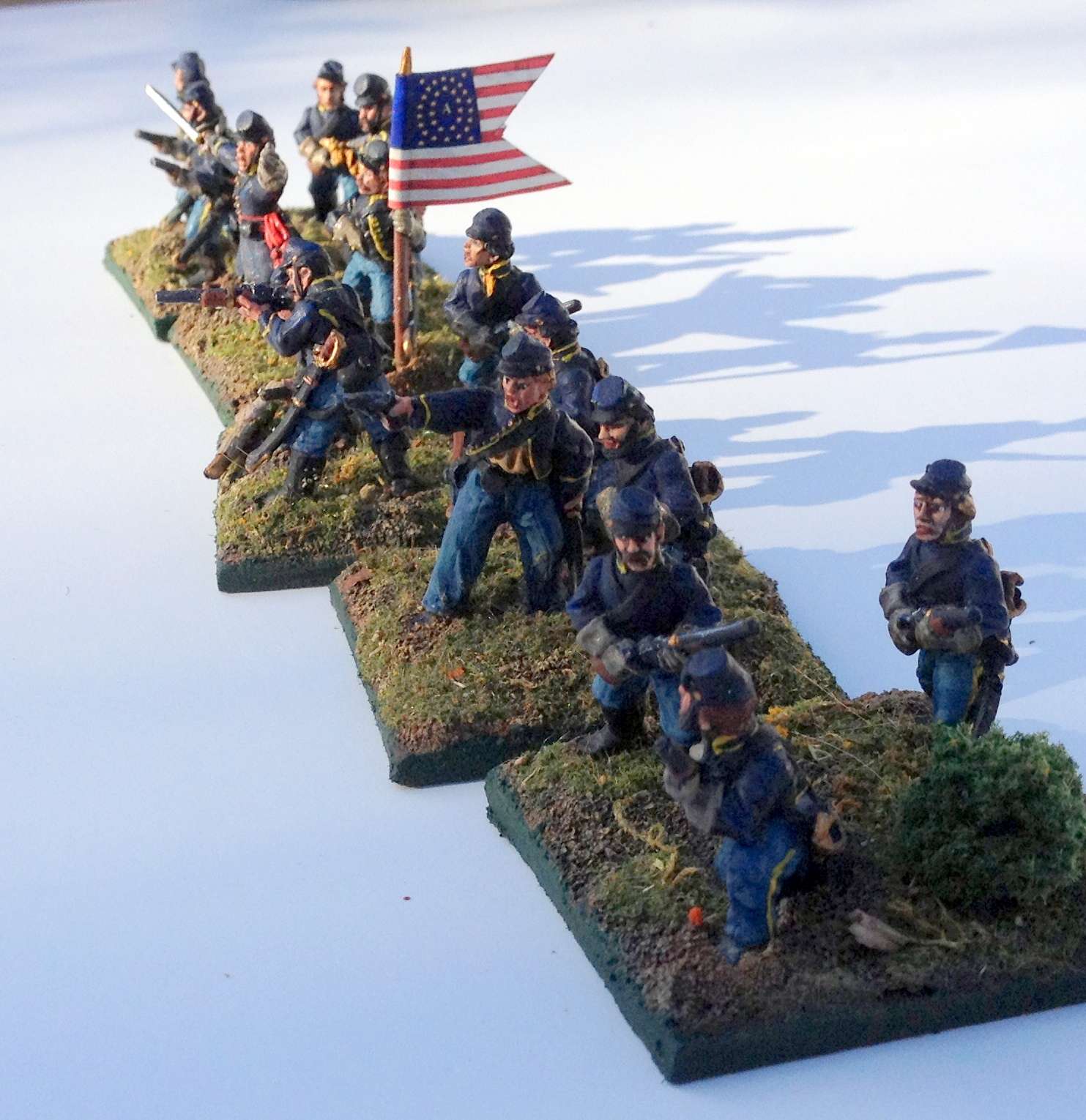 I would describe the painting job on these guys as being Good to "Meh". I used a black undercoat, a practice I am slowly getting away from. I tried to some blending with the faces that I don't think was helped by the dark undercoat. I also did a very rush job on these at first, as I was trying to achieve one of those miniature forum build deadlines that I totally missed, lost heart, and ended up putting these fellows on the back burner. I have since sworn off miniature forum build projects and competitions. 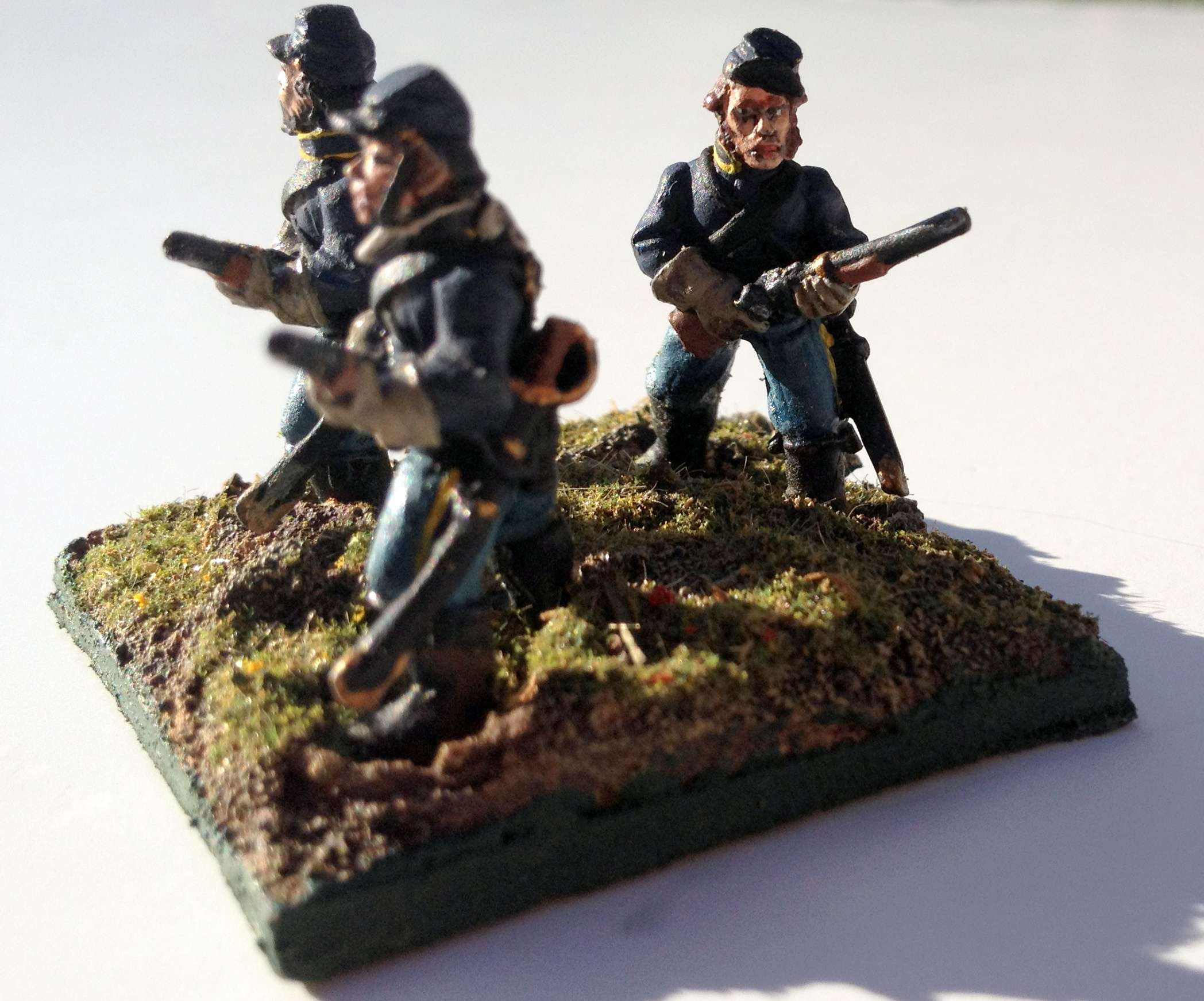 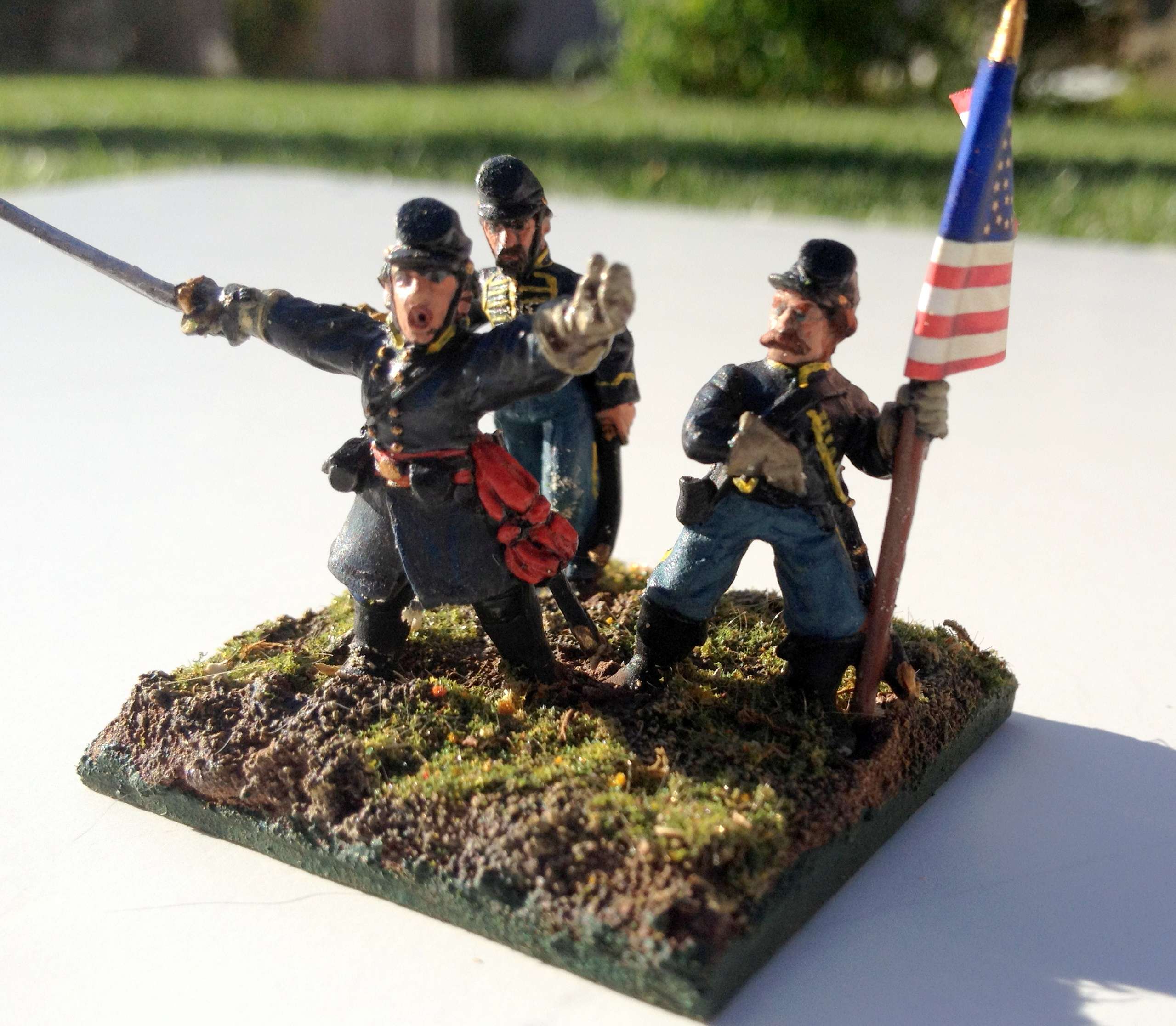 I love manufacturers who include a good solid flagbpole in their castings. It was a little short for the GMB flag, but it was much better than faffing about with superglue trying to get the copper wire to stay on. I have a bag of copper spears from North Star, and they make nice flag poles, but I am forever regluing them onto stands. 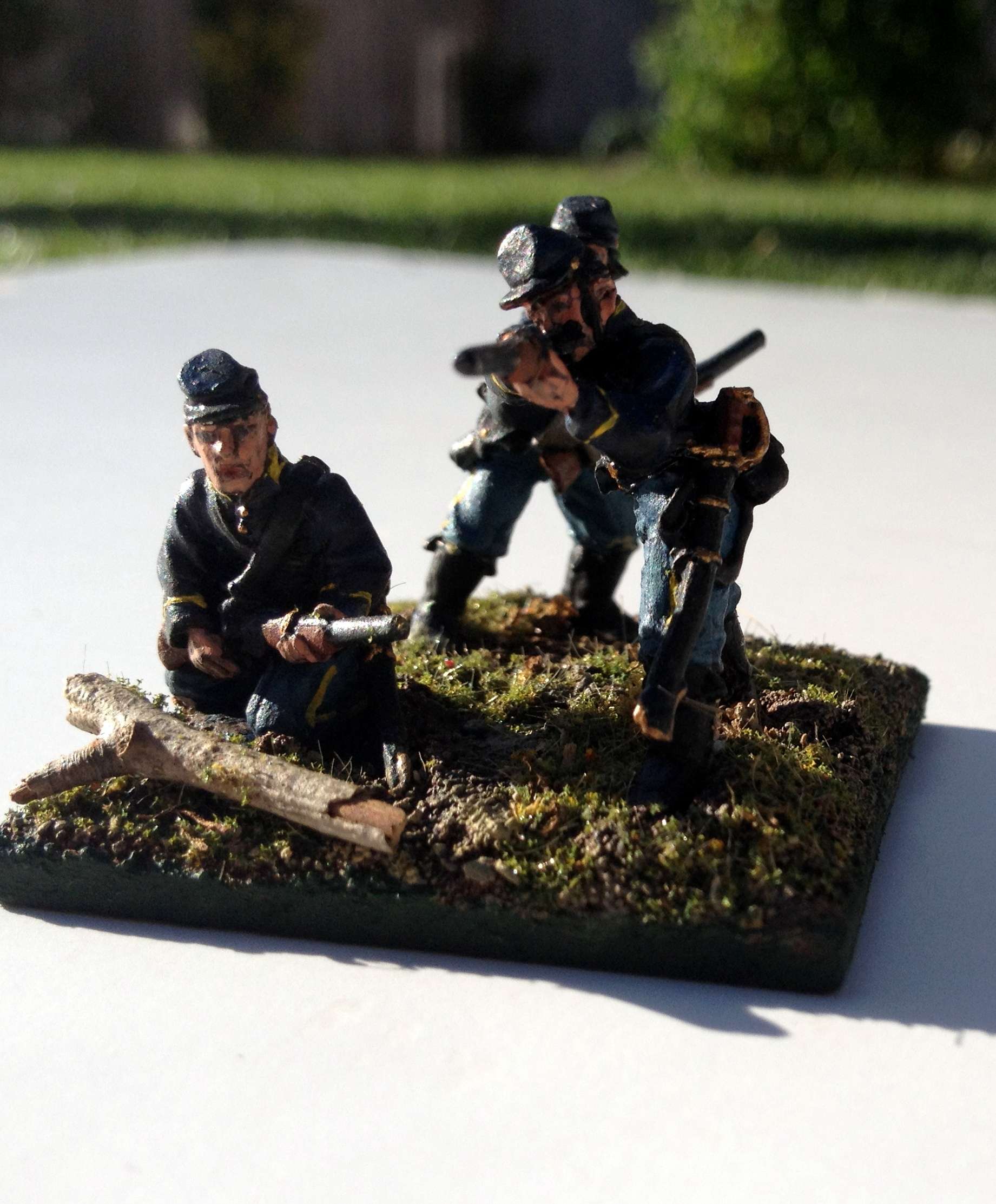 That little twig doesn't look like much cover, does it? I'm not terribly happy
with the faces on this group, as I've mentoned already, but here I think the bright sun washes out some of the details. The kneeling chap looks better in real life. I like the arrangement of poses here, this is perhaps my favourite stand. 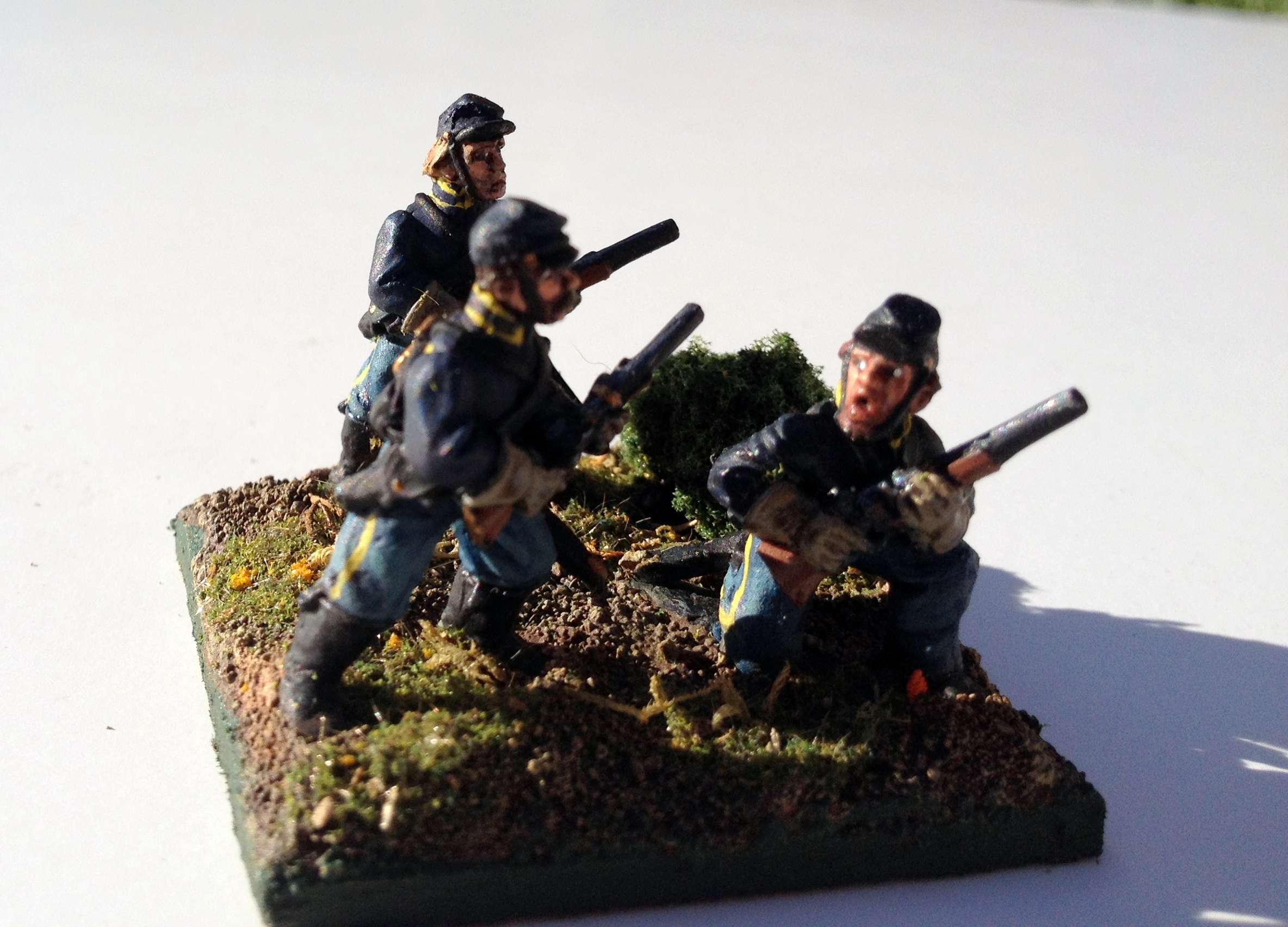 Here's another base I really like. The eyes on the kneeling figure ended up suggesting that he is looking over his shoulder, perhaps at the soldier coming up behind him. It's as if the kneeling fellow doesn't like what he's hearing: "Not falling back? Whaddya mean the boss says we ain't falling back?"


Cheers, and thanks for looking. Hope to show you these fellows on the gaming table soon. Mike