One of the great pleasures of my job working at CFB Suffield/British Army Training Unit Suffield is getting to meet my chaplain colleagues from the British Army. The UK padres I've met are all excellent, hard working fellows with difficult jobs. They come over with their units to train, live in fairly austere conditions far away from home for months at a time, minister to their soldiers while in the field, listen to their complaints, and sometimes help repair the damage when a squaddie goes into town on a tear and gets into trouble.

Last month I had several padres over to my house in Medicine Hat for a chance to rest and get away from camp. Several days later, I was having a brew with one of them, Kevin, chaplain to 2 Royal Tank Regiment, and he said "I noticed a wargaming magazine at your house last night. Do you wargame?". His tone was that of a fellow conspirator, and over the next hour we talked about our collections, favorite rules, and all the
other stuff that war gamers go on about. We checked our schedules, and found that it was possible to get a night of gaming in before Kevin went back to the UK.

Kevin wanted to try out The 3rd edition of Too Fat Lardies'I Ain't Been Shot Mum so we chose the third scenario, "Action at Galmanche". In this scenario, British infantry and armour have to push through SS infantry with a PAK 75 AT gun in support. We cut a platoon per side since I don't yet have enough figures for a company each, but kept the two British tank troops. The dice assigned me the Germans.

Kevin plans his cunning advance. My forces are woefully deployed in the buildings on the right, and in the woods and buildings in the centre. The woods above the road are impassable by tanks, so Kevin eiher has to swing around to my left or go through the hedgerows on the right. In fact he did both.

My pre-positioning was pretty dreadful. I scattered 1 Zug in the buildings on my left with the PAK forward in the woods, so no element could support another. 2 Zug was in the woods on my left, unable to support 1 Zug or the PAK, and the tank killers of Coy HQ were in the buildings on the left. I didn't notice the scenario rule allowing seven German elements to entrench, and I suffered badly from the opening British barrage. Kevin placed his stonks masterfully, and as a result my AT gun and most of 1 Zug were crippled with shock and/or down several soldiers before the game began.

Kevin's HQ came on first and my shock raddled AT crew were unable to hit them in their carriers before they dismounted.

Coy HQ in carriers advances. The PAK opens fire on them but note the red dice - 5 shock from the stonk! It misses.

The CSM, "Basher" Bishop, quickly got the Coy Vickers into action, killing the German big man with the PAK and driving off the crew. From there 1 platoon of his infantry descended on my infantry on my right, pinning and assaulting my lead two sections and bundling them off as easily as tossing out a drunk at closing time.

Kevin's infantry handly tosses my infantry out of the buildings on my right. One of Kevin's two tank troops swings around my right as his infantry consolidate. The second tank in the column is a Centaur proxying for a Sherman. I have one section left in the little cafe below the road, but it has 5 shock left over from the stonk.

I had a little more success when his 2 platoon wandered into the LOS of my 2 Zug. I caught his lead section moving in the open and mowed them down. 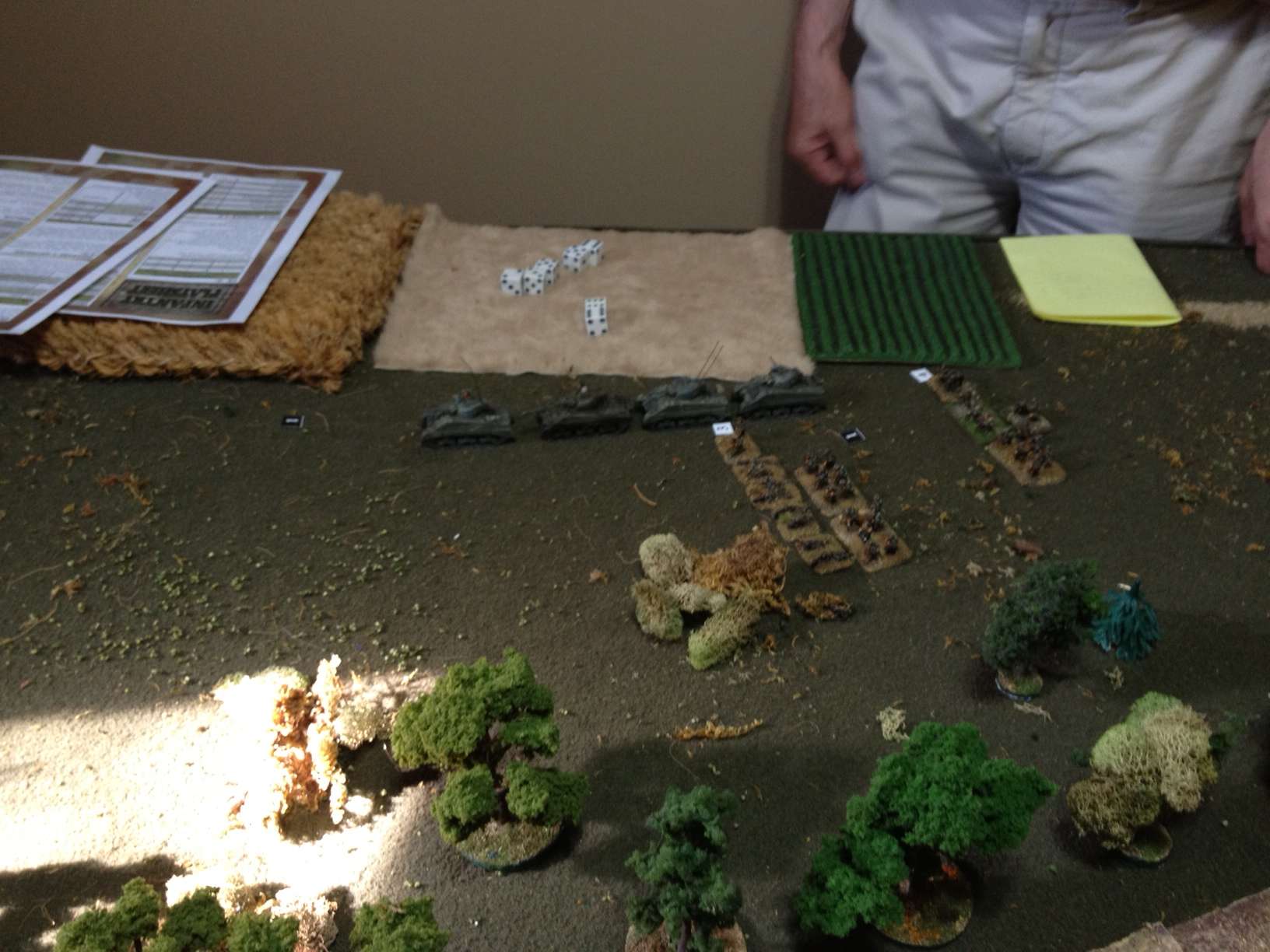 Kevin watches his second platoon cross my front, unaware that my PZ Grenadiers are lining up on his lead section. Ha!

My success was fleeting, however. By then he was moving his Coy support weapons up on the south side of d woods, behind 2 Zug, and engaging it from two sides. 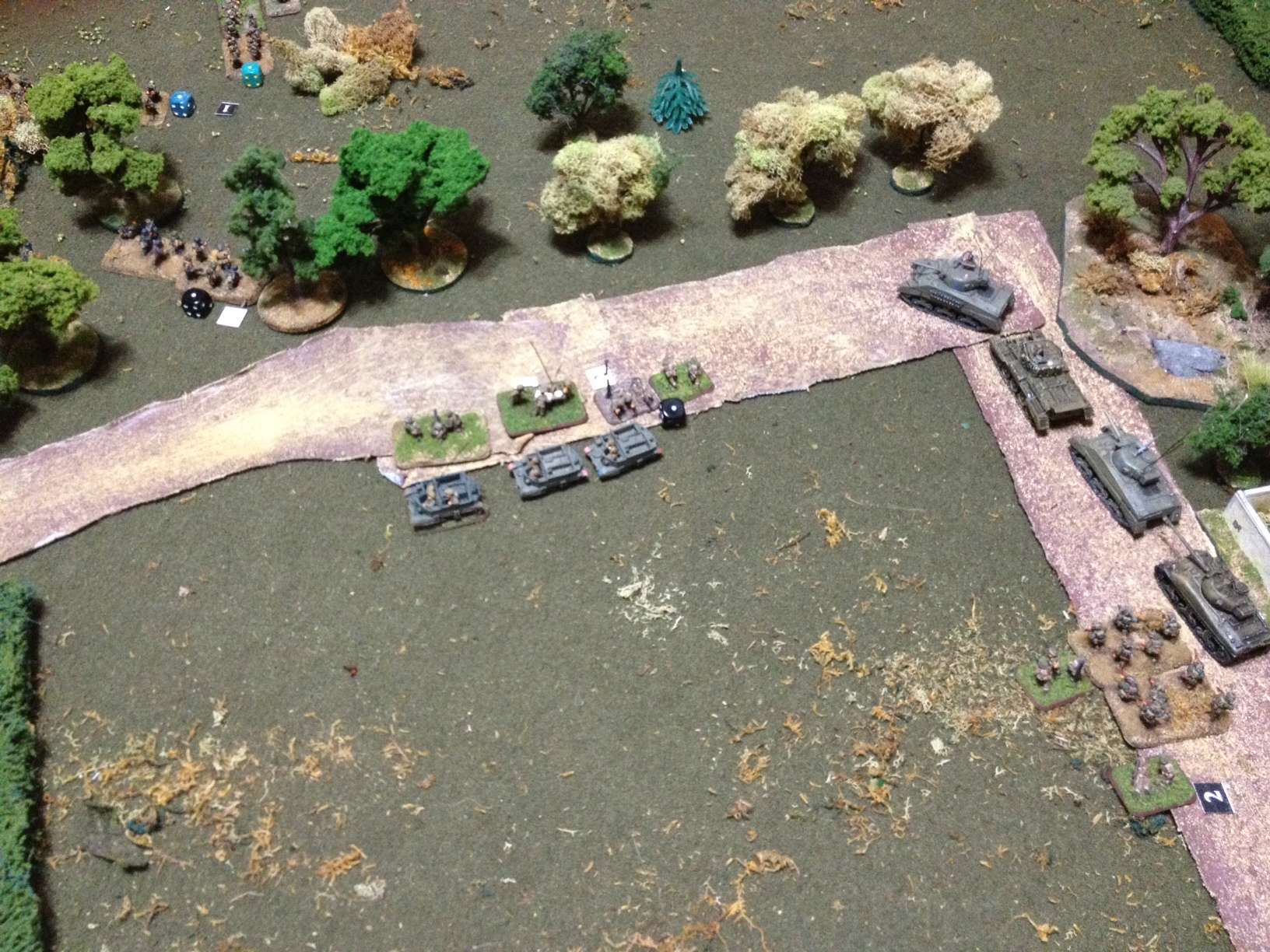 Having cleared the buildings on my right, Kevin's infantry and armour start to put the squeeze on me in the centre.

Matters were not helped by my four sections of off board 81mm mortars, which were unavailable for the entire game through my poor rolling. This caused us both much mirth as we imagined the voicemail greeting that the poor FOO kept getting. "Guten tag, ziss is zee artillery. Vee are not available right now, but pliss to leave grid coordinates, und vee shall get back to you. Auf weidersehen und have an ubermenschen tag!". Proof, if it was needed, that a good game is about how much you laugh, and not whether you win or lose.

Two things towards the end of the game lightened my spirits somewhat. Kevin, like a good tankie padre, pushed one of his Sherman troops hard and fast across my front and then hooked down towards the two buildings I held on my left. Unfortunately for them, they drove their pretty flanks right past my tankillers and a section of my infantry, who let loose with a volley of Panzerfausts and Panzerschreks. Hello Tommy! The lead Sherman explodes in a fireball, while the Firefly behind it takes an engine hit (hence the little green spanner, one of the tokens that came with the IABSM bundle) and a point of shock. Not having any HE or MG, the Firefly is pretty helpless.

The second good thing about ambushing Kevin's armour was that I got to use some of the cool little burning markers I recently ordered from Litko. Before the game, Kevin didn't think I'd need them. Double ha!

A close up of a Litko marker adorning a burning tank. Such a heartwarming sight!

That was about all the good fortune I had. Kevin had an intact armour troop and 2 intact infantry sections worked behind my centre, and they were poised to shoot my infantry out of the woods and houses they still held. I conceded.

Getting set to winkle out Jerry.

So that was our game. The estimable Conrad Kinch wrote in the latest issue of Battlegames that the principle joy of wargaming is social. He quotes the late Paddy Griffiths that "a wargame [is] a social occasion like a dinner party", and that the most desirable quality in an opponent is really, "would I gladly have a pint with him?". Hear, hear, Kinch. One of the great joys of this summer was making a new friend in Padre Kevin, and then deepening our friendship with a shared passion for toy soldiers. I look forward to pitching up on Kevin's doorstep in the UK at some point for a rematch and a few more pints. That won't be for a while, though. Not only am I unlikely to make it to the UK anytime soon, but Kevin and his lads are getting ready for a trip to Helmand, and then a difficult time as the two Royal Tank Regiments are amalgamated into one. He's a good padre and will be up to that task, but if you wish, say a prayer for him.

Happy padres give IABSM 3 two thumbs up. I'm the chap with the double chin on the left. Two cracking moustaches, don't you think?

So, in summary. My tactical deployment sucks and needs to be improved. My Litko markers are fun to use. There is a second mad padre out there, and I've met him. God is indeed good, all the time.

Posted using BlogPress from my iPad