Today was a day off work, and about half of it spent pushing on and getting the mounted portion of my Yankee cavalry project finished. The dismounts still need a fair bit of final brushwork and then basing, but I am happy to say the mounts are done. Here are they are having a bit of a parade outside in the late afternoon sun. You will noticed that except for the two ancient RAFM castings clutching their carbines, all the Yanks are holding drawn sabres. This assembly was quite intentional, as I wanted an early war look for these figures, influenced in part by my ongoing ACW campaign. If I do a third box of Perry figs as Union cav, I shall certainly do them holding carbines and pistols. 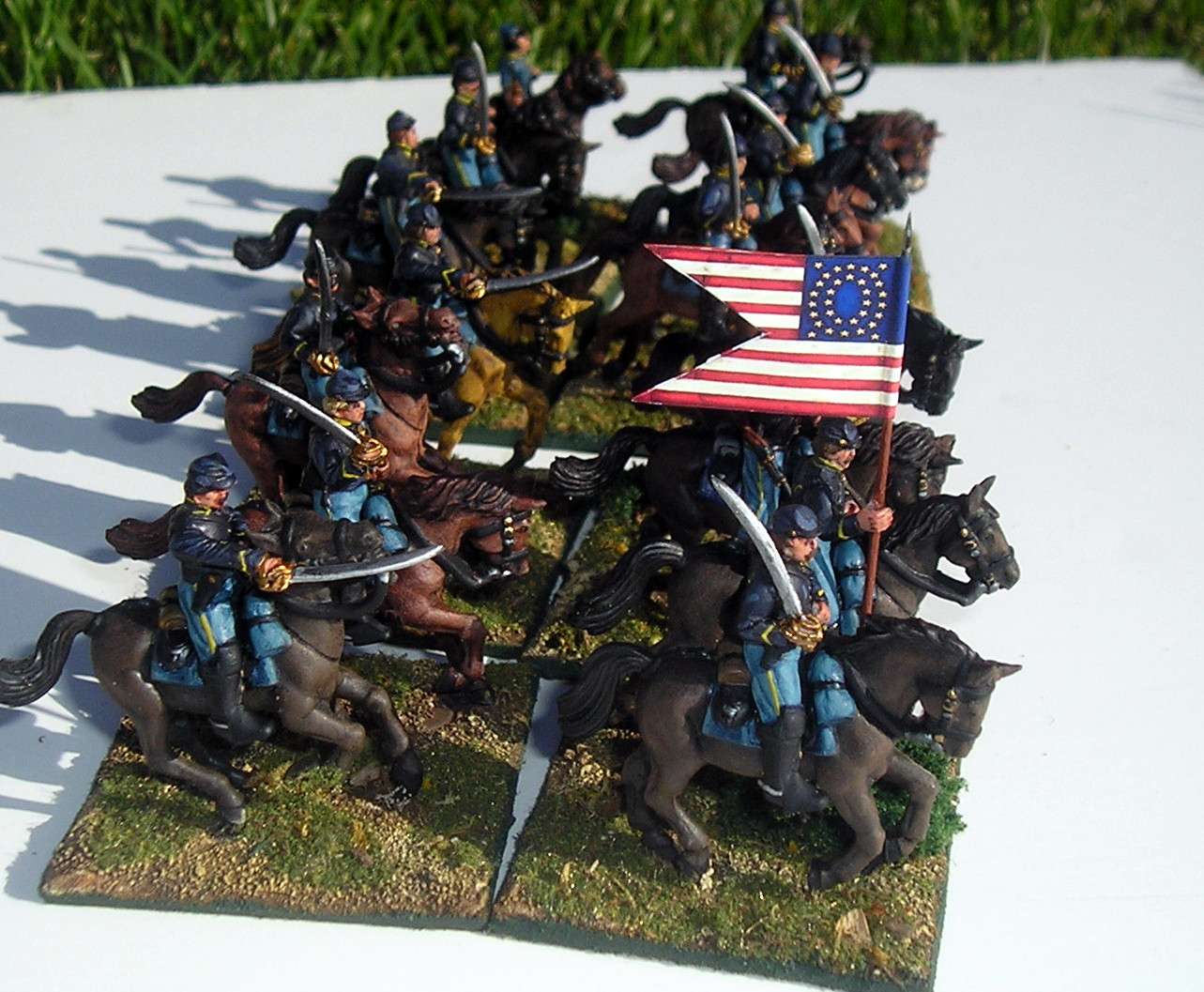 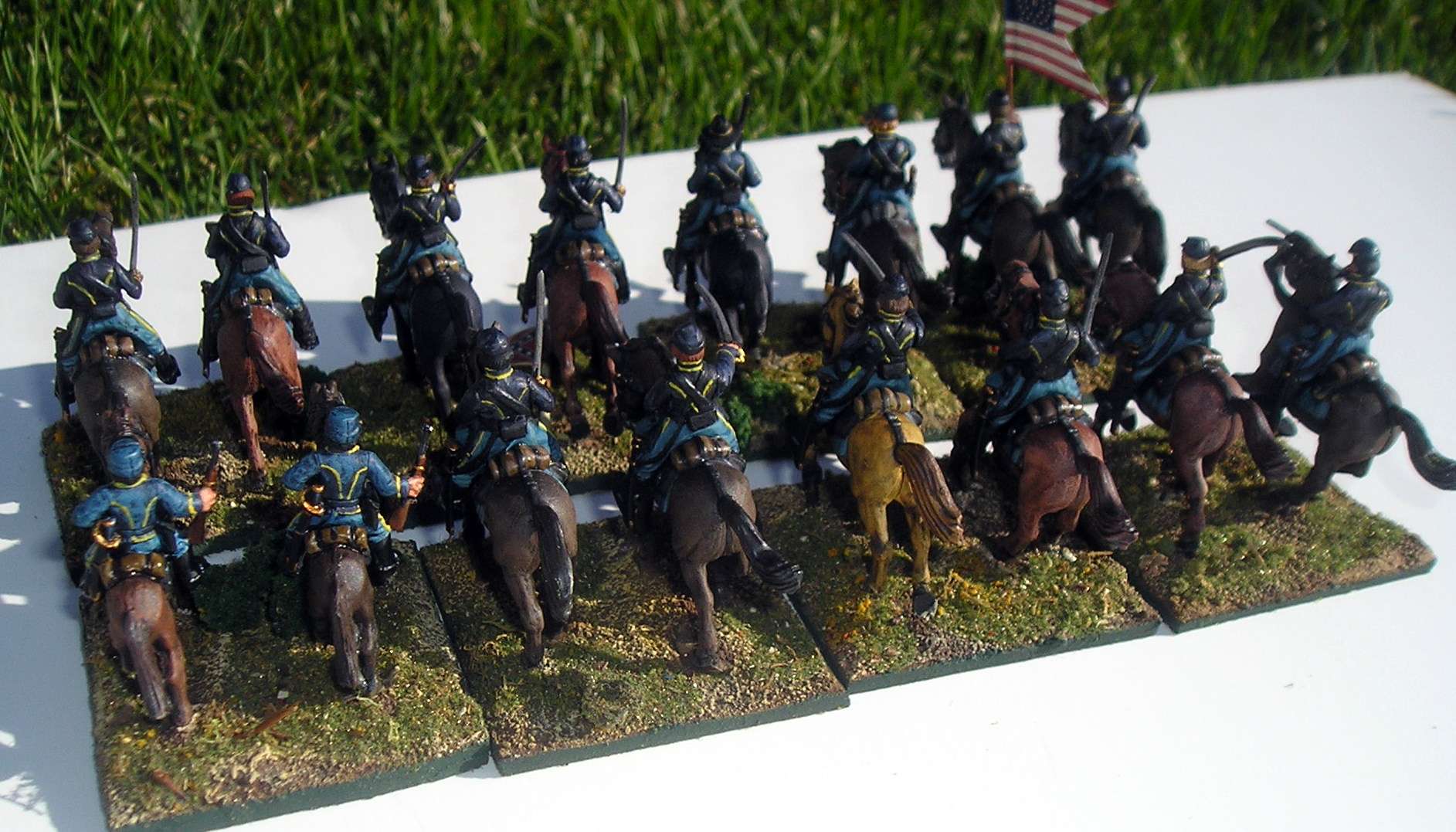 I'm quite pleased that the yellow piping on the collars, pant legs, and at the back of the cavalry jackets looks ok. The only yellow I could source locally was a jar of Tamiya Flat Yellow, and it was a beast to work with, thick, gooey, and continually needing to be watered down. Yech. Glad it turned out ok. 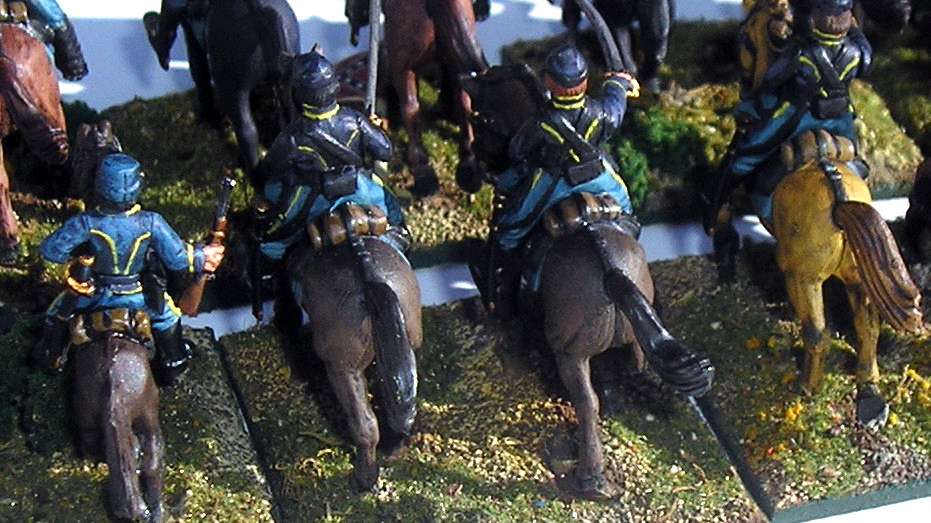 Being a bit cheeky here - had a surplus rebel banner that I slipped onto this base, to suggest they charging pell mell after their routed foe. 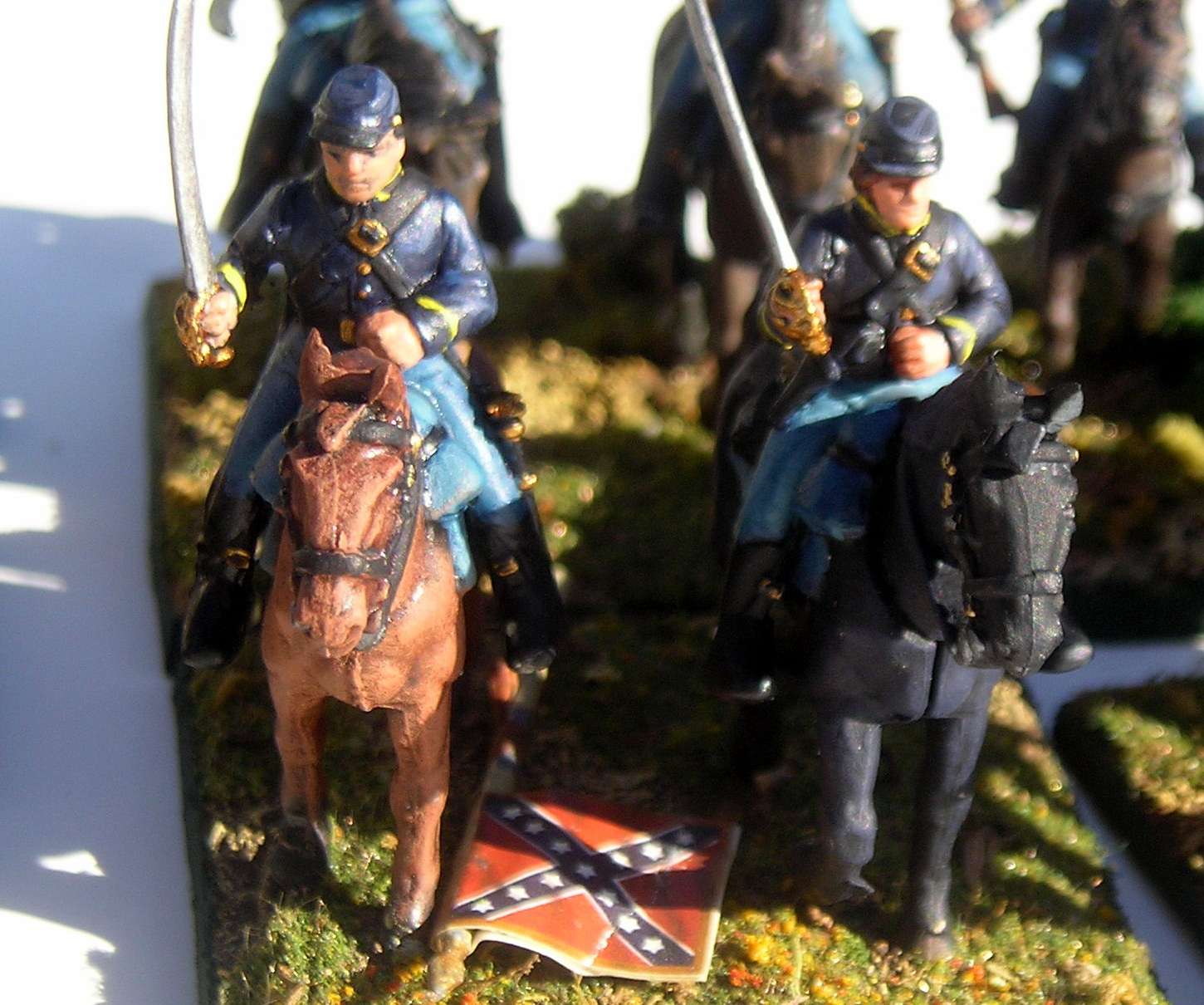 And here they are cantering down a road somewhere in the Shenandoah valley. Quite a peaceful scene.

But suddenly the Colonel orders the regiment to halt. Has he seen something? 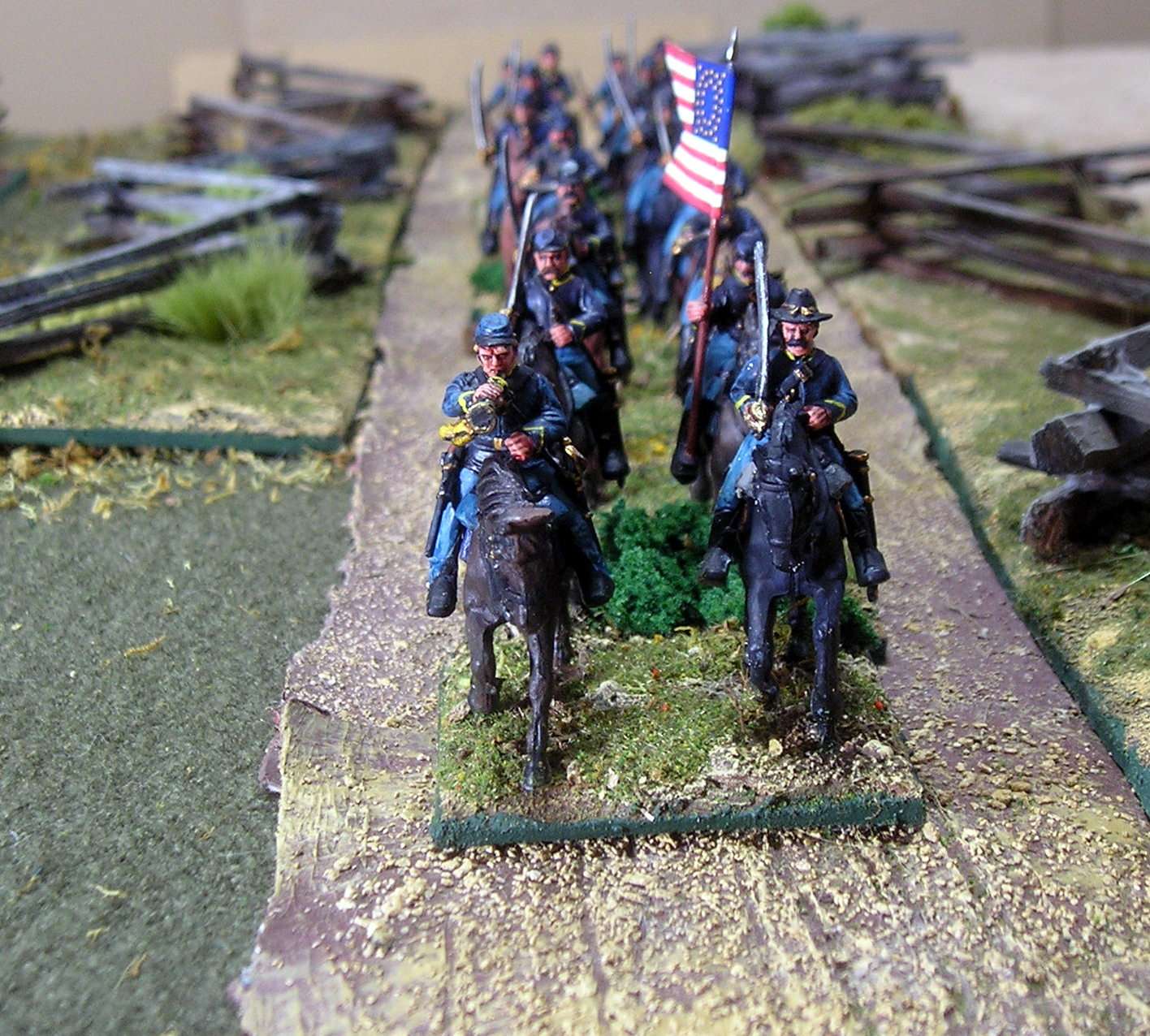 Indeed he has! Rebel cavalry moving on the column's flank! These figures are the first box of Perry Brothers cavalry I bought for Part One of the Guild Year Long Build project.

The Yankees deploy from column to line on their right flank. Will they complete the move in time?

The two lines hurtle towards one another. Who will emerge victorious? 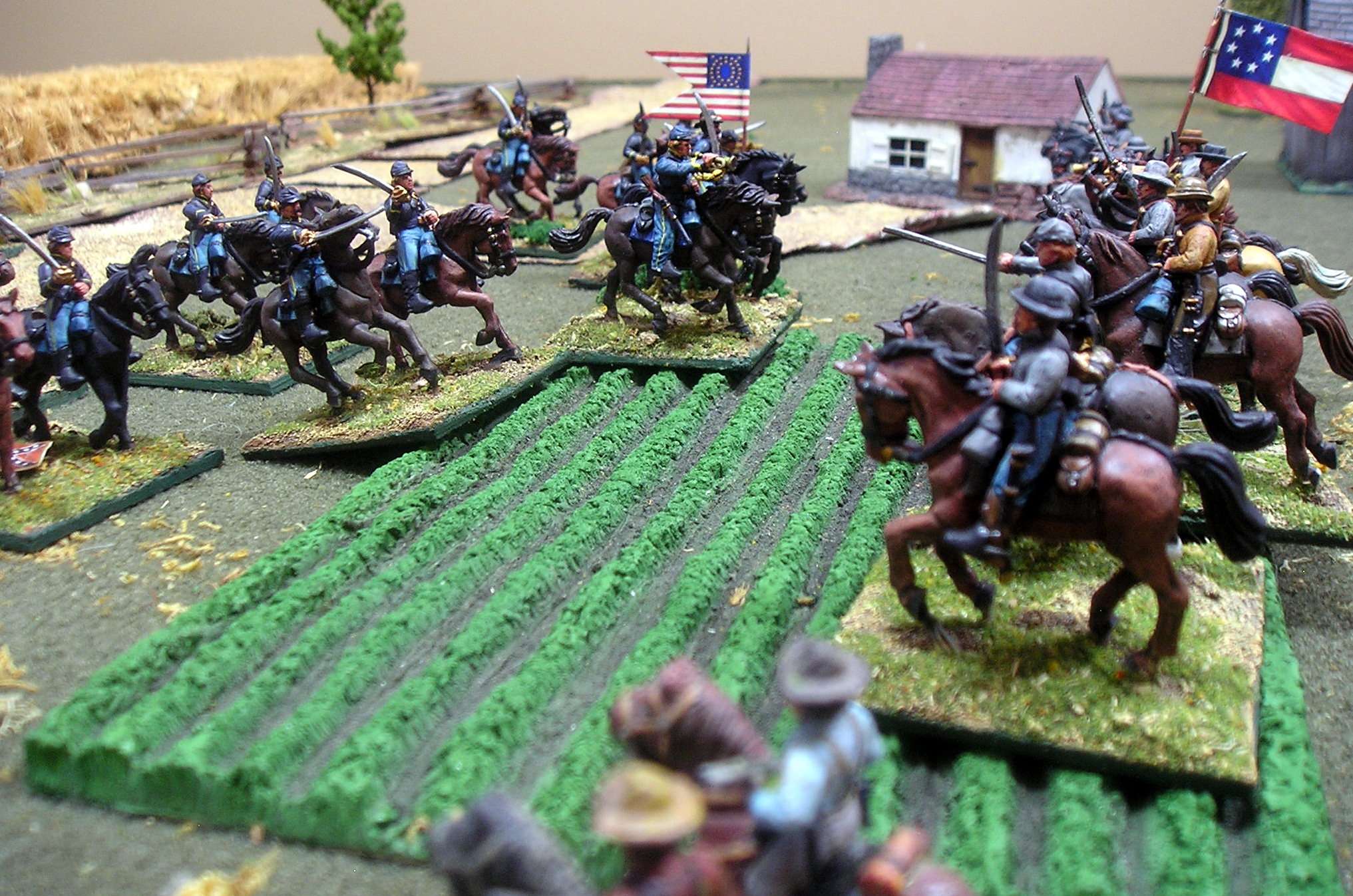 Blue and grey, sabre to sabre.

And cut! OK, that's a wrap. We will never know who wins. I just took these pictures for fun, as I wanted to see what two painted boxes of Perry plastics and five months work looks like. Not bad, I says to myself. And don't those GMB flags look nice in the middle of that melee? Lovely stuff, the GMB flags. 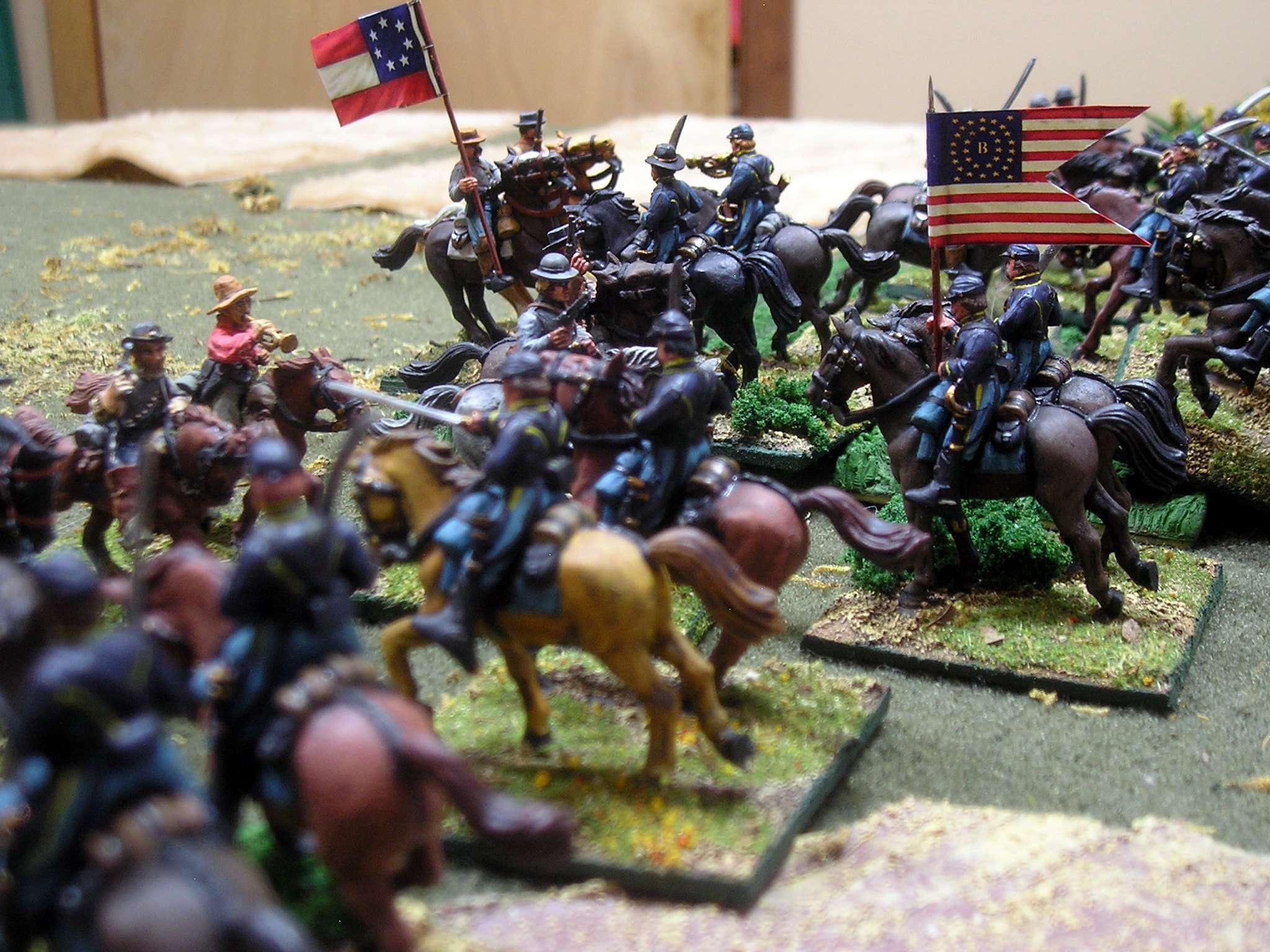 Now to crack on and get the dismounts finished.