At the start of the year I committed to the Guild Wargamers year long build project to doing several batches of 28mm ACW figures, including a regiment of Confederate cavalry, including both mounts and dismounts. The mounted chaps have been done and posted here for a while now, as were some of the dismounts, but I had delayed finishing the dismounted command. That project is now complete. Here's the complete dismounted unit.

The dismounted unit is a bit of a dog's breakfast. The sturdy looking chaps holding rifles and carbines are mostly Redoubt, but the smaller fellows are from the ancient RAFM Missouri guerrillas blister, which I bought, well, a long time ago. The four figures in the command group are Sash and Sabre's CS8 four figure Reb Cav Command pack. Sash and Sabre makes true 25mm figures and advertise them as such. In an age of scale creep, their figures compare well to Foundry's line, but are noticeably smaller than Redoubt or Renegade, but they have their charm. 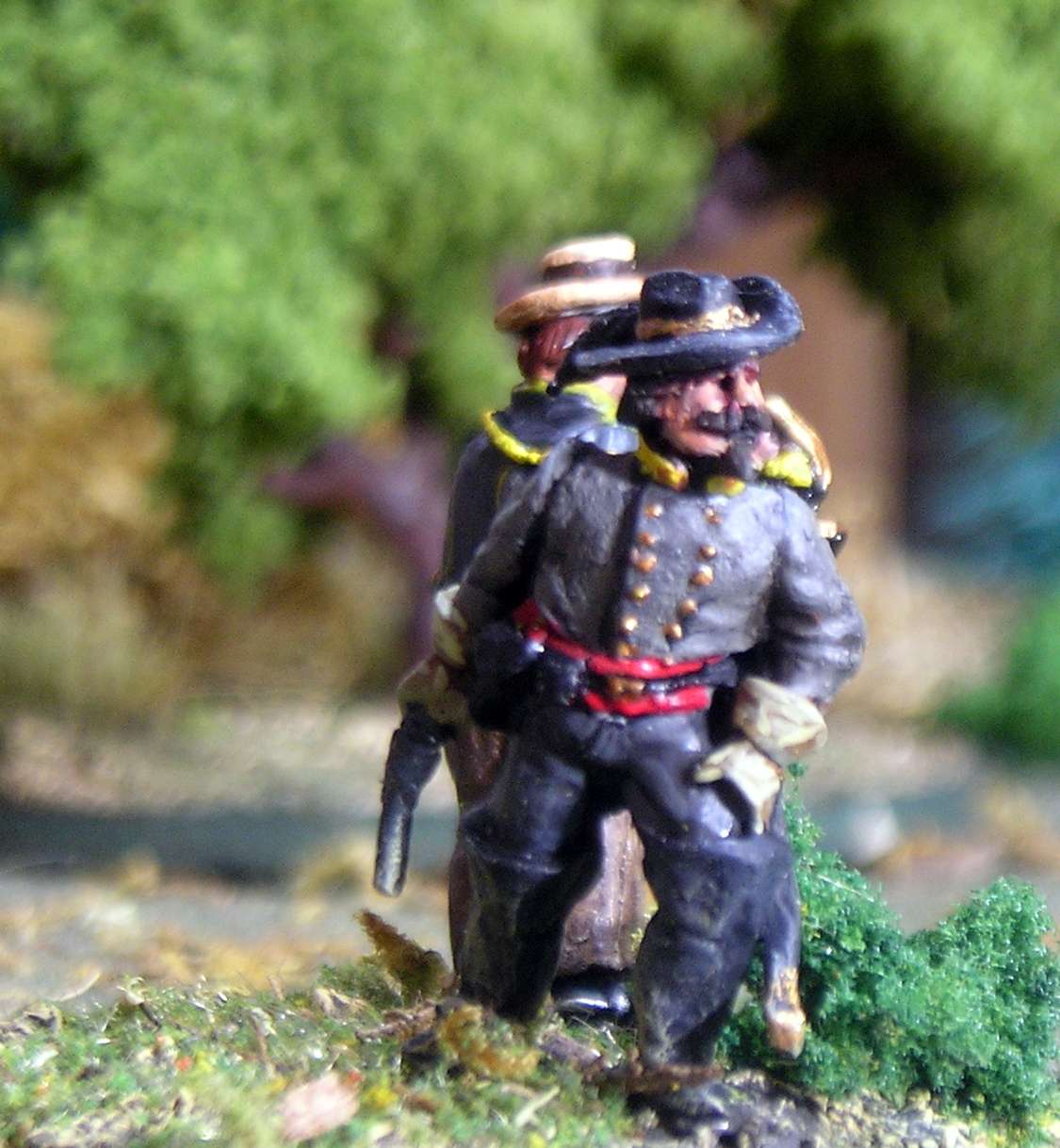 Sash and Sabre commander, a modern D'Artagnan wannabe, leans into the camera, exuding charm. This same pose has devastated the belles of Charleston on many occasions. Followers of my Bluffsburg play by email campaign, meet Col. Romney Wagner.

There's an interesting story behind these figures, which reflects well on S&S and so I want to tell as a thank you to them. I had ordered S&S' reb artillery crew pack and received C9, the cav figures, in error. Christopher at S&S was very kind about allowing me to keep these figures as a freebie, and shipped me the right figures. It was more than a few emails between the two of us, and it probably cost him more time than the order was worth, but he made it right and I am grateful to him. 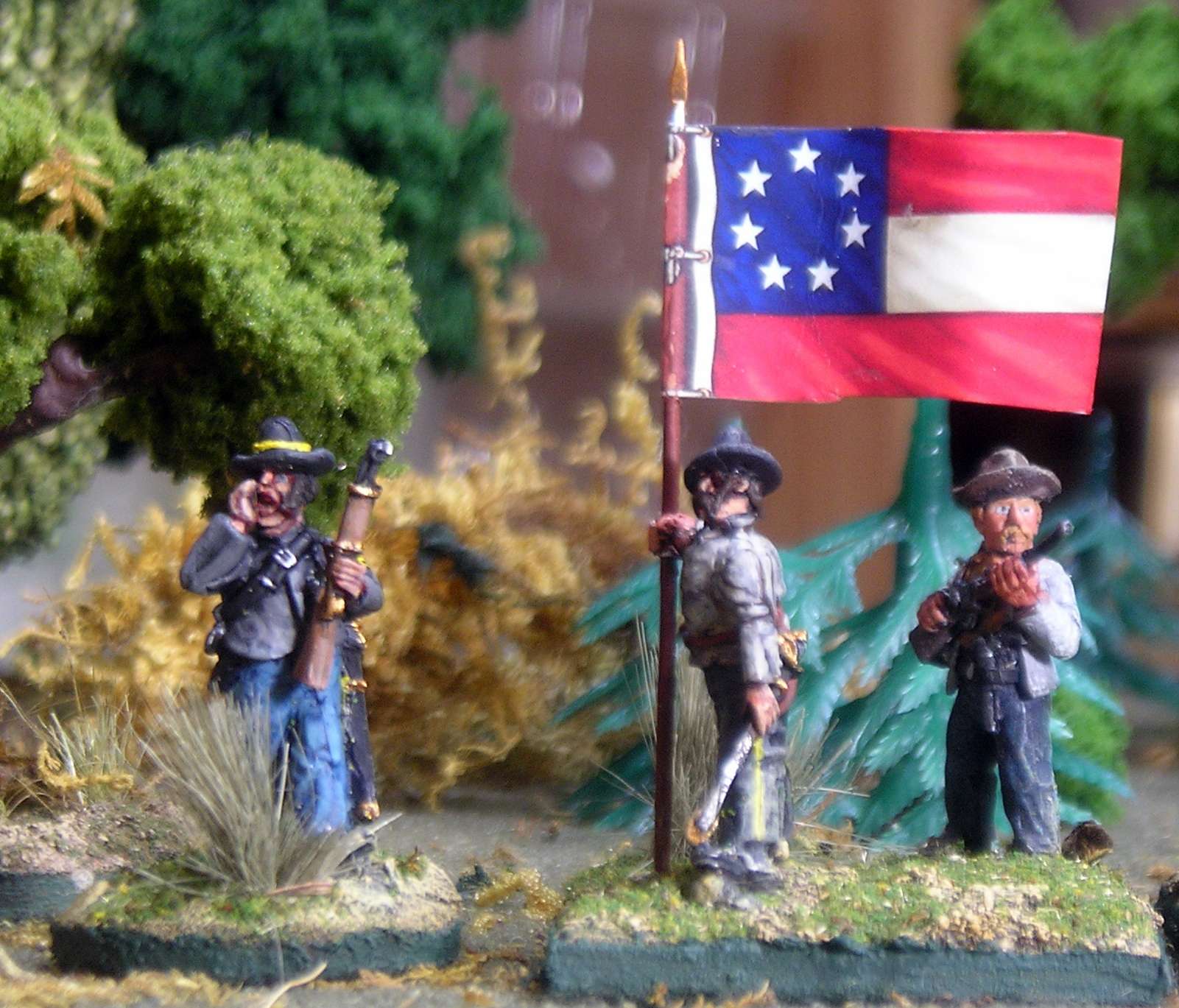 S&S standard bearer, obviously a fan of General Burnside's whiskers, holding a GMB banner, protected by one of those Missouri Guerilla figures I mentioned. On the left is another S&S figure, a sergeant, based individually. He will be a useful fellow in Sharpe Practise / Terrible Swift Sword games, I think. 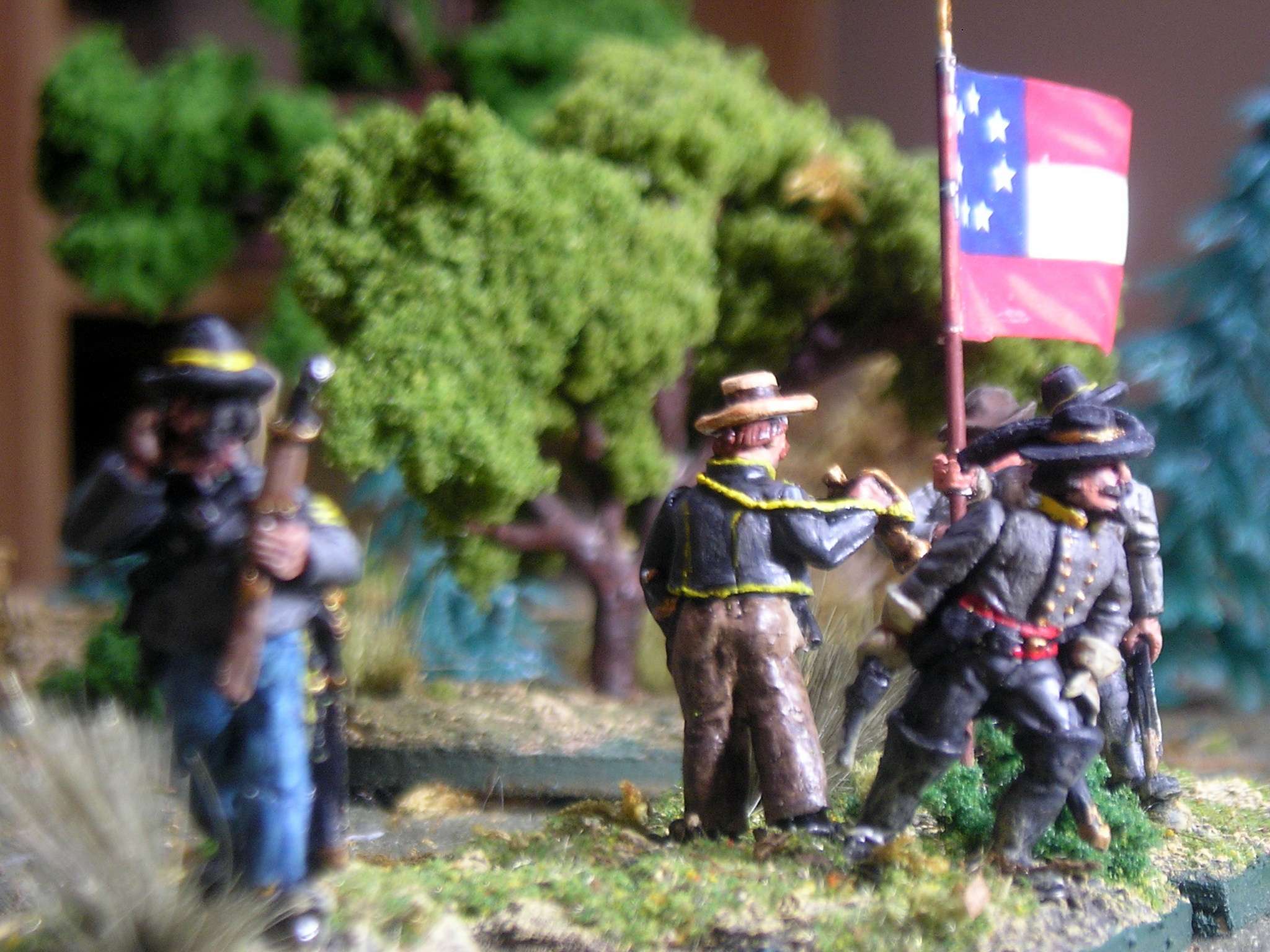 Commander with his S&S bugler. I tried for a very motley quality to the uniforms of these fellows, to suggest a mid or later war ad hoc medley of uniforms, but I wanted the bugler to have a proper cavalry jacket with yellow piping. 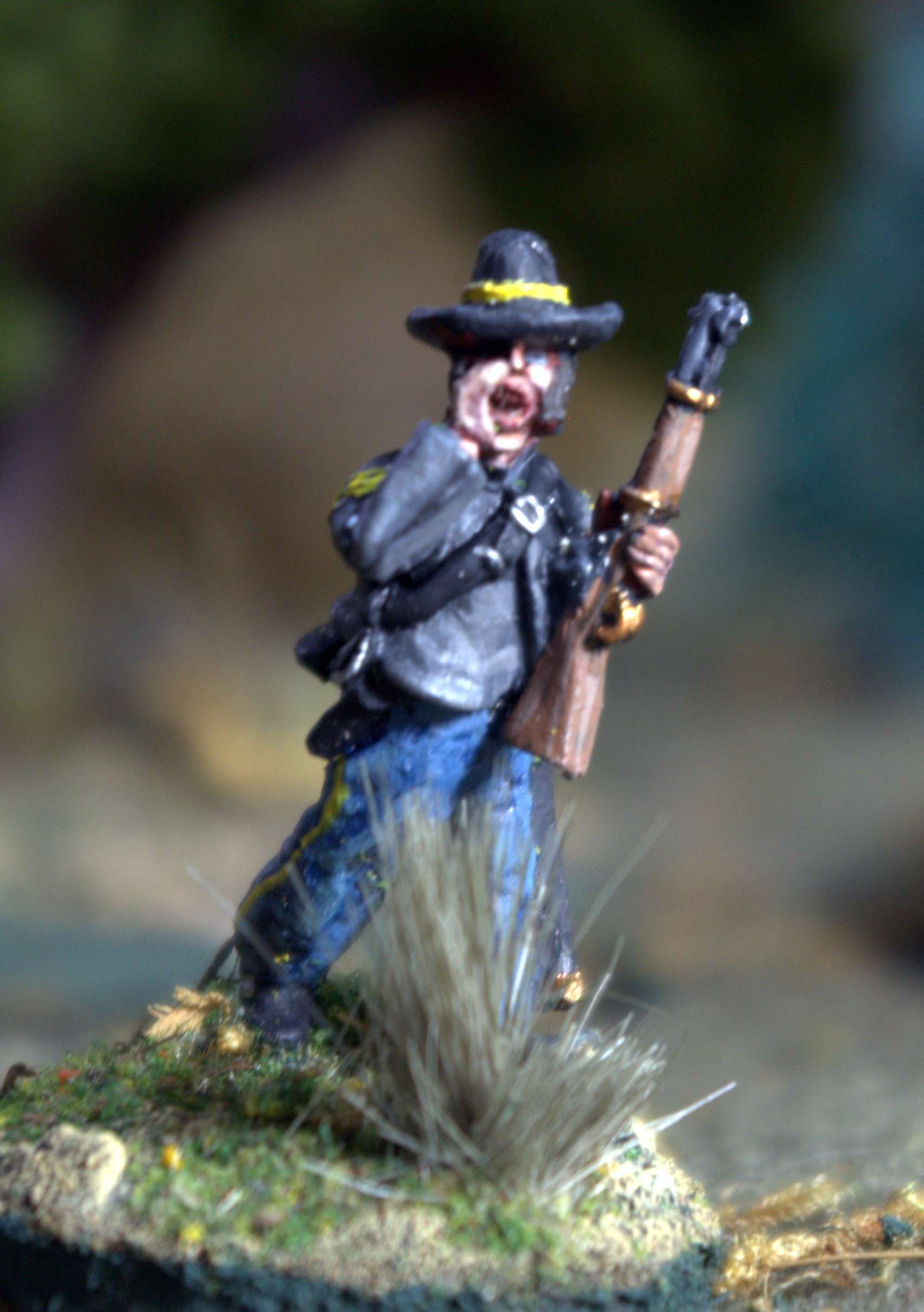 Another view of the S&S sergeant. Of the four figures in the pack, I think he's the best. I find S&S figures are a little hit and miss in the crispness of their detail, but this fellow really stands out. The pose is very dynamic, he looks like he is shouting crders in the heat of battle, and has a tough veteran's aura about him. My photography isn't kind to him, but I even managed to get something of a wood grain on the furniture of his carbine, something I'm just starting to figure out. My favourite figure of this batch. 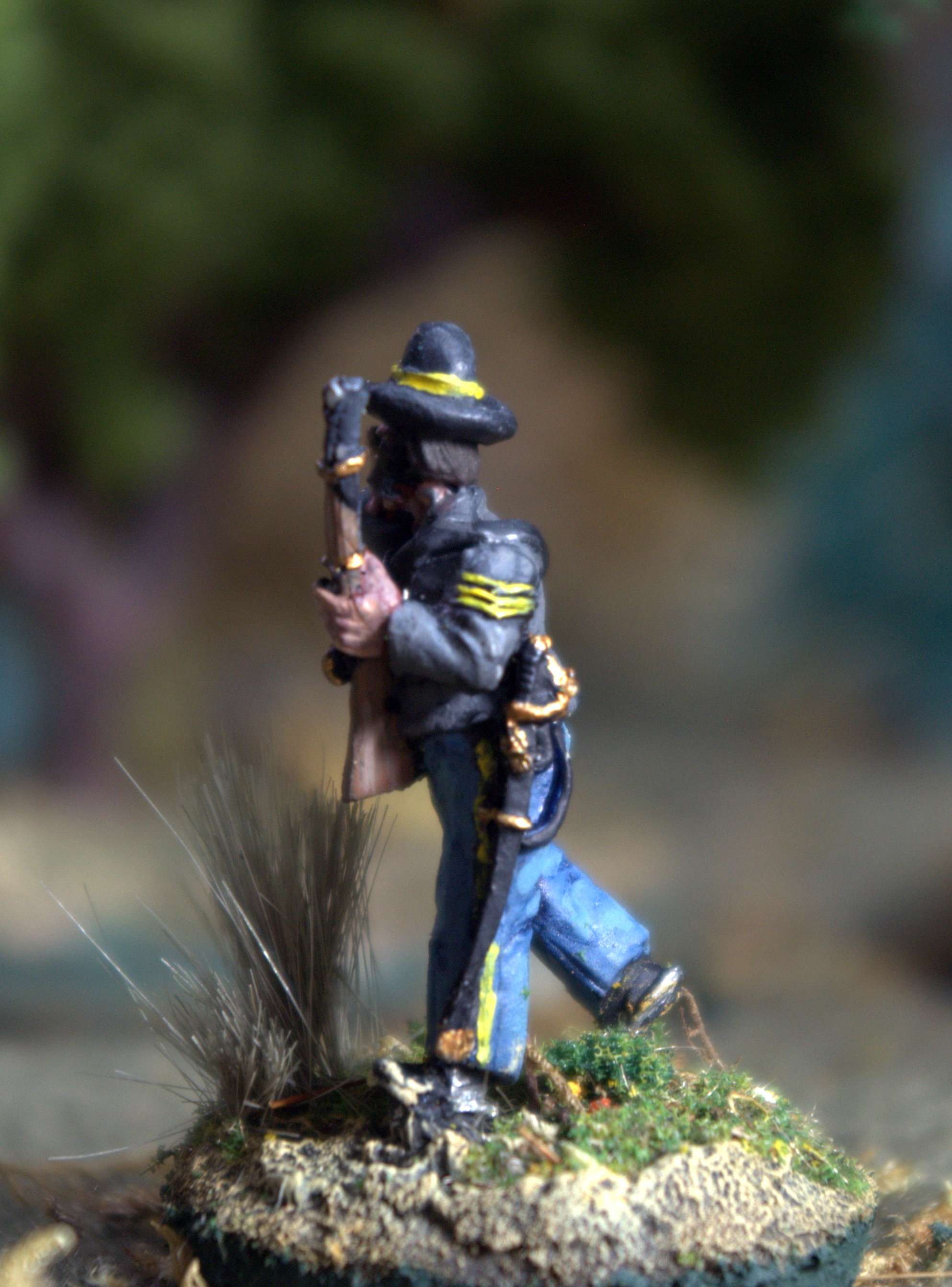 And another view, just because.

I will note as I close that Mad Padre Wargames ticked over 30,000 page views this weekend. Yes, most of those were mine, but I am very grateful to those of you who follow this blog, I enjoy your company and encouragement, and I know that putting my work up here makes me a better painter, so thank you for that. Blessings, Mike