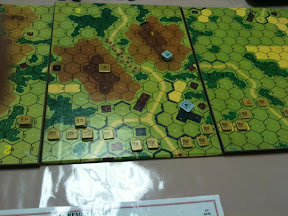 If that real estate looks familiar, than like me you are old enough to remember Avalon Hill's Squad Leader. There was a time when I was in high school where I knew the four original game boards the way a Talmudic scholar knows the Torah. After SL I bought Crescendo of Doom, the early war supplement, and the rules got more complex. Then I went to university, met girls, and lost interest in SL. By the time it became Advanced Squad Leader, whatever wargaming I was doing was with tabletop miniatures, which had ways been my first love.
Almost three decades later I found myself revisiting SL. Tyler at the local boardgames club is the only member with a wargaming bent, and has been an ASL fan for years. The few times that he has enticed othe regulars into trying it, I gather that they've been slaughtered, and so Squad Leader hasn't caught on. But Tyler knows that I'm a wargamer, and that I'm desperate for a fix, even a cardboard fix, and so last Thursday we agreed to play ASL. The scenario Tyler had chosen was one of the originals, The Hedgehog of Piepsk, an all-infantry game in which a large force of Russians, half regular, half conscripts, try to take a key building from a much smaller force of regular Germans with lavish LMG and MG support and one offboard arty mission. I took the Russians.
The ASL rules felt similar but different. After almost three decades I could remember the basic SL rules, but it all seemed a little askew. Offboard artillery was more complicated, there was a sniper rule I didn't really understand, MGs worked a little differenty, particularly the sustained fire rule, and funky things could happen to leaders on certain rules, which actually benefitted me later on when my senior leader rolled 2 on 2D12 for a morale check and became a Heroic Leader, which was a great bonus for me. 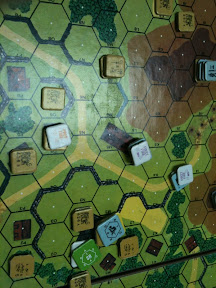 My force was a 50/50 split of regular 4-4-7 (if you know SL you'll know what this means) and conscript (4-2-6) infantry, with two 8-0 and 1 9-1 leaders. My plan was to send most of the regulars on a flanking move to the left, through the hills, and the conscripts on the right, through the woods, while leaving enough squads to try and seize as many buildings on my board edge of the centre map as possible so I could have some As you can see in this second, rather shiny photo, Tyler's deployment far back from the main objective, the three-hex, two story building on the centre board, allowed me to grab some of the centre real estate in my first move, while only taking fire from one of his machine gun positions. In this picture you can see a German stack on the centre hill, and that effectively had the flanking move of my 4-4-7 squads checked, but Tyler decided he needed it to retake the objective and moved them down into the village. While he trashed my poor conscripts on the right, I was able to get around behind Tyler's squads, charge down off the hill, and eliminate his core units, leading him to concede the game.


Would I play SL again? Probably, if only for the nostalgia game and because, around here, it's oone of the only wargames I have an opponent for. However, after spending several years buying into the concepts behind the Too Fat Lardies rules, SL seems too frictionless for my liking. Admittedly leaders are prominent in Squad Leader, but function primarily, through their moral benefits, as force multipliers on the attack and force protectors on the defence. Leadership in terms of command and control is not really modelled in SL. You can move as many units as you like, each turn, regardless of the presence of leaders, and running a platoon or even a company seems much more effortless than in TFL rules such as TW&T or IASBM.