Troops For The Elven Realm

Middle Earth, I find, is rather like Napoleonics, in that after a while, you start to want to do all the armies.    Well, maybe not all of them, but I do have some unpainted 6mm Bavarians and I am not sure how that idea started.

While my Elven force has been decidedly, well, matriarchal thus far, some years ago I acquired some of the GW lead sculpts of elves as seen in the (infamous to book purists) Helm’s Deep sequence from Peter Jackson’s The Two Towers.  I also had some sprues of the GW plastic elves from the Warriors of the First Age set, the chaps seen in the prelude to the first Jackson film, where Sauron is walking around all “OOO, look at me and my shiny ring on my vulnerable finger, bet you can’t cut THAT off, hahahaha … bugger, that hurt!”.

I had enough figures to do two 12 strength units for Dragon Rampant, if I augmented the archers with some other figures.   Besides, my good friend James has been knocking it out of the park since November with his amazing progress on the Vendel fantasy sculpts we chipped in on, as you can see here.  His hand painted banners are a thing of beauty, and he’s been doing some terrific BIG solo battles using Dragon Rampant, such as this one, which is accompanied by some lovely writing.  I figured that the next time we get together, we can combine forces, and I can augment his elves with these chaps.

These will probably be fielded as Light Foot in DR terms, using the upgrades cleverly thought through by Iron Mitten/Secundus here. Chaps with the silver skirts in the centre of the unit are lead figures, which now appear to be OOP. 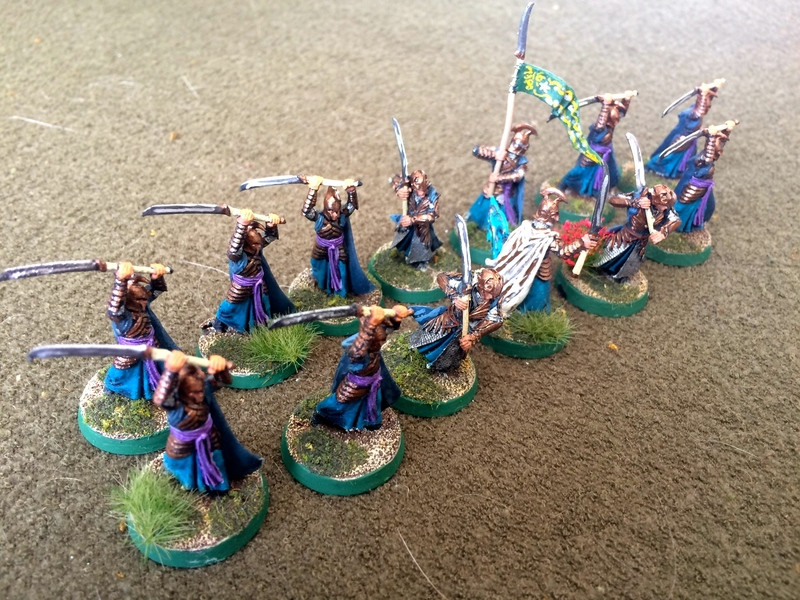 Unit of eight archers, also from the plastic Warriors of the First Age set.  I had a bit of a disaster priming these with black spray paint, as the paint got all thick and nubbly on some sides of some figures and hid a lot of detail, so they don’t look terrific up close.  However, in their bright blues, violet and gold, they look sharp enough from a distance.   Getting another sprue just for the 4 archer figures is annoying but probably cheaper and more useful than buying these chaps, as the plastic sprue will give me enough figures to make up a 12 figure unit of men of the First Age that can pass as Gondorians. 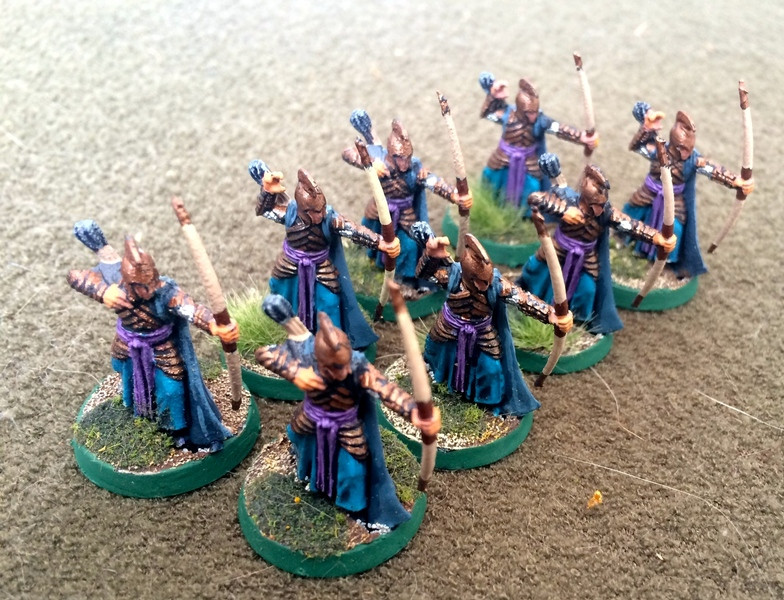 Finally, a close up shot of the command group.  I gave the boss a white cape, and tried a new technique for me, starting it out as brown, and then layering it up with three successive colours, ending in titanium white.   You can see it better in the first shot, not sure I like it.  I got the nerve to try the flag thanks to James’ good examples. 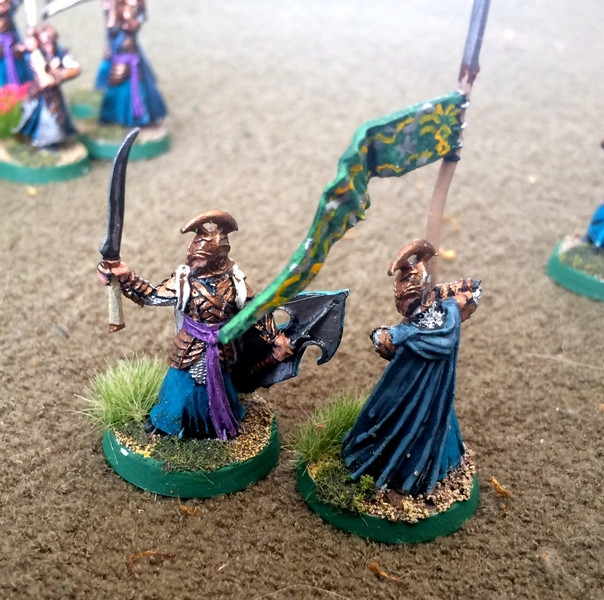 So, a force to keep the orcs on their toes, I hope.  If you haven’t seen these figures yet on the Analogue Hobbies Painting Challenge, they appeared there with another project which I will show off separately here another time.