Hot Lead is one of the shining stars in a fairly modest firmament of Canadian wargaming shows.   It is a labour of love, put together by a group of gamers and friends in Stratford, Ontario, for two decades now, and it is one of the red letter events on my gaming calendar.

Last weekend I made the three hour drive down to Stratford and was able to game on Friday night and Saturday, before heading home.  Here are a few highlights of my time there

On Friday night my friend James and I decided to put all of our Middle Earth figures on the table and see how big a Dragon Rampant game we could manage.   It was pretty epic.   We were going to keep it to ourselves, but the angels of our better nature prevailed and we invited some folks to game with us.  I can’t say it was a well designed game, and some folks had more fun than others.  The chap on the top left had his Dunlendings routed pretty quickly by some Ents, and I still feel badly about it. 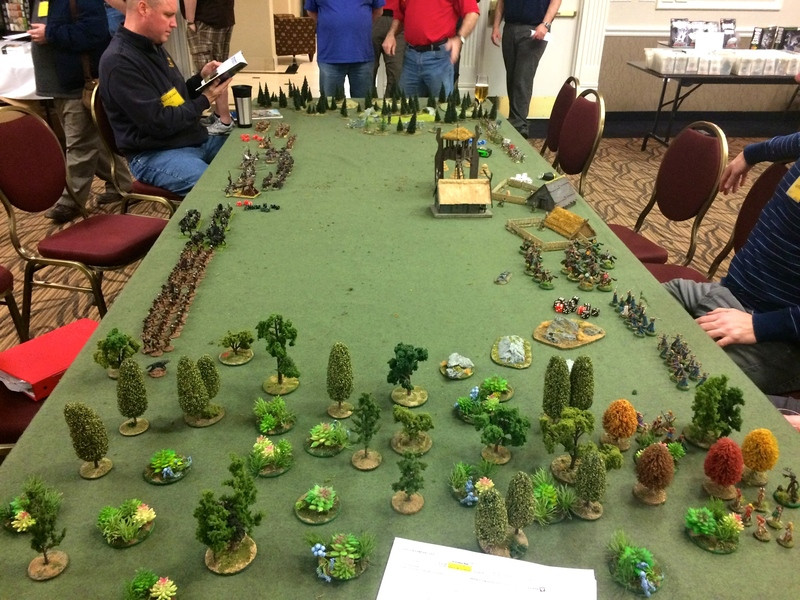 On the other side of the table, James’ Vendel Trolls take on my Bombshell Minis tree sprite and her faerie friends, who did quite well until a werewolf gobbled them up. 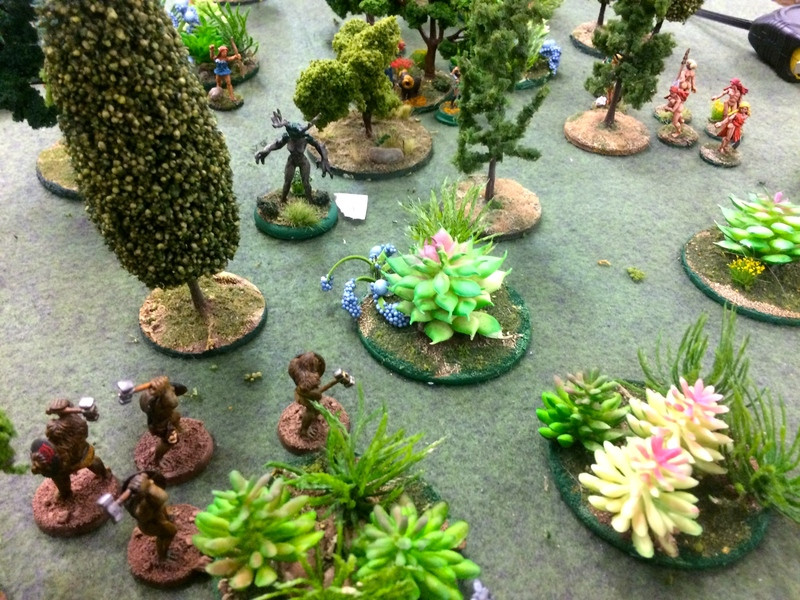 On Saturday I played in a terrific Napoleonics game put on by Rich Brooks, using the Blucher rules.  I have tried these rules and enjoyed the chance to get a master class in them from Rich, and learned a few things that I was doing wrong.   Rich has a very clever system of laminated cards attached to each base, which allow players to use dry-erase markers to mark off hits on each unit.   Rich’s game was a recreation of the 1809 battle of Bad Wurzbach between France and Austria, and my French corps under Lannes faced very determined resistance from a bright young player who punched hard.  The French took one of two key objectives but lost the game when we hit our break point first. 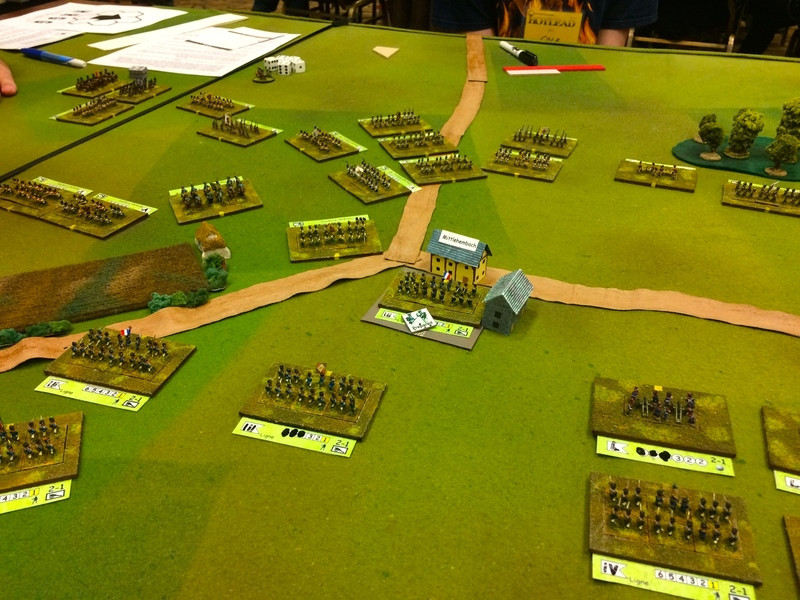 An amazing co-operative game by Alex Karolyi and Thomas Walker, where the players work together to blow up the Death Star. 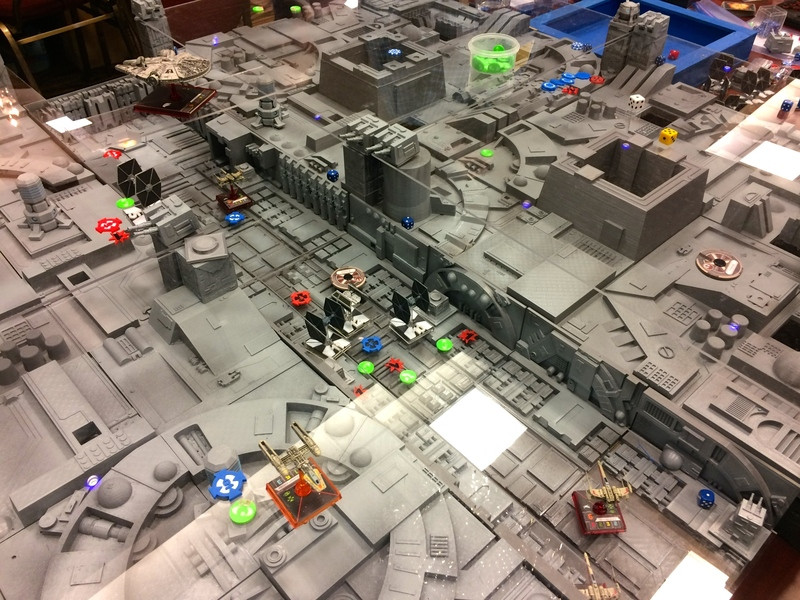 An utterly breathtaking layout. I tweeted these images to some Star Wars fans and they were quite gobsmacked.  There is a plastic sheet over the death star model to allow the ships to maneuver and to protect the tons of work that obviously went into the Death Star model. 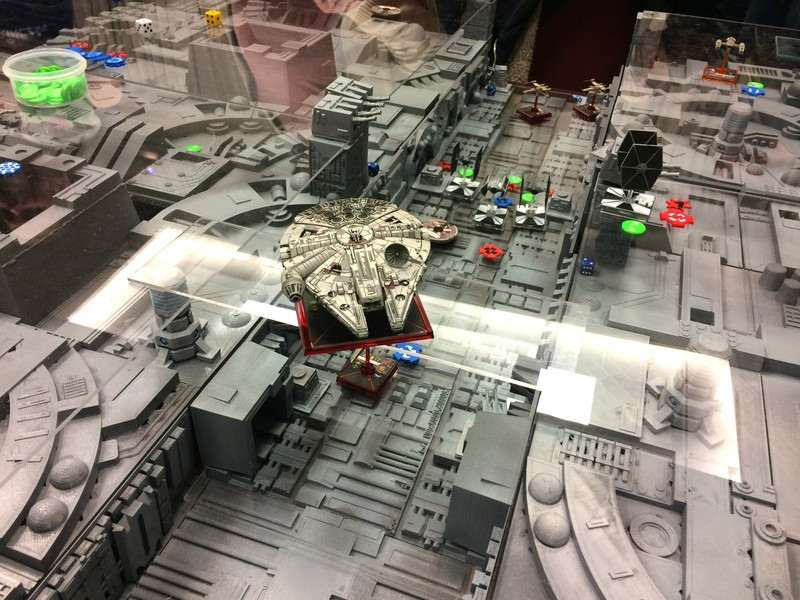 A huge 28mm Battle of Eylau game, using the Shako rules, ran all day.  Quite popular. 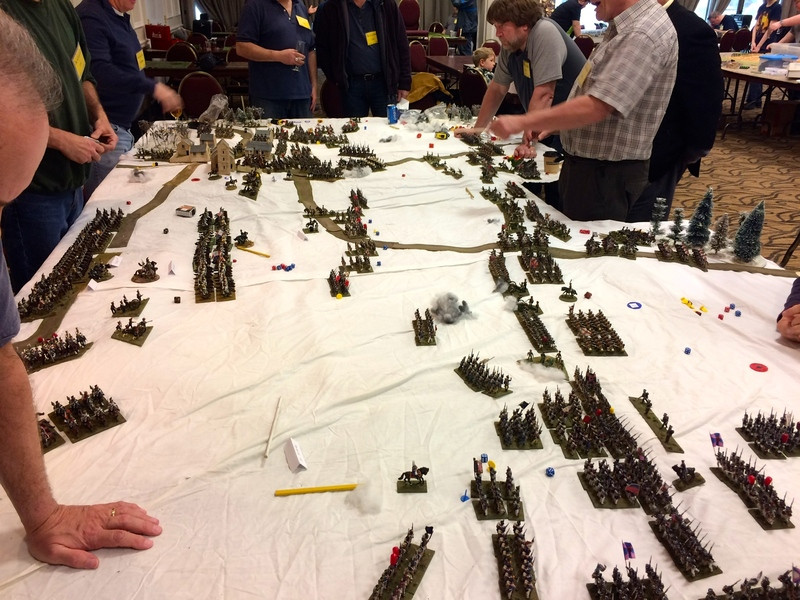 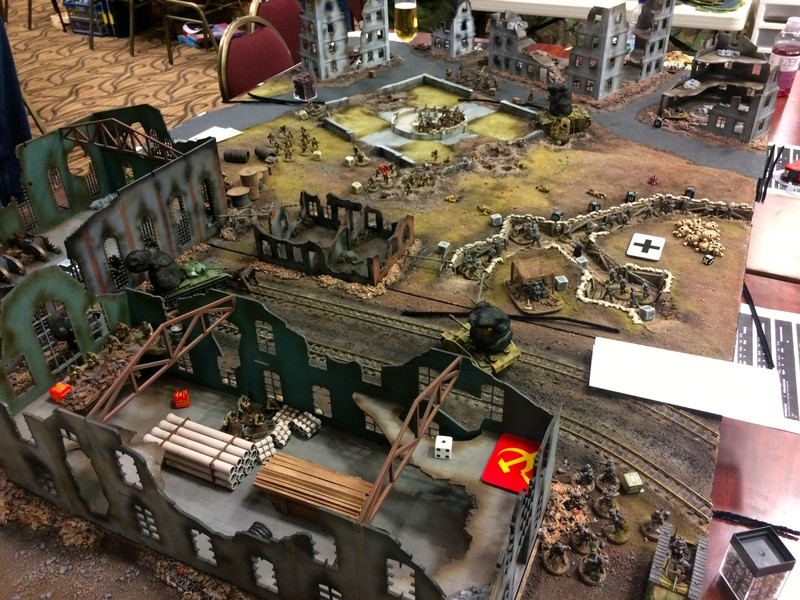 I took this shot to show the fine quality of brushwork on all the figures. 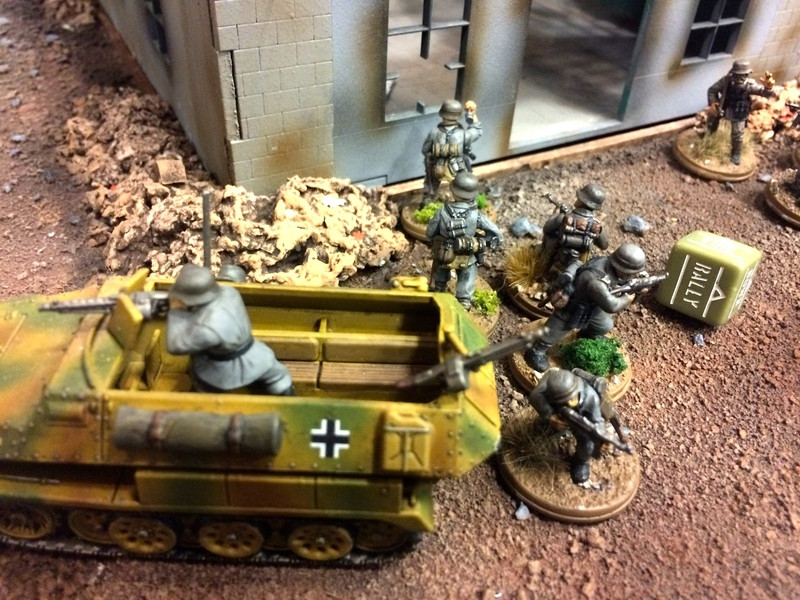 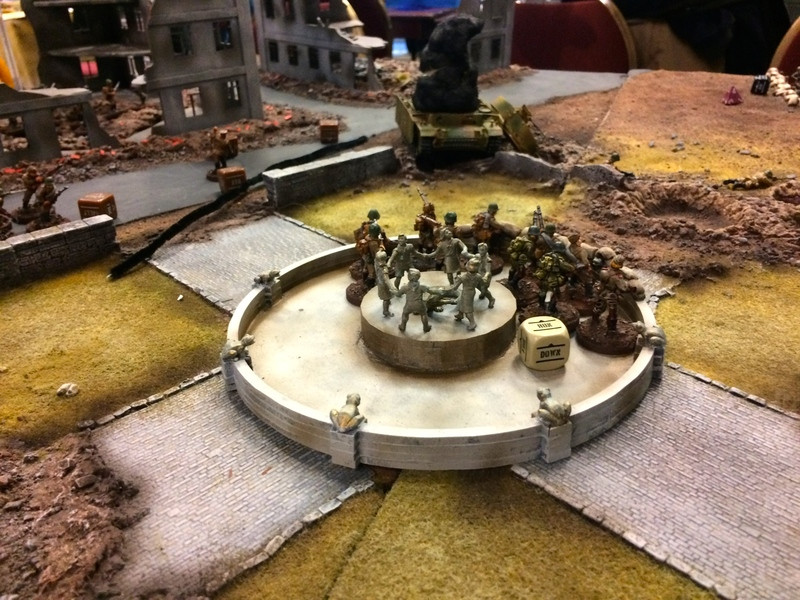 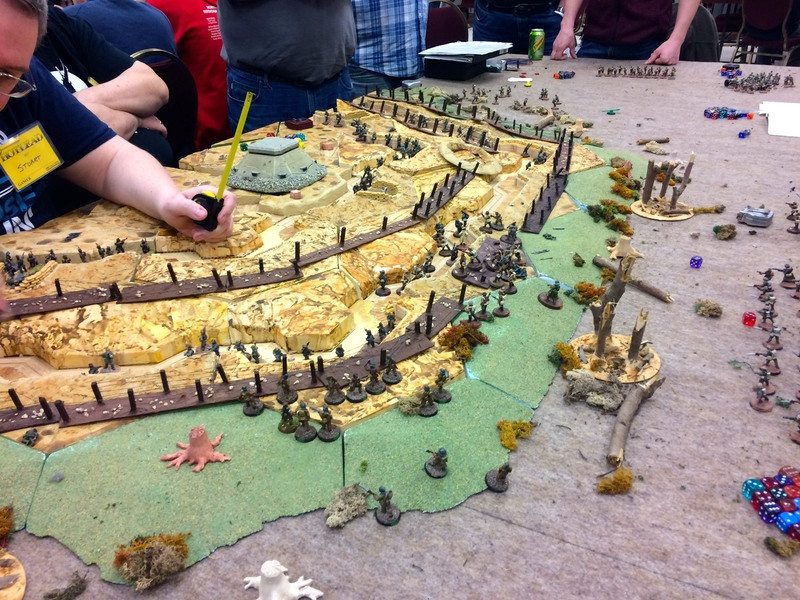 I loved this pre-gunpowder Flint and Feather game, using the Crucible Crush figures. 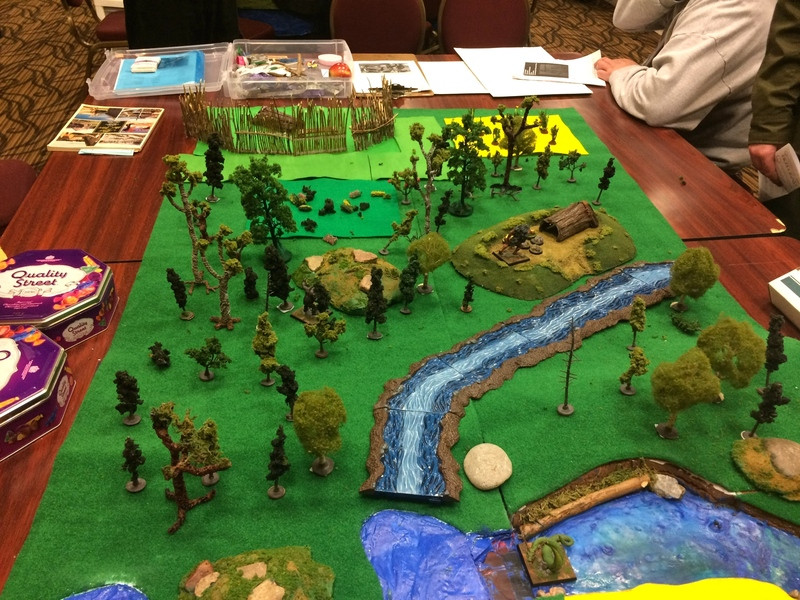 I was quite captivated by these three canoes. 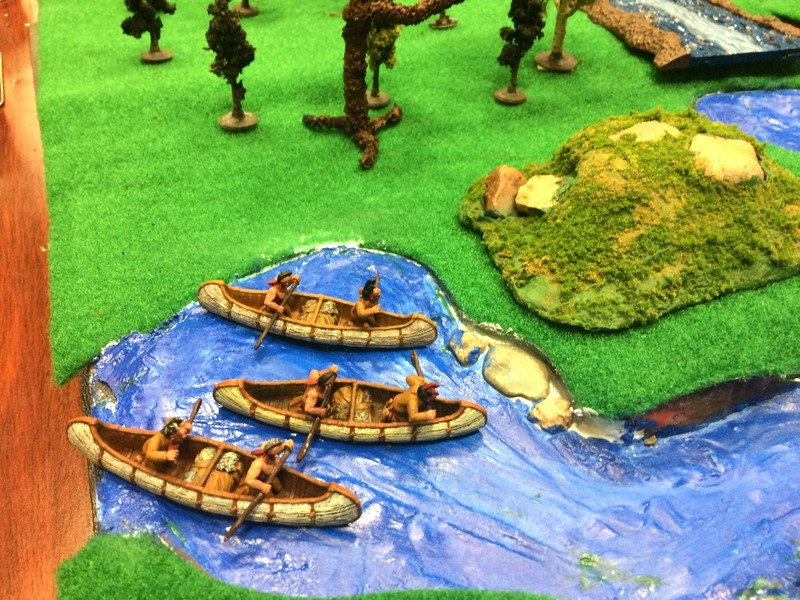 A fantastic British fort is besieged by beastly Saxons, hosted by the chaps from the Kent Essex Gaming Society using the Dux Brittanorum rules.   Terrific layout.  One of several Too Fat Lardies game at HotLead, always nice to see. 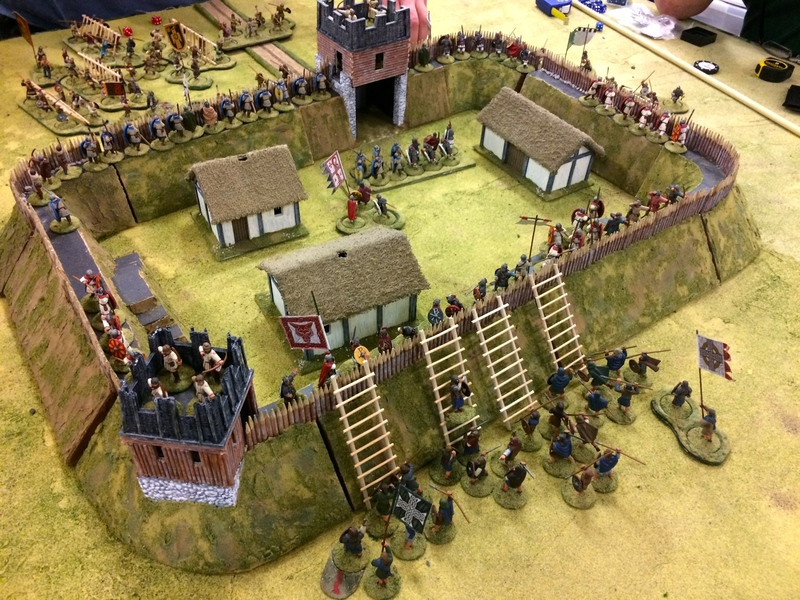 My other high point of Hot Lead was that I put all of my Warhammer 40K figures in the Bring and Buy and got a decent price for them.   To everything there is a season.   Did a little bit of shopping, nothing too dramatic - some 15mm WW2 FOW blisters, some objective markers from Army Group North, a nice scenic terrain piece for LOTR, and a used boardgame.   Mostly it was just fun to see friends again, and to wonder why we all seem to be a little older.