I am closing out September with these six figures (seven if you count the wee bairn clinging to Mum’s skirts) who will populate the little Rohan village I am slowing building.  These 28mm figures are by Wargames Foundry, Saxon civilians from their Dark Ages line.   I thought they worked fairly well as Rohirrim, to add a bit of atmosphere to games where Isengard’s sinister forces raid the Riddermark.   I see great possibilities for Foundry Saxon figures as second line troops to augment the Riders, the Rohirrim equivalent of a fyrd.   While Rohan could field a larger proportion of cavalry per capita than more urbanized societies such as Gondor, it stands to reason that there would be some lesser folk who could not afford a horse and war gear, but might still be liable for service as foot troops and/or would simply need to defend themselves. 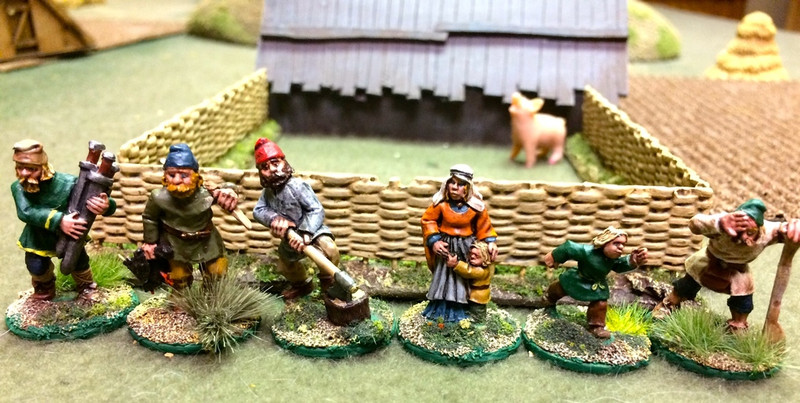 “Ware thee, Brythnoth, lest thee roam too far into the holt, and thee should meet orcenfolke!”   Of course, young Brytie will be the kid gallantly running back to warn the village, like young Conan in the first movie.  Hopefully he has better luck than young Conan, and doesn’t end up pushing a giant thingie around for 20 years for no apparent reason. 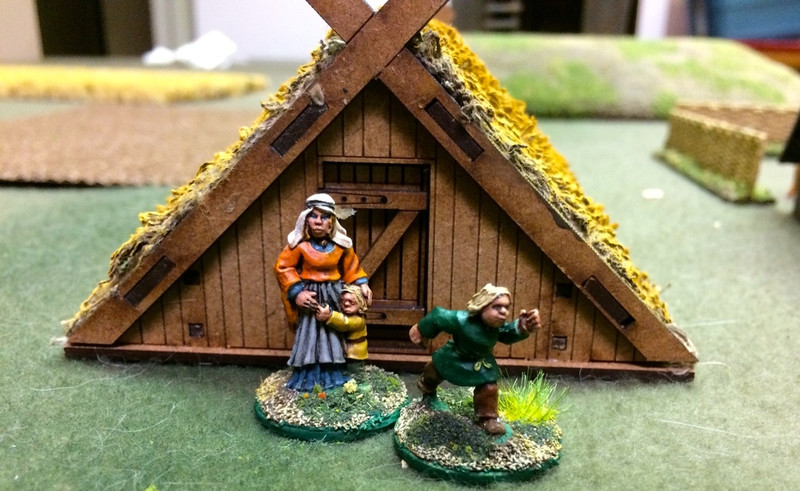 “Does not thy pigge Bakkonraed know any farer jests?”   “Nay, but certes yon’s a happy pigge." 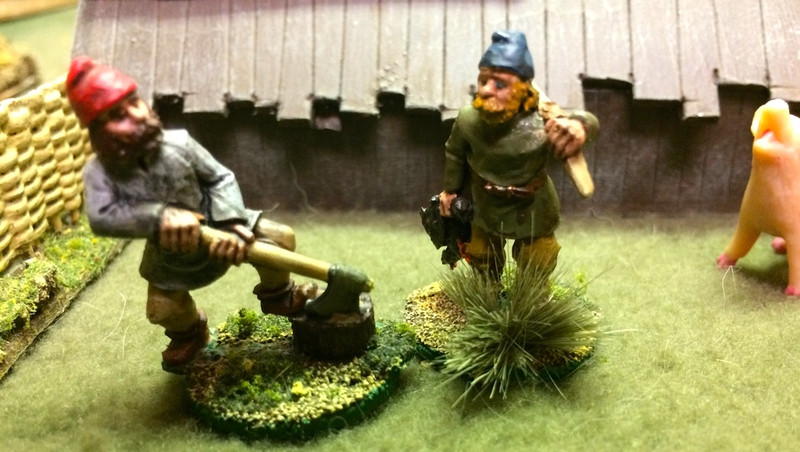 Ullric has carefully sharpened the village arsenal in readiness for fighting season.  I tried to give some of these characters green clothes as an echo of my Rider figures, to suggest a cultural or national colour, but didn’t want to paint them all the same way. 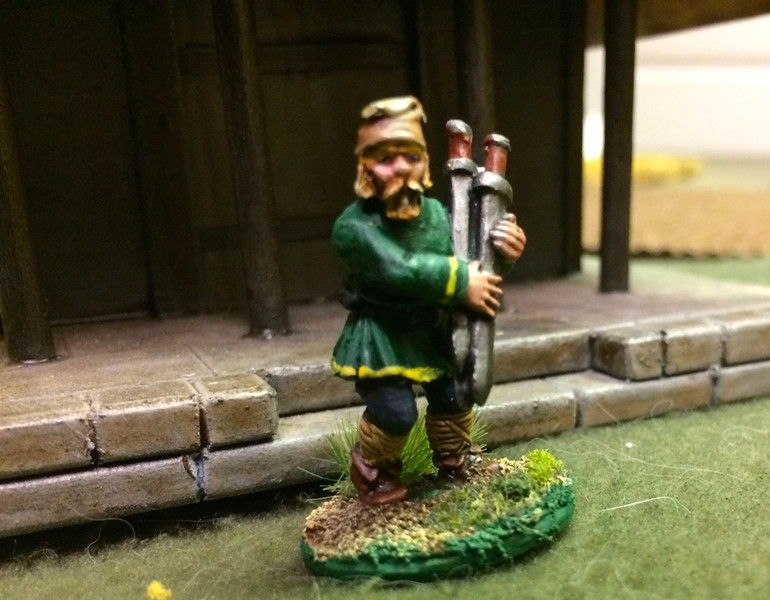 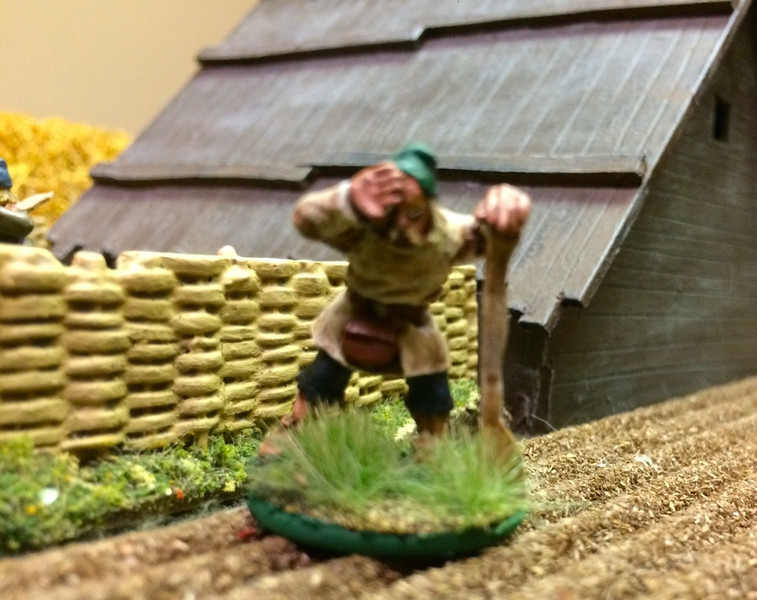 And finally, some shots of the completed watch tower which hopefully will keep these fine folk safer.  The template for this structure was first published in GW’s White Dwarf back when they were pushing their LOTR hard as they surfed the tide of the PJ films.   I sadly lost my copy, but I was able to find it after some digging around on the inter webs.  It is rather big, shown here against the buildings and 28mm figures, but I guess that’s the whole point of a watch tower. 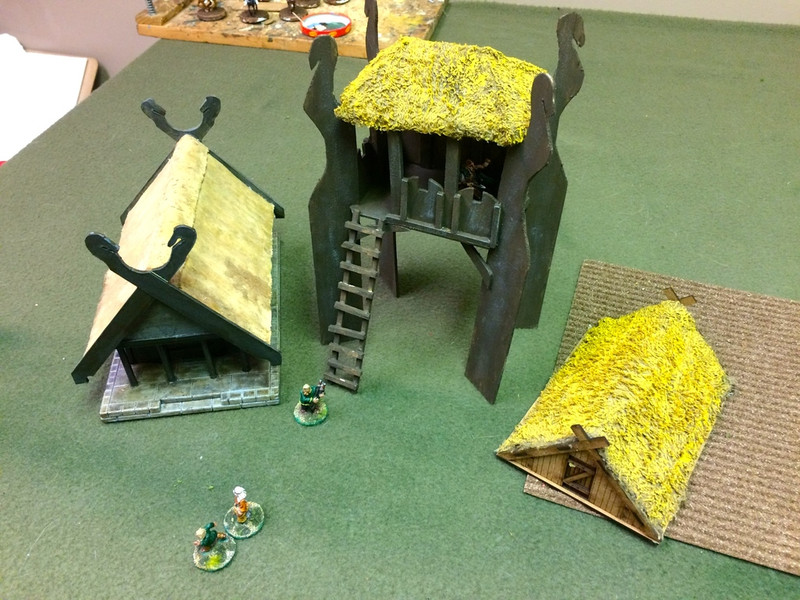 The roof is removable to place figures within, and the fighting compartment can hold six single-based figures easily.  The roof is made of a cheap coarse fibre wash cloth purchased at WalMart.  I dry-brushed it using my lessons learned from making the roof for the Sarissa Dark Ages house seen in the previous photo. 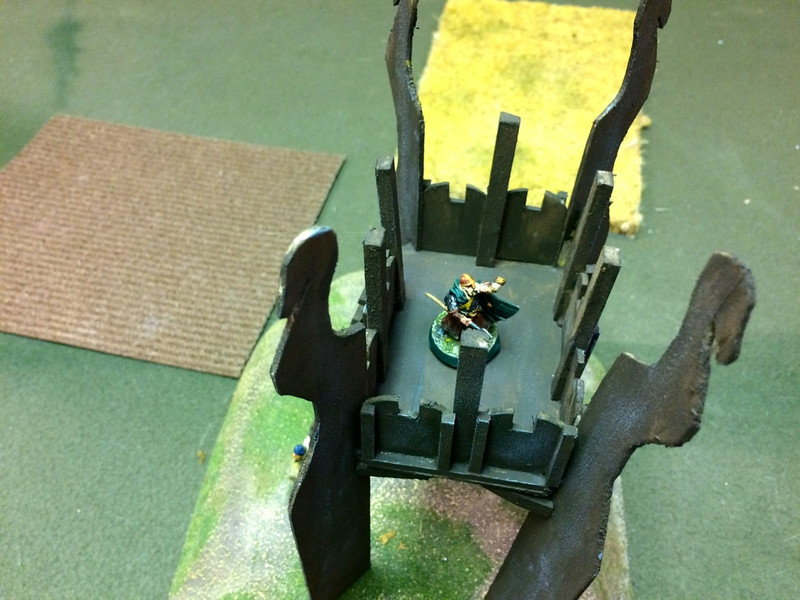 Thorstein, seen below, says that the villagers all feel much safer, even if the forced labour cut into his chicken plucking. 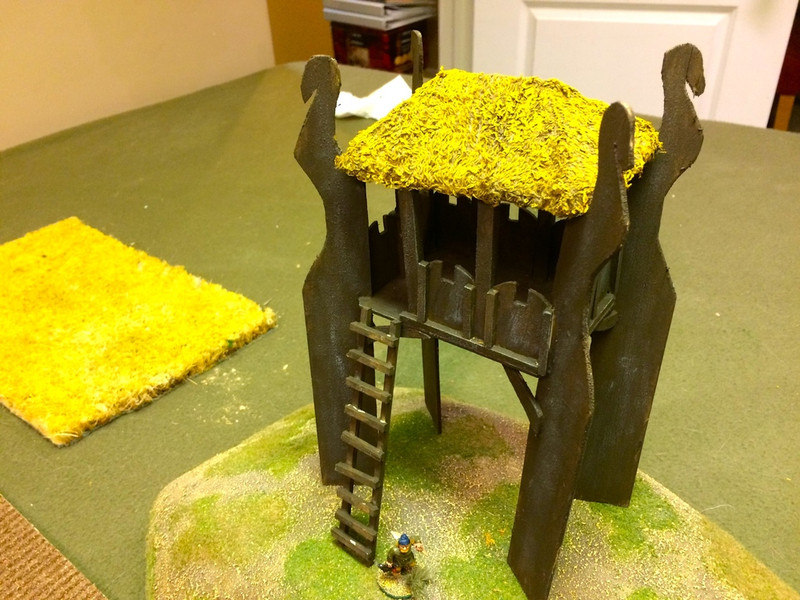 Thank you for looking and blessings to your brushes and craft knives!  Check back in sometime and see how the villagers fare.