A few months ago I posted some pics on a project to paint an old bed sheet to make a battle mat suitable for 6mm Napoleonics gaming.  The idea came to me on a train this summer, watching the German countryside go by.

I finished painting all the fields in a variety of shapes and brought it in doors.  It was quite stiff from the acrylic craft paints I used, even after putting it in the dryer a few times to soften it.   I spread it out on the gaming table and smoothed it out with my hands until it lay reasonably flat.

The idea was to suggest a variety of fields, with some just plugged or lying fallow, with various shades of brown, and then different types of crops in greens and yellows.   I’m not a farmer, though I have had parishes in the country, but I don’t claim any great degree of knowledge as to whether one would see these sorts of colours at any one time.  Madame Padre looked a bit sceptical, but granted me a degree of artistic license. 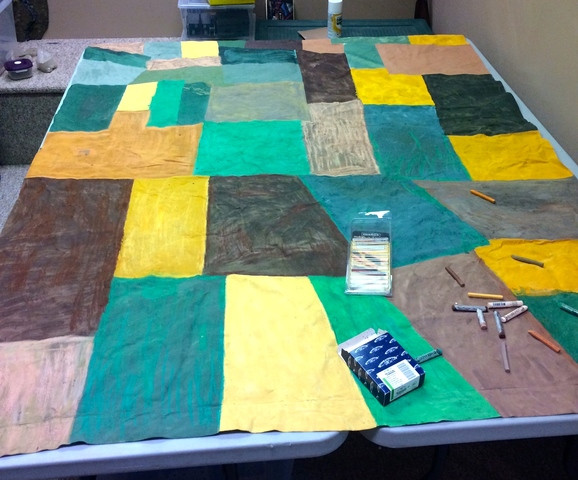 Since I had watered the paint quite a bit to apply it, there were many places where it had seeped through under the painter’s tape I had used to mark out the various fields.  I used various shades and types of artists’ pastel crayons to smooth and blend the field boundaries as much as I could. 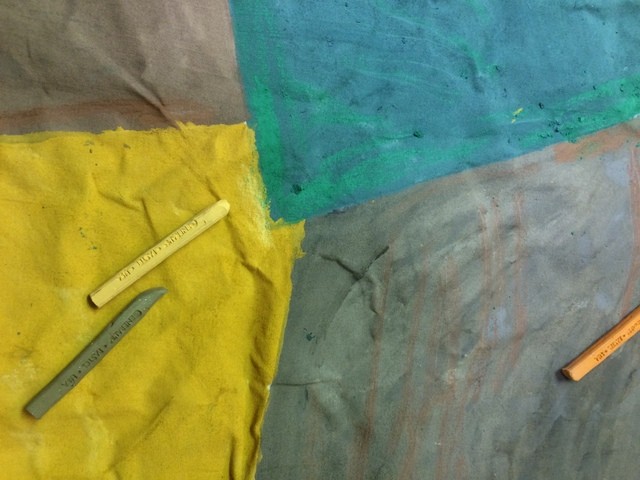 Covering the darker colours with the lighter ones didn’t work out perfectly, but it did begin to look better. 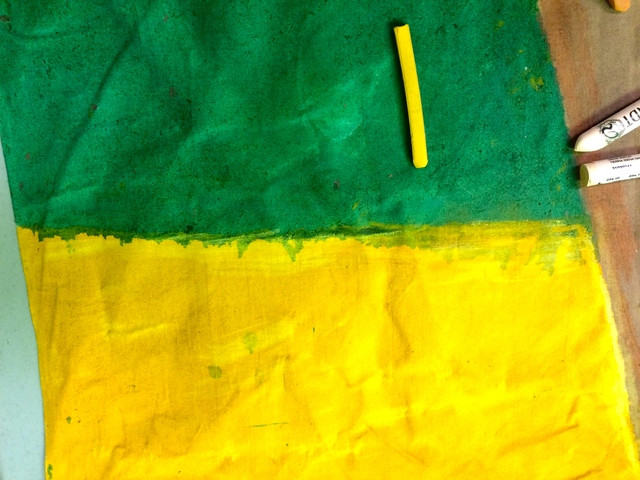 The only downside was that I ended up with a lot of dust from the pastel crayons.   I had to wash my hands a few times, and then ran my shop vac over the mat to pick up as much dust as I could. 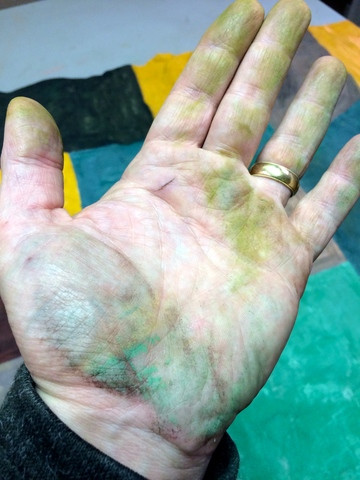 Now to prove the concept by laying out some terrain items. 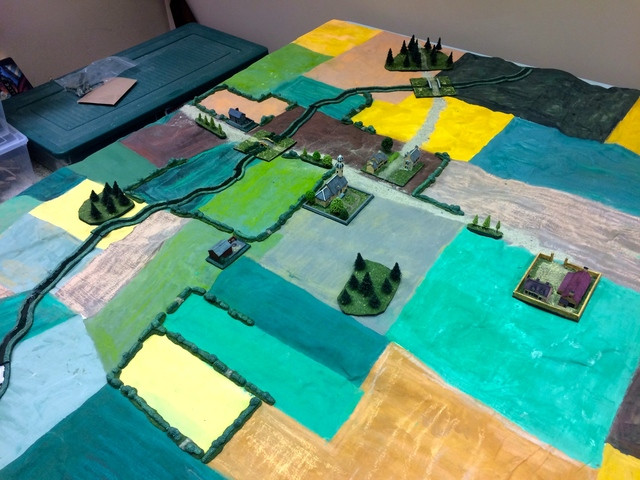 I think the size of the fields looks alright with the 6mm scale figures.   Here two of my Austrian regiments (or brigades, depending on the scale) prepare to hold the bridge on the Punkenbruch. 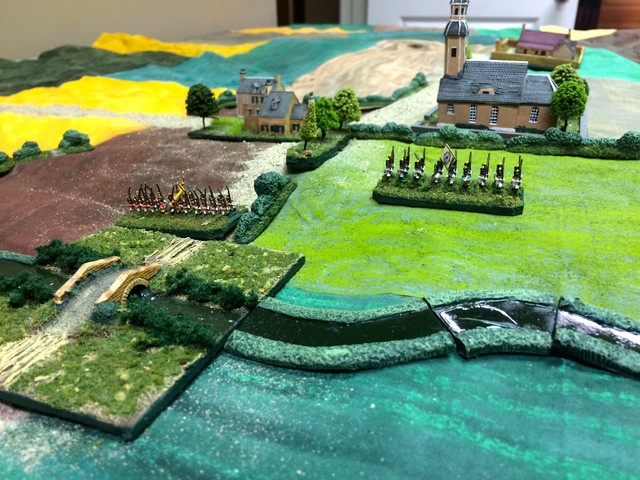 My original intention was to show the roads by laying down play sand, but I confess I don’t like the effect.  I think it looks rather messy, as the sand wanders all over the place.  I’m not sure what to do.  I could splash out on some resin roads similar to the river sections, or I could draw them using light colour pastels and draw over them later to change the look from battle to battle. 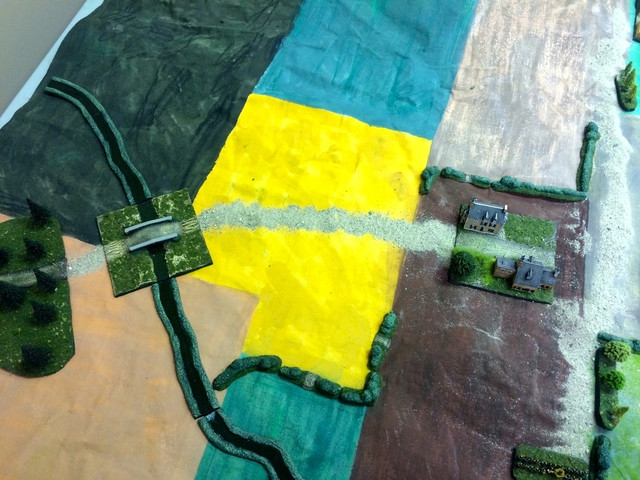 I put down some sections of styrofoam under the mat to create contours.  The sheet doesn’t cling to them, but it lays down flat enough that you can see the elevations well enough. 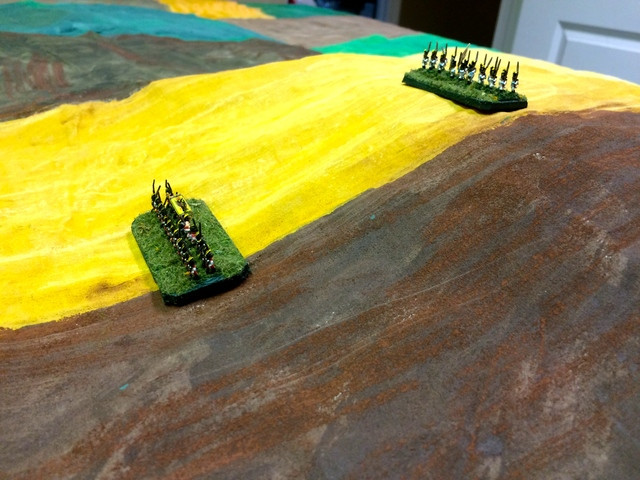 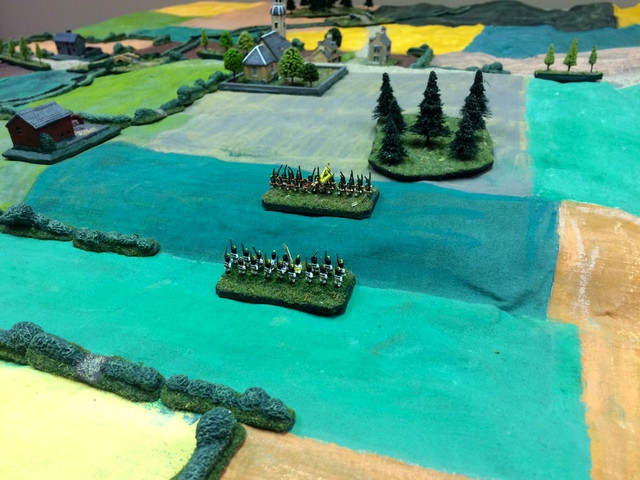 And when all is done, it even rolls up, after a fashion. 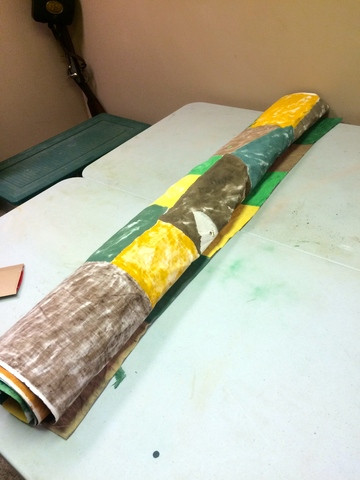 I won’t decide until I play a game with it, but I’m reasonably happy with my result.   Hopefully players won’t mind if they hands get a little discoloured, I hope.