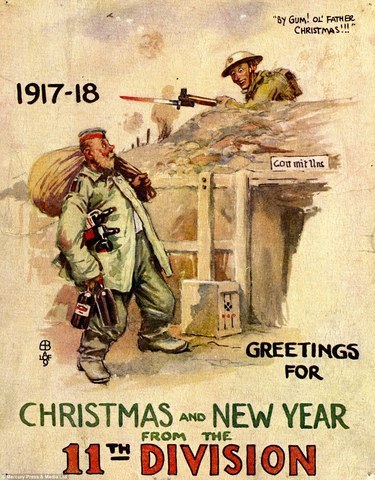 Goodness, I haven’t written a wish list to Santa since I was much much younger!   This year, since I’m involved in the Secret Santa project run by Chris and Catherine at the always interesting The Blog With No Name.  I have a target and I have started snooping that person’s blog for some hints, but the person is devilishly eclectic and it’s a bit of a poser.   I am sure I will think of something.  I am also part of Chris Stoesen’s Santa Clause project.  I have a target for that one as well, I received that person’s gift last week, and about to start painting it, though now I am all uncertain if it is what that person wants!

Now if MY Secret Santa is reading this, I do have some suggestions.  I’m taking a hint from fellow Posties Reject Ray R, whose own extensive wish list is totally shameless.

For my Weird War 2 project, I have a backstory that I need to tell involving werewolves in the Canadian Rockies, because … werewolves in the Rockies.  Any of the foot packs from fellow Canadian Bob Murch’s Pulp Figures’ Yukon Peril line, including any one of PYP 1, 2, 5, 6 or 7 would be most awesome, and that would be the cheapest in terms of postage, since Bob is just a few towns over (well provinces, and there are some Canadian Rockies between us).

For my Lord of the Rings project, any single pack from the Casting Room Miniatures Saxon range to make Rohirrim foot and/or levy.  Alternatively, any of the orcs from Sgt. Major Miniatures - they look cheap, cheerful and useful.

Any of the affordable packs from the Perry Brothers ACW line, including either of their camp sets (Union 1 of Union2), dismounted cavalry or horse holders from either side.

I am of course happy to receive whatever else you decide on, and which you think might surprise me.

Thank you kindly, dear Santa, for considering these ideas.