Hit and Mist: Playing Chain of Command With OP Martlet

If you listened to the recent Meeples and Miniatures podcast, you’ll know that Richard Clarke of Too Fat Lardies has been a bit distracted of late, but he has managed to put out a little corker of a campaign supplement for Chain of Command.

“Pint sized campaigns” are cheerful and cheap supplements to CoC, allowing players to fight a series of linked engagements, ladder-style, based on an historical incident.  They are affordable little gems (the same prize as a pint, Clarkie notes) and I chose Operation Martlet because I have the toys to model a British/SS matchup in Normandy.

Operation Martlet, a prelude to EPSOM, begins with a platoon of the Royal Scots Fusiliers probing towards the village of Fontenay on 25 June between 04:00 and 08:00.   Unfortunately the British have too problems.  First, as you see below, they have a fairly unforgiving amount of open ground to cross.  Second, their deployment is hampered by heavy morning mist, which requires each element wishing to deploy a 50% chance of getting lost per turn.  Each element that fails this roll twice is lost to the British player for the battle.

The British get a standard infantry platoon, with two Senior Leaders, a 2 inch mortar team, PIAT team, and three full sections.   The Germans get three sections, each consisting of two 3 man LMG teams.  As Stephen the German player remarked, “They’re just kids with a lot of machine guns!”  Spot on.   The Germans are reinforced by a single Panzer IV, which they widely chose to entrench in a hull down position as per the campaign rules’ support choices for the Germans.  The German took an extra full rifle team as a support choice, and got to reinforce one building on the map to create a bunker.

We used my 15mm collection this time, which made the table seem even bigger, emptier, and scarier. 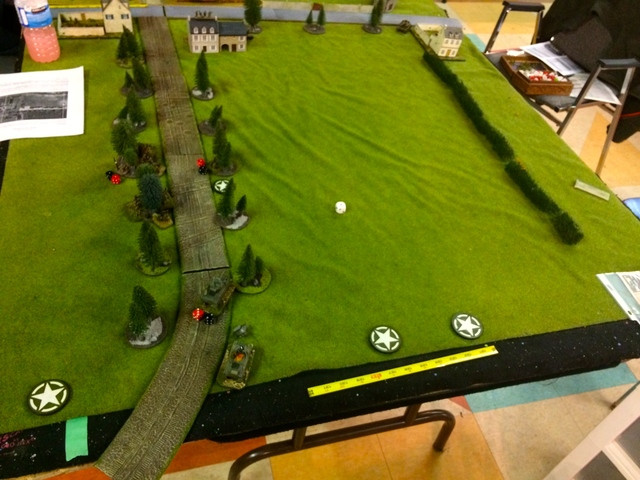 The German positions.  If the British can slip one team past the German setup line (the grey road in this photo) they win as per Scenario 2 in the main CoC rules. 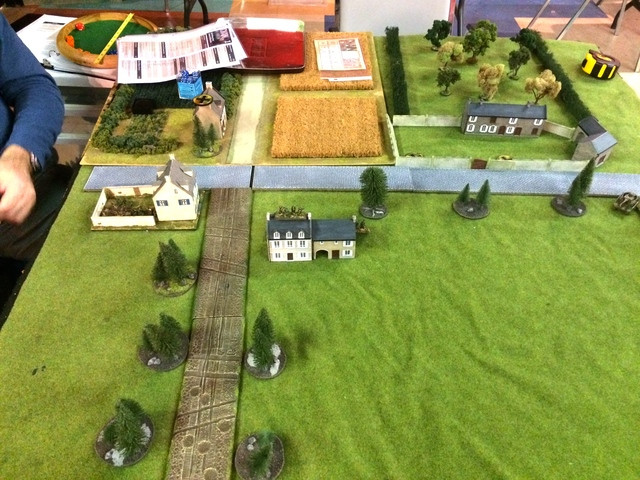 German jump off points.  Unlike poor Tommy, the Germans got a lot of cover as a result of the Patrol Phase.  We did make one mistake in setting up.   The double building left of the grey road and below the brown road was not supposed to be a building at all, but a local monument, a Calvarie.  Of course that was the building Jerry chose as his bunker.  A hard wicket for the British to start on. 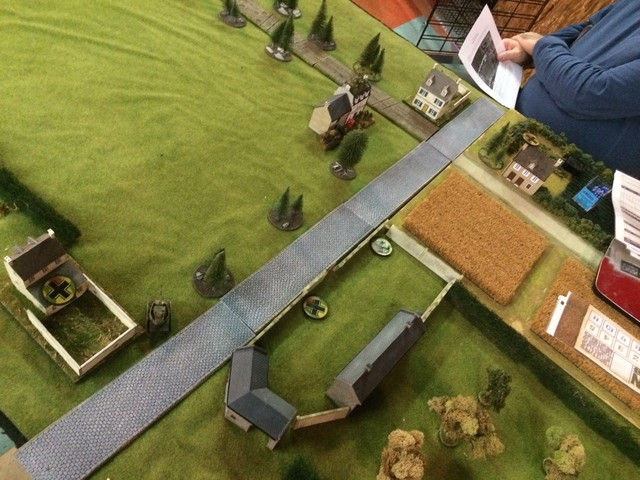 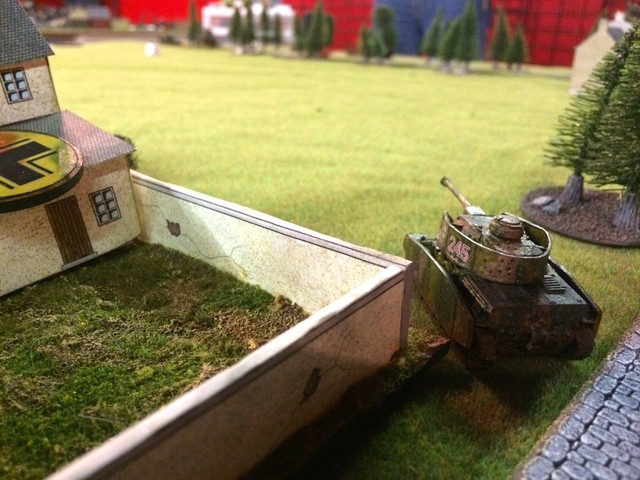 Bruce the British player soon regrets his support choices, 2 X M4 Shermans.  Both were at a disadvantage trying to hit the German tank hull down, a base 9 on 2d6.  One Sherman explodes, the other is hammered and shocked into submission. 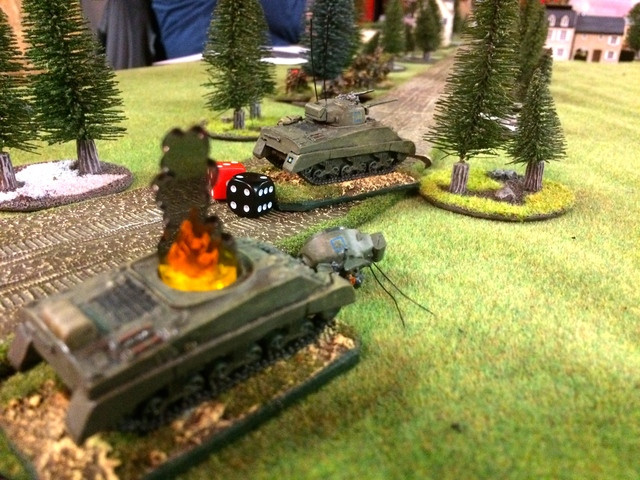 A full section, a senior leader, and the 2 inch mortar are lost in the mist and fail to arrive.  What infantry did arrive is hammered by MG fire from several angles and isn’t going far. 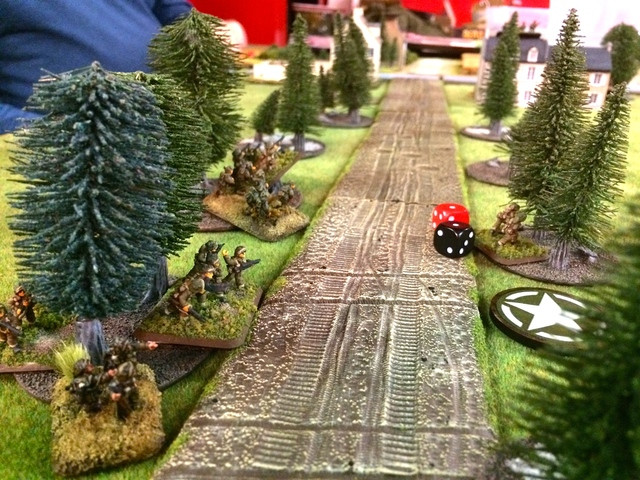 After about six game turns, the British player decided to abort his attack.   He lost three men killed, and has to use At the Sharp End, the Chain of Command campaign rules, to see who is available for the next battle.   Fortunately the Royal Scots have a mostly intact platoon to try again.  Will they try their luck again with the mist in the second campaign turn, from 0801 to 1200, or will they wait until noon for the sun to burn the mist off?  Time is working against them, as they will have to fight through this table and push on if they hope to win the campaign.  Perhaps different support choices?  If it was me, I would take every mortar option I could lay my hands on, and use as much smoke as possible to screen my advance.

Maybe we’ll have another battle, depending on what the chaps at the club want.

Despite a tough initial challenge to the Brits, Operation Martlet looks like a very valuable way to get more fun out of Chain of Command.