I mentioned in my last post that I recently visited Harpers Ferry, and of course, I couldn’t visit a National Park Civil War site without visiting the bookstore.  NPS bookstores are excellent, with something for everyone from the serious historian to kids.    I allowed myself one book, and it was a hard choice, but here’s what I settled on.

Since my visit to Antietam last year I’ve been very interested in the prelude to that battle, particularly the action at South Mountain.    South Mountain is a long ridge running north to south that separates the area around Hagerstown from the part of Maryland to the east.   When McClellan got his hands on Lee’s orders, as wrapped around the famous cigars, and had an opportunity to destroy the Confederates in detail, his first task was cross South Mountain via three passes or gaps as they are called locally.   These gaps were thinly held by troops under CSA general D.H. Hill, and because McClellan didn’t move with any great urgency, Hill was able to buy a day’s worth of time, allowing Lee to pick off the Union garrison at Harpers Ferry and concentrate most of his army in a strong defensive position along Antietam Creek.  It was not a big battle as they go, but it was a desperate affair fought offer difficult terrain.   As a reenactor long ago, I remember climbing part of the long steep slope up South Mountain around the village of Burkittsville in 2000 and getting quickly and badly winded.    And that was with no one shooting at me.

South Mountain was a hard fought affair, not as bloody as Antietam to be sure, but it saw two promising generals killed:  Garland, one of Hill’s brigade commanders, and Reno, a Union corps commander.

Most historians, like Sears in his excellent Landscape Turned Red, focus primarily on the horrific day of fighting at Antietam, but several authors cover the two weeks that led up to it.  John Michael Priest wrote an excellent account, Before Antietam: The Battle For South Mountain, that covers the moves and countermoves in detail and ends with the sun setting at the end of the day on South Mountain.  It is rich in detail, and would flesh out quite a few small scenarios for rules sets like TFL’s Terrible Sharp Sword.   There were a number of cavalry skirmishes in the first few days of the campaign that are quite exciting and well balanced.  The only problem with Priest’s book is that the maps are hand drawn and not easily deciphered.

The NPS rangers I spoke to told me that the new book by D. Scott Hartwig is an essential treatment of the days before Antietam, so it was my choice.   I’ll report back on it in due course, as soon as I finish my current guilty pleasure, R.F. Delderfield’s Napoleon’s Marshal’s. 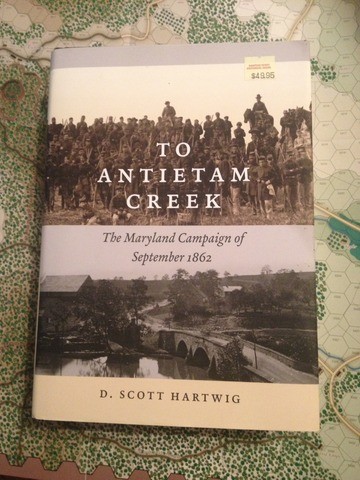 On getting home from West Virginia last week, with my copy of Hartwig tucked under my arm, what awaited me in the post but this? 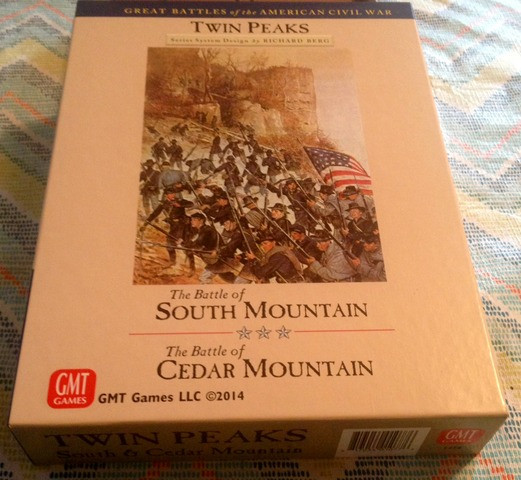 Twin Peaks is the first P500 game I’ve backed - P500 is sort of an internal Kickstarter for GMT fans and customers.   Once they get 500 people committing to the game, they charge 500 credit cards and get the game into production.   Very clever.   I was tempted by this game because it covers two battles, South Mountain, but also one of Stonewall Jackson’s victories in the Valley in the summer of 1862, Cedar Mountain, which I confess I know zilch about.  Two games in one box, using Richard Berg’s Great Battles of the ACW system, a direct descendent of the venerable Terrible Swift Sword from the 1970s, which I’ve mentioned here before.  That seemed like too good an offer to pass up. 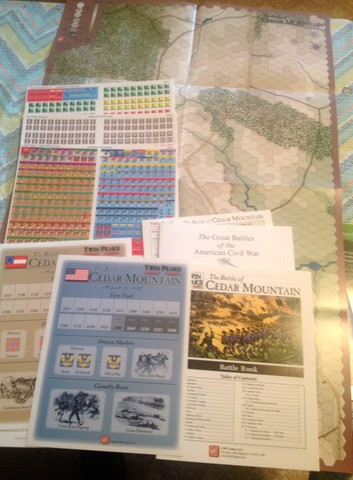 As you would expect of GMT, the contents are top notch.  Lovely hex maps, player aids and charts, and beautiful counters.   We really live in a golden age of board wargaming. 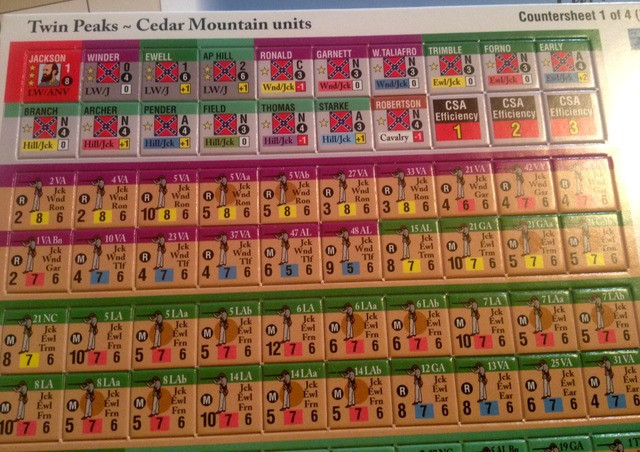 I realize that not everyone reading this blog is a paper and counters board gamer, and that’s fine.  However, one advantage of using a system like this to tell the story of South Mountain is that it would be a very difficult battle to do properly on the wargames table.    The number of contours and elevations, and the abundance of woods and tiny farms would challenge even a 6mm treatment of even part of the battle.  Most of our tabletop battles are fought on relatively flat terrain with a few hills tossed in as an afterthought.   South Mountain, like Chattanooga, was one of those big uphill battles fought on difficult terrain that would tax even the most dedicated gaming club to create.

I hope to report back on this game in the near future, but I’m still pushing blocks around in Afghanistan, so it may be a week or two.