Making Trees Out of Twigs, or, Scenes From a Wargamer's Marriage

I never have enough trees for my gaming table.   Either they all look the same (cheap railroad trees from a bag) or just forlorn and mangy (Woodlands Scenics armatures missing foliage clumps), and they never look like a forest, maybe a copse or a spinney (the English language has a surfeit of words for “small group of trees”).

Last winter, on a frigidly cold night, Madame Padre and I were leaving the local library, and she stopped, as she often does, to examine the garden beds.  The fact that she will do this, even in the dead of winter, is one of her more endearing traits, in my opinion.   “Can you use these for trees?”  she asked me, showing me a twig she had snapped off a bush.   It was hard to see in the dark, but it looked rather spindly.   “I could try,” I said, so we snapped off a bunch more and headed home, where the twigs then sat at the back of my painting desk for much of the following year.

“What do you think of this face?” I asked her the other night, holding up my latest masterpiece.  She glanced at it for all of a second.  “Too dark".  Madame Padre will be the first to admit that she’s not much interested in my “little men” and I knew that was all the feedback I’d get from her.  Then her glance wandered to the back of my painting table.   “You’ve never done anything with those twigs I found you” she said, her tone somehow both hurt and accusing, as if to say, “You never listen to my ideas".   “No”, I said, lamely, “but they’re working their way to the top of my to-do list”, which was sort of true and I had been looking at them the week before. 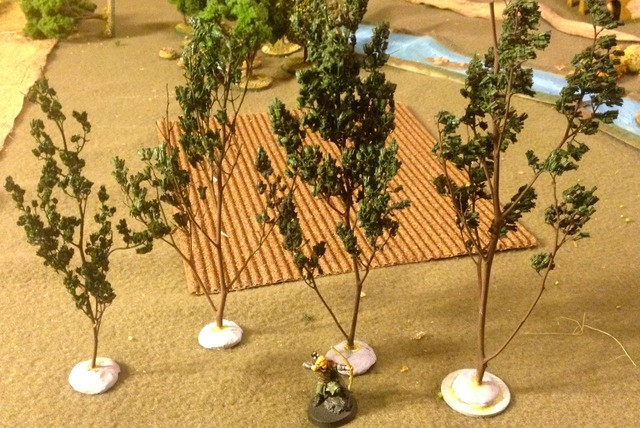 Legolas is (pardon the expression) dwarfed by the spindly trees of Mirkwood.

So, the following week, I went to a craft store, found a spray can of dark green paint, and blasted the four most useful-looking of the twigs.   Once dry, I took some dark brown craft paint and brushed it onto the “trunks” and those of the “branches” that I could easily make.   Then I put some children’s plasticine on washers, and stuck the ends of my “trees” in.    They are too tall for anything but 28mm or larger figures, and even then they would be big trees, 40-60 feet tall or so in proportion to the figures.   I suppose they could pass as poplars … I think there are some kinds of poplars that don’t have white bark.  I don’t know.  I’m not really that good with tree spotting. 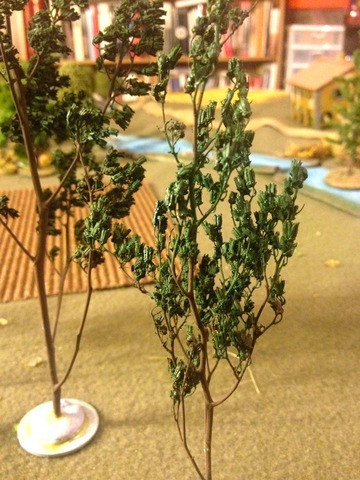 I’m not even sure what plant these twigs are from, exactly.  Madame Padre thought they were from Sorbaria, sometimes called False Spirea.   If you look up close, the green clusters are more like dried up seed pods than leaves, but from a distance they look ok.

I still need to flock the bases, but last night I couldn’t resist leaving them out on the gaming table, which lives at the back of our TV room, and was pleased when she noticed them.  “My trees!” Madame Padre cried out happily, then looked at me and her eyes narrowed.  “Did you paint those just because I complained that you were ignoring them last week?  You do have free will, you know.  I’m not an ogre”.  I didn’t take that remark seriously, it’s a standard move in her repertoire of verbal chess moves that keep me on my toes.  “Of course not, darling, but it was a good suggestion, and I’m glad I took it.  They do look splendid, don’t they.”  She glanced at them again, her face going neutral.  “I’ve seen you do worse”, she said as she wandered off.

Such is love.  And now I have four more trees …. and they are nice trees, I think.  Even if I’m not sure what sort of trees they are.