Messing On The Mississippi

“Believe me, my young friend, there is nothing - absolutely nothing - half so much worth doing as simply messing about in boats.” Rat, The Wind and the Willows, Kenneth Grahame

p>Early on a rainy morning in late June, 1862, and a Union force of three warships is steaming downriver to capture Island No. 6, a Confederate fort blocking passage to Bluffsburg, the last rebel bastion on the Mississippi north of Vicksburg. Leading in line astern is the tinclad USS Chaffee, her sister ship USS Golconda, and the Cairo class casemate ironclad, USS Ironton. Behind them is an unarmed steamer carrying the troops tasked with seizing the island.

The Union commander aboard Ironton, Captain Holquist, is surprised to see two ships emerging from the mist in the middle of the river, heading upstream. He immediately assumes that they must be the Confederate ships guarding Bluffsburg, the scratchbuilt casemate ironclad Joshua and her consort, the cottonclad riverboat Maccabbee. As per his SOPs he signals the transport to turn about and retreat upstream while he moves to engage.

Aboard the Confederate ironclad Joshua, Captain O'Donnell unleashes his escort, the fast sidewheeler Maccabbe, with instructions to use her speed to work around the union flotilla and distract where possible. As the two Union escorts alter course to port to pursue, Joshua's forward gun, a heavy rifle, opens up and hits Chaffee as she turns and presents her unarmoured broadside. First blood to the rebs as the rifled shot knocks out one of the two medium smoothbores on Chaffee's starboard broadside.

An unconvincing green tablecloth fills in to represent the Father of Waters as Maccabbee makes her run around the Union line, while Chaffee and Golconda try to catch her. Now that I've got the ships done I must think about scenery.

Ineffectual fire continues as the range closes. Maccabbee takes minor damage as her speed, far superior to anything else on the river, allows her to work her way behind the Union flotilla, and then come in hard and bows on Ironton's starboard side. Maccabbee's boilers are going flat out when she hits Ironton, causing both ships significant hull damage and locking them together. It is only the lack of a ram on Maccabbee's bow that spares the US ship from a fatal wound. At that moment Joshua passes alongside Ironton's port side, and the two ironclads unleash thunderous broadsides at one another. 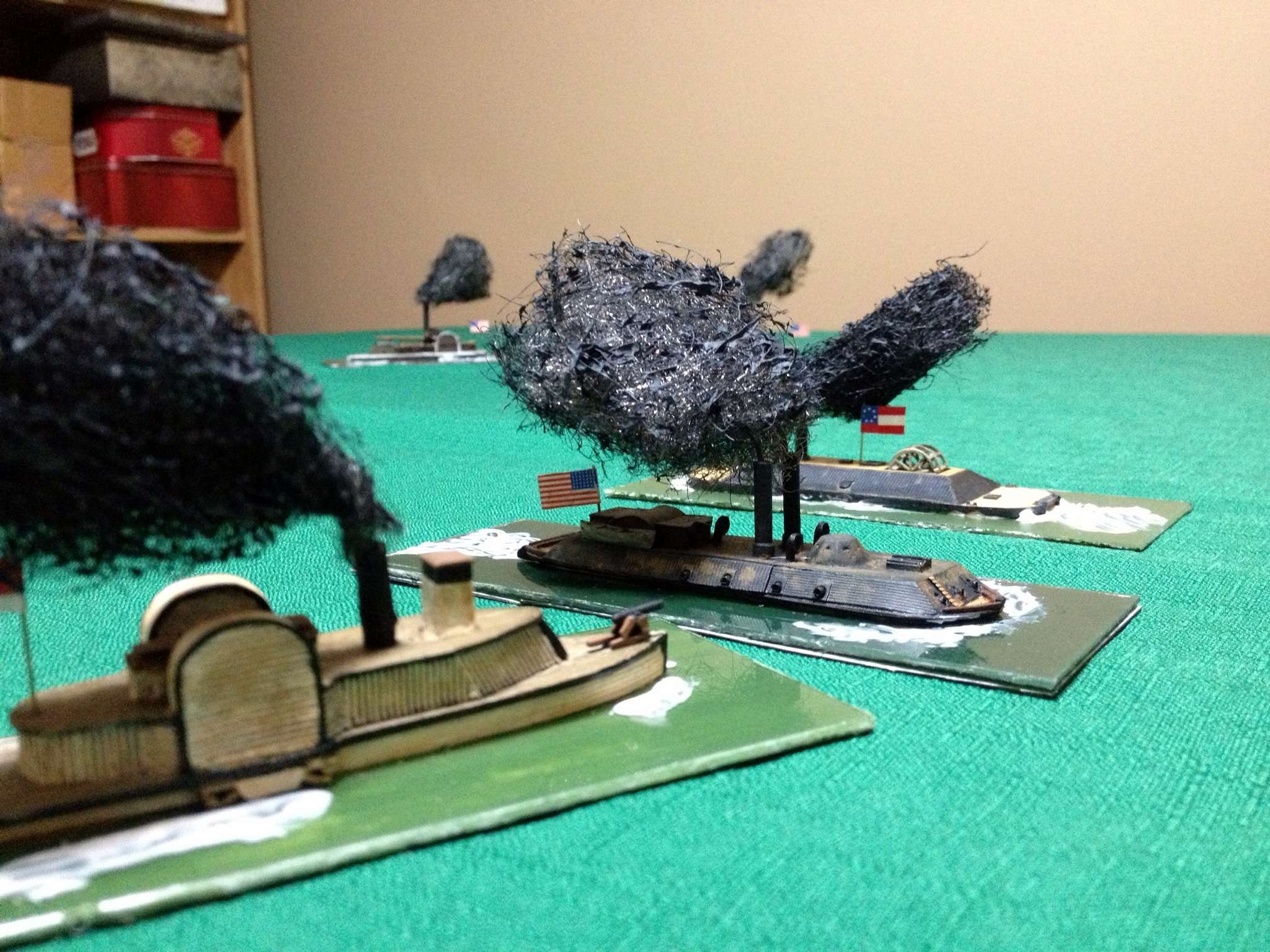 To Captain Holquist's dismay, point blank shot from his light rifles and medium smoothbores fails to penetrate the armour on Joshua's casemate, while a lucky shot from the rebel guns causes a critical hit, ripping a hole in Ironton's hull below the water line. The river begins to pour in. Meanwhile Ironton's starboard guns smash the hapless and fragile Maccabbee to bits and she begins to sink, still locked together. It is only the fact that Ironton is a larger vessel that keeps her from going under as well. 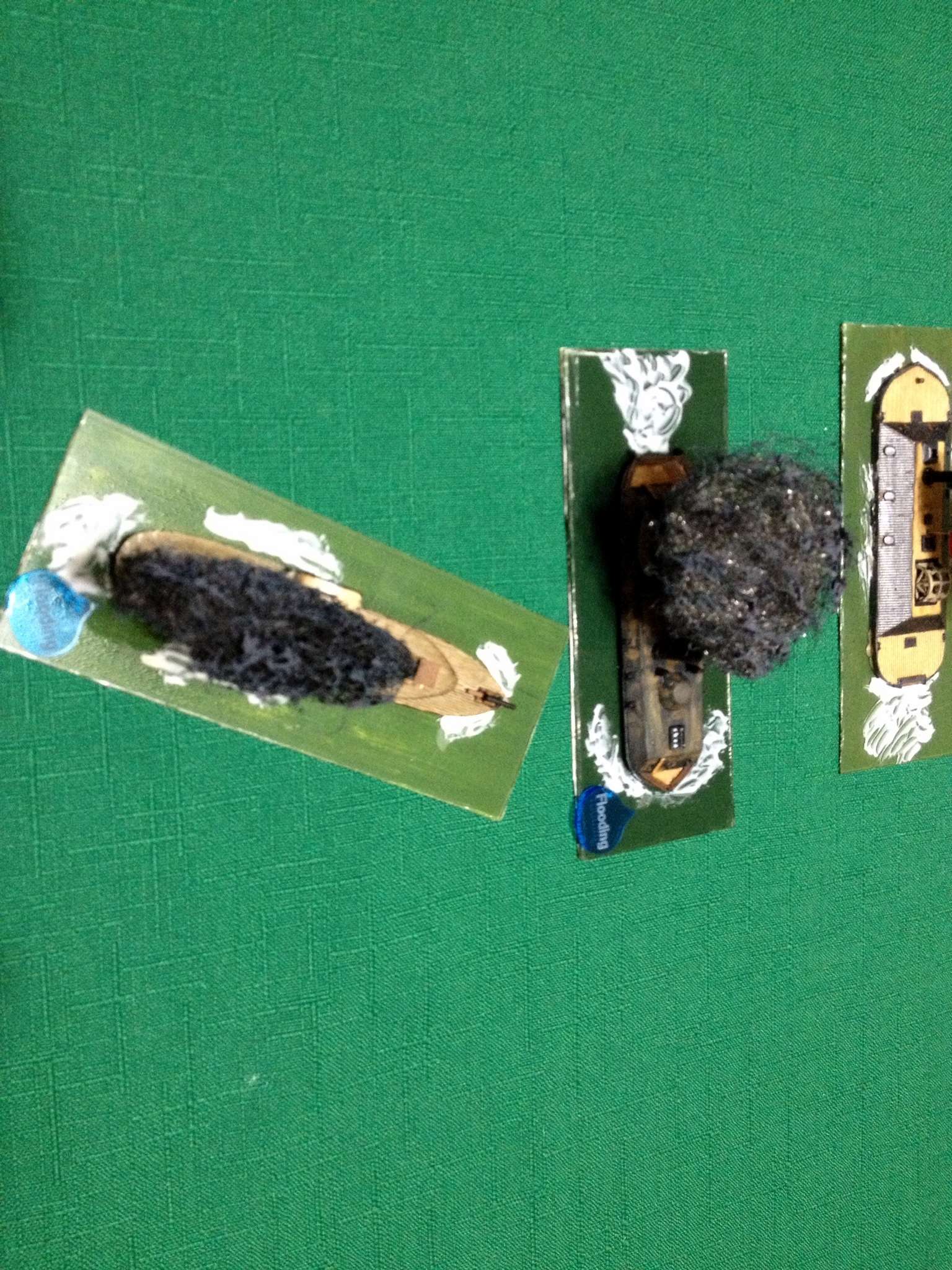 Joshua (top) steams by the unlucky Ironton, locked together with the sinking Maccabbee and herself taking on water. Note the very useful Litko "Flooding" markers.

The situation now goes downhill badly for the Union. Ironton and Maccabbee drift downstream and away from the fight. Ironton's critical hit is the worst possible result, a loss of three flotation points per turn (a 3 result on 1d3)and she fails three repair attempts in a row. While she frees herself from Maccabbee's sinking wreck, Ironton herself floods and sinks in middle of the the river, forcing Captain Holquist to watch the battle from a lifeboat. Golconda and Chaffee bravely engage the confederate monster, and Chaffee's captain desperately tries to ram Joshua, but causes no damage to her armoured stern and comes away much the worse, taking much hull damage. 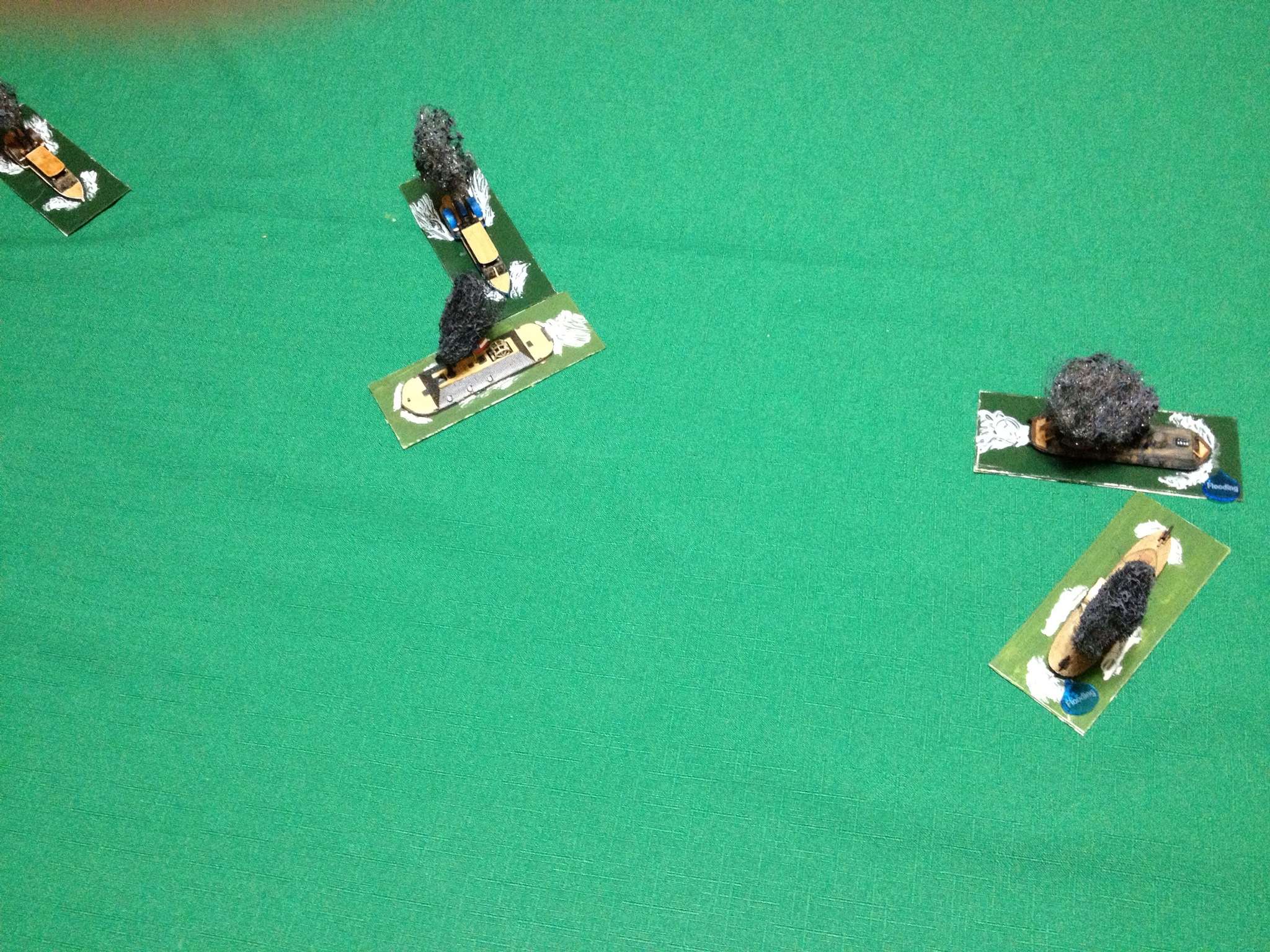 To the right, Ironton and Maccabbee helplessly drift downstream, sinking. In the centre, Chaffee, with the blue paddlewheel housings, attempts to ram Joshua, and only gives herself a bloody nose in the process.

A circling duel follows, and while the Union medium smoothbores largely fail to penetrate, they do get lucky. At one point Joshua suffered three critical hits, having her two starboard gunports jammed and her rudder cable damager, restricting her to starboard turns. However the Confederate damage control is excellent, with Joshua making all her repair rolls. Joshua enjoys standoff advantage, as her rifled guns can hit the US tinclads at short range, while the Union ships' smoothbores fire less effectively at medium to long range. Soon Chaffee has lost three of her guns, one sidewheel is nearly crippled, and her hull integrity is below 50%. She exits the Union table edge. Joshua is now between the Union table edge and the Golconda, who gamely starts her escape run. Alas, it is not to be. The Joshua's bow rifle smashes what's left of Golconda's stacks, and the lack of updraught to the boilers reduces her speed to slow, giving Joshua ample time to keep broadside on and pummel the tinclad, whose return fire is ineffectual. Within a few more turns the Union skipper strikes his colours.

With one if its precious Cairo class ironclads sunk, with one tinclad lost and another facing many days of repair, Union control of this sector of the Mississippi is gravely weakened. General Moore's orders to move by land on Bluffsburg depend on cooperation from the Navy, but with that ironclad monster Joshua roaming the river, his whole operation is undermined. His boss, Old Brains Halleck, will not be happy. Meanwhile General Hatcher, whose division is slowly being pushed back on Bluffsburg, will find that with his river flank secure, he can concenttrate forces with a better chance of checking the Union advance. The battle is thus a major CS victory.

At least, it would have been if this was a real fight. This AAR describes my first attempt to get to know the Smoke on the Water rules from Canis Publications. The website for these rules claims that SOTW does not sacrifice realism for playability, and I have to agree. Other than a few head scratching moments with the collision rules (and things seem to collide a lot, even when playing solo and making probability rolls for individual ship moves), the mechanisms seemed easy enough, and the result seemed right.

What I need to work on here is play balance. I had historical ship stats for Ironton (a fictional member of the historical Cairo class), Chaffee and Golconda are based on the historical Fort Hindman class of tinclads, and Maccabbee used the stats for the CS Planter tinclad. Joshua however is a creature of my campaign, and I think I erred by giving it the stats for the CSS Tennessee, which was a pretty fearsome customer. Bluffsburg is supposed to be a minor town on the Mississippi, a mini-Vicksburg, and I doubt her workshops could produce such a monster. I need to reconsider her armament and armour before turning her loose for real, because as the above illustrated, a whole campaign can hang in the balance while people go messing about in boats.

Thanks for reading what has been a bit of a departure for this blog, namely its first naval AAR! AAARRRRRGGHHHH! Mike