Saturday night my mates in Stratford, ON, put on another game from the crazed imagination of Dan Hutter in James Manto's Basement O'Rabbits. The scenario was an episode in the Yugo partisan war - a local villager, upset that the partisans have stolen/liberated three of hs milk cows, have ratted them out to the Germans. A scratch force of SS Prinz Eugen infantry and German-friendly Domobranci thus descended on the hidden partisan farmstead in the mountains.

Regulars here might remember my pics of Dan's "Polikarpov Down" winter game from earlier on this blog. Again, the real star of this game was Dan's winter terrain, but this time it was seriously upgraded.

Remember to click on the pictures below for a larger view.

James (Rabbit Master) Manto with the complete table. The trees and the mountains are all Christmas village stuff that Dan bought at post-Xmas clearance sales from local department stores:

The partisan-held village - models include the Airfix ruined house/command post and the Faller/Model Master forge/barn. The long structure is I think a covered bridge from a Christmas village set. The yellow discs are poker chips marking the partisan blinds:

German scout's view of the village from behind the mountains: 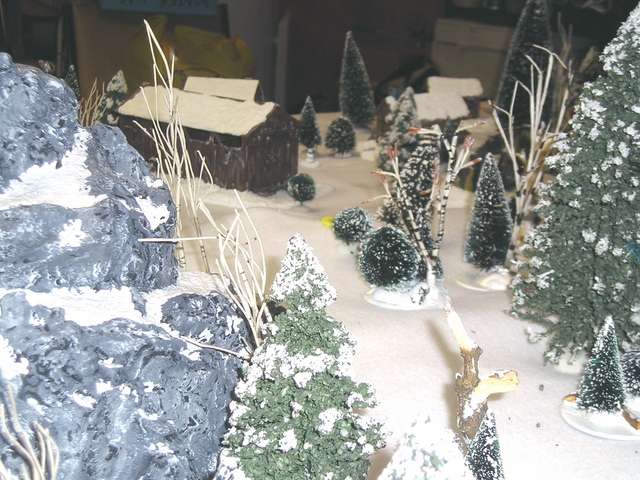 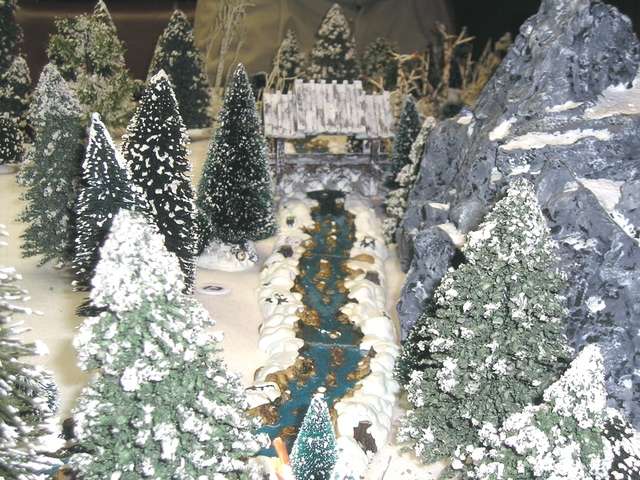 The German scouts see a sign that the partisans are indeed in the village :) 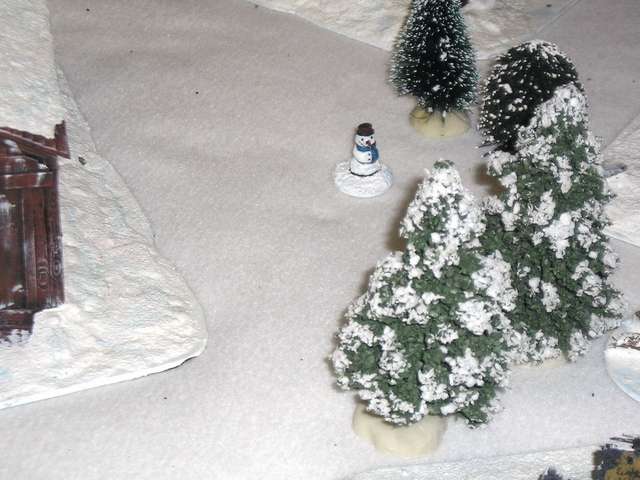 OK, the game. Dan used homebrew rules with lots of blinds and spotting rules. Brett took the Domobranci (pretty crappy troops) infantry and LMG sections and came at the village from the right table edge (across from and to the left of where James is sitting in the first picture). Brett also took one SS infantry section and an SS sniper. I took the other SS inf section plus the SS LMG, mortar and HQ sections and our AFV asset, and went up the little road for the bridge. Our plan was to put pressure on the village from both sides and keep them guessing where our main attack was coming from as long as possible.

Walter, James and Lorenzo concentrated the partisan forces in the village, though Walter had one small section on the far side of the river as a picket.

Figures are all Dan's. I have no idea what make they all are - bit of everything.

Domobranci come out of the woods as the first attackers: 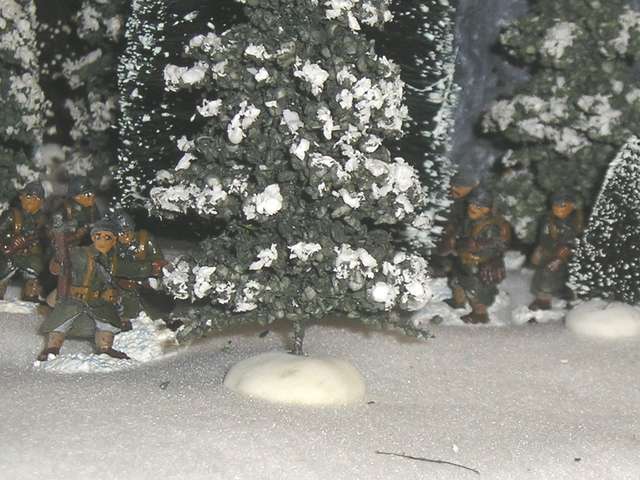 They engage a partisan section holding a ruined house:

Partisans are also harrassed by Brett's sniper in his mountain aerie: 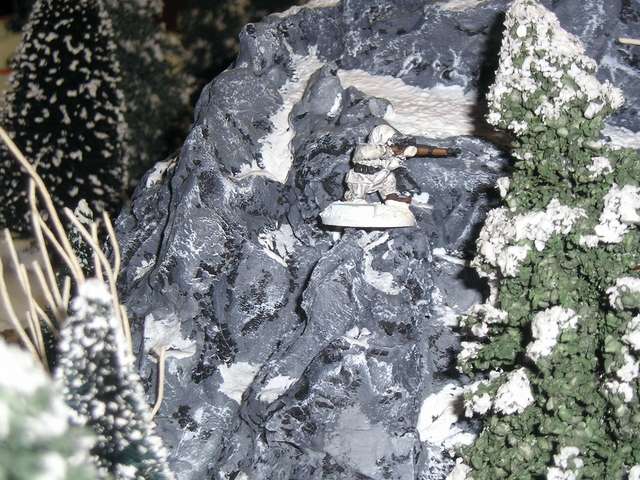 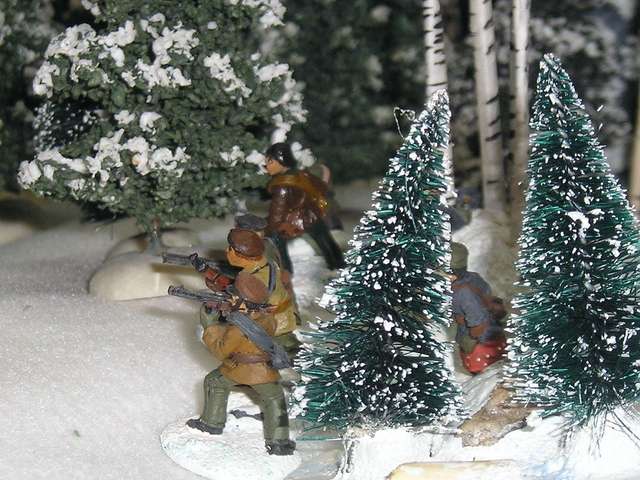 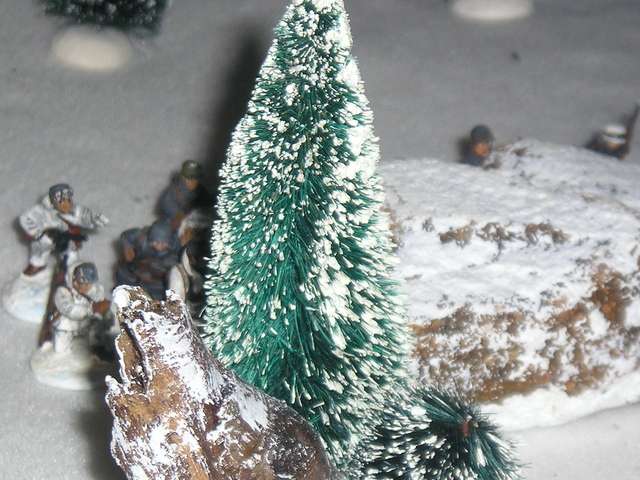 Captured French Renault in German service tank advances on the village, as seen through the trees by the Partisan ATR team that spent much of the game trying to stop it: 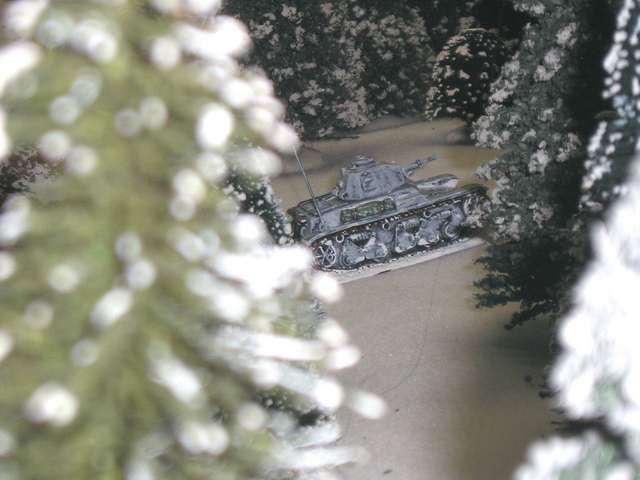 o make a long story short, the Domobranci did better than we hoped, pinning down and eventually eliminating one partisan section - definitely the Axis stars of the game. Brett's SS section uncovered a partisan bunker, and spent the rest of the game trying to reduce it. Gefreiter Hans Klutz fumbled a grenade and eliminated himself, but the rest of the section got stuck in and at game's end the defenders had no where to go. My SS section skirmished with Walter's partisan pickets, and then closed on the barn, where a large partisan section was identified. The partisans slowed the Renault (James was terribly unlucky with his Anti-tank rifle), but by the end of the game concentrated fire from the Renault, the SS LMG, mortar, and infantry were whittling down the barn's defenders. After four hours we called it a night and the partisan players slipped their surviving forces away. The Domobranci liberated a supply of slivovitz and were hopeless for any pursuit.

Some good lessons learned, which Dan will incorporate into his reprise of this game at Hotlead (Canada's Finest Miniature Gaming Event - TM) in Stratford at the end of March (http://www.hotlead.ca). Hope to see you there. Look for the padre with the frostbite and the Slivovitz.
Posted by Mad Padre at 4:55 AM