Thanks to my friend Raivo for sending me this link from the Onion.com. I'm allowed to laugh because I've been (and still am, I guess) a civil war reenactor, which ranks slightly lower on the scale of attractiveness to women than being a miniature wargamer.

For proof of this assertion, I offer as evidence a photo that another friend took recently while at Gettysburg. Apparently some sort of reenactor appreciation day was happening and these fellows kindly offered to pose for the camera. 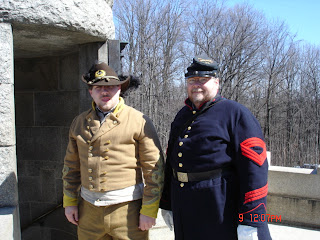 I suppose it would be worse if these fellows were wearing "Liebstandarte Adolf Hitler European Tour, 1939-1945" T shirts, eating Doritos, and debating who makes the most kick-ass 20mm King Tiger tank. Or maybe if they were Waffen SS reenactors at a wargaming convention, crammed into XXXL Oak Leave camo smocks, eating Doritos. Send 'em to Iraq, I say.
Posted by Mad Padre at 11:28 AM