I experienced a moment of sadness and nostalgia a week ago. I was sitting in a Second Cup in Ottawa, reading the Globe and Mail over breakfast, and came across this piece on the passing of Gary Gygax.

Gary Gygax was a big part of my teenage years the way that rock stars and sports figures were big with other kids. He was one of the creators of Dungeons and Dragons, or D&D, the game that has garnered such pop-culture tributes as the song "It's Great to Be A Nerd" by Canada's own Arrogant Worms (We hate watching sports ’cause we’re reading carl sagan / But we’d watch the olympics if they played dungeons and dragons (I’m a hobbitt! ha ha ha ha!).)

If you played Dungeons and Dragons in high school, you were a happy defector from the cliques and blocs that ran your social world. With some like-minded friends, you could retreat to an alternate universe of the imagination, albeit, a world that was drawn on a template from Tolkien's The Lord of the Rings or Robert E. Howard's Conan books.

I recall the spider-infested room in my parents' basement in Courtenay, BC, where my bemused mother would kindly bring down trays of tea and hot biscuits to "her boys", as my brother and our friends would gather for role-playing sessions that lasted late into the night. We explored dungeons, battled ghouls, searched for treasure and told stories about our alter-egos. It was great fun. The investment in equipment was fairly minimal, graph paper and polyhedral dice at first, but as the Advanced Dungeons and Dragons books came out, along with miniature figures, the owners of Courtenay's Roundel Hobbies made some money off us. We painted the figures, at first in clumsy oils, and I remember my astonishment when I saw what you could do with acryllics and drybrushing.

My daughter Anna pointed out on the phone the other day that she owes her life to Gary Gygax, as I met her mother at a D&D game while we were both undergraduates. I hadn't thought of it that way. Anna, who marches to her own drummer, is curious about D&D but hasn't found anyone to play with.

Anna once asked me if I had any of my D&D books left from college days. Sadly not, though if I had I might have tried to flog them on Ebay, as I recall once having some of the first edition Gygax books. However, I did recall still having somethign in my wargames library, and found this. 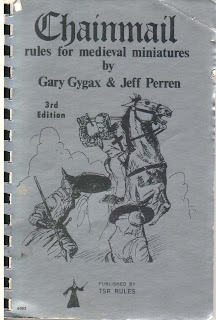 Chainmail was first published in 1975. This edition, the 3rd, is from 1979. I've never used these rules - if you have, let me know. And no, they're not for sale. In glancing through them, I was delighted to find that there is a fantasy section, if one wants to see how Swiss pikemen do against elves or such. It got me thinking of a conversation I had with my friend Pete about the inadequacies of the Games Workhop Lord of the Rings rules for large-unit combat. (A lot of D&D players, I am sure, wanted in their hearts to graduate from scuffles with orcs in some narrow dungeon to refighting the battle of the Five Armies or some such Tolkein epic -I know I did back then). One day, God knows when I'll have the time, I'll put my Uruk-Hai and Rohirrim down and try these rules. I'll certainly report the results here.

So rest in peace, Gary Gygax, and thanks. It's great to be a nerd (and the father of a nerd)!
Posted by Mad Padre at 6:15 AM