It’s ben a while since I finished a complete unit, but today I commissioned this unit into service, Frederick the Great’s Muskteer Regiment 2 (Kanitz), 31 28mm castings from Foundry.   I’ve given them a level of attention that I don’t usually pour into my large batch painting, and I’m reasonably pleased with the result. 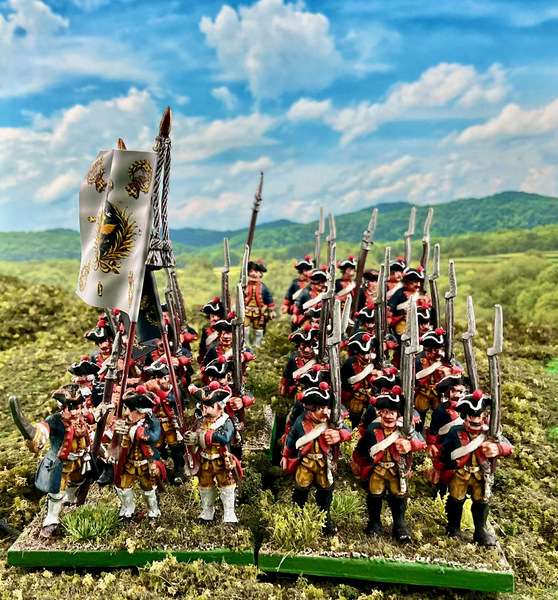 These first two photos tuned out quite well, thanks to a trick I learned while listening to Ken Reilly of the Yarkshire Gamer podcast interview Australian painter and game Stephen Wold (@oldwargamer on Twitter).  Stephen mentioned that one of his secrets was using a laser printer to create a background, some photo of a sky cloudscape found on the web, and put it at the back of a lightbox alone with some basic terrain like a fence or hedge.  I stole this idea totally, using a backdrop of hills and clouds, and then scattering tons of my basic flocking mix around the figures.  A bit of styrofoam created an elevation for some contrast in the heights of the figures.   Stephen said that this is a simple trick to make ordinary figures jump out at the viewer, and my goodness, it worked a treat! 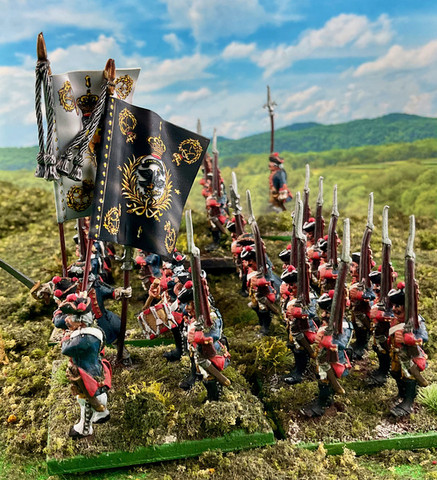 Of course, the old saying is faces, bases, and flags.  Not sure about the bases and the faces, but for the flags I like to pay for the best, and the best I know of are done by Adolfo Ramos in Spain.  For the SYW period, I like to put six figures on a base, to capture the sense of close-packed ranks that you see in period paintings and woodcuts.

For uniform guides, I used the excellent Kronoskaf website and its entry on this regiment as well as Haythornthwaite and Fosten’s Osprey book, Frederick the Great’s Army (2), Infantry.  The regiment was first raised in 1655 and had significant battle honours during the SYW, including Gross-Jagersdorf and Kundesdorf.

This was my first unit to be done consistently using the Foundry paint system.  Honestly, there are times when I wondered if i was wasting my time trying to achieve their desired effect on the wood stock of the muskets, the gun metal of the musket barrels, or the black leather of the cartridge boxes.   I am happier with the three tone red on the cuffs and turn backs, and the Foundry flesh tones are enjoyable to work with, though next time I’ll work harder on the eyes, which I think as done here detract from the overall look of these figures. 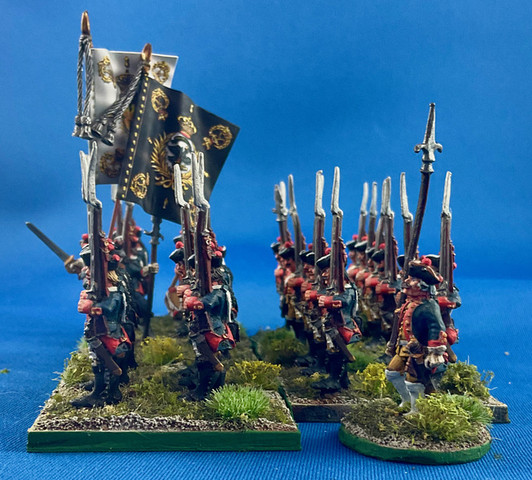 I had quite a lot of fun painting this senior NCM and basing him singly as the RSM, in case I want to use these figures in a Sharp Practice game. 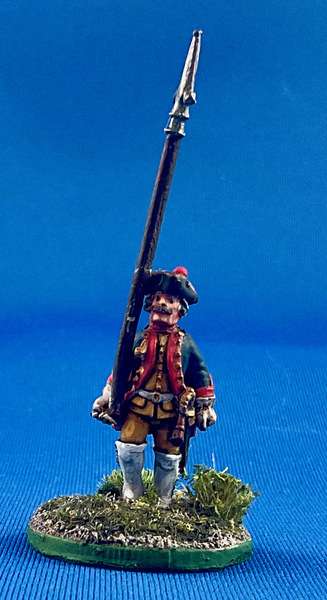 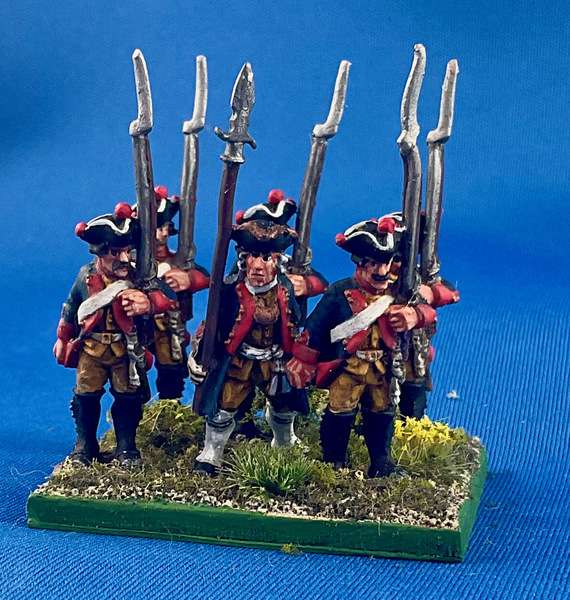 The Seven Year War was one of the first periods that I started wargaming in, and still appeals.  While I’ve decided to do Napoleonics in 6mm, 28mm seems like the scale I want to work in for this period.    I have some Foundry Russian cuirassier on my workbench, and then a battery of Front Rank Prussian guns to do next.

Cheers and thanks for looking.   Blessings to your brushes!