Today I’m celebrating my renewed interest in this blog with a new look for the header and a bit of a plug for one of my favourite artists.

I discovered Tim Godden on Twitter a few years back and was immediately captivated by the poignant simplicity of his Great War artwork.   Tim’s characters are human, often youthful, and heartbreakingly vulnerable.   The art doesn’t hit you over the head with a message, and it seldom displays actual combat. It doesn’t have to.  Like the film sequences of the laughing, snaggle-toothed soldiers in Peter Jackson’s They Shall Not Grow Old, Godden reminds us that these were real people, with real hopes, fears, and emotions. 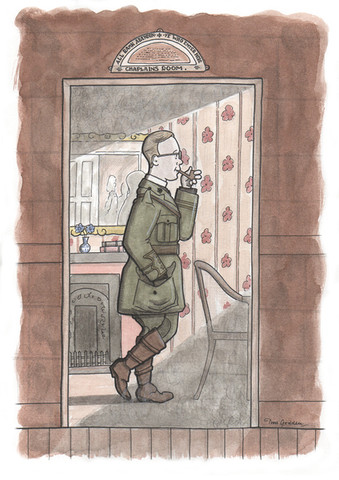 The image on the left of the header is one I personally commissioned from Tim, and depicts one of the famous Great War padres, Tubby Clayton.  It shows him as the kind host of Talbot House, or “TocH” as it was known in the War.   If you’ve ever been to Poperinge, Belgium, you probably know about it.  The image on the right of the header is entitled “Soldier Scholar” and I think we can all relate to the young man reading the book.   I also like the fact that both figures in the header are smoking pipes, a practice I have, sadly, discontinued but long enjoyed.

I have a triptych of Tim Godden prints in my war-games room.   The image on the right, though it didn’t photograph that well, is entitled “His First Night Patrol”.   I love the harsh geometry of the flare and the fragility of the three figures.  Will they make it back? 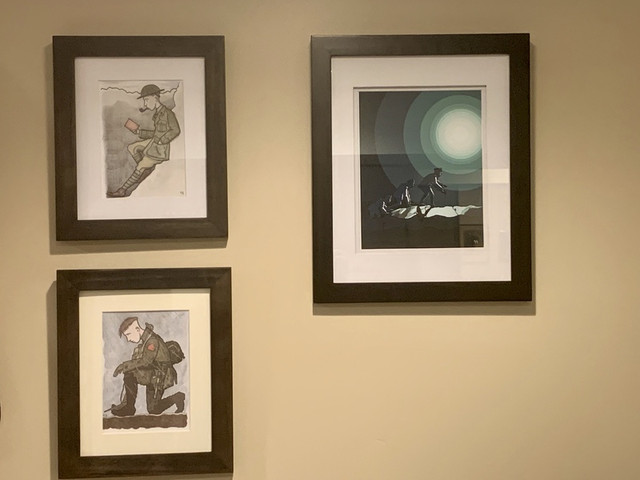 The figure on the bottom left shows a young Canadian soldier reflecting on his experience at Passchendaele.  The rain and the mud and his lost expression are highly evocative.  It was in my office for a long time, but as I prepare to retire in a year I’ve started moving things home.   This print seems a good addition to the games room, to remind me about what war-games actually speak of. 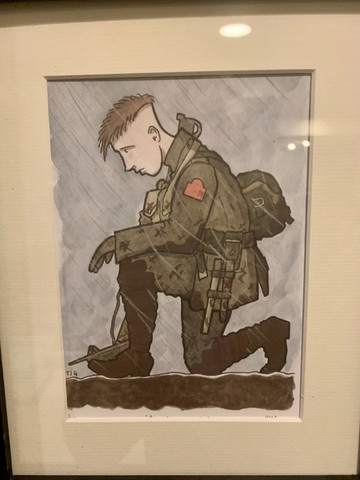 Finally, in our kitchen upstairs my fiancee Joy agreed to let me hang another triptych of Godden’s work, showing three Great War soldiers with cats.  Tim tells me that his three cats all agreed to be models!  Joy, who is very much a dog person, says the three images remind her of me, the cat-loving soldier she allowed into her life.  I am pleased that she likes them. 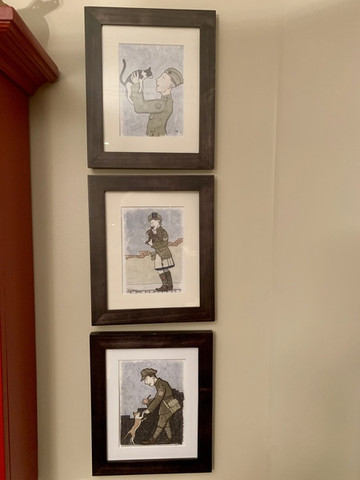 You can follow Tim on Twitter @TJGodden and you browse and even buy his artwork here.  Be warned that browsing may cut into your war-games budget, but I hope you will love his work as much as I do.