Here are yet more scruffy, nasty, flea-bitten, root in-tootin, cattle steelin, mean feel in, smelly, yelly and generally unpleasant barbarians, the last of the Vendel Hillmen from my big order this year, and my second entry in this year's Analogue Hobbies Painting Challenge. 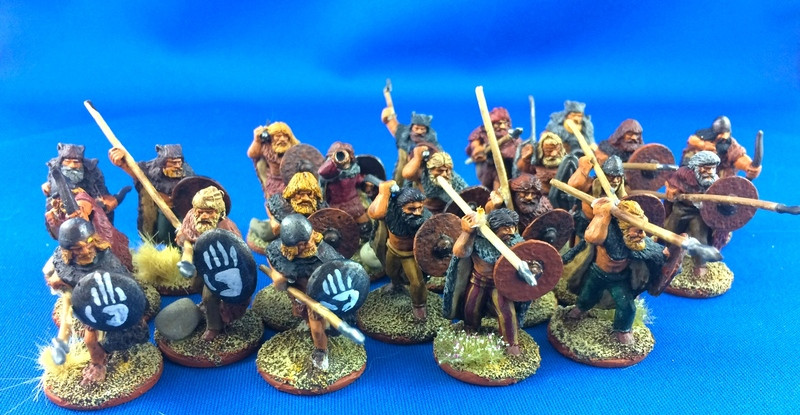 Eleven chaps with spears.  Included are some more high tech metal shields with the White Hand device supplied by Saruman’s quartermasters, though the Dunlendings, being conservative folk as are most barbarians, generally prefer their hide shields.

Stab for Saruman and a Free Dunland!

And finally a musician and six fellows that I equipped with choppy things.   After I upended a tray containing all the spears supplied by Vendel with the figures, I was inexplicably short six, and after multiple searches decided on raiding the sprues in my bits box to find some orc swords and a Gripping Beast axe.  It give the force a pleasing variety, I think, as I had already finished twelve spearmen from the original test group back in the fall.

Vendel figures are clunky and don’t have a lot of fine detail, but they paint quickly and with a little wash and dry brushing, I think they look fine en masse.   As I was saying on the AHPC site, I worked hard to give them some variety in terms of hair colour and the colour of the skins and furs they are wearing, rotating through a palette of five different base colours.  I think it worked fairly well.  I currently have some of these figures on my gaming table for a solo game of Dragon Rampant, where they are scampering through woods and kicking elven arse as Bellicose Foot.   I think Saruman will be very pleased with the money he spent to influence the election of the new President of Dunland, as it will pay dividends.

I am currently working on two personality figures from Heresy Miniatures who will be the leaders of this motley crew, and when they are done I’ll take some shots of the whole Dunland force.  Let Rohan tremble!