Council Fires is one of those small, regional wargaming conventions that keeps out hobby going in eastern Canada.  Each is a labour of love run by a small organizing committee, with a handful of vendors and, for the most part, the same familiar faces.   This event has been staged in various places and venues since I arrived in SW Ontario in the 1980s, but in its current incarnation in Brantford, it was worth the day.   I got up rather early on a Saturday morning for the two hour drive from Barrie after picking up Stephen M.

$15 for a day of gaming goodness seemed like a bargain, especially as the fee included a gift figure from local manufacturers, Crucible Crush (partners with Bob Murch in the very lovely Flint and Feather Range) and RAFM.  I was delighted to receive this RAFM figure from their Air Pirates game, which I am sure I can use. 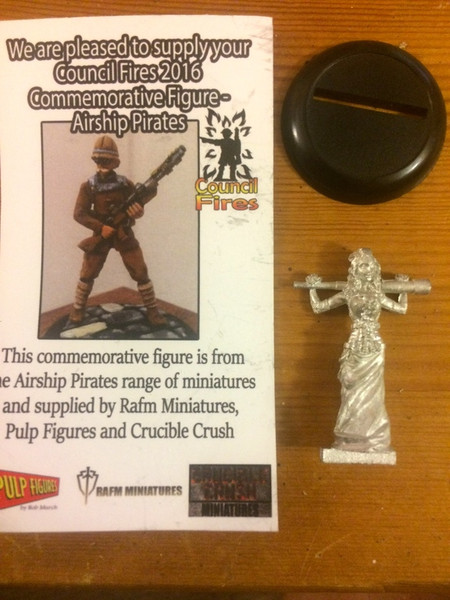 We arrived at 9, just in time to get in on the  game of Frostgrave.  Never played Frostgrave before but was curious. This was the setup that awaited up to six players, each taking a different faction.  The blue tokens indicated a treasure to be picked up, with the best treasure belonging to the frost giant in the centre.   Some lovely scenery with a winter-themed map (by Cigar Box, I think?). 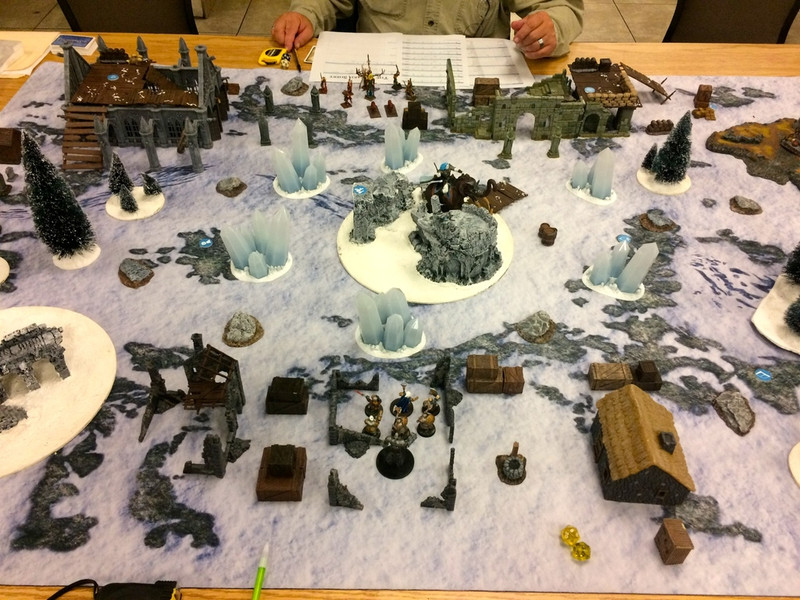 The frost giant.  Since my war band started in the centre of the table, closest to him, and since I had a bunch of stout-hearted dwarves, I decided to take him on.   A magical grenade, well placed on a natural 20, helped take him down. 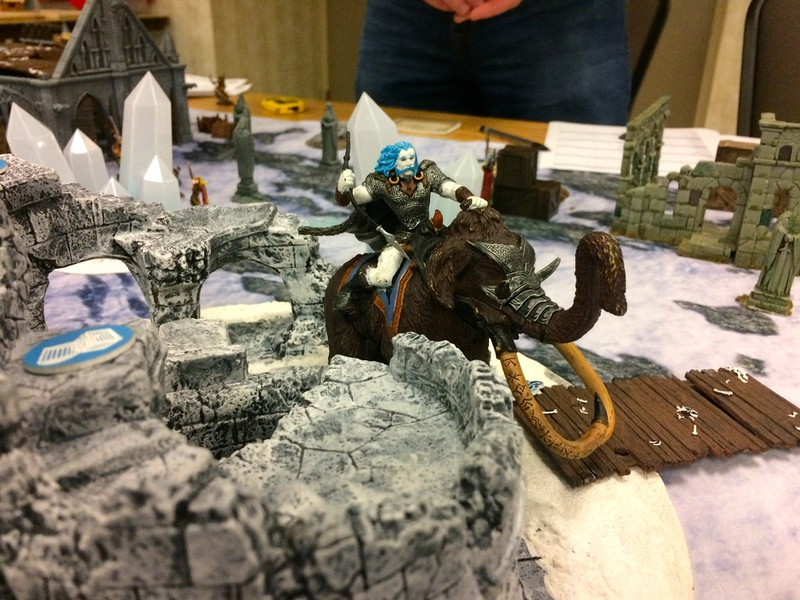 Part of the lovely scenery on the table.  A rival war band consisting of tree spirits, as far as I could tell, are climbing this tower to get the treasure therein. Shortly after this was taken, a third rival war band used a Crumble spell to collapse the walkway and drop one of these figures to a horrible death.  I quite liked the magic system in Frostgrave.  Spells are not automatic, and failure to cast one can take a toll on the wizard’s health.   Each war band has a wizard, who are reasonably adept at casting spells, and an apprentice, who is, well, less adept. 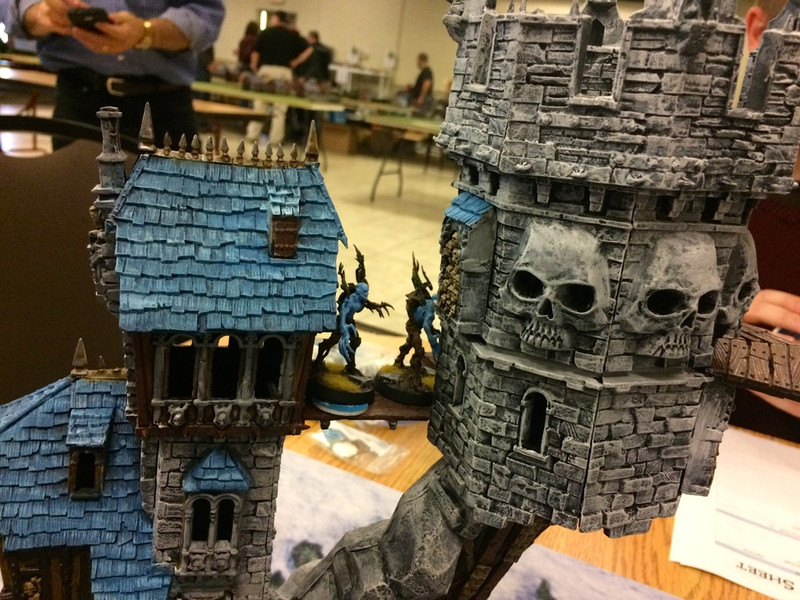 Two more of the rival war bands brought packs of dogs to the fight.   It was kind of an off-leash park for giant killer dogs. 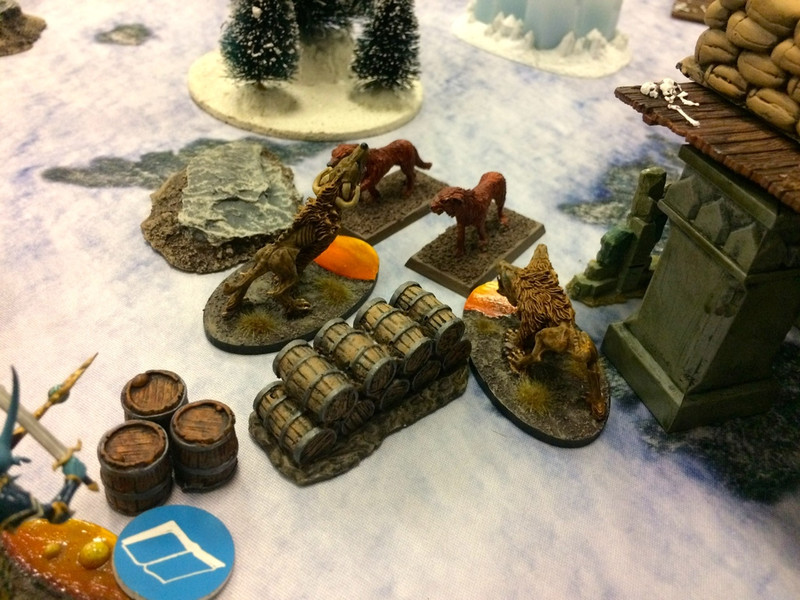 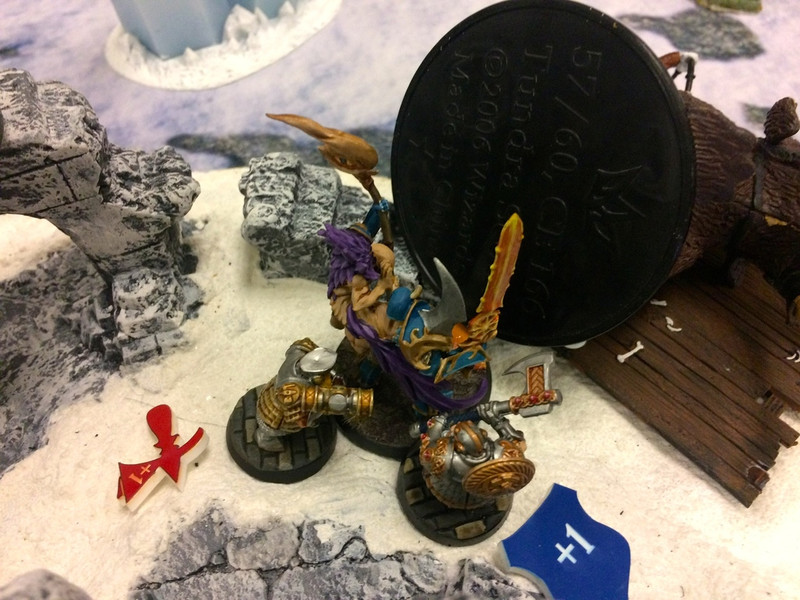 So we killed Bruce’s evil wizard.  However, every time someone grabbed a treasure, there was a chance that a horrible creature would be summoned from the void.  This demon grizzly bear appeared and shambled towards the centre of the table.  One of my dwarves was so intent on grabbing treasure that he got cut off in this ruined tower.  Terrible decision.  He got a big bear hug for his troubles, and another one, and another one, and then he sort of ied.  A horde of other rift creatures closed in on the survivors of my war band, who also being attacked by several other war bands.  My high-risk gambit of going after the frost giant’s treasure did not pay off, but it was jolly good fun while it lasted. 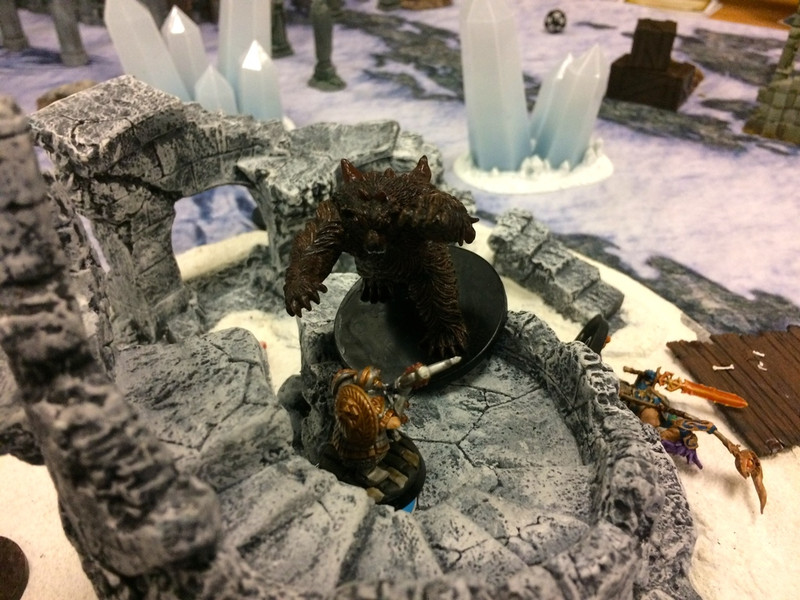 Frostgrave had some very clever ideas going for it.  The activation rules are clever, and the magic system is creative and fun without being overpowering.   Because it uses d20s and uses opposed die rolls for its combat resolution, there ca  be some wild swings of fortune.  Fun if you like that sort of thing, but perhaps a little chaotic for some tastes.

In the afternoon I got involved in an ACW skirmish game by GM Kirk D, using his lovely figures and the Brother Against Brother skirmish rules.  Here’s Kirk’s table, featuring some first rate bespoke buildings. 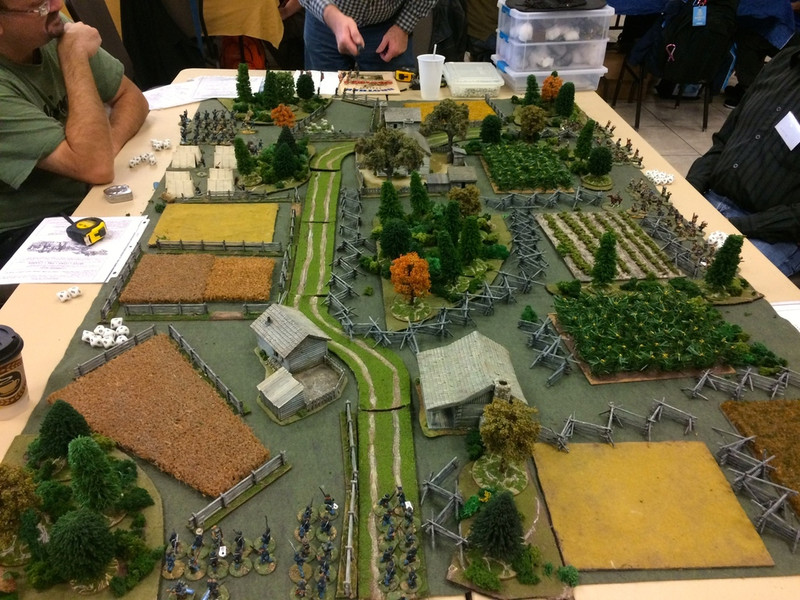 I had a plan of trapping Mike’s infantry on three sides in the centre of the table, but the trap rather got closed on me and my chaps got bushwhacked in three sides.  I didn’t think touch of the rules, I confess.  If I wanted to play an ACW skirmish game, I would want to play Sharpe Practice 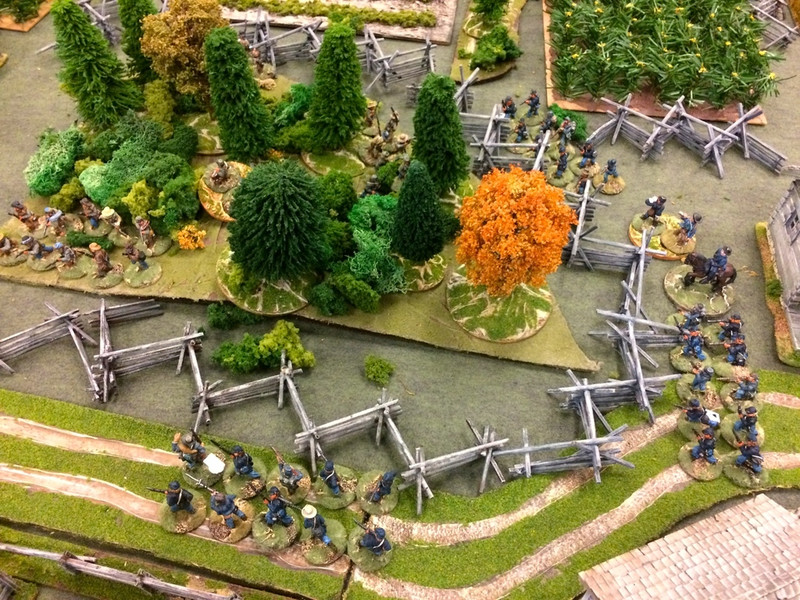 I noticed this interesting Mexican-American War game, laid out on a sheet of disruptive pattern camouflage fabric.  Rather hard to see the figures, one might think. 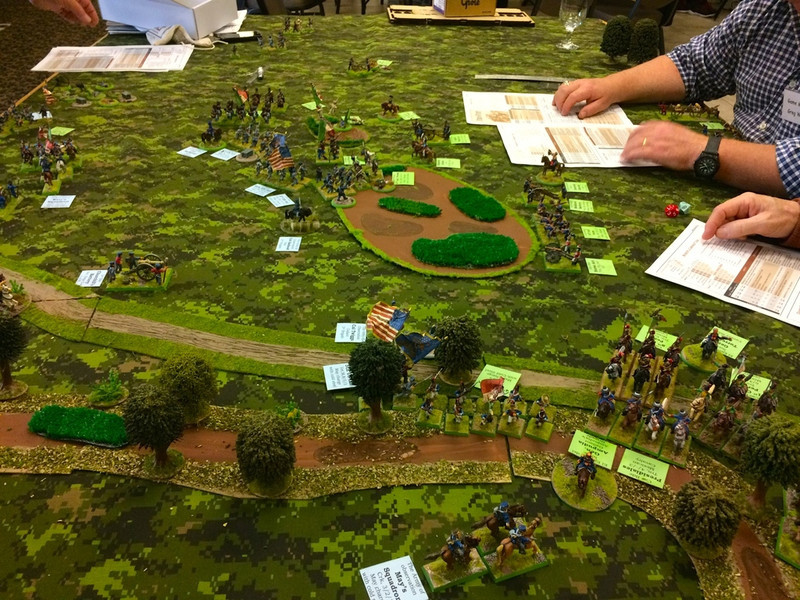 This War of 1812 game was one of the nicest at the show, I thought. 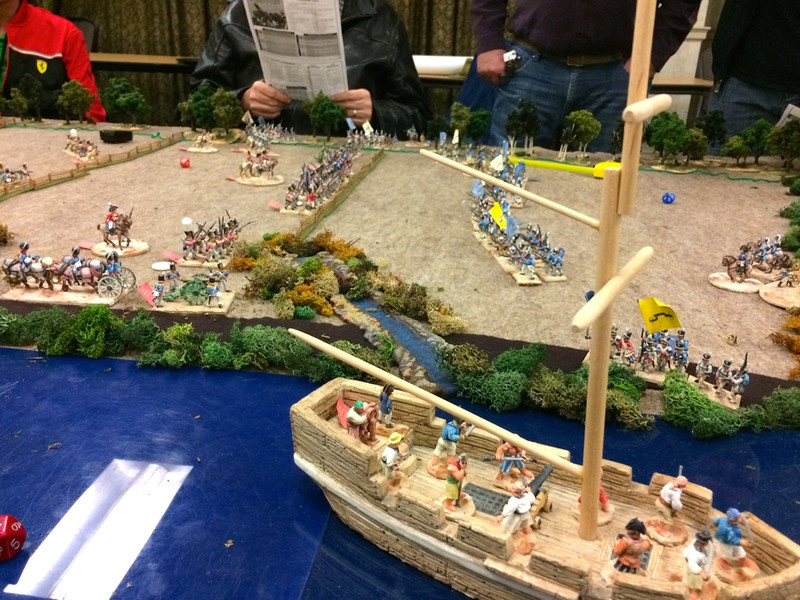 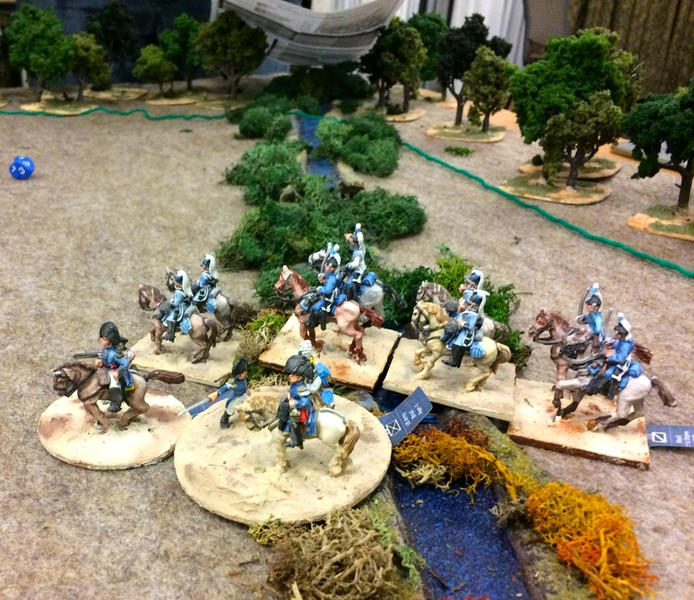 In the evening, Stephen, Bruce and myself, as representatives of the Barrie Old Guys Gamers (BOGG), pooled our resources to put on this Dragon Rampant game for six persons. The big flat thing was a lost temple that could possibly bestow advantages to magic users.  Whoever controlled the  village in the centre would win.  We had six factions and four players, so Bruce and I got to run a faction each. 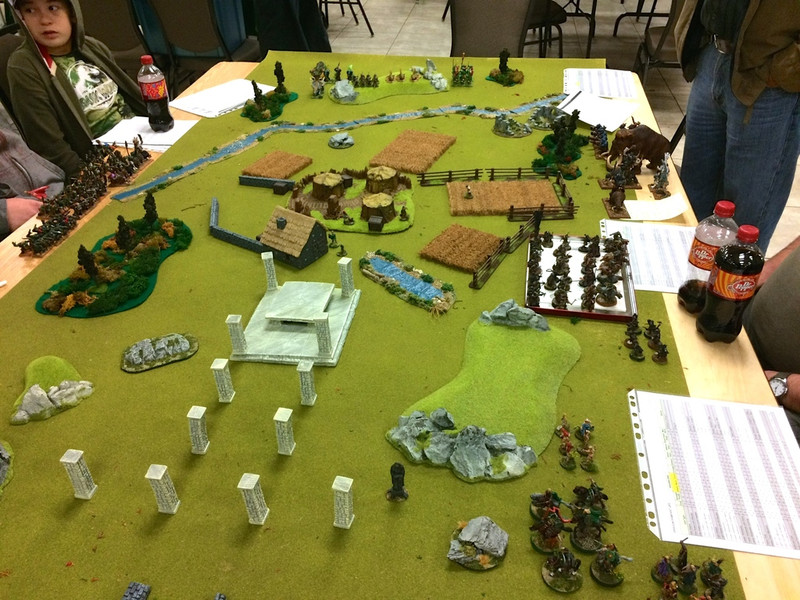 Andrew, our youngest player, drives his armoured triceratops packed with lizard warriors into Bruce’s Orks on Pigs, in one of the many kinds of fights that makes Dragon Rampant so glorious.  Most of the figures on the table, including these, were old Games Workshop Warhammer Fantasy figures. 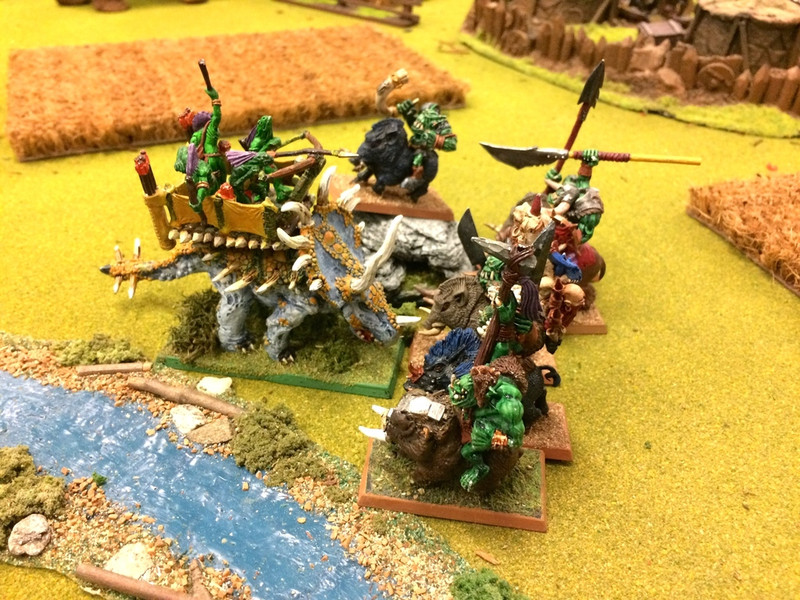 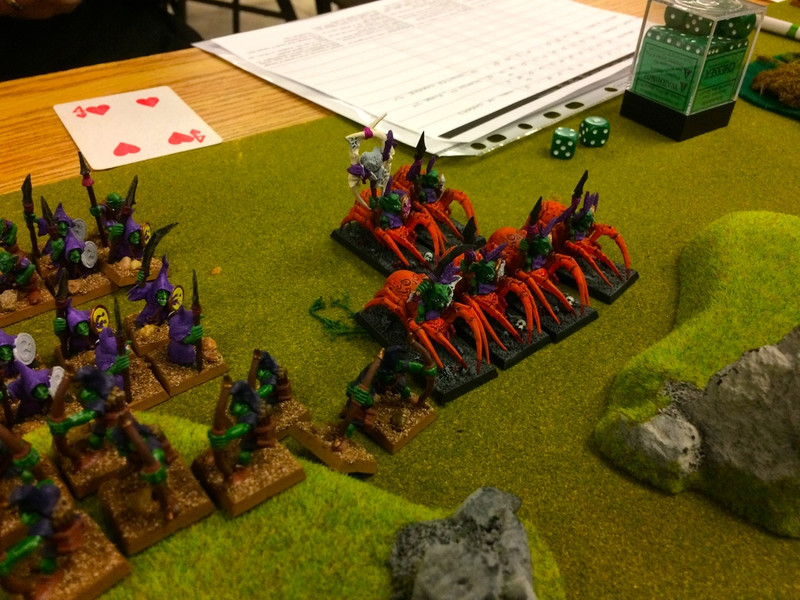 Human cavalry in elvish service engage the spiders and drive them off.  Unfortunately, by this point the goblin wizard got onto the temple and blew the horsemen to smithereens. 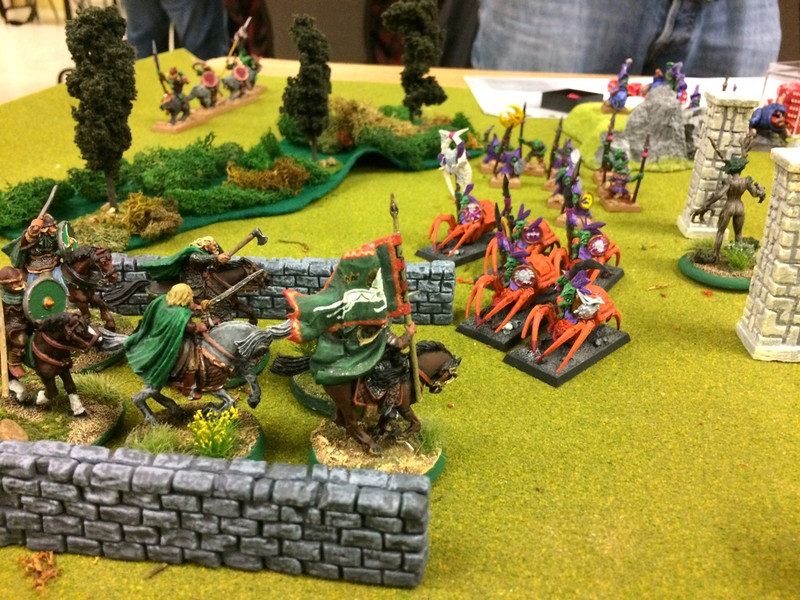 There was more chaos raging elsewhere on the table.  The Orc army I brought was wiped out by, well, a rival Orc army with help from some nearby rampaging mastodons.  It all happened so fast, I didn’t get photos.  Sorry, but Dragon Rampant can be a bit like that.  Perhaps it was overambitious to have six players, each out for their own interests, but for the last game of the day, it was agreeably silly, and I think we Barrie Old Gamer Guys put on a good show.

I mentioned the presence of Six Squared Studios at Council Fires.  I like these guys for their creativity.  Besides doing some nice laser-cut bases, they are kind of the Canadian Litko, as they offered an interesting range of gaming tokens.  I picked these up quite cheaply as patrol markers for Chain of Command.  Pity the British markers are not coloured, but I can live with that. 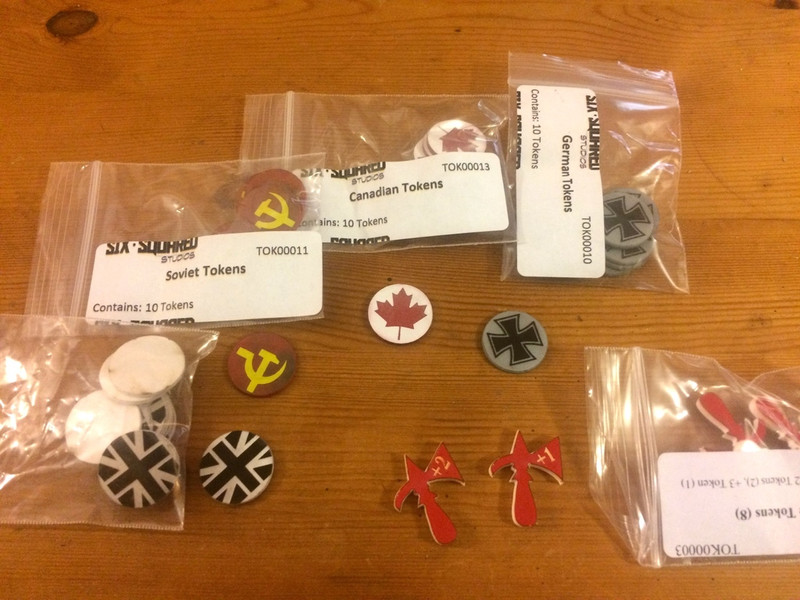 From their line of resin scenics in various scales, I picked up these resin haystacks and a horse watering trough for my Rohan village. 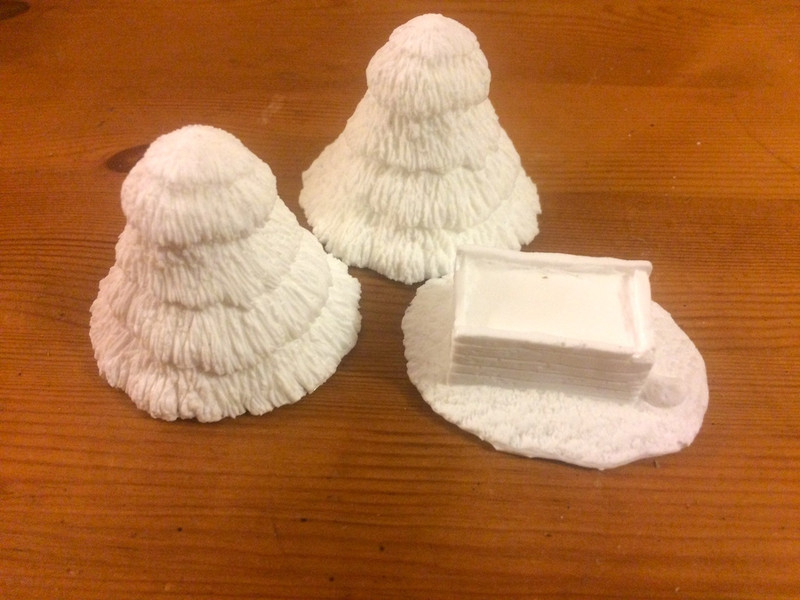 I did get some other items if loot, which can wait for another post.   I hope your gaming weekend was as much fine as mine was.

Blessings to your die rolls!  MP