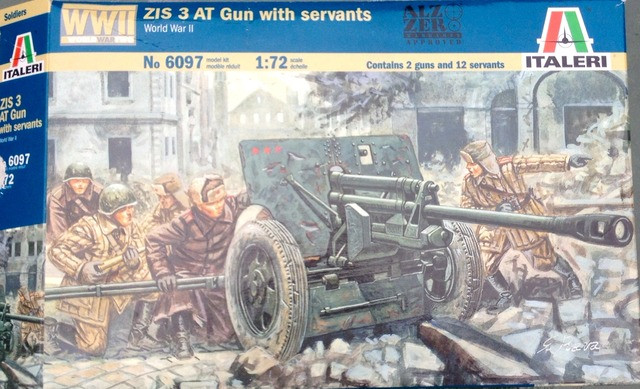 A year ago I declared the six weeks of Easter to be the time of my Resurrected Armies project and one of those goals was to finish off and fix up my 20mm Soviets.   While I didn’t formally declare that this Easter would be another Resurrected Armies period, that goal was still in my mind, and so I dug out this Italieri kit that I had started on last spring.   The kit is a hard(ish) plastic, a little softer than, say, the plastic figures from Warlord, but quite easy to work with.  I am by no means an expert on cannon, but the AT guns appeared to be well cast and fit together quite easily.   I rather liked the box cover which said that 12 “Servants” are included.  One of those harmless translation errors that made me think of Downtown Abbey with loud explosions. 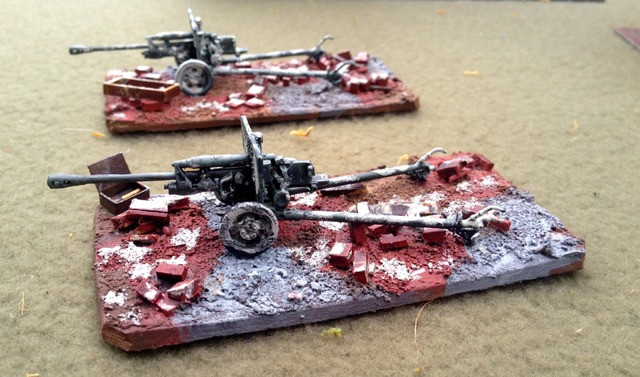 Because the figures are dressed in overcoats, fur hats, and quilted tunics, the gun crews give off a winter vibe, and made me think of the last terrible months in Berlin or other Fortress Cities like Konigsberg, so I stole an idea from Sidney Roundwood and designed these bases for them, something I’d tried last year for some Soviet tank destroyers.  For the bricks I chopped up some of the wooden sprues from a 4Ground kit, and while a little on the large side, they worked alright, I think. 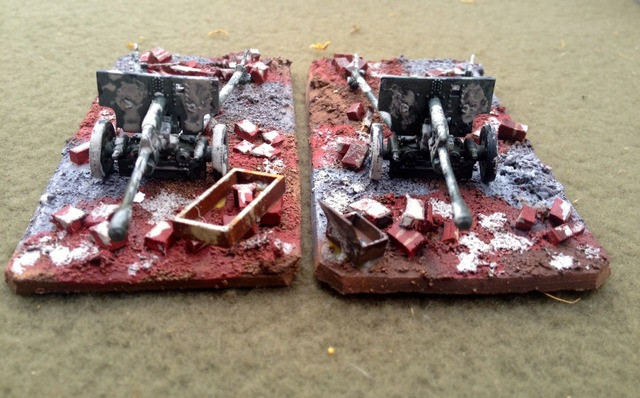 I’m not sure if this project qualifies as another pigment disaster, but I wanted to give the impression that the guns had been hauled through and coated in concrete dust, in a manner reminiscent of those pictures of Manhattan after the Twin Towers collapsed, when everything and everyone was coated in grey dust.   I used a slate grey pigment, but when it dried it looked more like snow than dust, so I had to scrape some off the bricks on the bases with y fingernail.   When I tried scraping it off the cannons, the paint started coming off, so I abandoned that plan.

This last shot is to my mind what AT guns would have been most useful for in Berlin - not fighting off the few remaining German tanks so much as winkling defenders out of buildings.  I believe that was a favourite use of 6pdr AT guns by Commonwealth and British troops in Ortona and Caen and other FIBUA situations.

Blessings to your brushes!  MP