Almost Wobbled On The Cobbles: Painting the Italieri Stone Bridge

I am happy to say that I am writing this on my Macbook, which I got back from the nice Apple Genius Bar folks yesterday.  I you read my last post here, you will recall that I was bracing for a $300 repair bill, but the good news is that only one part, an I/O Board, needed to be replaced, and so the total bill was $70 and it appears to work just fine.   Happy days.   My happiness level got a further boost when I was about to drive my Kia Soul to the garage to check out why the dreaded Check Engine Light (which should have the shape of a money sign ($) rather than a little engine) had come on on Tuesday.  After a day of sitting in the driveway, the light did not come on and the service guy told me it was probably just a bad seal with the gas cap.   Happy days indeed.

One of my painting projects while watching Game of Thrones with Mdme Padre over the last few weeks was to build and paint this Italieri kit, since I needed a stone bridge that would work for 20 and 28mm scales, and this looked like a sturdy and useful sort of kit for everything from Europe to the ACW (it does have an Antietam / Burnside bridge kind of vibe to it).   It also had the merit of being incredibly easy to put together.   Italieri has really thought out what gamers need in plastic kits.  Simply and strong as a rock when put together.

But how to paint the blasted thing?   After an undercoat of flat back spray from the DIY store, I had to decide, should I just paint it a simple slate grey with some highlighting, or perhaps a brownish sandstone sort of look?   All the while this image from the box art kept staring at me, as if to say, come on, Mike, you know you want to paint it like this.   Cobblestones are fun, you can do it.   I almost got all wobbly and said no, but then I thought, I can do this on the couch with one eye on the TV, just choose half a dozen or so colours and do one colour at a time.

Never being one to do something simply when it could be incredibly difficult, I decided I would not back down.  I would not be a cobble wobbler.

There were many, many times when I almost lost my nerve and thought that the bridge was looking like shite.   It was not terribly difficult to paint within the bricks and leave most of the black undercoat showing as outlines, but for this job I was using cheap craft acrylic paints (mostly Folk Art) and the paint didn’t always go on cleanly.  Also, with so much black showing, it just looked odd, but as I persevered and applied more and more colours, with the grey shades dominant and the darker colours as infrequent highlights, it started to come together.   Suddenly, I had a bridge that looked almost as good as the box art!  I’m pretty sure I missed half of GoT season one, something about winter coming, heads on spikes, dwarves with naked women, dragons with naked women, etc.  I’ll have to watch it again, I suppose.

Now that the bridge is done I am debating whether to put some sort of wash on it.   I was thinking of Army Painter’s Soft Tone, but my concern is that since that product is basically a light brown colour, similar to GW’s sepia wash, I would lose the various shades of light fray, particularly along the top and bottom of the span, and the whole thing would look kind of gross.   I’m kind of thinking I might just spray the whole thing with Dullcote and move on, but I would welcome your suggestions as to what the finishing touches might be. 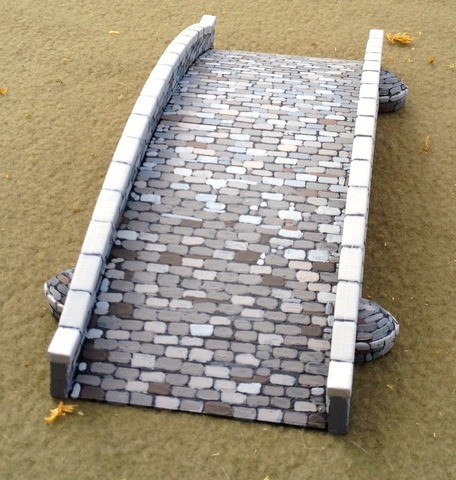 The all important test of the bridge, using a river.  Hey, it works! 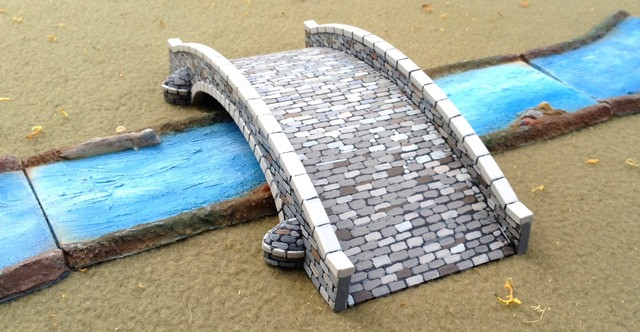 Why did the Ottiomans cross the bridge?  My newly finished Spahi command group test the bridge by riding across it.   That test was successful as well.  Hooray! 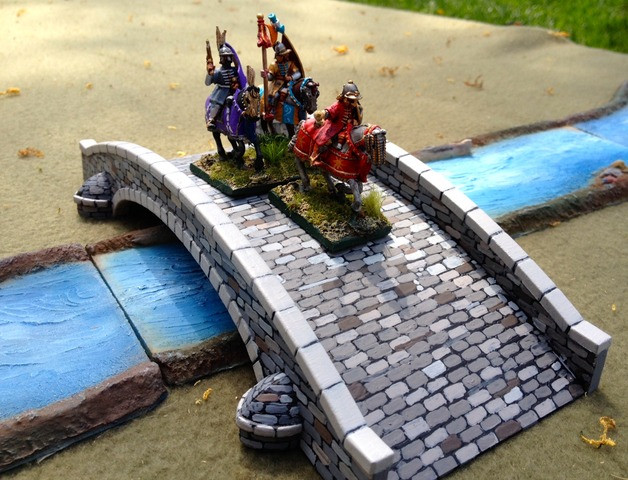