With Plumy On The Fronter, Or, Curry in a Hurry and With the Guides to Fartibad

I haven’t done much gaming lately.   Evenings have been spent working through Season 1 of Game of Thrones with Mdme Padre (sad to say, we’re both hooked) while working on some various flocking and basing projects.  Slowly getting my hobby energy back now that the winter term is over and all I have to do now is research.

Last Saturday night however was an awesome evening of gaming and jolly japes.  My good friend James and the lovely Mrs. Manto decided to combine an imminent birthday with the J&M Miniatures annual staff party, which saw James, his business partner Martin, myself and several other ne’er do wells of the Hot Lead fraternity having a mess dinner of curry and delicious Indian food in the midst of the J&M stock room.   Good food, good company, wine and beer surrounded by shelves full of gaming stock and a war-game waiting in the basement … well, it was all a somewhat nerdy version of Valhalla, really.

The occasion for our game is described by James as only he can tell it here.  The game was played using James’ terrific collection of 28mm NW Frontier figures and some of his home-made scenery.

Here is part of the domain of the nefarious bandit the Faqir of Fartibad - or is it Cirith Ungol in front of Mount Doom?   Scratch-built scenery by James.    This was one wing of the Faqir’s Pathans’ defensive works, that I was tasked to capture with a scratch Indian Army brigade. 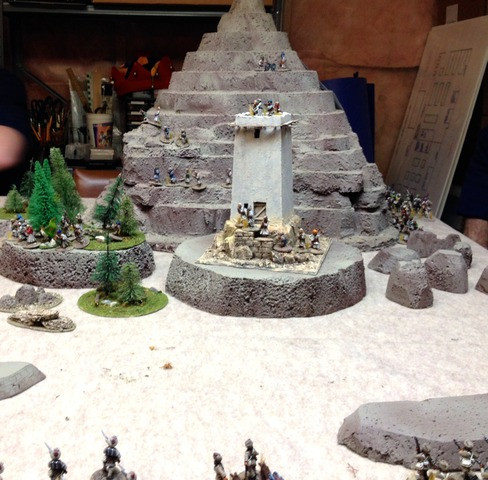 While the Gordon Highlanders advance on the left, supporting some Gurkhas who are chasing over the rocks top left, my mounted Guides in the centre seize an opportunity and go after some Pathan riflemen as they try to move into some rough ground.   Half of their number were still in the open when the Guides hit them, and the outcome was quite satisfactory.

My Madras Pioneers advance in the centre, while on the right I threw all my Sikhs into a charge against another lot of beastly Pathans lurking in the rocks.  Both sides locked in an ongoing melee. 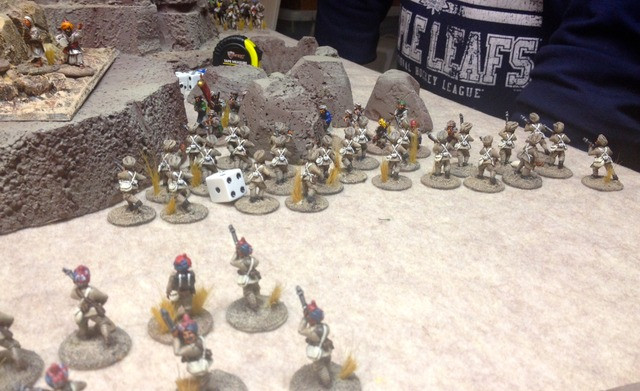 One company of the Madras Pioneers press forward against tribesmen on high ground, with much ineffectual sniping on both sides.

Pathan cavalry sorties on the British right flank and joined the melee against the Sikhs, who hold like rocks.  I threw my reserve of Madras Pioneers in and after a lengthy scrum the Pathans melted away.   On my left, the British sahibs were generally doing well, the Gurkhas and Blandingshires having driven the Faqir’s men out of their strongholds and were looting his stuff.  We settled down on our side for some chai. 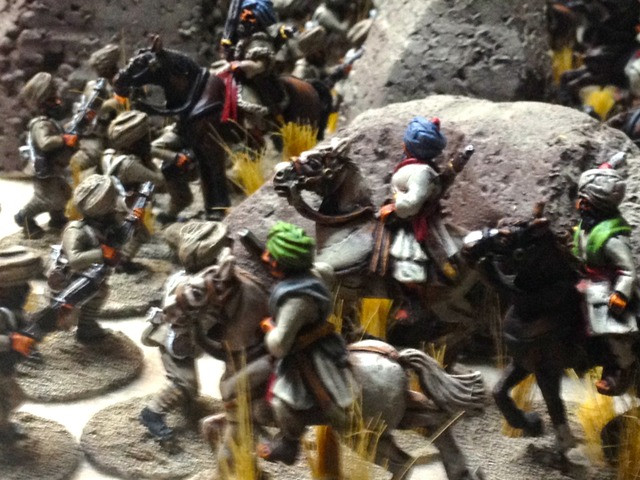 Again, the story is told much more entertainingly here.  I just wanted to post these pictures to give you a sense of James’ collection.   We had a running discussion that night about what setting shows Colonial wargaming to its best advantage.   One could make a good case for the Sudan, with its riverboats, colourful Mahdists and Fuzzy-Wuzzy, Egyptians in cool fezzes and the variety of British uniforms. but it would be very hard to beat the NW Frontier for its legendary and epic nature, scenery (amazing if done well) and the rugged Pathans, stalwart Sikhs, elephants, colourful turbans and British pluck, with the odd chance of a dastardly Czarist agent or three thrown in.

We used Black Powder for this game.   It’s my second time playing BP, and both times I was totally reliant on someone else telling me what to do, but the game seemed to move along and the results generally made sense, so BP seems OK in my quite uneducated opinion.