It's been a quiet weekend at the Mad Padre's painting chapel at the edge of the frozen prairie. Work continued on my 1 to 1 scale terrain painting project. It will be a while yet before I get a posting message from the military, allowing me to put my house on the market, so we are putting the time to good use getting it ready for showing. A colleague who came by this weekend pronounced the house as "cottagey" (not really sure what that means) and liked the original woodwork, so I am hopeful that we will get the right buyer who also likes "cottagey" homes. In other news I completed a unit of 17 Soviet WW2 Cossacks in 20mm on Sunday, continuing the theme of February as Russian Month, and got the pictures off to Curt for the Analogue Painting Challenge. If you're not tracking the Challenge, I'll show them here in a few days. On the painting bench as of last night are a unit of 28mm SYW Prussian hussars, who have already been told that they are being painted as Russians. I've told them they'll get the same schnapps ration, only in vodka, so they're good with that.

Speaking of the SYW leads me to this photo. 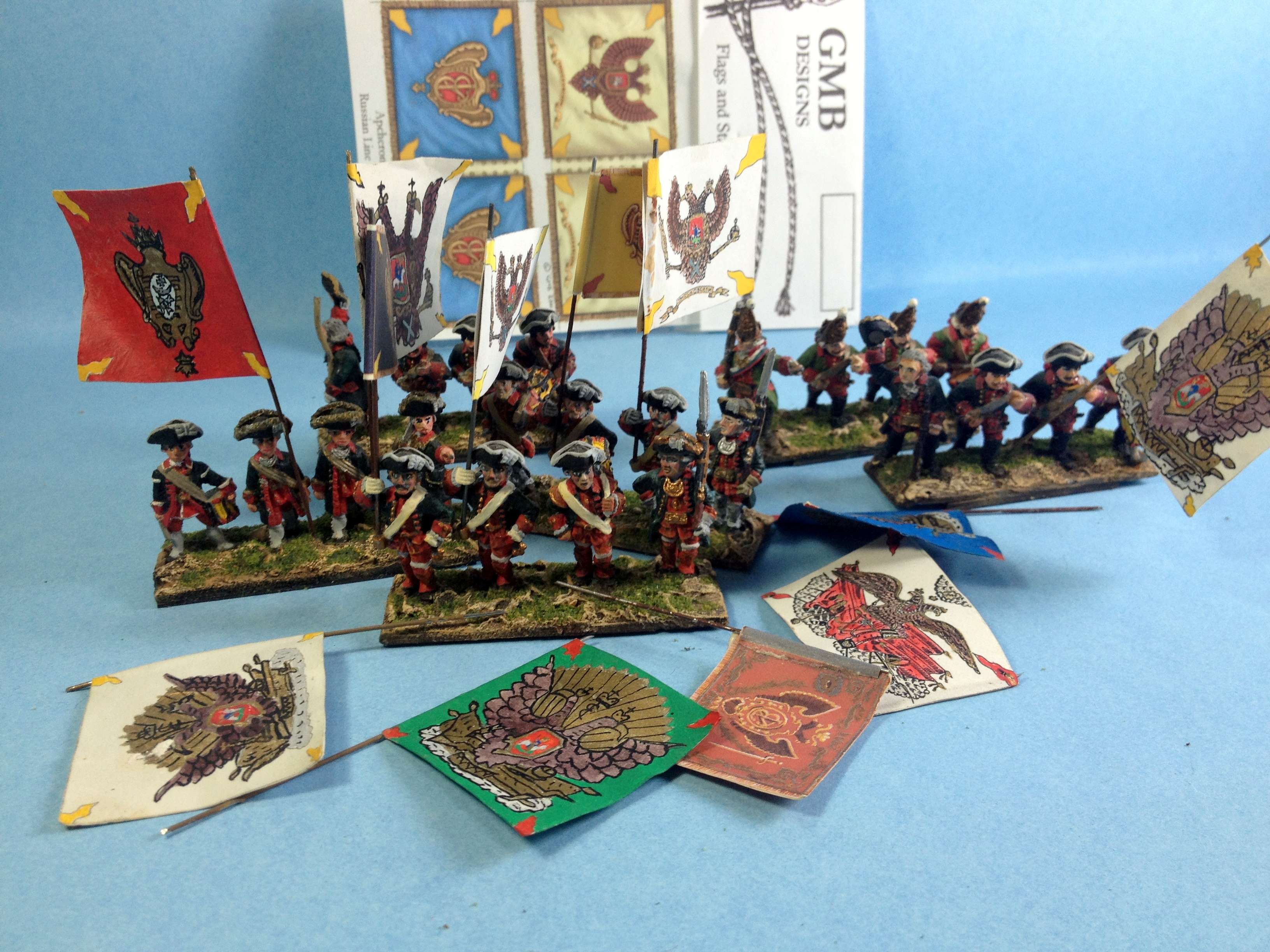 These chaps came out of a box a few weeks ago, in which they have languished and been bashed around for over a decade and four moves. They are the command stands from a Russian Seven Years War army that I put together in the 1990s, as I believe I've mentioned here before.

They are all Front Rank figures, with the exception of the stand on the left with the red flag, who I think are Falcon? The flags are all hand painted, but as you can see at the back of the photo there is a set of flags for the fabled Apcheronski Regiment which I ordered from GMB out of curiousity, and which has also languished in a box for some time. The infantry to go with these fine fellows is in a box, I visited them last recently and they are all doing fine, but restive and eager to revisit their faded glory.

Now I am, as those of you who visit my other blog (the God blog)a preacher, and right now, like preachers everywhere at the start of Lent, I am thinking ahead to Easter, and that has lead me to think of what I am going to call The Resurrected Armies Project. 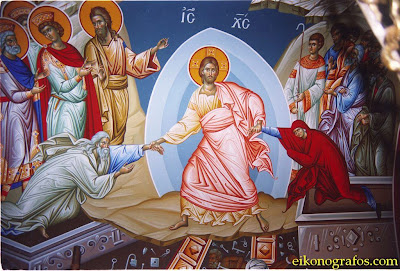 (Icon of Christ raising the dead. Raising the lead rhymes, and is hopefully not too impious.)

So here's the plan. Sunday, March 31 is Easter Sunday. By then the Analogue Hobbies Painting Challenge will be over and my focus ("my focus" is a bit of an oxymoron, but bear with me) will no longer be on cranking out new figures. My main painting focus in April, during the first four weeks of the season of Easter, will be on retrieving my neglected and half forgotten armies, fixing them up as needs be (some major flag work on the guys in this picture, for example), painting whatever new figures for them I have stashed away over the years, showing them to you in their resurrected glory, and finally, and most importantly, getting them on the gaming table.

The armies I am thinking of for this project are:

2) Late Renaissance-ish Ottoman army (28mm) - this army was previewed a few posts back when I showed off the mysterious love slaves that folks helped identify as possibly Essex Cossacks. There are a lot of figures here that need remedial painting if not stripping and redoing. Also there are two cannon and crew to paint and finish, as well as a mouth watering unit of The Assault Group Spahis of the Porte to paint. Once done, they'll take on the Russians in a test fight of the Maurice rules

3) Soviet army (20mm) - a lot of this is old old stuff, plastic ESCI infantry and badly painted tanks in the wrong colour, so repainting and rebasing will be required. There are some FAA Black Sea sailors to be found and repainted, and if I can unite these resurrected Ivans with the ones I'm painting for February Is Russian Month, then I can do Battlegroup Kursk in 20mm while I work on building up a 15mm Red Horde

4) Medievals (25mm) - my first love. These figures haven't seen the light of years for 20 years. They need some love, and there are some new unlainted. figures in a box that I need to I visit, a unit of half painted pavisier spearmen, etc. James Manto's Blood and Chivalry rules will be just the thing for these dusty figures.

This may be an overly ambitious project for one month, and if necessary I'll carry it into May, since there are seven weeks of Easter this year. If I can get even two armies back on their feet and in play, I'll call it a victory. So, gentle reader, can I entice you into this project? Do you have a mothballed army that you feel guilty about neglecting, and would like to resurrect to new life, glory, and great battlefield victories? You are welcome to join me in The Resurrected Armies Project.