Board Games Night: Paths of Glory

Two Thursdays in a row have found me at the local board games club playing Ted Raicer's Paths of Glory, published in 1999 by GMT games. I'm hooked, 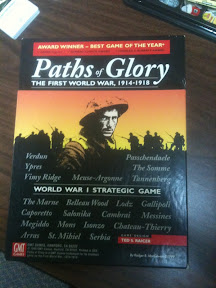 The last time I posted here about a boardgame, Trajan, I said it was a clever game but not an informative simulation. PoG is both.

So much to like about this game. The card driven sequence of play not only drives strategic events but also determines operational possibilities and allows players a limited palette of choices each season or turn of play.

As the Central Powers player in the first game I hammered my mate Tyler on the Western Front and while we bled each other dry, my focus West meant abandoning opportunities in the East. In our rematch, as the Allies I strengthened the line in the West, then ignored it and flooded the zone in the East with the Russians. That diverted most of Austria-Hungary's forces and several precious German armies to stopping me and allowed me a narrow win in a shortened scenario ending in 1916.

Other mechanisms, including combat, operational movement, supply, strategic redeployment and replacements are clean, simple and workable.

I would be happy to play this game again, maybe taking a whole day to play 1914-18. I might even buy a copy if I can find one somewhere. A great game and a great simulation.


Posted using BlogPress from my iPhone
Posted by Mad Padre at 9:51 AM