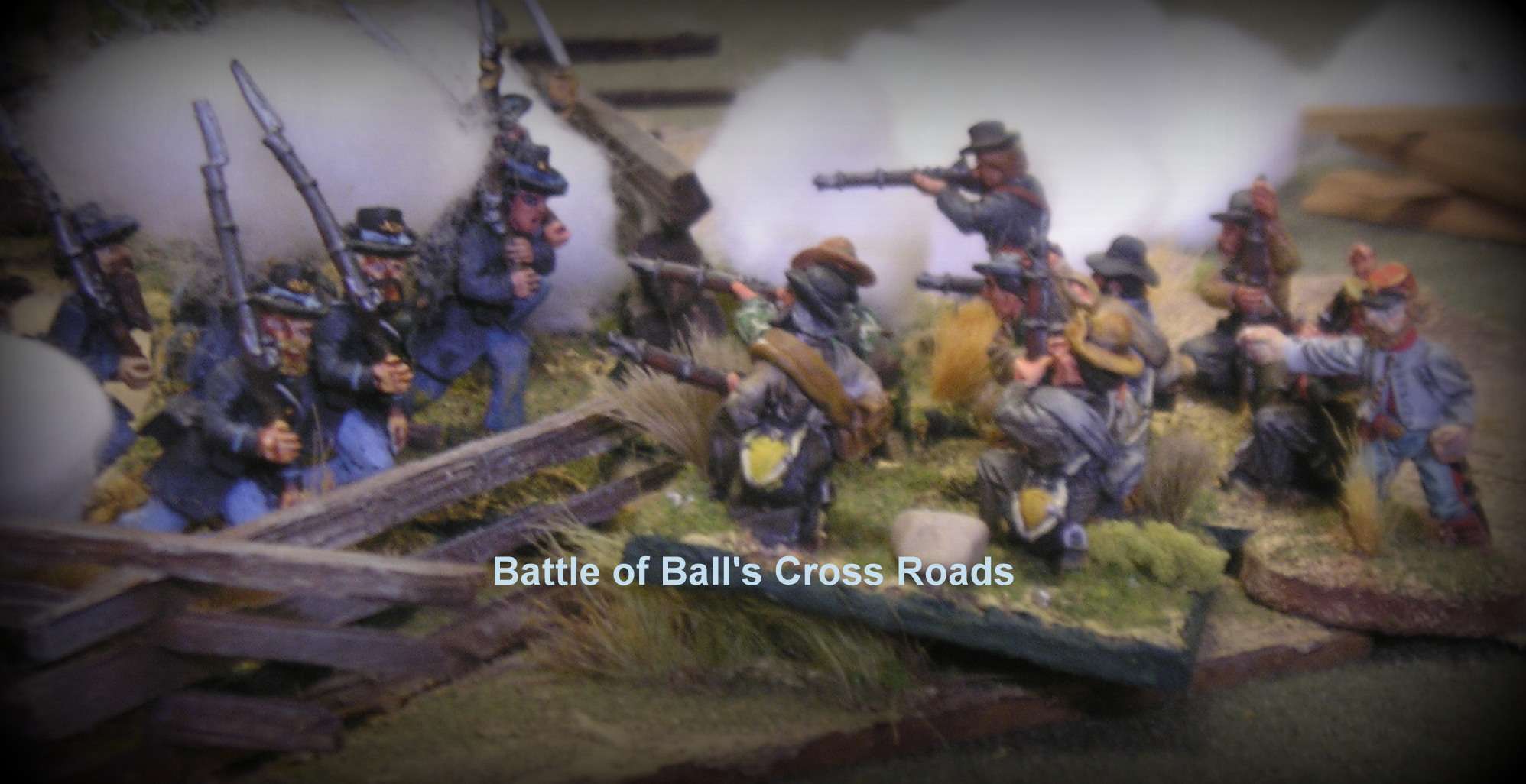 Had some friends over last night to try a smallish American Civil War game using the Terrible Sharp Sword (an ACW variant of their Sharp Practice black powder rules by Too Fat Lardies. For the scenario we used "Ball's Cross Roads" from Chris Stoesen's TSS scenario set, The Coming Storm. In this scenario, D Coy of the 23rd New Yok Volunteers are near Falls Church, Virginia, and has been tasked to skirmish forward and identify rebel positions. 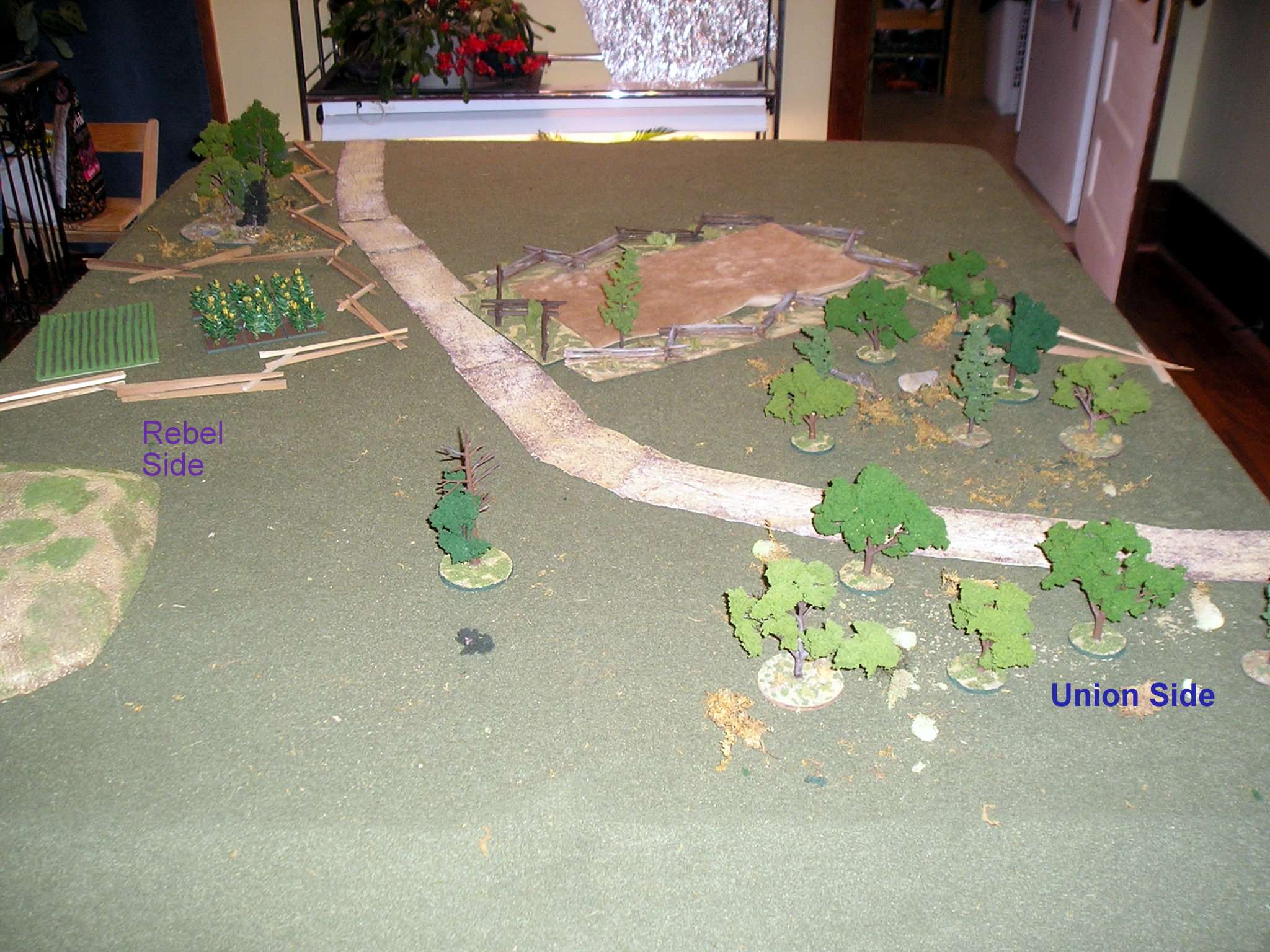 The table was quite simple, a road passing through woods, crops and split rail fences. Such a lot of rail fences. I had to improvise and clearly need to make some more.' 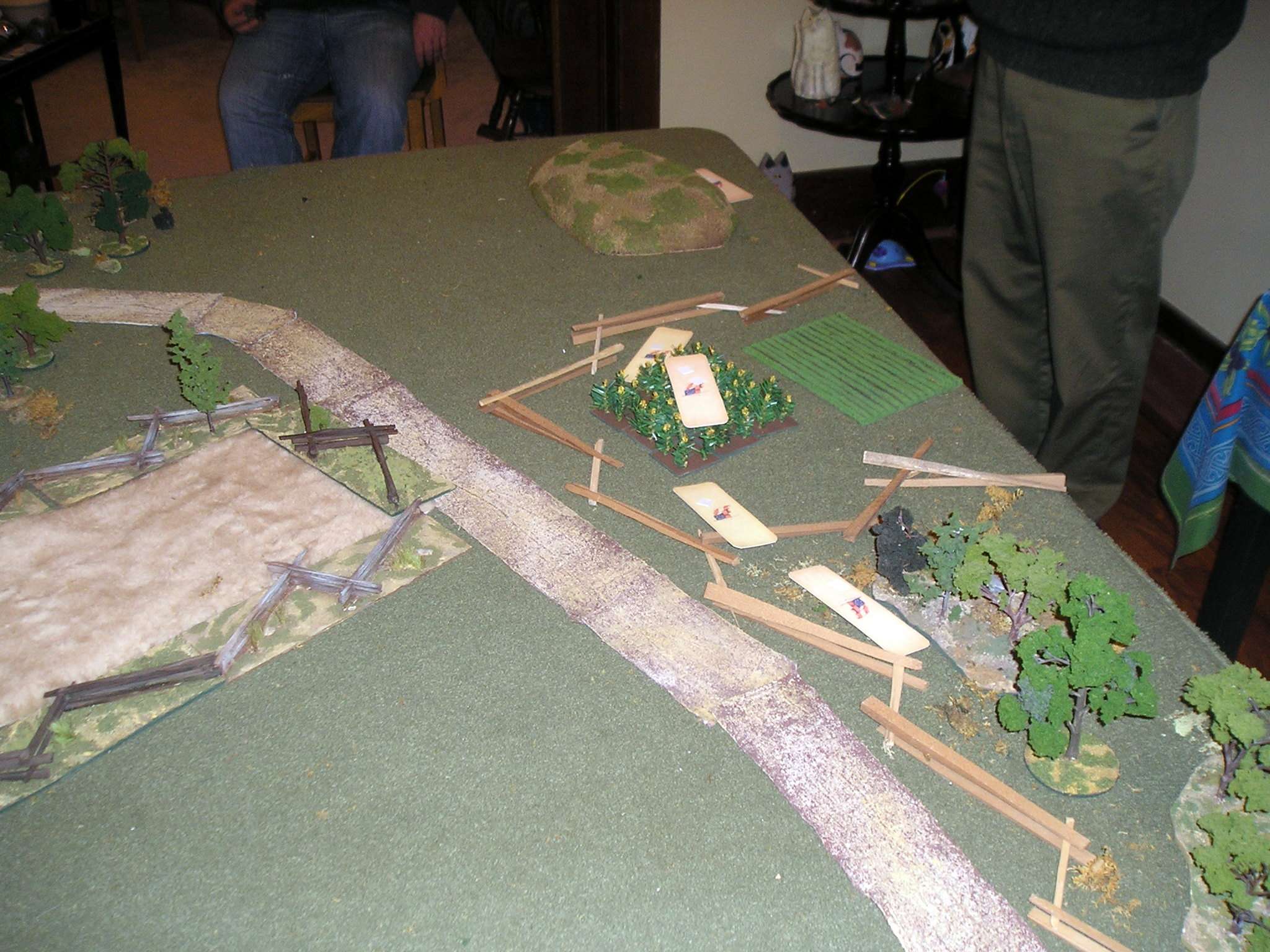 Gene, the CS player, has placed his starting force under blinds. He has four groups of eight men and two Big Men as leaders. Wisely concentrating along the fences by the cornfield in the centre, he also places a group on the hill on his right with a sergeant, keeping his other leader, Lt. Saunders, in the centre. 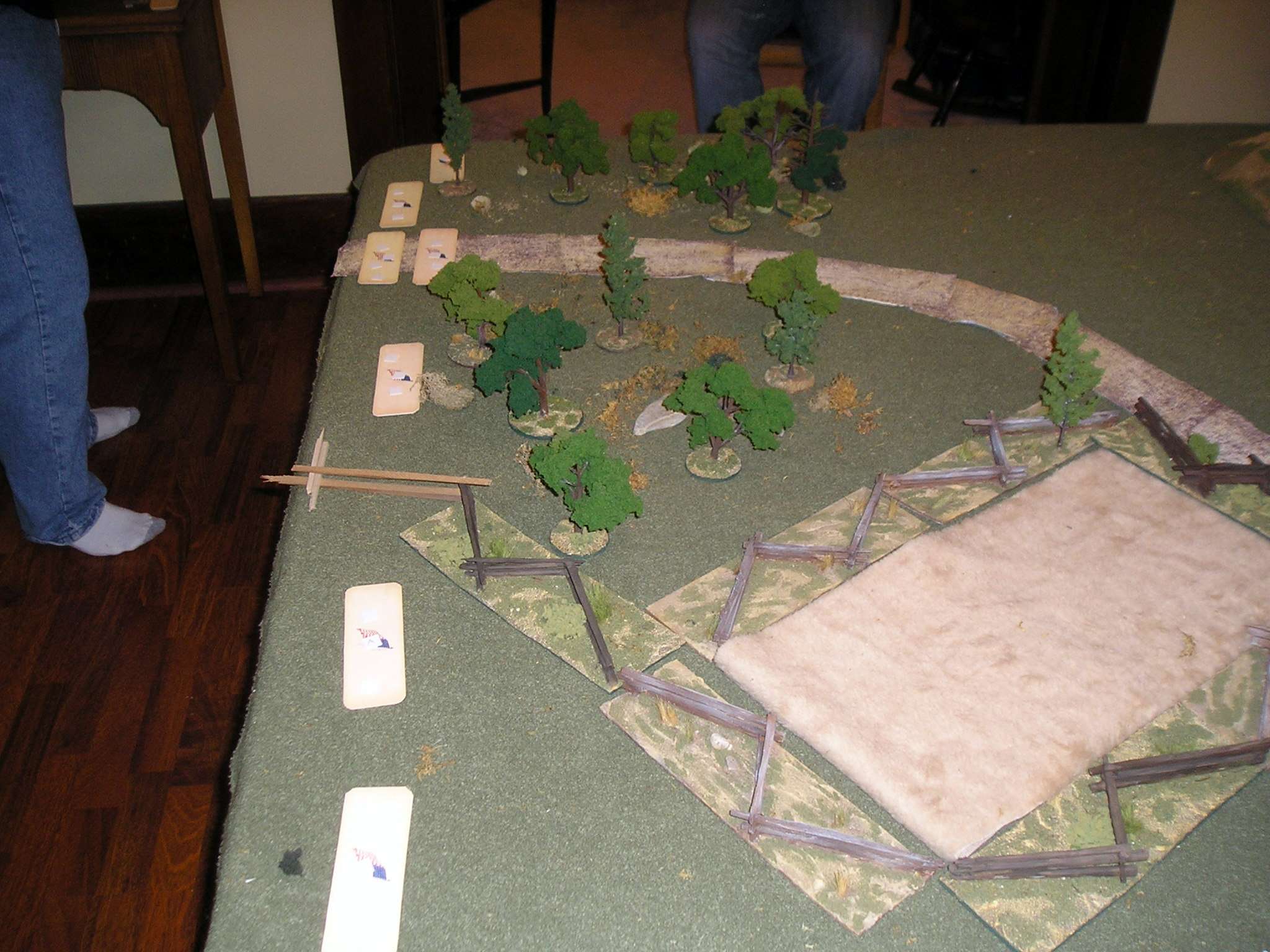 Ryan sends his US forces forward. He has nine groups of eight men each, divided amongst four Big Men and under the command of Capt. Luzerne Todd. Some of his blinds dsignate two groups each, and three are dummies to feint the rebs. 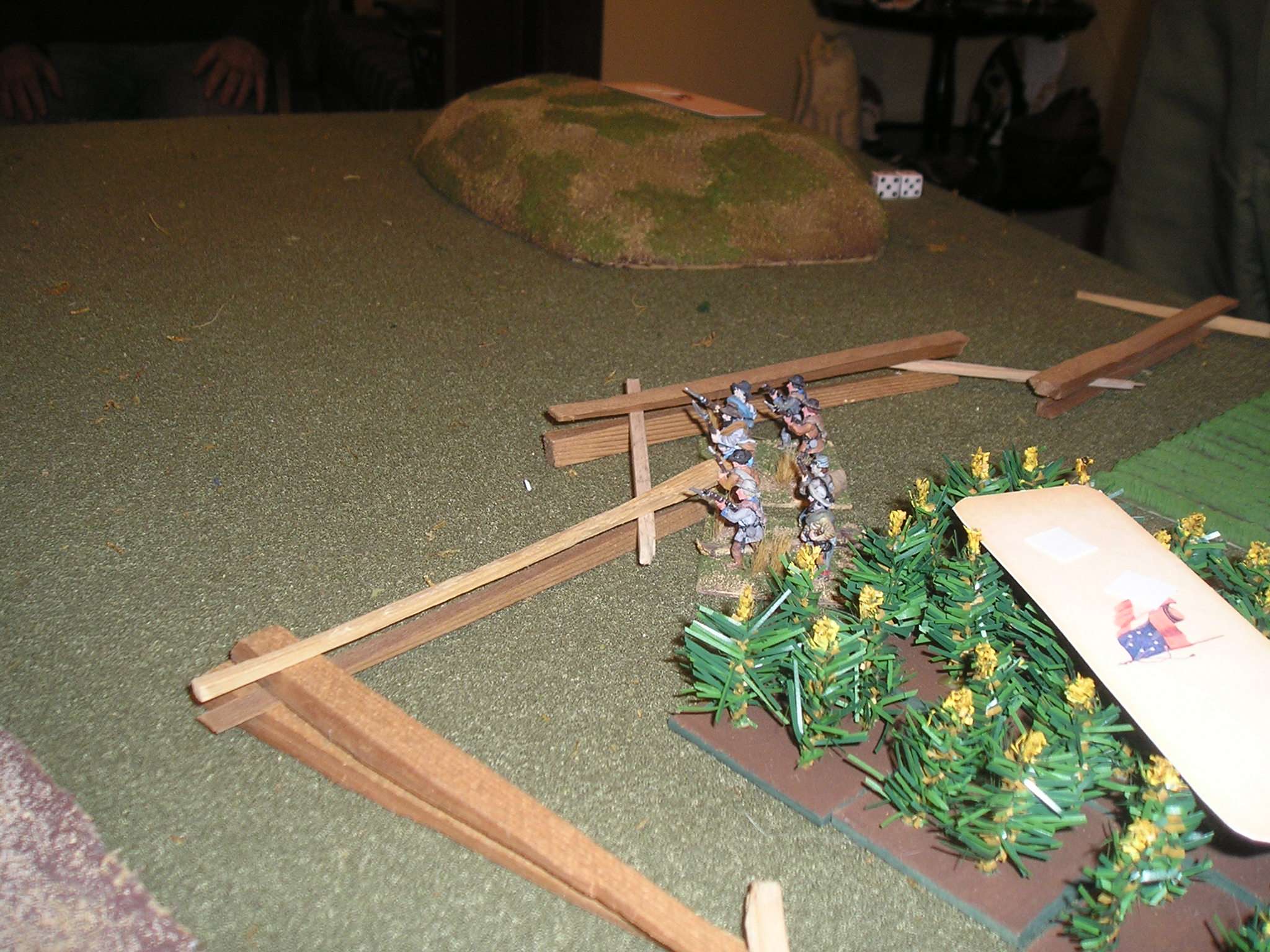 The Yanks spot a blind first,and see one of Gene's groups behind the fencerail. 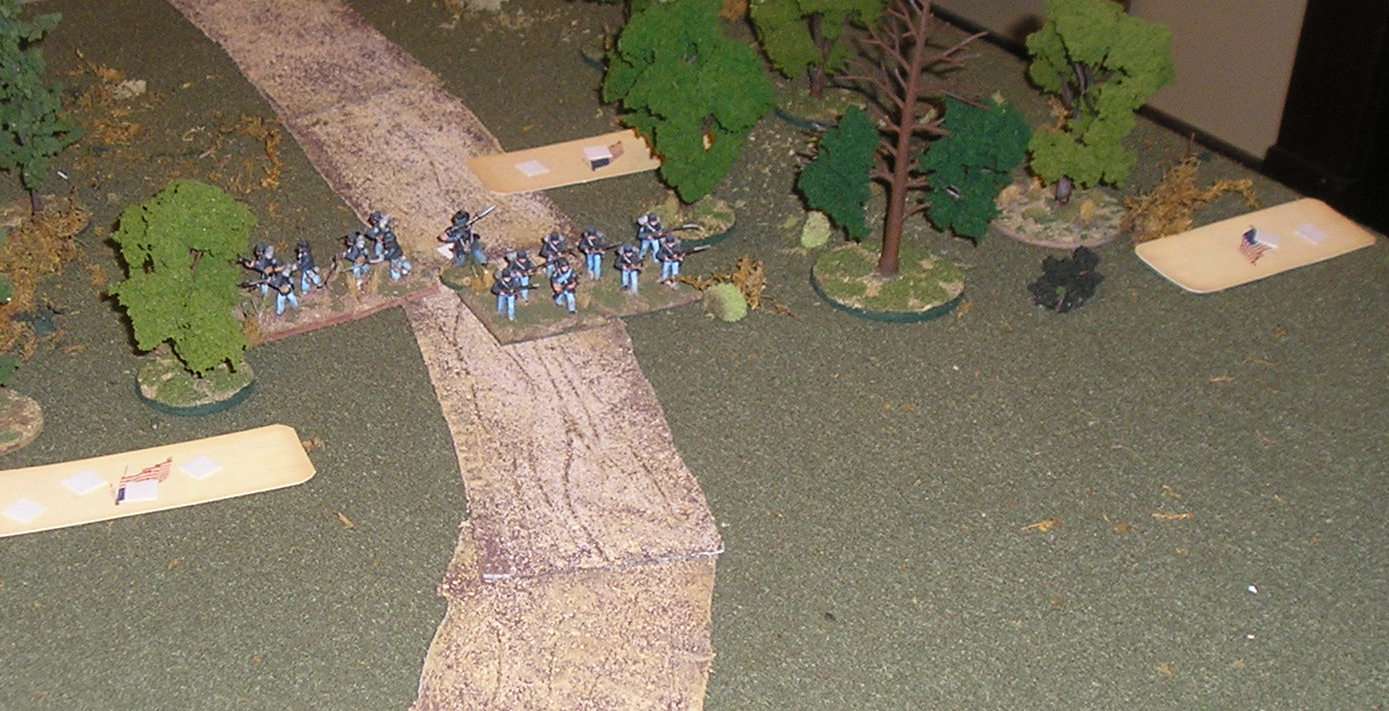 And Gene spots two US groups under Sgt. Sherwood advancing down the road towards him. Gene now has a dilemma. Does he open fire now? If he fires, it will alert the rest of the rebs back in camp, allowing the reinforcement card to be put in the deck. But if he fires his blinds now, he reveals himself and squanders his first volley bonus at long range. Gene decides to wait, a nervy decision.

As Ryan pushes more groups out of the woods they become automatically spotted, and with a mass of targets now in effective range, Gene fires three of his groups, one on the hill and two behind the fences, inflicting a few kills and heavy shock (morale, combat and movement penalties) on one group. But Ryan has another punch coming, and can be seen here pushing more groups into the cornfield where they are hidden from rebel view by the corn stalks.

Ryan pushes four groups under Lt. Colby through the cornfield and up to the fence, where they now engage the three rebel groups under Lt. Saunders. A random firing event means that one of Saunders groups sets fire to the dry grass in front of it, presumbaly burning wadding from a musket. This fire will slowly spread and the rebs are too busy to put it out. 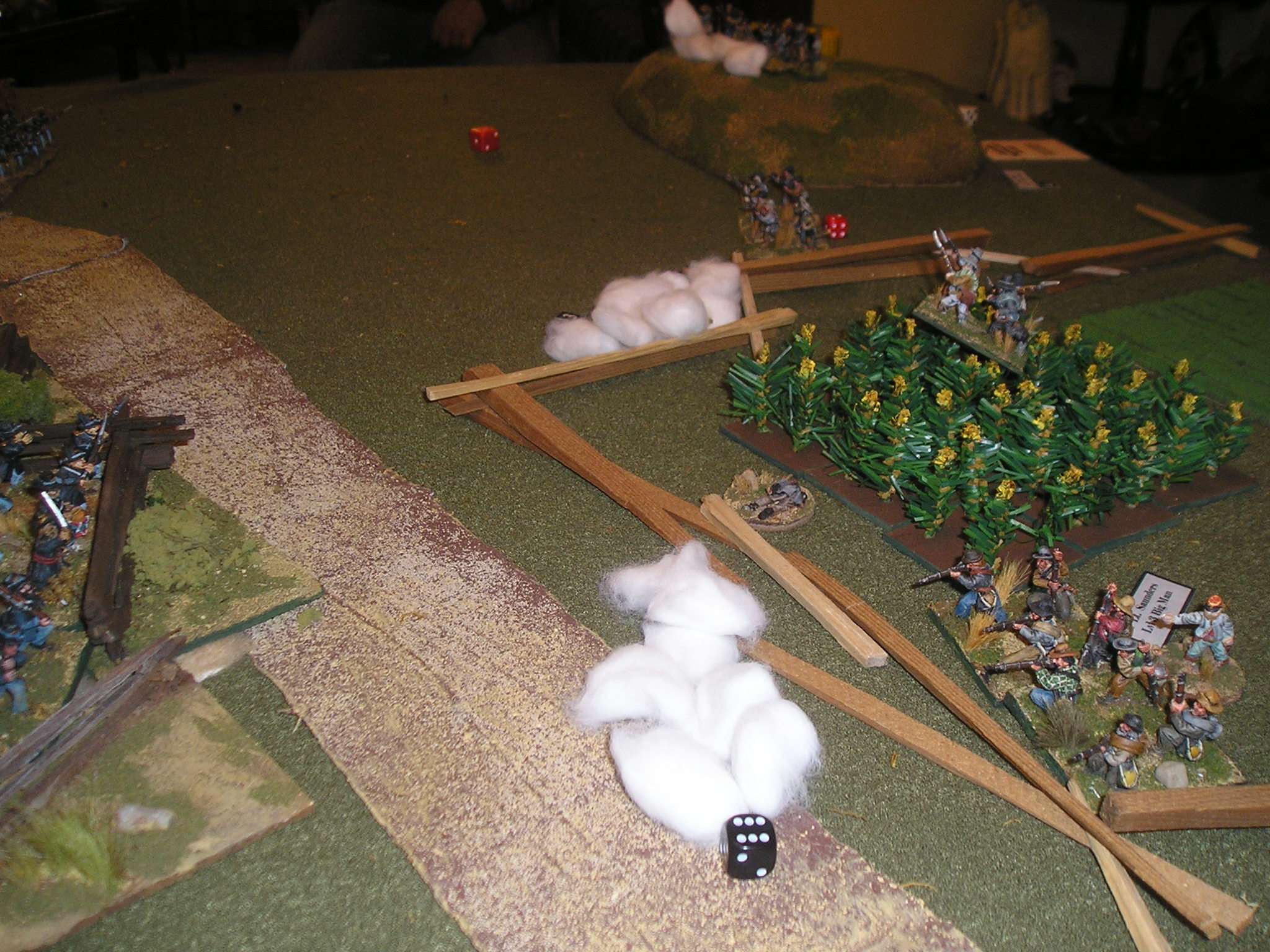 The firefight at the fence rages for several turns, during which the centre rebel group takes the worst of it. Heavy smoke from the grass fire, and from the muzzles of Saunders' muskets (a random firirng event) hang between the two lines and impede accuracy. 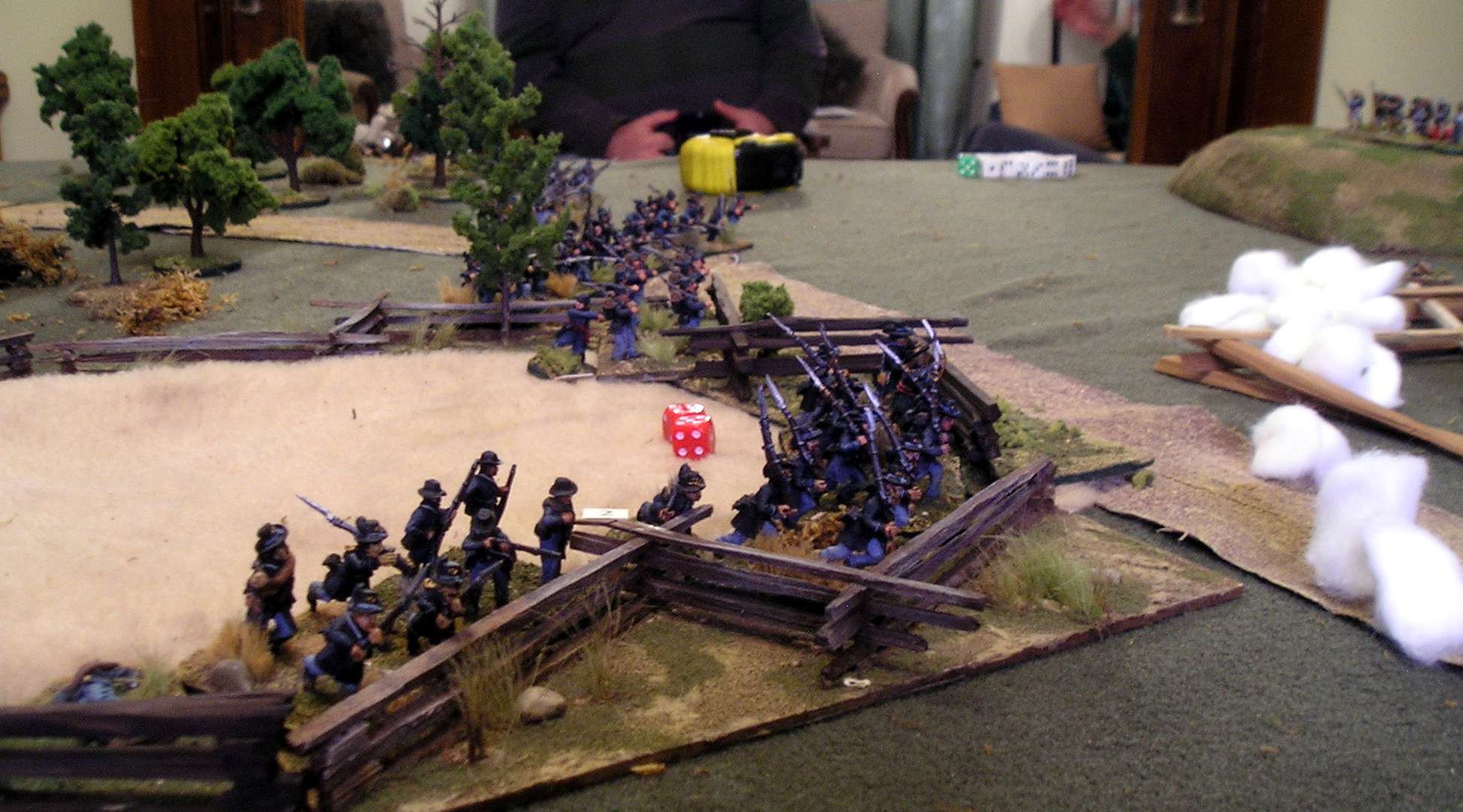 Under the fire of Ryan's formations, Gene's groups on his left have been melting away, routing off the hill and and away from the fencerail and conflagration in the centre. Capt. Leghorn's large formation in the wood has fired once, shaking the Yankees along the fencerail, but Leghorn isn't budging from his wood. 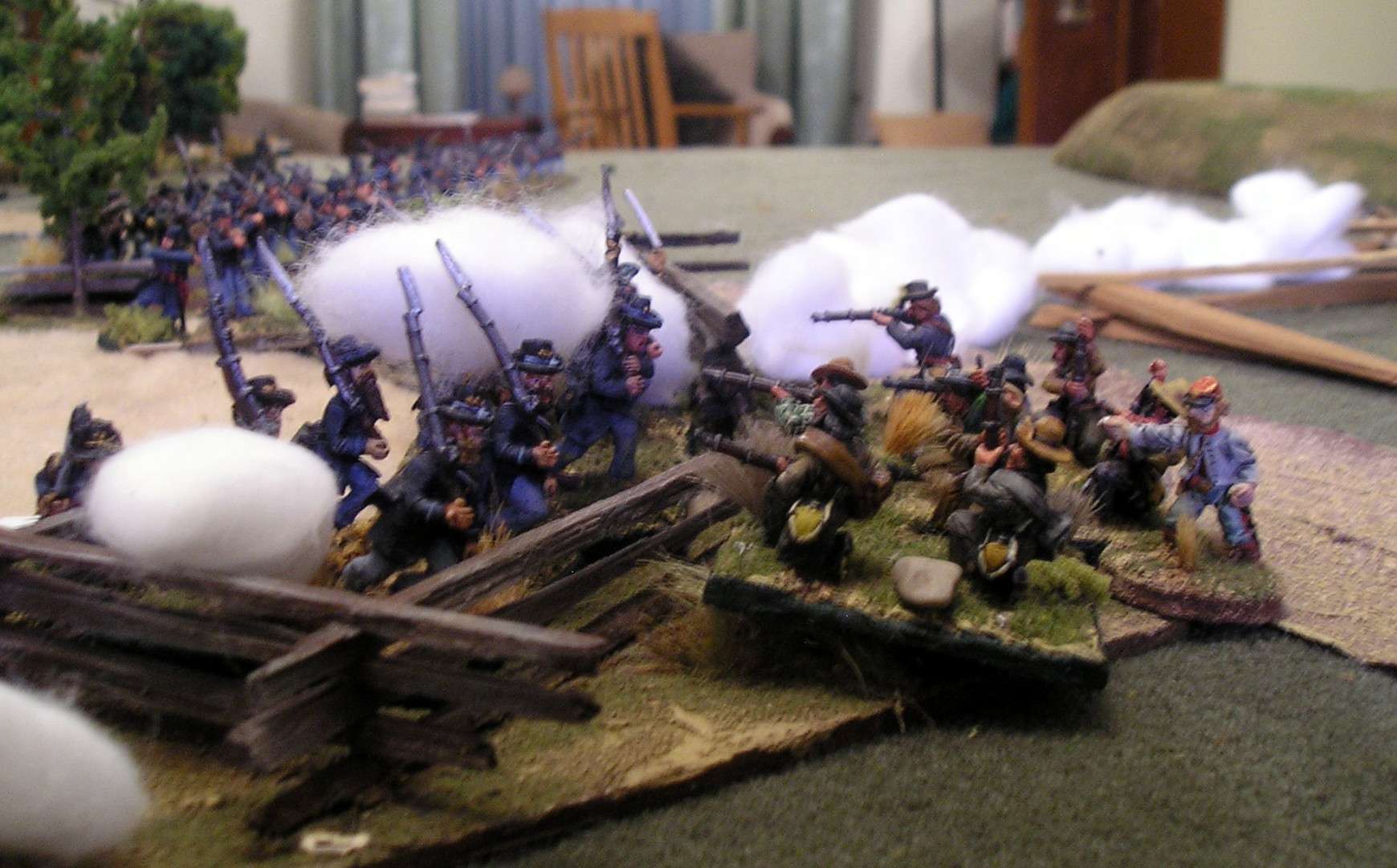 Lt. Saunders decides that now is his chance and he leads his men forward in a desperate charge. He doesn't have the dice to make it across the road, and takes fire from the fenceline, causing some shock. Then the sasparilla card comes up, ending the turn. It all depends now on whose card comes up next. Gene is lucky, Saunder's card comes up again and he charges home. Two rounds of melee follow at the fenceline, with clubbed muskets and fists, but there are too many damn Yankees and Saunders falls back, having lost two men to the Yankee's one, and his group is blown and too shocky to do more good. 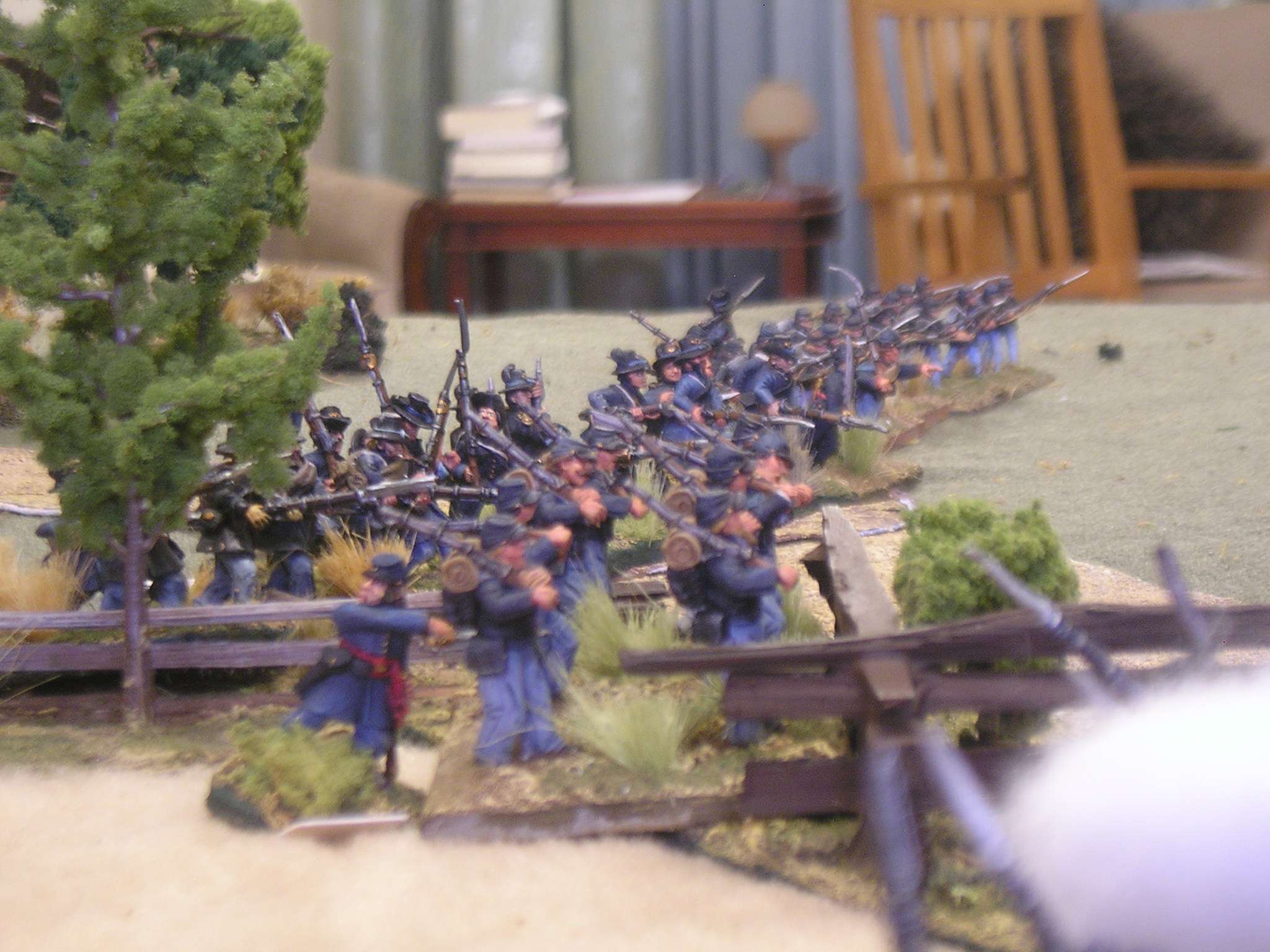 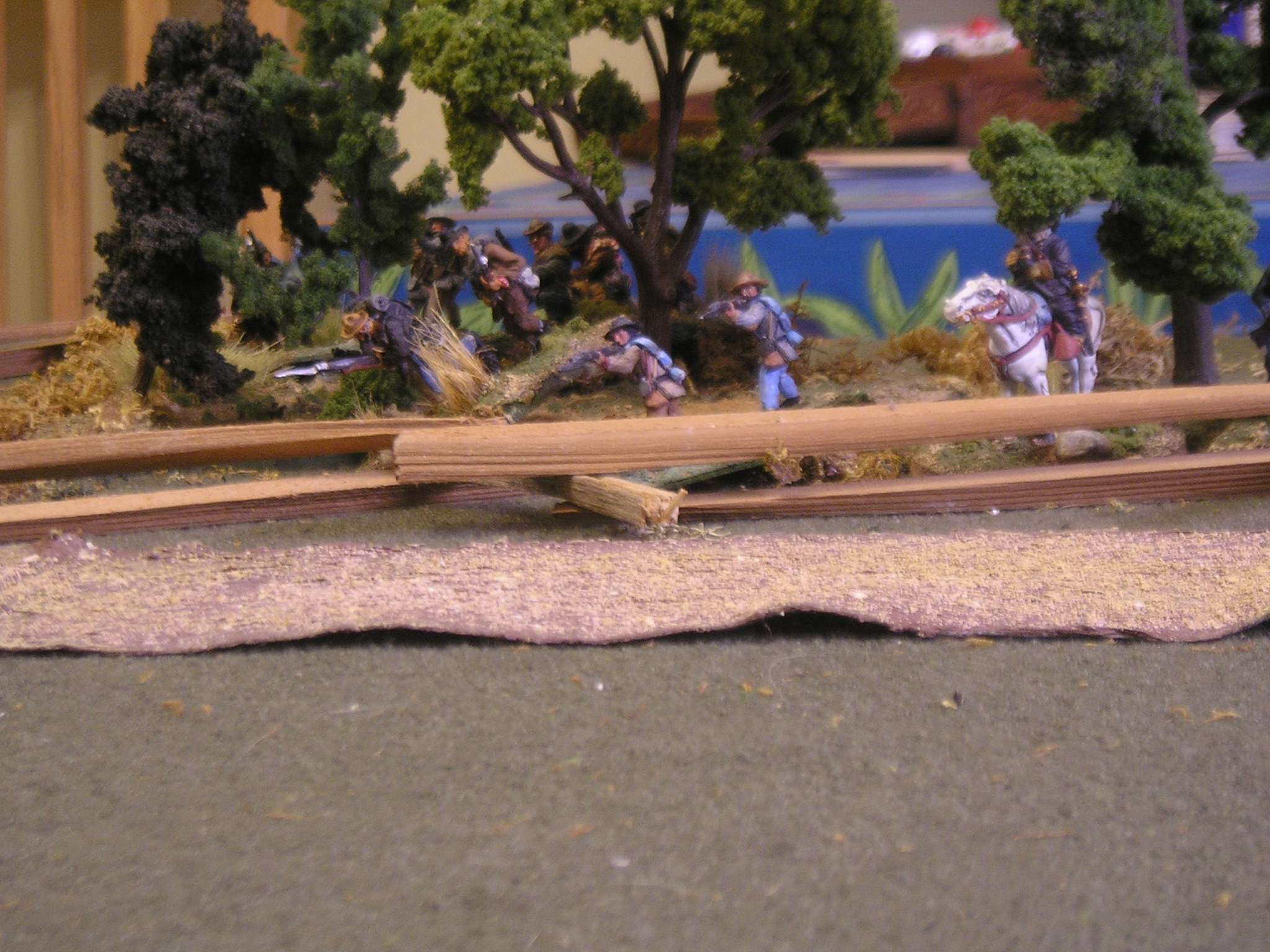 Captain Leghorn and his men remain in the woods. Other than fire one volley, they did nothing. Gene wasn't blessed with his card for two turns, and when it did finally come up, Ryan negated it with the Yellowbelly card, which denies one leader his turn. I suppose this was an example of one of those may ACW situations when a leader dithered, was drunk, or just strangely passive during a battle.

As it was late, and Leghorn's attack had fizzled out, Gene graciously conceded. Gene had some experience gaming, Ryan had no tabletope gaming experience. Both enjoyed the game and liked the rules. I am sure we will try another of Chris' scenarios soon.
Posted by Mad Padre at 5:05 PM