The Bluffsburg Campaign: Some Basic Rules 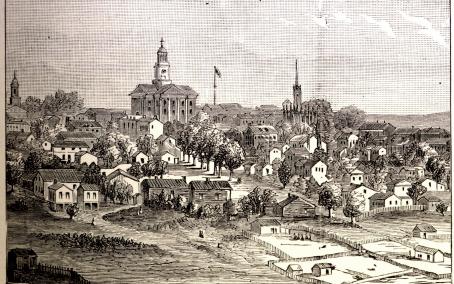 I am glad to report that the ACW campaign mooted here this last month is almost ready to launch. A small band of folks have volunteered to play Generals Hatcher, Moore, and their subordinates at the brigade level.

Here are some basic rules for the ACW campaign. This is a first draft. It is sure to be revised based on questions, feedback, glaring ommissions and inconsistencies, etc.

a) There are three turns to a day of game time. The first two turns represent the morning and afternoon of each day, and the third being nighttime. Typically movement and combat occur during day turns, with night turns being for rest and recuperation.

b) A component of a brigade, such as a regiment or a battery, may be detached and left as garrison on a map point. However, it cannot move again until it is in the presence of its brigade commander or divisional commander.

c) All land movement on the game map is from point to point. It costs a turn (day or night) to move from point to point. Land movement is not allowed during night turns except between points that are controlled by a player. However, units that move by night must rest for the two day and one night turns of the following day, and are penalized if in combat the following day.

d) A brigade may choose one action for each turn from the following list:

Remain stationary while scouting one adjacent point (day turns only)

Embark onto or disembark from river transport

Engage in combat (day turns only)

Recover from combat (day turn only)

Forage on the countryside (day turn only)

a) Combat occurs when a brigade encounters enemy forces. Depending on the scale of the battle, it will be fought on the referee's table using one of two sets of rules: They Couldn't Hit An Elephant for brigade level actions or Terrible Sharp Sword for small actions such as scouting. Players in combat will receive a referee's brief as to initial dispositions, terrain, etc and will have the opportunity to issue orders as the action proceeds.


4) Command, Control and Fog of War

a) This game depends on the concepts of the fog of war and friction. To encourage that end, players will not be identified to one another, even if they are on the same "team". While it is possible that players may identify one another offline, they are encouraged to remain within the spirit of the game.

b) The divisional commander is responsible to issue orders to each of his brigadiers. All orders must be relayed through the referee to be deemed valid. If the divisional commander is at a different location than his brigadier, fresh orders may only be issued by courier and their delivery has a time delay depending on the distance the courier must travel. Couriers can travel by land two points per day turn and one turn per night. There is always a possibility, however remote, that couriers can be intercepted by the enemy.

c) Brigadiers may wish to issue sitreps to the divisional commander as to their location, dispositions, troops in contact, etc. The procedure for doing this is also by courier, as outlined in 4b.

d) Players will not know if adjacent points are occupied by enemy forces unless they scout those locations (see 2d). A scouting attempt may or may not generate useful information as to the identity and size of enemy forces in a given point. It is assumed that all forces will throw out pickets if stationary, or employ scouts and flankers if on the march. However, each battle poses the chance of one force or another achieving a degree of tactical surprise depending on its commander, the state of its troops, the activity it is engaged in, and other factors determined by the umpire.

a) Only the Mississippi River is passable by river units under the command of the divisional commander.

b) The Mississippi River cannot be crossed by land units without river transport. A transport can carry one infantry or cavalry unit or one battery or one supply train. Land units can cross the two minor rivers by existing infrastructure or by constructed pontoon bridges.

c) Naval movement, including the movement of transported land units up and down the river, is conducted by the referee and will take a variable number of turns depending on distance, river conditions.

d) Naval combat will be conducted by the referee and the results reported to the players.

a) Only the towns of Jefferson City and Bluffsburg can be besieged. More to follow on that.

b) Confederate units are always considered to be in supply on friendly territory, unless besieged.

8) Game Length
The game lasts for twenty game days. A Union strategic victory occurs when Bluffsburg falls. Confederate strategic victory occurs if Jefferson City falls. If both towns remain in original control, victory is determined by the referee based on casualties, control of minor towns, ability of a side to be in character and respect fog of war rules, and other whimsical criteria.
Posted by Mad Padre at 11:31 AM