I've made some progress on my American Civil War campaign idea. Thanks to fellow Lardie Thomas Nisvik for putting me on to a program called Mapping Board, which allowed me to generate this electronic version of a map I sketched some years back and almost forgot about. Mapping Board is fairly easy to use, especially if you have some exposure to CAD software and understand the concept of layers. The map below is somewhat larger and more legible if you click on it. 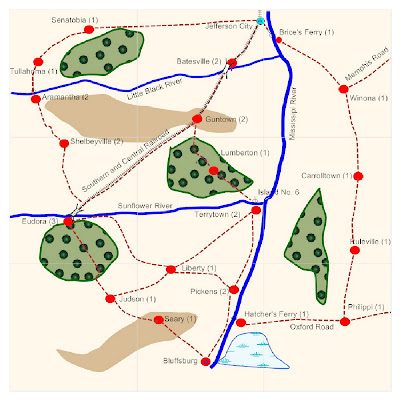 To recap, this is a fictitious section of the Mississippi River in the northern part of the state of Mississippi. Movement on the map will be point to point, with the points being the dots in red representing towns. Red indicates a town begins the game in Confederate control, while the only blue town, Jefferson City, is the Union base of operations for the campaign.

Each town has a number in parentheses after its name. My current thinking is that number will represent both the town's victory point value and the supply value of the town. The supply value represents the number of regiments that a town can support. Regiments in excess of that value will need to be supplied from each side's resources (haven't quite figured out that point yet).

There is some transport infrastructure available, including the Southern and Central Railroad which was intended to connect Jefferson City and Bluffsburg but which ran out of funding at Eudora, bridges at Batesville and Eudora, and several ferries. These assets can be destroyed by the Confederate player if he wants to dedicate units and time to the task.

Union forces, both land and naval, will begin at Jefferson City, and have the objective of capturing Bluffsburg. Confederate forces can begin anywhere on the map other than Jefferson City. Union forces will have a limited transport capability by river but may find that there are confederate defences along the river that may impede river movement. There will also be some capacity for railway movement.

Since neither side will know the other's OOB, and will only know enemy dispositions after contact or through scouting (I expect cavalry will prove an invaluable asset in this game), it should be an interesting and tense game.

Next on the to do list: Write some rules for supply, river and rail movement, and post the biographies of the Confederate and Union commanders. And paint, of course.

All feedback is welcome and kindly encouraged.
Posted by Mad Padre at 8:39 PM