Back in 1976, in the heyday of disco, detente, high inflation, and my vain attempts to get Madeleine Bennett to notice me in Grade 6, Simulations Publications Inc.  published Napoleon’s Last Battles, one of the classic war-games systems.  It was designed by Kevin Zucker, one of the galaxy of talent that SPI’s Jim Dunnigan gathered around him like Napoleon and his marshals.    Kevin went on to found his own company, OSG, and is widely considered one of the authorities on Napoleonic board gaming today.

There is a great review of NLB, including photos of the original counter set, and a thoughtful appreciation of its impact on many subsequent titles, on the sadly inactive Map and Counters blog . on I bought the re-edition of NAB published by Decision Games, which picked up most of the old SPI titles after TSR acquired them.   NLB now comes in a shiny box with new artwork, and the original counters have been updated. 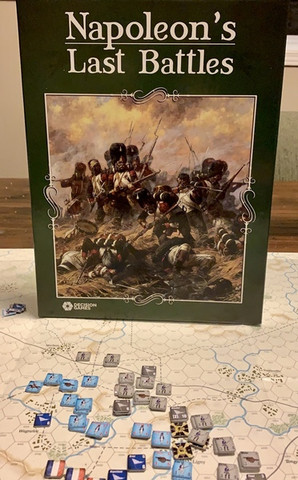 The scale of NLB is operational, with individual counters representing brigades with combat and movement factors.   Optional rules allow for basic command and control; for example, Napoleon can only give orders to three divisional commanders in a turn if they are within his command range of five hexes, and the divisional commanders can only fully employ their units if they are within three hexes.  Combat is hex to hex, though artillery can add their combat factors if two hexes away.  Combat is a simple ratio worked out on a Results Table that only gets bloody if the odds are 4-1 or above, or 1-3 or below.   Otherwise units will safely retreat unless all possible retreat hexes are within the Zone of Control of an enemy unit.  Hex and counter gamers of a certain age will remember what being ZOCed is and why it is fatal.

NLB comes with four games (it was the original SPI Quadrigame) of the Hundred Days: Ligny, Quatre Bras, Wavre and La Belle Alliance.  There are of course rules to play all four games as a campaign game.

As time only permitted me to play one game, I chose Ligny. 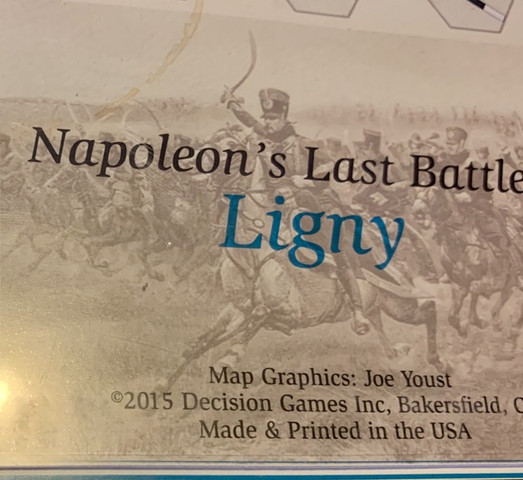 As in the battle, the French player only has six hours of daylight to inflict serious harm on Blucher’s three scattered corps.   The Prussian must hold with Zeiten’s and Pirch’s corps while bringing von Thielmann’s III corps to the rescue. 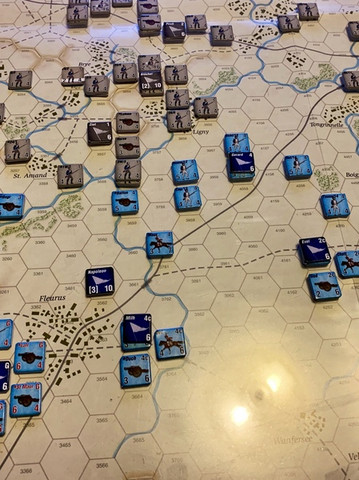 Alas for France, my first run-through did not go so well, as it took me too long to remember how to use ZOCs to my advantage.  At game’s end, Gerard’s Fourth Corps had suffered a mauling at the hands of Von Thielmann’s troops, while the Guard and Vandamme’s III Corps had taken Fleurus easily but were being forced out of Ligny proper. 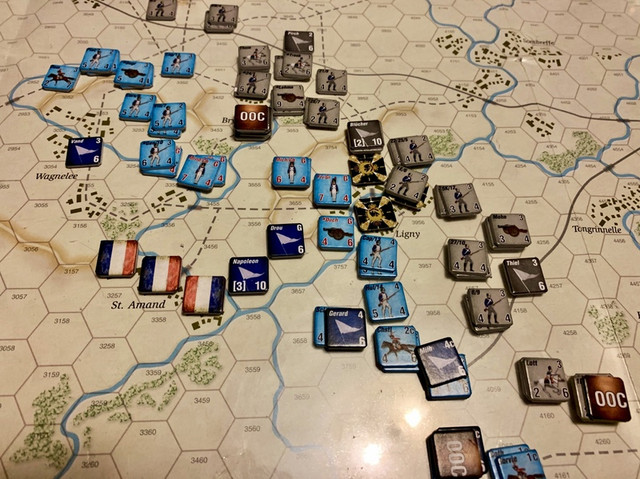 Hero of the game:  Zieten, who held off Napoleon’s last big attack before twilight and who sent the Imperial Guard packing.  Prussian victory! 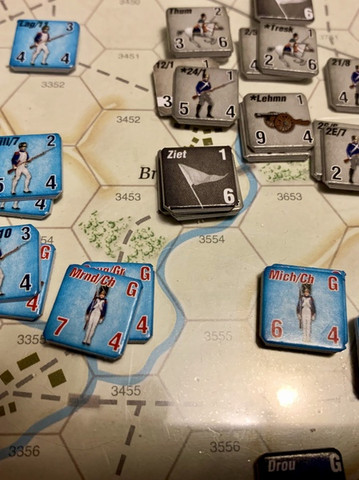 NLB is one of those simple game systems that remains fresh and interesting after fifty years, despite it’s new coat of paint in the Decision Games re-issue.  While it might seem dull because its woefully lacking in the chrome that we have since become accustomed to (although SPI’s monster Waterloo Game, Wellington’s Victory, also published in 1976, has all the complexity one could wish for), NAB does the job.  It presents an operational problem in sufficient detail to challenge the player, and delivers a clean result in a few hours, and works well enough as a solo game.  I would be delighted to play it against you on Vassal, if you care to.

I’m very pleased to have it in my library and look forward to revisiting it again.