My old friend and gaming adversary James (@JamesManto4) recently observed on social media that he’s puzzled by my fascination with extremely granular hex and counter war-games.  It puzzles me too.   I fell into bad company as a young teen and got introduced to SPI monster games by older, debauched boys is all I can say.

It’s generally true that I divide my time unprofitably and inefficiently between paper hex and counter games and miniature games, and that I probably have more unpunched cardboard than I can get through in whatever years remaining that the good Lord graces me with.   I find that operational and strategic level paper games afford a vantage point and level of interest that most miniatures games can’t give me, and when I want a good skirmish or tactical game, out come the minis.   Also, both types of games have their own kinds of aesthetic appeal for me.

Are you still reading this?  I haven’t even gotten to my main point yet.  So here it is.   I gave up half way through Russo-Japanese War by Avalanche Press.  I just couldn’t pretend that I was enjoying it any longer and having recently turned 58, I am more and more aware that life is short.

Here’s the problem.   Even through pre-dreadnoughts, those ungainly, smoke-belching, baroque iron castles of the sea, have their own fascination, and even though the Russo-Japanese naval war has its many fascinations - doomed fleets of a doomed empire, valour, technology at the cusp of change - the game itself is less than fascinating.   How could it not be inspiring? The problem is that it’s not a very interesting war to game because the quality of the two sides was so varied.  The Japanese were a highly drilled, efficient and well-led naval service, and the Russians, well, were not.   Any game which wants to model this qualitative asymmetry has to penalize the Russians, so in this game, while you hit on a 6 on a d6 at long range (5 o 6 on a d6 at close), if you’re the Russian player you then have to roll a second confirmation roll (5 or 6 a d6 for each hit) to see if the shell actually hits its target.  The Russian confirmation gets slightly easier (4-6 on a d6) after eight rounds of combat, but the handicap against the Czar’s ships is still very severe.

RJW follows Avalanche Press’ Great War at Sea rules system, with a host of variations for the pre-dreadnought era.   With two players, the strategic game might be interesting as both sides have to secretly plot their moves, though the general objectives are fairly obvious - in the first phase of the war, the Japanese are guaranteed to show up at Port Arthur in force at a certain time after sailing from their home ports because that’s the main prize.  I suppose the Tsushima part might be more interesting for two players, but as a solo game, even with some random directional die rolls to make things fun, the COAs for both sides were fairly obvious.  There is some strategic challenge for the Japanese because their total fleet numbers are inferior and so their margin for error is slim, but realistically and historically, they can sink the Russians in two job lots with little fear of disaster.

As a tactical game, RJW isn’t that much fun, to be honest.  I decided to sortie the whole Russian fleet from Port Arthur to try and stop the Japanese from landing troops on the Korean peninsula, which meant that they ran into the main Japanese force early on.    I then deployed all the ships to the tactical map. 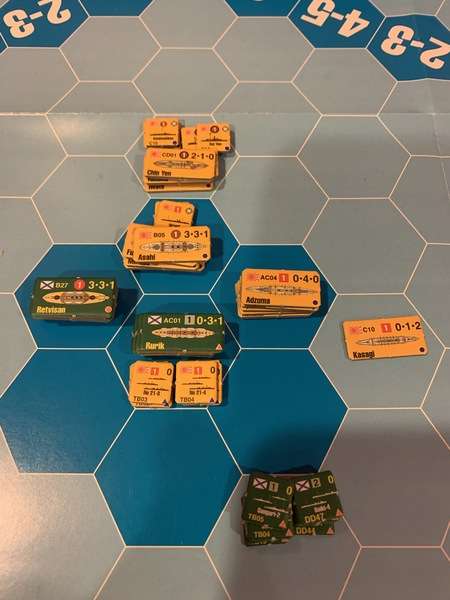 The tactical phases are IGO/UGO start with random determination of initiative, through logically the Japanese, being better sailors, should always have initiative.   Ships of different speed classes are then moved in sequences,  each speed class getting its own sequence with fastest going first, and between each sequence there is a round of gunfire and then torpedoes if close enough, and the incentive to get close gives the game a sense of Age of Sail. There is a stacking limit of capital ships per hex, and the movement rules are too abstract to allow for subtleties like trying to cross the enemy’s T as in Jutland.  You just get in close and then it’s Fire Away Flanagan.  Ships have Primary, Secondary, and No armour ratings.  Likewise there are three gunfire ratings: Primary, Secondary, and Tertiary.  Primary shells penetrate all armour and do extra damage for lightly armoured ships.  Secondary shells only penetrate secondary or no armour, and Tertiary shells only damage unarmored ships such as destroyed and torpedo boats.   Torpedoes are bow mounted (less effective) and hull mounted (more effective) and are basically close range weapons with a more destructive effect.

Damage is marked off as Hull hits, Gun hits, Torpedo hits, and occasionally critical hits, using ship logs.  For a large action like my Port Arthur battle, it becomes a dreary round of checking the firing ship to see if it has lost any gun factors, rolling dice, and then marking off boxes on the target ship as necessary.   I remember playing with ship logs as a kid with Avalon Hill’s Wooden Ships and Iron Men and that didn’t seem a bother then, but as I said earlier, life is shorter now.  It boils down to lots of die rolling, lots of paper consulting, and lots of marking off boxes.  To make a long story short, the Russians were getting the worst of it and their battleships were generally in a bad way, with one sunk.   There was some prospect of the Russian torpedo boats getting into the IJN line of battle, but it was a faint hope.   Honestly I couldn’t be bothered finishing it.

To be fair, the RJW scenario book as a ton of history and detail, and the full OOBs for both sides are represented in the counter mix, so the game could be a great resource for someone who wanted to play this era using miniature ships.   Smaller actions might be fun, particularly if you abandoned history and made both sides equal in capability.   It might also be fun to introduce British, German and American ships.  However, out of the box, as is, my hopes for RJW sadly foundered and then sank under the waves.

Image:  the author’s hopes for a fun game.