Relocating my gaming table to a roomier part of the basement has given me an incentive to get out my ACW figures, revisit Too Fat Lardies’ Sharpe Practice, and throw some dice.  I especially wanted to give my small but growing cavalry some love. The descriptions were written while I tweeted the game using my @MarshalLuigi account.  The table was randomly set up by placing a random selection of Terrain Cards from Sam Mustafa’s Longstreet rules in 12 sections of the table.

Tennessee, 1862. Captain Morrison O’Harnett, commanding C Company, 15th Illinois Cavalry, is ordered to scout a farm along a road designated for a divisional advance the next day. He has four troops of cavalry rated as Dragoons in Sharpe Practice terms. 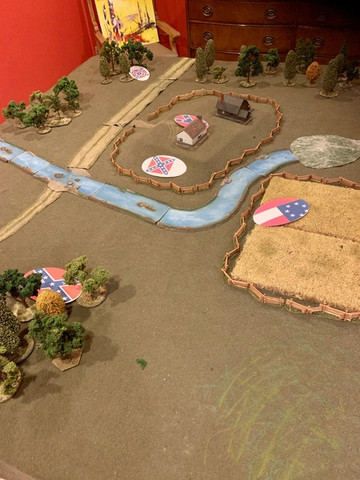 O’Harnett orders Lt. Thaddeus (Tad) MacQuarrie to take two dismounted troops and scout the woods on either side of the road approaching the farm. Tad takes one side and orders Sgt Esau Landiss to take the other side.

O’Harnett keeps his other two troops in the saddle, ready to move forward as required. (Tables I wrote to make it interesting). 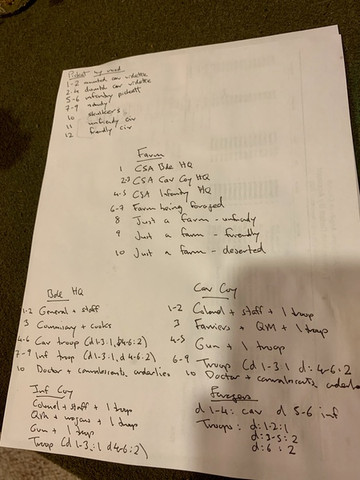 Sgt Landiss and his men warily approach what looks like a campsite in the woods south of the road but the die roll says nobody. Just an old fire pit and some junk. There are no Rebs in the wood. Perhaps pickets went off to a neighbouring farm to beg some hot johnnie cakes, but it’s a lucky break for the Union. 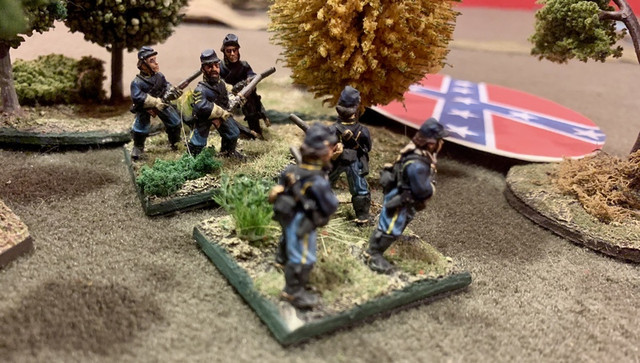 Lt. MacQuarrie now has two dismounted troops in the woods with a good view of the farm. He pulls out his spyglass to have a look see. The Lt. whistles softly. He sees a troop of cavalry being watered in the stream by the field, while at the farm he sees some wagons, and comfortable looking men in nice uniforms lounging with cigars. “Confound me if that’s not a headquarters of some sort!”

Lt. MacQuarrie reports the situation to Capt. O’Harnett. “Not a lot of Johnnies, and they all seem free and easy. Reckon we could ride in and scoop them up pretty neatly.” The Captain strokes his luxuriant moustache thoughtfully for a moment. 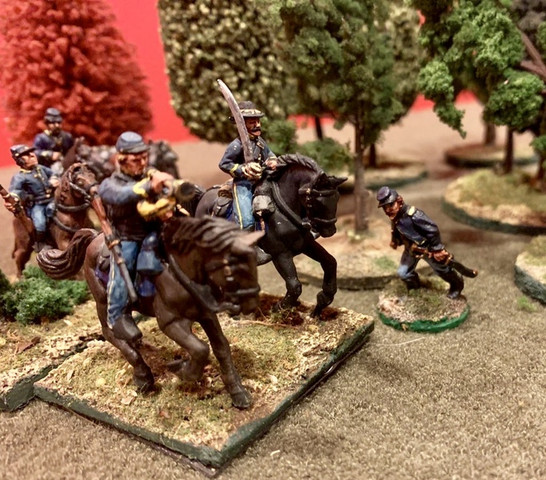 So, quick aside, you’ve probably noticed the red paint on the walls (very 1990s!) which makes the battle look like an old set from the original Star Trek.  Santa gave me some model railroad backdrops which will get set up in due course. 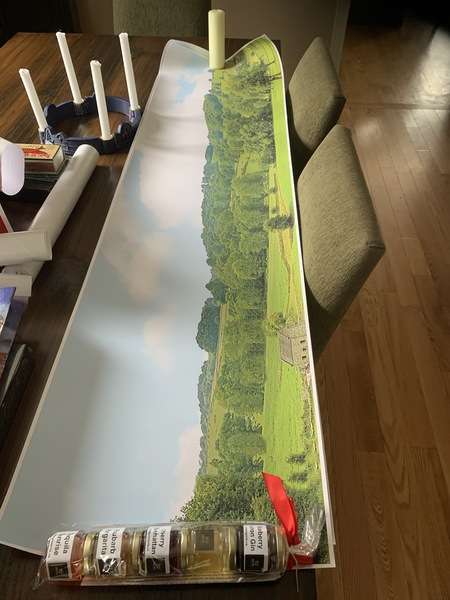 Capt. O’Harnett decides it would be a fine thing to bag a rebel HQ and orders two mounted groups forward in formation at the canter. They come into the table and move briskly down the road towards the ford. 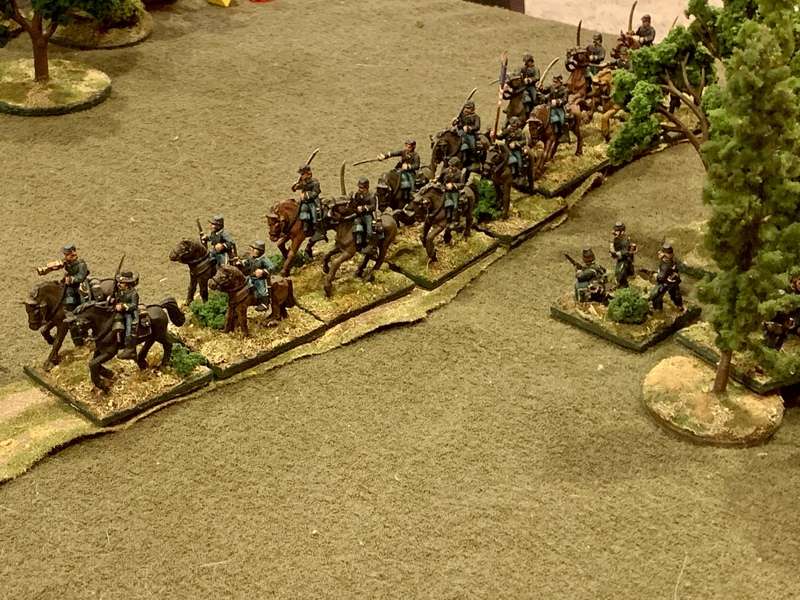 Sgt. Landiss and his dismounted group open a brisk fire with their cavalry carbines on the rebel troopers watering their horses, but score no hits. 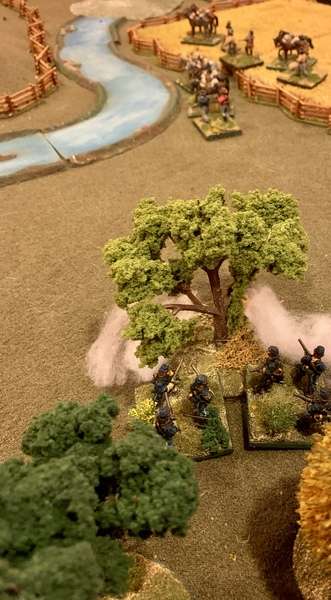 At the farm, Colonel Robert Thoroughgood, 14th Mississippi Cavalry, is enjoying a cheroot when he hears the carbines and sees the Yankees hove into view. “Damn their eyes, what are my confounded pickets doing, letting them fellows so close?”

Sgt Alonso Harker of the 14th MS Cav and his men were lounging about, playing cards and cooking. He starts getting his group into their saddles. 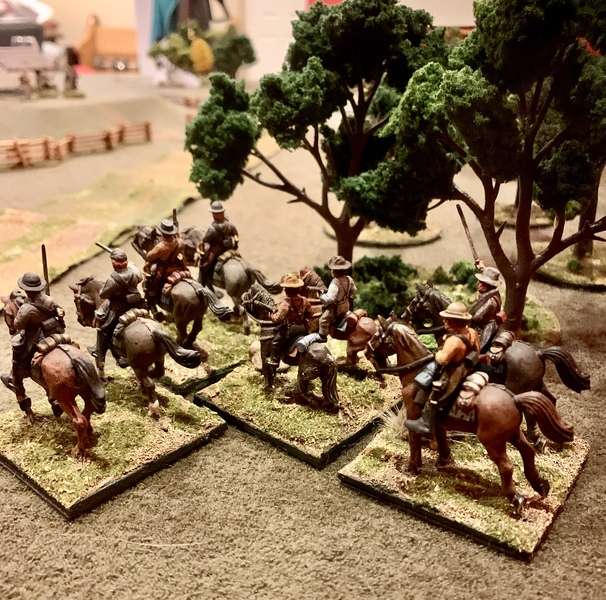 Capt O’Harnett has four command chits and uses them to give his formation of two mounted groups a bonus move. They lose their canter bonus while crossing the ford but are in a good position to burst into the farm before the rebs can react.

Sgt Landiss’ Yank troopers get to shoot again. I realize that with their breech loading carbines, in #SharpePractice they don’t spend an action reloading, so they get two shots each. Two pts shock on the Rev troopers who are frantically looking for saddles, tack and weapons.

On the receiving end of this fire, Sgt Lucius Biggs is a man with a plan. He uses the two rebel command chits in play to boost his Initiative to three, rallying away the shock, getting the horses back, and shoving his men into a firing line at the fence. 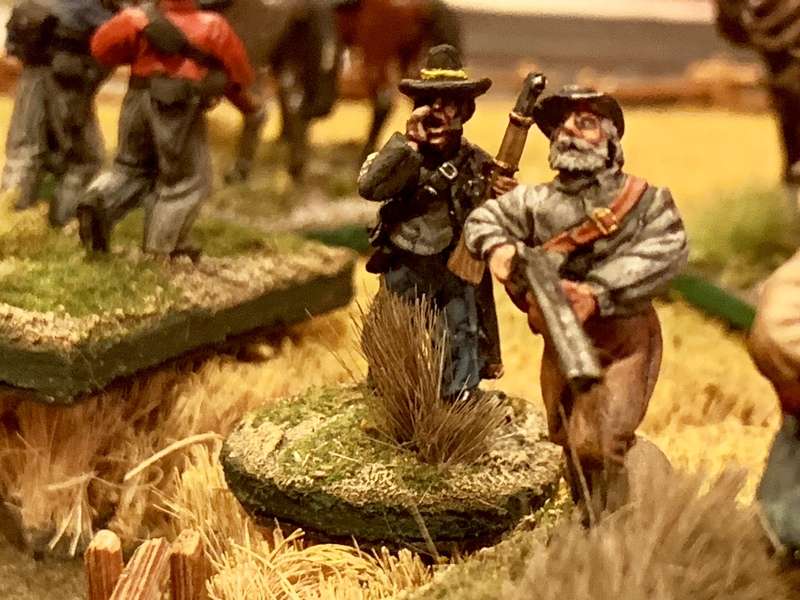 O’Harnett’s column rides like thunder and turns into the farmyard while the rebel headquarters staff are highly confused. Finally the reb Colonel gets his chit and does the only sensible thing, ordering his men into the farmhouse and barn. 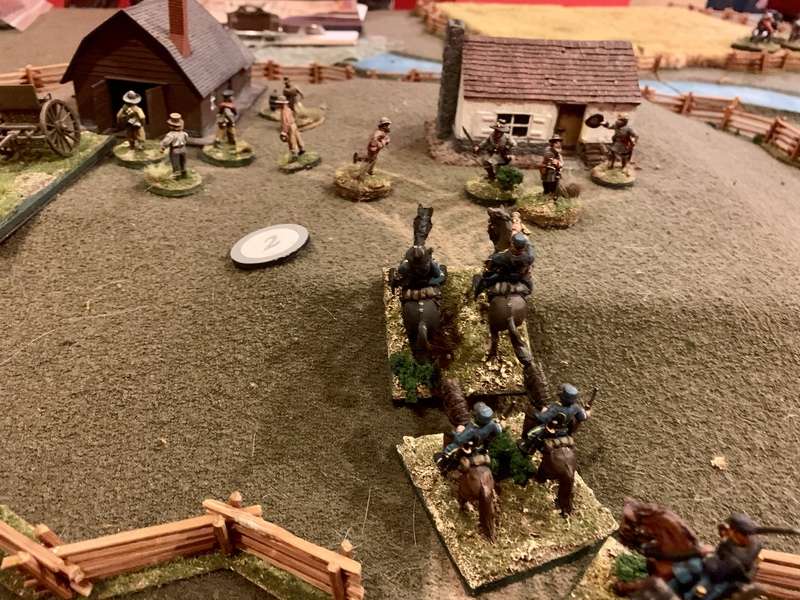 Sgt Alonso Harker urges his men forward at the canter. “C’mon boys, let’s go pull the Colonel’s bacon out of the fire and maybe he’ll share some of his corn liquor!” 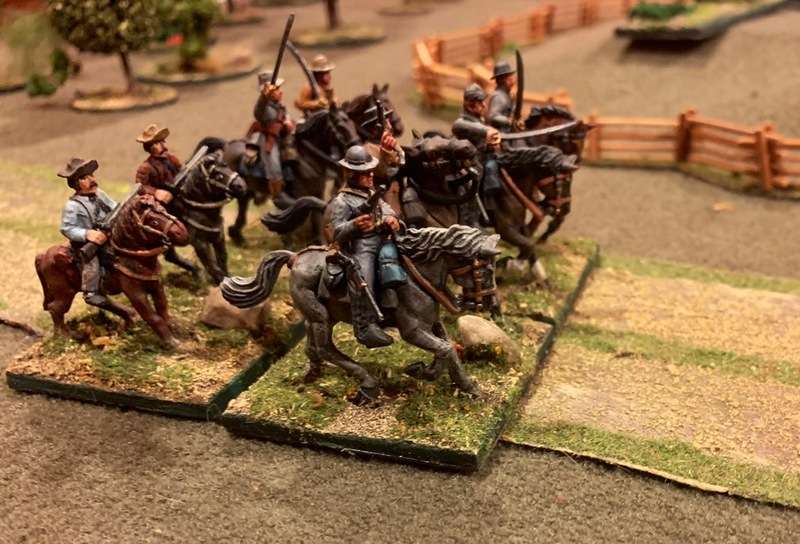 Captain O’Harnett decides that it would foolish to ride around the buildings as targets. He spends his turn ordering the lead group to dismount and detaches his second group to face the one group of rebel cavalry that pose a threat. 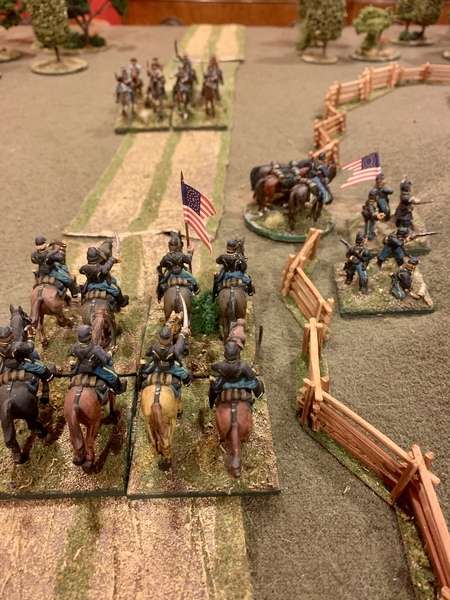 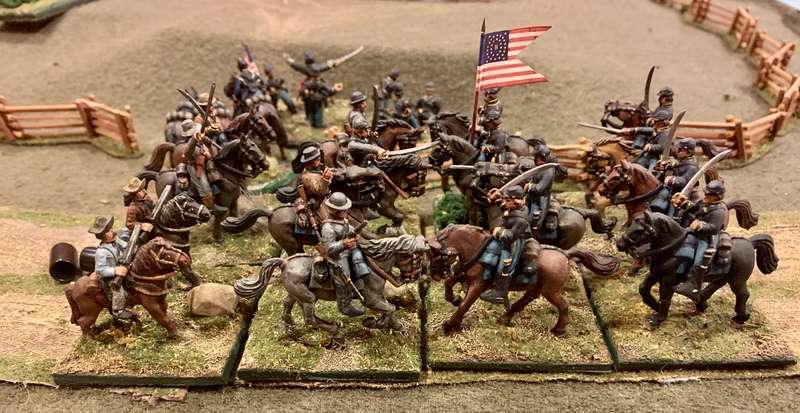 In two rounds of Fisticuffs, they hold their own. Both groups lose four figures, but the rebs fall back when their Shock goes to 5. 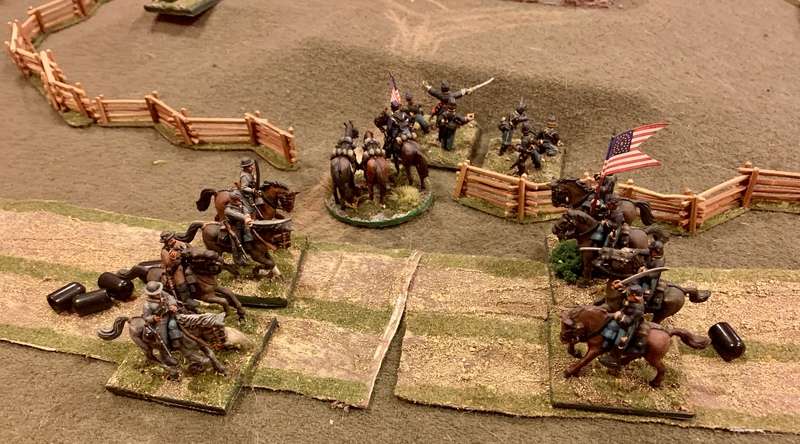 Col. Thoroughgood and three of his staff officers fire ineffectually at longer range with their revolvers. It was probably a bad plan that all four officers ran into the house and a group of leaderless troopers ran into the barn. A random event (3 command chits drawn in a row) mean that the reb troopers in the barn panic their mounts when they start shooting with their carbines. The horses spook and run around the barn, causing chaos.

Capt O’Halloran’s six troopers pepper the farmhouse with their Sharps carbines, killing Major Wood, the 14th Mississippi’s adjutant, as he peers out the window

Chaplain Windman and Quartermaster Murray trade shots with the dismounted US troopers. Their revolvers vs Sharp breachloading carbines aren’t a fair fight, but they distract enough that Col. Thoroughgood can sprint across the farmyard. Thoroughgood runs like the wind (double 6es on his movement roll) and dives through the barn door in a hail of bullets, which kill two of the rebel troopers covering him. The Yankee fire on the farm is viciously effective. 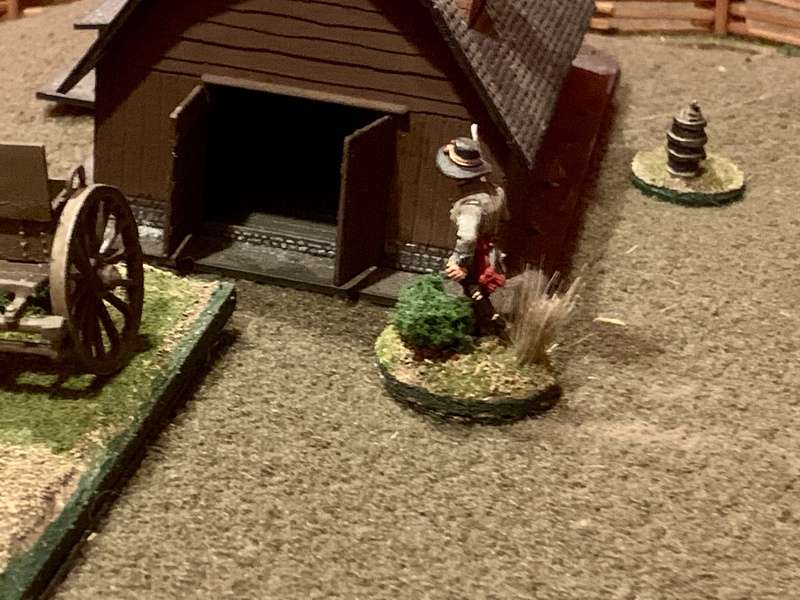 Captain O’Harnett dismounts his remaining four troopers and has them join his firing line. The surviving Mississippi horse are retiring and no immediate threat. Lt MacQuarrie is bringing his group up to provide flank cover for the assault on the farm.

In the barn, Thoroughgood watches as another fusillade of Yankee gunfire shreds the farmhouse. The remaining two defenders, Chaplain Windman and QM Murray, both go down in the hail of carbine fire. “Boys, if we stay here, we die. Mount up and get ready to ride like hell”. 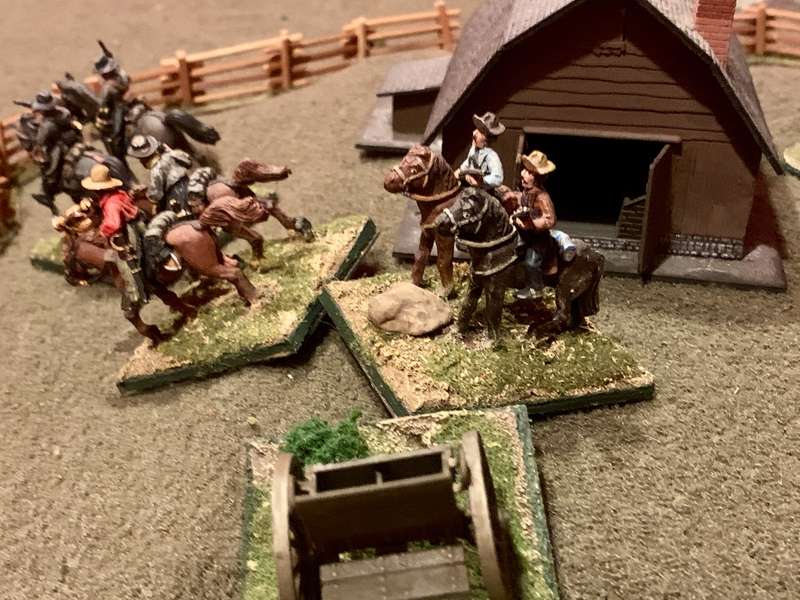 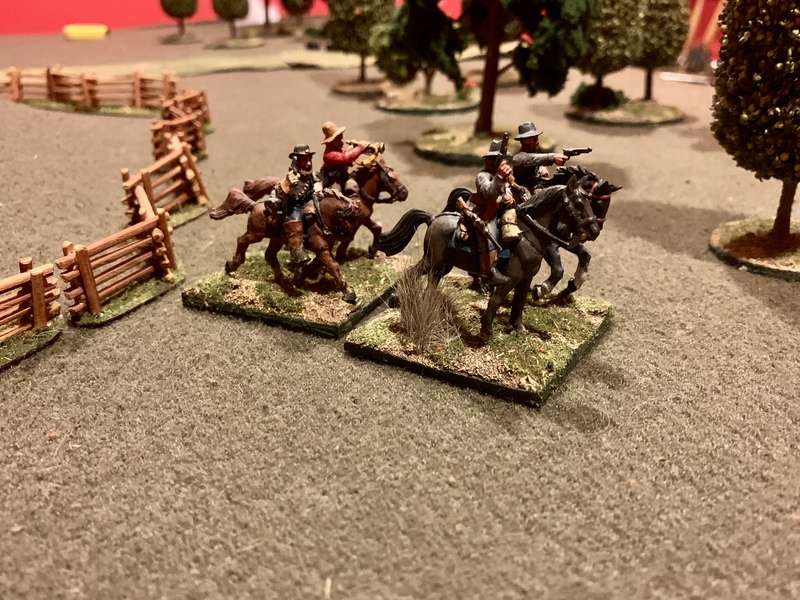 Meanwhile, in the meadow by the stream, Sgt Biggs is trading shots with the Yanks in the woods. Unfortunately a random effect means that an eager trooper discharged his carbine into the Sergeant’s left buttock. Cursing, he is hauled away by his troopers as they break contact.

This concludes the fight for Hickory Farm. Inside the bloody farmhouse, Captain O’Harnett finds papers and maps giving rebel dispositions in the region. His colonel will be pleased. The Illinoisian troopers are equally happy to have captured Col. Thoroughgood’s liquor and cigars.

It was fun to get out Sharpe Practice and reacquaint myself with the rules. A randomly generated table and some chance dispositions at the start made an interesting game for my available cavalry figures. The US were lucky to gain surprise and exploited it well, while the rebels never really got off their back foot. One lesson is that breechloading weapons are a huge advantage in a firefight as, unlike muzzleloaders, it doesn’t take an action to reload them. US cavalry can thus be quite fearsome when dismounted, and this advantage could be reasonably offset by giving the CSA superior numbers.

Maybe we will see some of these characters in another skirmish. Cheers and thanks for reading.