I was totally bowled over by all the support that I received on my last post, where I resumed blogging after my wife’s death last winter.   Thank you all so much. It’s been a few months since then, so a little catch up.  Back in May I said here that “A lovely lady, a cancer widow, has entered my life and made it much richer”.   Well, “much richer” barely describes half of it.    Her name is Joy, and she is well-named.

I met her through the Anglican parish where I serve as a volunteer assistant priest.  Her husband was being treated for cancer at the same hospital where Kay was a frequent flyer, so we often crossed paths and would meet for coffee and mutual encouragement, telling the war stories that only caregivers can really understand.   Then, last November, mysteriously and ten days apart, first Randy died, then Kay.   That winter was hard, but we got through it, checking in and feeding each other as necessary, and gradually realizing that life, and love, can go on. 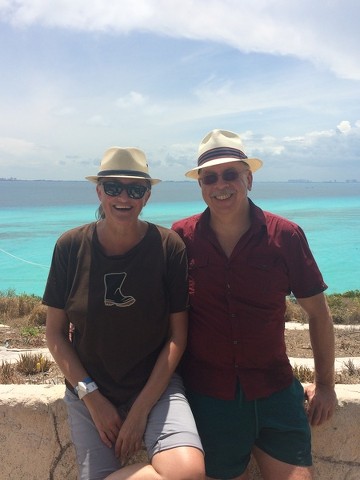 In April we celebrated Joy’s birthday with a trip to Mexico.   On the flight home, we talked about how difficult it was visiting each other’s houses with a dog and three cats in the equation, and so high above the Gulf of Mexico we decided to throw in together. 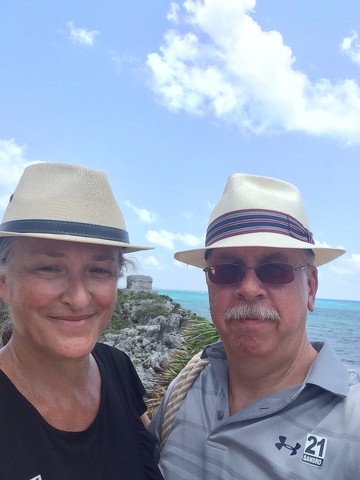 It was a splendid decision, and looking back on it, totally the right one.   We weren’t expecting to find love so quickly, but as is the case with a long terminal illness, we had both been in mourning for a year before our spouses passed, and coming back into the land of the living was an unexpected blessing.   As C.S. Lewis said in another context, I was truly Surprised by Joy.

As I moved into Joy’s house, she was a little dismayed at what came with me.   Most of my furniture I left for the tenants of my house to enjoy, but I did bring a steady stream of boxes full of games, terrain, and little soldiers.     She was a good sport, even as she lamented how her basement was now overrun with things that she didn’t truly understand, but she did appreciate the paintwork on my “little men”.

In late May, a bemused Joy had the chance to see some of my collection set up on her dining room table when my mate James came up the three hours from Stratford for one of our ongoing EX THUNDERING DICE dustups.     We don’t see each other as much as we’d like, so we try to get a lot out of our EX TD weekends.  Here the hordes of Middle Earth prepare to do battle - I think we each used about 40 points of figures using our favourite quick play fantasy rules, Dragon Rampant. 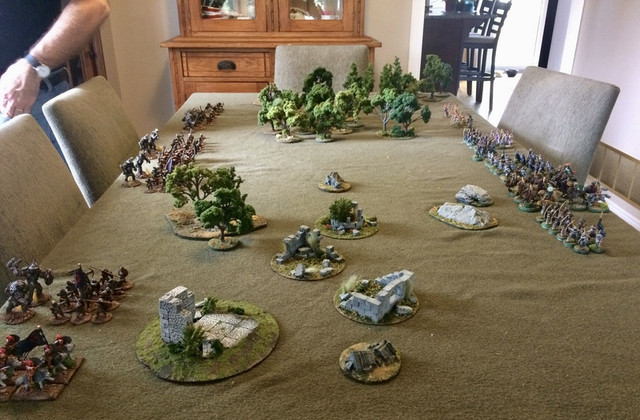 I love James’ work, and am always curious to see his latest units.   That day he debuted this impressive unit of wolf riders, old Vendel figures, with a handprinted banner of little doggies circling the Eye of Mordor.  Joy, who adores husky dogs, was suitably impressed. 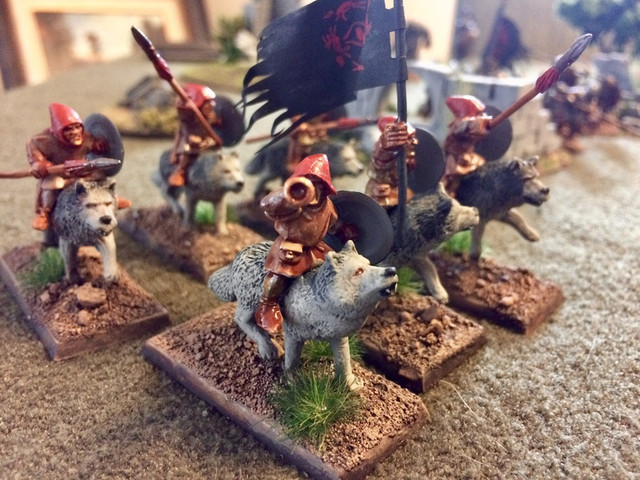 Much mayhem occurred that day, and while the Wolf Riders died in the end, they were a right pain in the arse.  Even when they were reduced to one figure, they tied up my Rohirrim cavalry and were generally annoying.  Good doggies. 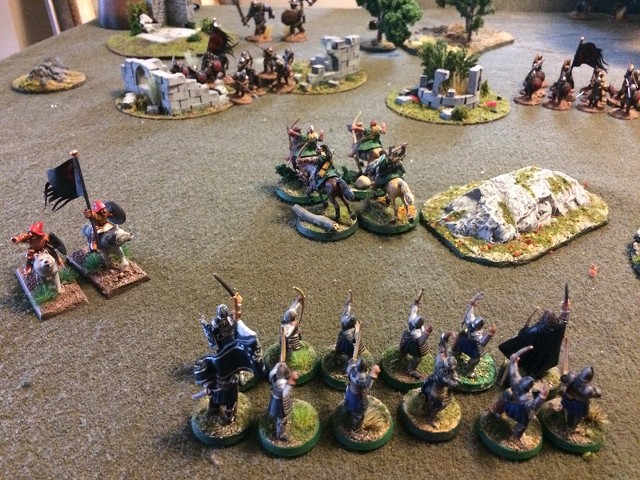 James has some more pictures here.  Also that weekend, I tried to introduce James to one of my fav GMT games, Space Empires, but I think it was all a bit much for him.  On Saturday we decided to play TFL’s Sharp Practice, but the unpacking was still in progress and since I couldn’t find my ACW figures, we used my SYW figures, Russians versus Turks.   It made me realize how much I enjoyed this period, and how much I would like to get back into it. Joy and I spent a lot of time together this summer, solidifying our relationship, and everyone we know says we just look like a pair of happy idiot kids, so that bodes well, I think.

There was a little more gaming, and I’ll tell you some more about that sometime.   Oh yes, there is a project involving Space Kitties.    More to follow.

Blessings to all of you in the land of the living.