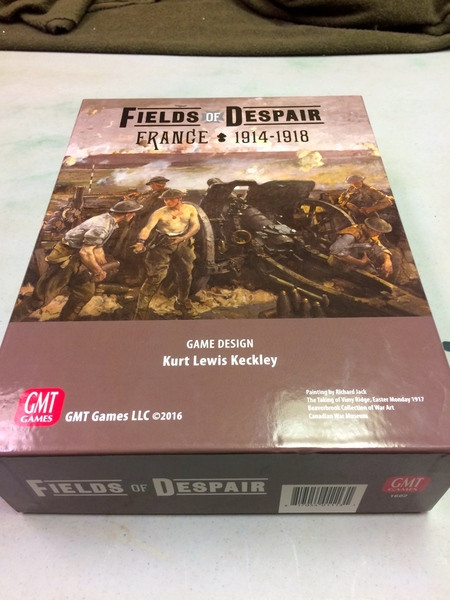 I couldn’t resist this title by GMT games - any World War One game generally goes to the head of my purchasing queue, and this one was no exception.    Fields of Despair (FOD) is a strategic scale block game designed by Kurt Lewis Keckley - you can find his blog here and follow him on Twitter at @PhotoAvalanche .  It comes with an attractive hardback folding map, several hundred counters and blocks which need to be stickered (thankfully, for Command and Colours fans, only on one side).

I’ve only played FoD solo which is a pity because that is rather like driving a Ferrari in stop and go traffic and never getting out of second gear.  This is a game designed for two players, and the one-sided blocks mean that you never know exactly what is waiting for you when you launch an attack.   I can’t wait to try this game head to head because the suspense would be epic.   The blocks themselves are the heart of the game, reminiscent of the four-sided blocks used in well-known Columbia games such as Quebec 1759 and Waterloo.   Blocks range from 1 to 4 up to 17 - 20 Strength Points, with 20SP blocks representing a multi-corps army.   Most blocks represent infantry, with a few cavalry units given to each side.

In addition, players can commit artillery to key battles (representing strategic artillery assets) and can also commit aerial units in the hopes of forcing the other player to reveal some or all of his blocks before battle.   Aerial reconnaissance is not a sure thing, however, because the defending (or passive) player can throw in his/her air units as well to try and keep the observer planes from carrying out their missions.   Besides his/her own blocks, the defender can try to hold the line with a few key fortresses, such as Verdun, which are very hard nuts to crack.

Here is a shot of the game board in the early stages of the three-turn introductory scenario, set in 1914.  Infantry units move two hexes a turn, and cavalry three, but units have to stop when they enter an enemy controlled hex.  Unless all defending units are removed from a hex, it is considered contested and remains in the defender’s control, so the ownership counters seen here are quite important for deterring victory. 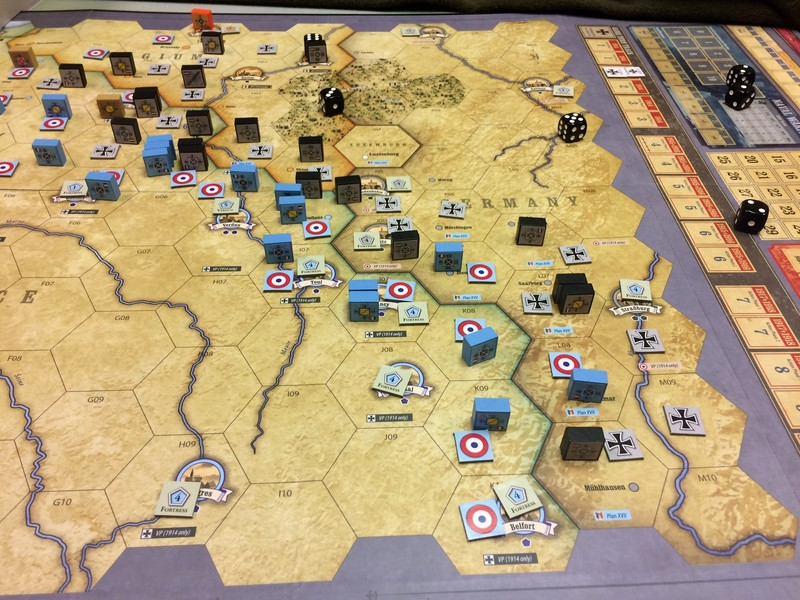 And the same game at the end.  The Germans have taken heavy losses, but have done worse damage to the French, and have come within an ace of capturing Paris before the end of the game, which the Germans won 9-7 based on hexes control.  The British (tan counters) are slowly building up strength, but were separated from their French allies by the German advance. 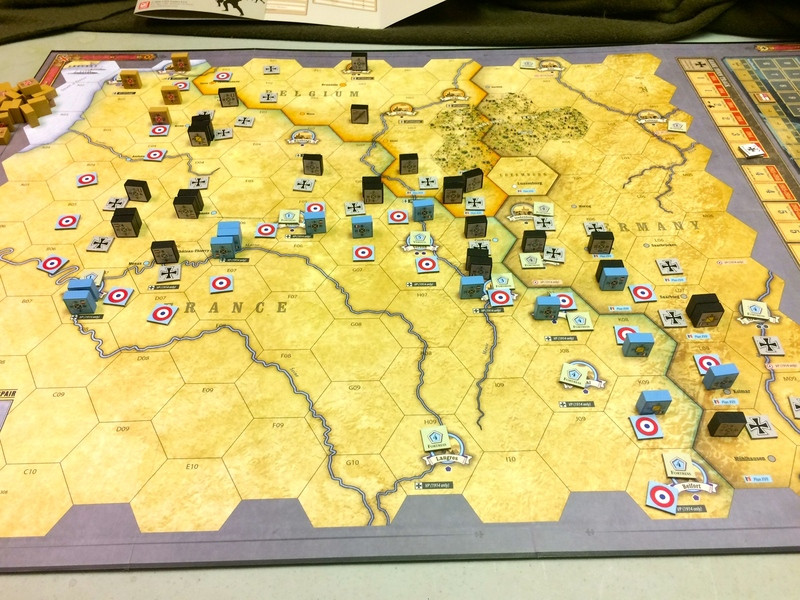 In retrospect this game might have gone better for the French if played H2H, since playing it solo it was impossible as the stronger German side to hit the French where they were weakest.   There is a slightly intimidating solitaire system for one of the late war scenarios, which I hope to try at some point.

WW1 fans will appreciate the fact that the game is highly attritional.  While breakthroughs are possible and  can be exploited, they are difficult to achieve and hard to exploit.  Manpower is a very finite quantity in the game.  The Germans have an initial advantage, and their army grows considerably in 1914, but like the other countries the manpower streams dry up later in the war, so every SP lost early in the game is one you won’t have later when you may need it.

There are several economics and technology R&D tracks, where players can put resources into developing new weapons (poison gas, gas masks, better aircraft, tanks, etc) and also put resources into maintaining the Allied blockade vs the German submarine campaign, ether of which can hurt the other side’s resources.    The German player must also think about the second front with Russia, which is represented in a very abstract but effective way.  Don’t put enough resources into the Russian front and you as the German can lose the game.

While the game does not use a card system like Ted Raicer’s WW1 classic Paths of Glory, it does have a series of technology thresholds that introduces events like aerial combat, the start of trench warfare, as well as political events like the US entry to the war.

FoD is a simple and highly playable game with enough chrome to give it a good feel for the strategic choices faced by the combatants in the Great War on the Western Front.   Fans of WW1 should check this out.  While it would be huge fun with an opponent, the solitaire mechanism looks promising and there is also Vassal.

Speaking of Vassal, here is some bonus WW1 content.  This is a screen shot of a game that Jonathan Freitag and I are playing online - it is from the introductory scenario of GMT’s 1914: Offensive a outrance, from their operational monster game about the first months of WW1 in the West.  My French divisions begin the war by hurling themselves on the Boche to erase the infamy of 1870 and to recapture France’s provinces.   Latest communiques from French HQ confirm that all is going well.

The cool thing about this game is that it is a 100% digital version of the real game, and while the going is slow, Jon and I are learning a lot about Vassal in the process. 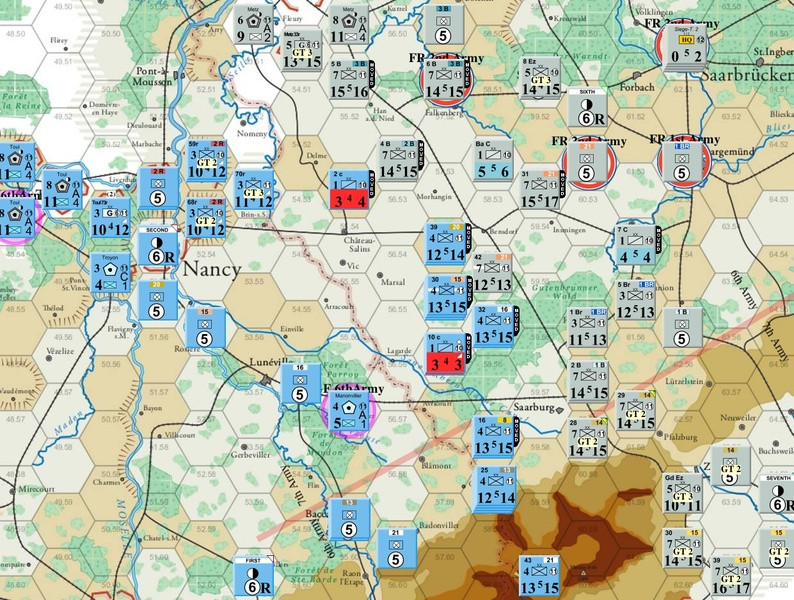 Good luck to your die rolls, virtual or otherwise.