A quiet week at the Mad Padre's wargaming chapel.   Spring is slowly coming, I've been doing some painting, including reorganizing my 15mm Red Army of the Great Patriotic War (more of that anon) and am generally being delighted that Madame Padre is doing so well.

While my GMT 1914 game is still raging at home, at work things are pleasantly quiet and I have found a space in the stockroom to set up a game to tinker with during my lunch hours.   Because it’s April and spring is gloriously here, II chose this 1995 title by The Gamers', April's Harvest, an ACW game on the battle of Shiloh.  It’s a design by Dean Essig, the well-known and distinguished designer behind The Gamers,  and Alan Wambold, part of the Civil War Brigade series now available from Multiman Publishing.  I blame Jon Frietag for telling me about an MMP sale a few years ago.

Most of the books in my ACW library are about the war in the East, and I don’t know much about Shiloh except the rollicking account in the first volume of Shelby Foote’s Civil War series, so it’s an opportunity for me to learn a little more about this battle that started the Confederacy’s long slow death spiral in the West.

Here’s the game set up and ready to go.   The Confederate army is marching on in the top left corner, and the Union are the blue counters scattered around in the centre.  Because U.S. Grant let the Confederates assemble right next to his encampment at Pittsburg landing, without being too bothered by reports of trouble coming, most of the Union troops start immobile and off guard.  Each counter represents a brigade, a battery, a cavalry unit, a commander or a supply train. 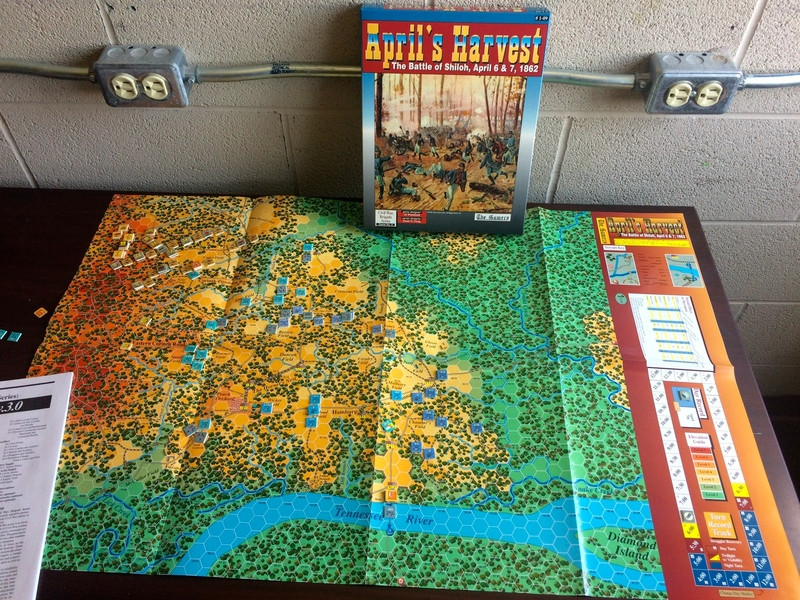 I am still working my way through the rules, which are generally well written and moderately complex.   One of the things that appeals to me as a miniatures gamer is the command and control dimension of the game.   As I understand it, divisions and corps need orders (seize this, defend that, go here, etc) that can need to be written in broad terms by the players.   It’s not at the micro detail of hex by hex movement, but broad strokes.  For example, the three CSA divisions that start on the board all have territorial objectives that they are ordered to capture.   If new orders need to be given, there is a mechanism that marks the time necessary for the orders to travel from commander to subordinate, and then a mechanism to see if they orders are accepted and understood.

I’ve just had time to run the first turn (6:30am).  It wasn’t clear to me which side went first, so I let the Union go first and moved the two Union brigades that had orders.   Since then I have had access to the errata, and discovered that the rebs should go first.  Ooops.  Here Moore’s troops of Prentis’ Division have been ordered to scout for rebel tools.  They run right into Hardee’s third corps and are falling back.  Both sides have fired shots and taken casualties, with a rebel brigade pushing the Yanks back but becoming Shaken after a failed morale check.  Shaken is not a terrible thing, but it does stop troops from making Close Combat (shock) attacks.

The counters on either side of Confederate units showing red arrows indicate that the brigade has adopted an extended line formation. 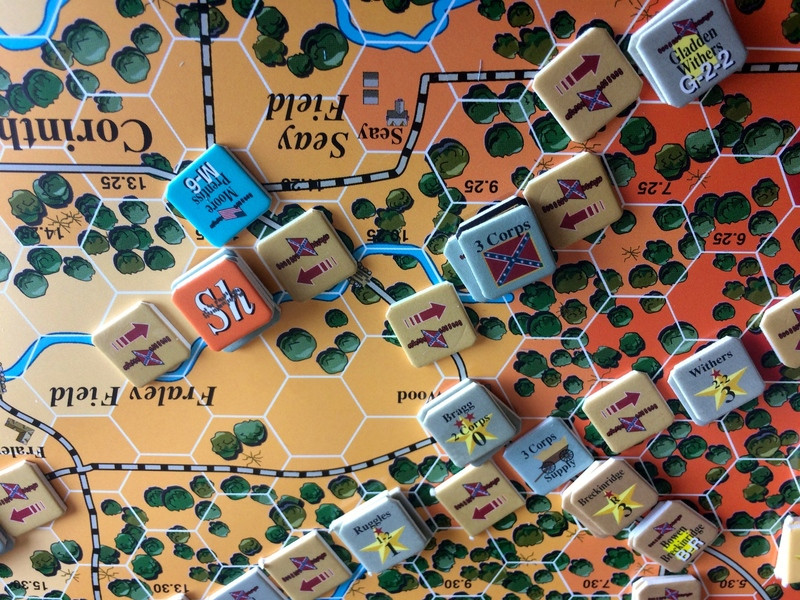 More to follow as the Union camp starts to wake up.

Blessings to your hardtack and coffee!