MINAS TIRITH, MIDDLE EARTH PRESS SERVICE:  After accusations from the White Council that Gondor has gotten lax and fallen behind on its security, the Office of the Steward announced that the Gondorian army has been increased.   Said Denethor, Steward of Gondor, “Our new rapid deployment force will allow us protect our borders and keep the people of Gondor safe.  Our troops are the best.  Not that Sauron is a bad guy.  I don’t know Sauron, but I am sure that if he and I got together, we could do some deals together."

Twelve new troops for my Gondorian force.   These are of course the classic GW plastic sculpts as per the Peter Jackson films.  They are figures that Chris Stoesen sent to me at Christmas as part of the Santa Clause project.  Thank you, Chris, great gift! 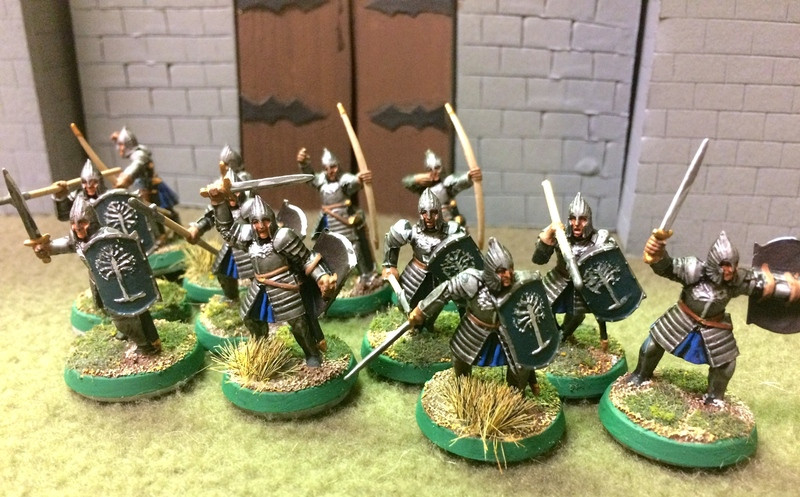 Also finished are these eight figures from the GW Warriors of the First Age sprue.   You get four per sprue and I had two sprues, so …   I think they could pass for palace guards or some sort of ceremonial or elite unit.

They have comfy blue cloaks.  Definitely an elite unit.

Then, just to have a bit of a gloat, I put all of my Gondorian figures together for a group shot and was pleasantly surprised.  Almost fifty figures in all, and this force has never fought together on the tabletop before.  Shall have to fix that.

Gondorian archers.  My take on them would be that they are the best archers of the race of Men, second only to the elves.  Other races of Men, like the Rohirrim, use shorter bows suitable for mounted work.    So, for example, in Dragon Rampant I would give Gondor 18” missile range and allow the sharpshooter upgrade as well as an upgrade to their armour from 2 to 3 on the grounds that they walk around inside tin cans.  Of course, that would be an expensive unit to field. 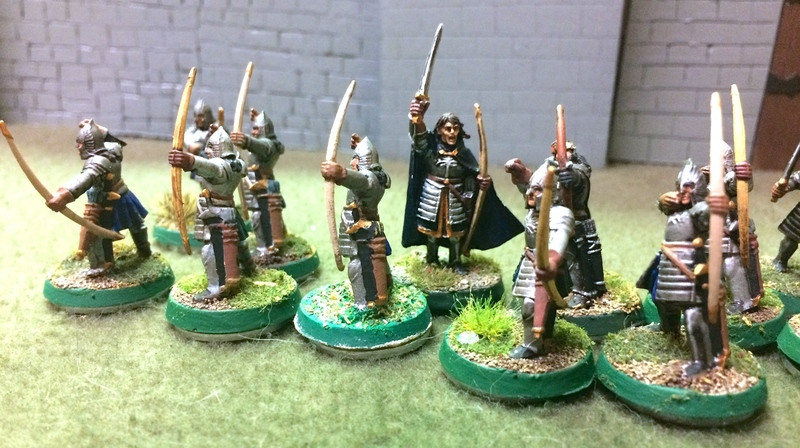 “Men of Gondor …” sung to the tune of Men of Harlech.   Inspiring lot, and very shiny.

Thank you and blessings to your sharp swords of Men.