It has been very quiet here and I am breaking radio silence to ask your prayers / good wishes / positive vibes for Madame Padre.

Longtime readers will know that she was diagnosed with ovarian cancer last May and underwent chemotherapy through the fall and early winter.   She had some good months but sad to say her cancer has returned in an aggressive way.   Those of you who follow me on Twitter (@madpadre1) will already know some of this.  The cancer blocked her stomach, causing much damage to her bowel. Suffice it to say that Kay has undergone two major surgeries in the last week, and has been in hospital for the last fourteen days.    It will be a while before she is strong enough to undergo chemotherapy.  Fortunately, Madame’s spirit and kooky sense of humour remain undaunted, as you can see below, when she declared herself ready for tango lessons. 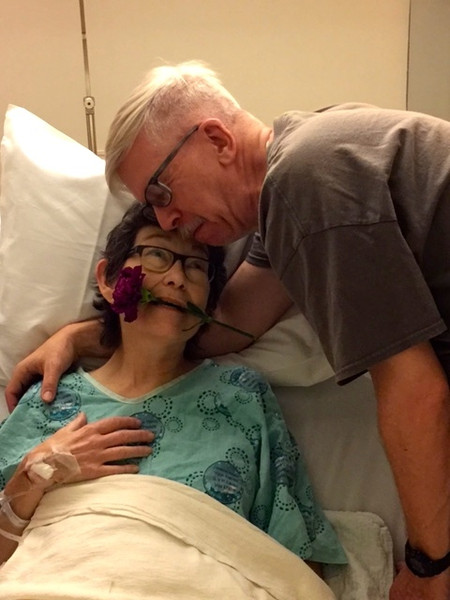 I am finding it hard to concentrate on much else, and have just bade farewell to Madame’s US family, who descended on the house this week and were absolutely marvellous, treating me to American Thanksgiving dinner. Today they headed back south to Dixie, leaving me with a massive smoked turkey.  Y’all come by for some.

So my girl is in for a hard fight, but we are ready.  The colours are unfurled, the battle line is braced with bayonets fixed and drums beating, and we are asking and giving no quarter.   The foe is fell and fierce, but his hard blows and malice will be returned in kind.  Hearts shall burn bright and not falter, ere the darkness fall.

If you would be so kind as to leave a message of encouragement, I will read it to her during my next visits.  Even the words, prayers and good wishes of strangers encourage her greatly, and she knows I have a great cloud of wargaming witnesses out there.

Blessings to your loved ones.  Be good to them.