A Ridiculous Amount of Russians

The chance to buy a friend’s collection of 15mm WW2 Soviets last Thursday has allowed me to go from fielding a couple of platoons to … well, to a horde, basically, or good enough for a horde on most tables.  I’m not sure what the NATO military symbol for a horde would be ...

A mass of riflemen, forty bases, or six full platoons and 2/3rds of a seventh.  That plus what I’ve got would allow me to field a full infantry battalion.  All quite well painted and based, ready to go on the tabletop. 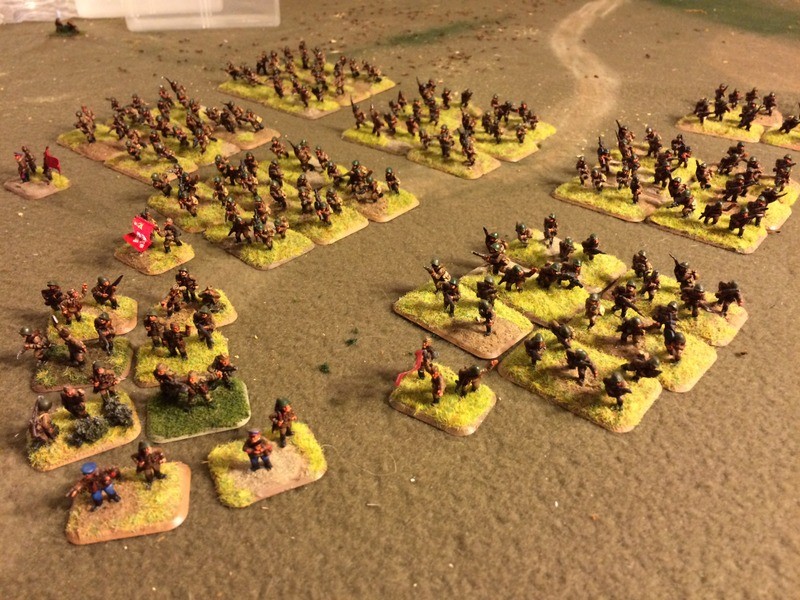 Lots of command stands including these grim-faced NKVD types to keep the dialectic of history advancing in the right direction. 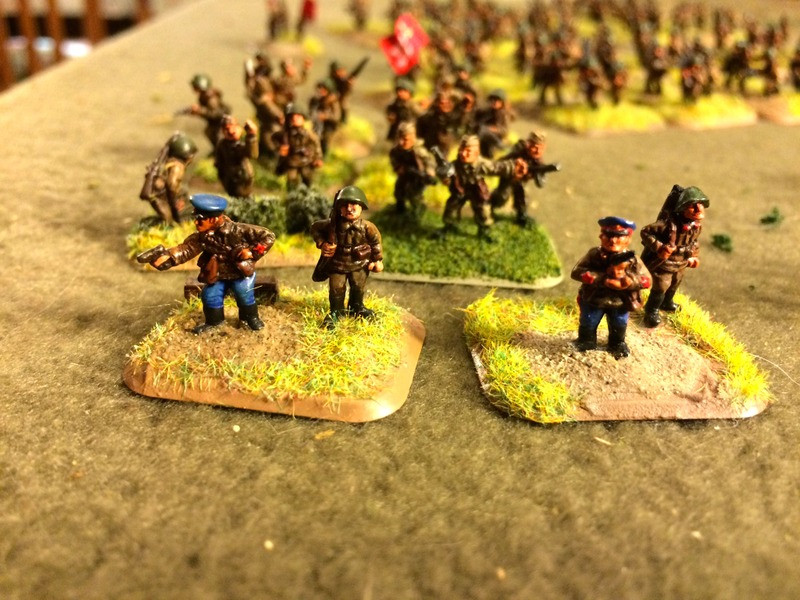 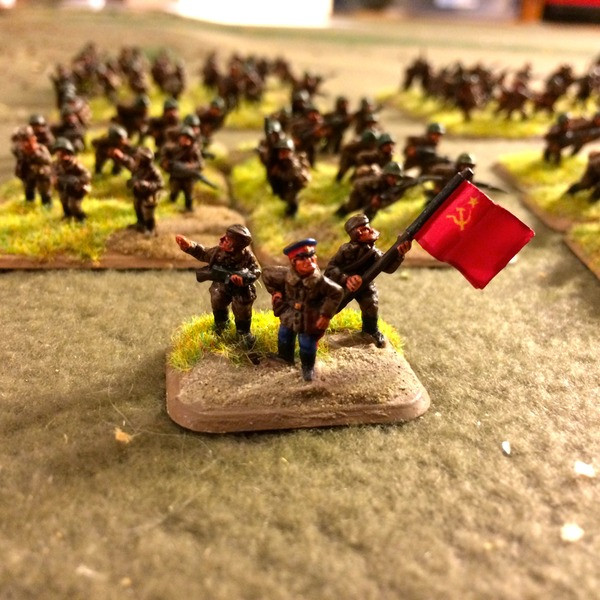 Heavy machine guns.  Six stands of Maxims, plus one out of the shot for repairs and I think another three in the carrying cases that came with the deal.   Let the fascists try to breach our lines with these death-spitters ready to support our glorious infantry. 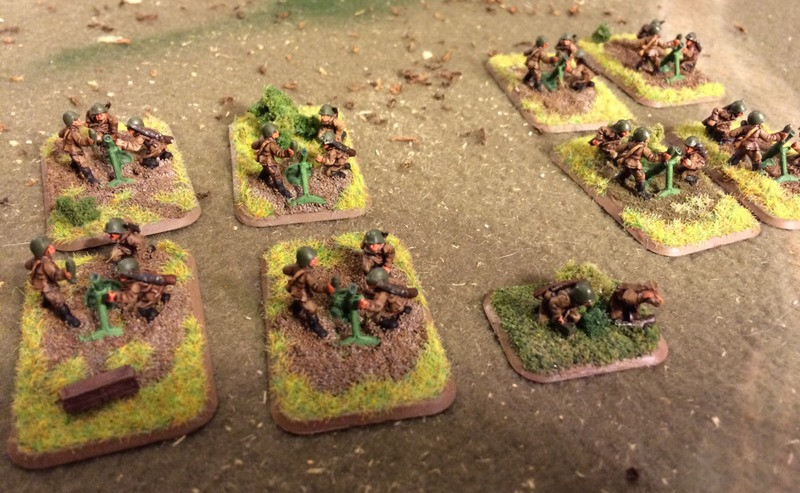 And at least one stand to represent Forward Observers. 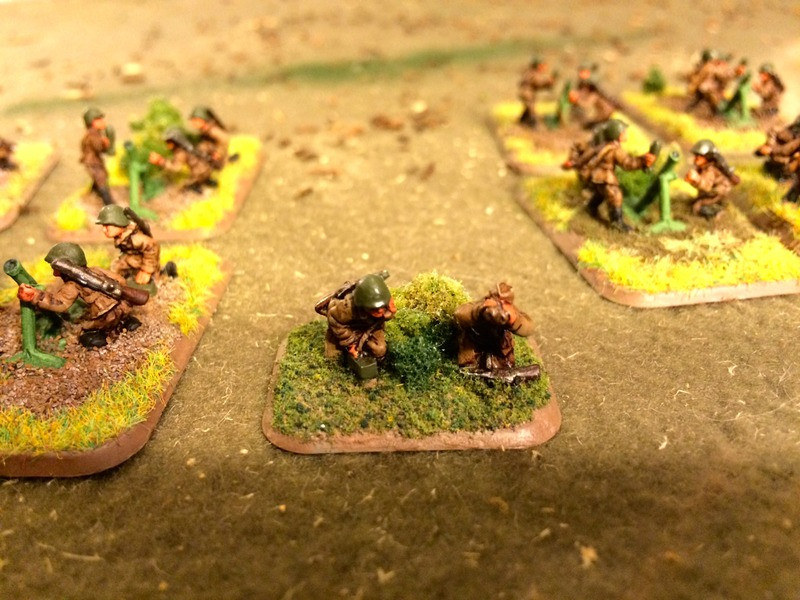 Six stands of 120mm mortars.  Not sure if these would ever be on a table, since that would normally count as off board artillery, but fun to have in one’s back pocket. Either an artillery command post or a regimental HQ. And four of their bigger brothers, a nasty surprise for Fritz tanks! Not sure what calibre of guns these are, but again, I’d normally expect to have them off-table. … and engineers, ready to make things hot for Frtiz. Of course there will be tanks.  A nice selection of earlier war kit here. My Soviet tank recognition skills are fairly minimal.   Three T-40s, I’m guessing?  Another chap with a flag, excellent.  If it was Warhammer, he’d have a sword instead of a flag.  And his tank would be a lot bigger. T30s?  I’m not sure.  I’m fairly certain they blow up when the Germans look at them. Here’s something cool.  Five BA-10 armoured cars.   Since lots of these were captured during Barbarossa, it might be fun to paint one of these as a Jerry tank for behind the lines scenarios against partisans.  Nice to have some recce capability. More T26s with variant turrets?  Assuming these turrets belong with these guys. OK, these guys I know.   With my existing PSC models, these will allow me to field fifteen early model T34s.     The models shown here are all metal castings.  After getting used to the plastic version of a model, it’s surprising to feel that weight in the hand again. And their lighter cousins, four SU-76 SP guns to go in with the assaulting infantry. And some oddballs, just because.  A T-28 which looks like it would be more at home in an All Quiet on the Martian Front.  This has to go on the table in early war game, because so tanky. And finally, do not open until assaulting Berlin, an SU-152 assault gun. There’s a lot more that came in the deal, including many unpainted figures, mostly by Command Decision, more hordes of riflemen and a LOT of SMG armed troops, which will eventually give me at least an SMG company.  There are numerous trucks, oddly all captured German kit including some tracked versions of the Opel Blitz, a trio of White scout cars, and one of the most endearingly useless of tanks, the T35 “land battleship”, a giant in three big hunks of lead and four turrets.

There’s a lot of repainting and finishing work for the tanks, but it’s a welcome luxury to be able to act and grab a collection of this size, rather than take years trying to amass enough toys in small purchases.  I couldn’t have afforded a fraction of this stuff if priced retail, so this was a huge bargain.  It also gives me a respectable Soviet force to throw at my friend James’ substantial Kampfgruppe of early and mod war German kit.