Back to Blucher: Trouble Along The Pukenbruch

-0Last night I tried my second game of Blucher, only this time, instead of playing it solo, I took it to the lads in our group.  Marshall Patrick took the French, while James and Mike spilt the Austrians and I helped everyone through it, though sadly, as noted below, made some mistakes.

We used the random terrain setup from the basic rules, with each side having a dozen terrain choices.    For some reason the chaps decided to put a stream in the middle of the table, forcing us to play from end to end.   I chose the armies since we didn’t want to waste time explaining the army builder rules.  I rolled a random spread of numbers, giving the Austrians a small advantage, 300 points to the French 260, or 22 Austrian units to the French 19.  The Austrians had three corps of infantry (one grenadier, one line, one mostly conscript), a corps of heavy cavalry, and four unattached units of hussars.  The French had two corps of infantry (elite and line mixed), a corps of heavy cavalry, and a corps of light cavalry.

All corps entered the game on blinds.   I adapted the recon rules from the Scharnhorst campaign rules at the back of the Blucher book, allowing both sides to choose how many light cavalry brigades they will allot to pre game recon.  The Austrians put 4 to the French 2, for which I allowed them to spot two French blinds.  One was the infantry corps at the top left of this photo, the other was a dummy.  In retrospect it would have been more interesting if I had allowed the Austrians to use this advantage to try and bring one or two corps onto another table edge to represent a grand flanking manoeuvre.Austrian objectives are the two hills shown on the left side of the river, which was christened the Pukenbruch.  The towns on either side of the river were Fahrtompuken (right) and Neuefahrtompuken (left) and the key hills behind were the Klompenbergen.  Yes, we are easily amused in our little gaming circle. 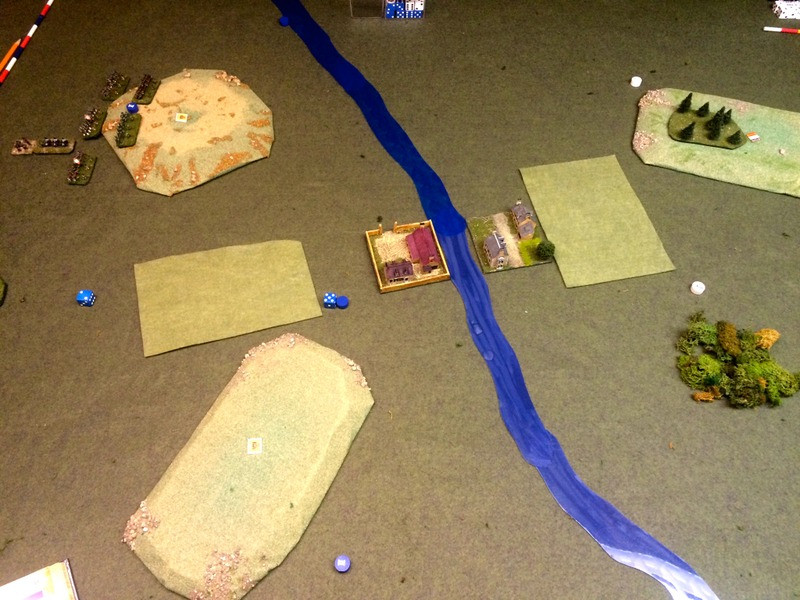 We took units off blinds when they came within 8 Base Widths of enemy.  Here the French heavy cavalry (three brigades of dragoons, two of cuirassier, with horse artillery) face off against the Austrian grenadier corps (four brigades of grenadiers and heavy artillery).   The river was fordable but difficult terrain, and would prove a hard barrier for the Austrians to cross in the face of opposition.  I chose to put the artillery into units rather than parcelling it out among the brigades, to give the players a sense of how artillery works. 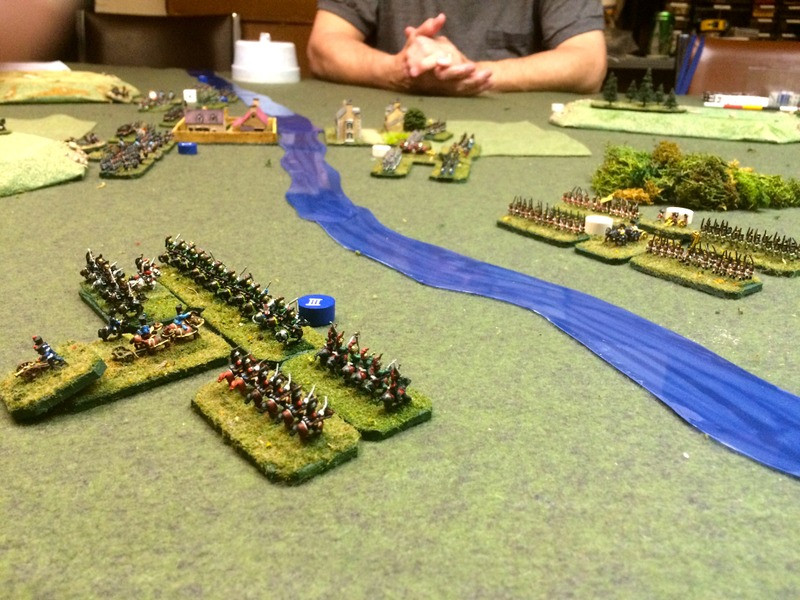 Opposing infantry corps square off in the centre, each putting one brigade into respective halves of the town as garrisons.   Not much happened on this front.   One of the French brigades got chewed on by artillery but both sides made their main efforts on the flank.  At the top you can see Patrick’s hussars and infantry crossing the stream to fight the Austrian conscripts, who would give a surprisingly good account of themselves. 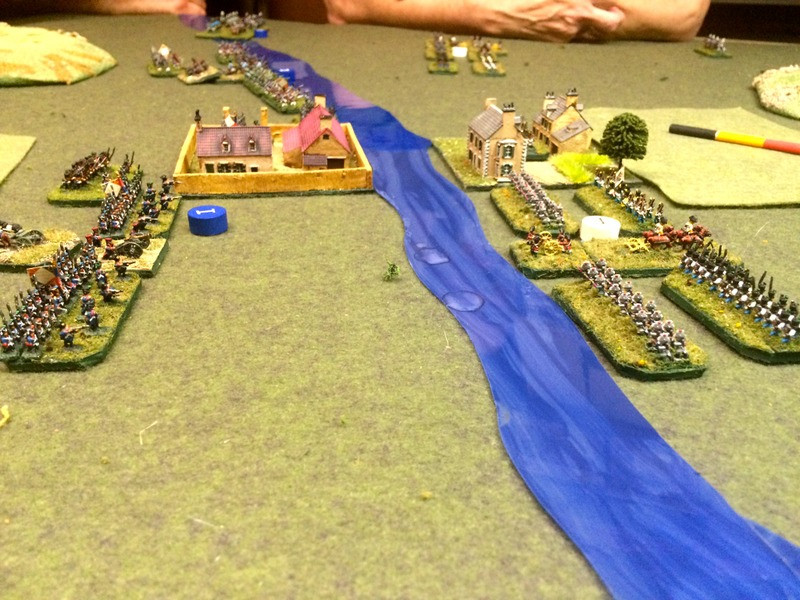 A furball at the bottom of the table, as Patrick’s heavy cavalry kept pushing the grenadiers back across the river.   Since they were crossing the stream they were unable to go into square (Prepared in Blucher terms) and would be at a significant disadvantage in combat with the French horse. 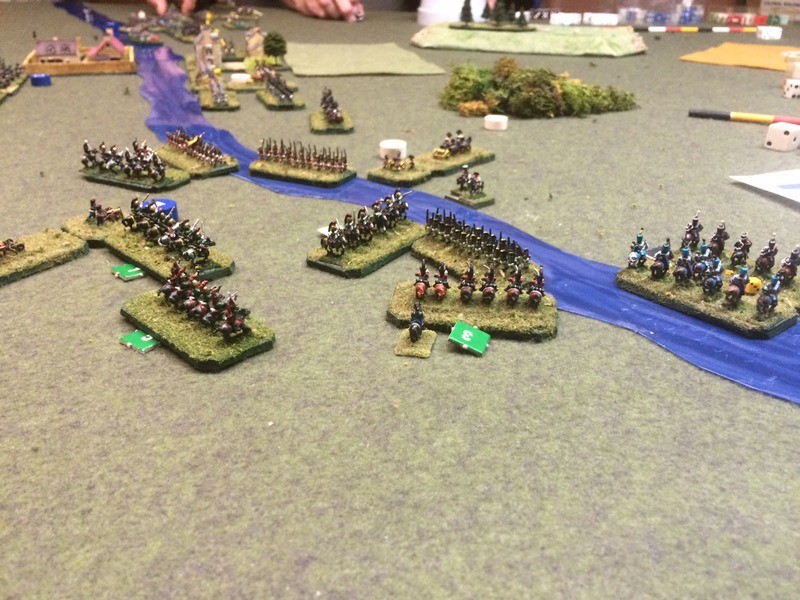 The final battle.   The Austrian heavy cavalry corps push across the stream, and the French heavy horse are too depleted to oppose them as the Grenadiers continue to batter them.   By this point it was after midnight and we were on the last Austrian turn.  Hey, look at those sexy measuring sticks! 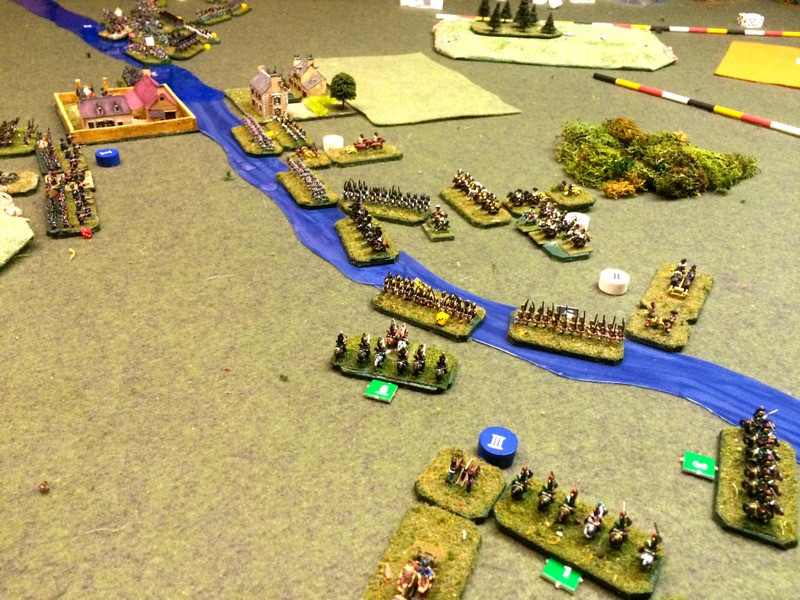 We declared the game a French victory, but that may have been an injustice to the Austrians.  After checking the rules and the Blucher rules section of the Honour Forum, which is an excellent resource, I found five rules that we were not using properly.

1) All infantry units can employ skirmish fire.  Units with the skirmish trait just do it better (getting the count one 5 as a 6 bonus).  Unfortunately, we weren’t allowing the Austrian line and grenadier units to use skirmish fire.   Only two units in the Austrian list, Veteran Grenz and Avant-Garde Brigade (a mix of light artillery, infantry, grenz and cavalry) have the Skirmish trait, but all Austrian infantry units can use skirmish fire (dice = 1/2 of élan rounded up) at 2 BWs.
2) Any attacking unit that loses a melee combat to a defending unit that does not break loses 2 fatigues (meaning it drops 2 élan levels).  We were playing it last night that attackers which lose a melee and have to retreat only lost 1 fatigue.   This would have been true in the event of a tie, but not if the attacker loses.   Both players actually benefitted from this misunderstanding, though it may have worked to the French advantage in that their heavy cavalry were pushed back several times by the Austrian grenadiers but took fewer fatigues than they should have.
3) Infantry in combat with cavalry NEVER retreat, provided the infantry does not break.  Sam’s rationale for this is as follows: “Infantry either holds, or it dies.  But it doesn’t retreat or fall back in good order after being charged by cavalry, because that would be an invitation to be slaughtered.” http://www.sammustafa.com/honour-forums/rules-questions-32/infantry-vs-cavalry-no-retreat/?PHPSESSID=9b289e8d65980185091a4320c3bb2cc0  This misunderstanding probably worked more against the Austrians last night.
4) In the comments on my last Blucher post here, I got some terrific advice on how to handle the MO dice when playing solo.  I confess though I hadn’t really thought it through when we were playing face to face.  What developed during our game was a dynamic where the Active players were asking the Passive player if they still had MOs left to move certain units.  That was wrong.  I hadn’t realized that it is permissible to move more units than you have unit MOs left, but that ends your turn.  So, say the Active player activates a Corps with 6 MOs.  After this move, he only has 2 MOs left.   The Active player then wants to activate another Corps with 5 MOs. He CAN do this, but that’s it. The Passive player would note that he only has two MOs left, and allow the Active player to move his corps with 5 MOs, but then he would lift the cup and say, “you’re done”.  This means that the Passive player NEVER tells the Active player how many MOs are left.   Provided that the Active player has even 1 MO left, he can activate a Corps of any size or activate an individual unit, but upon finishing either of those Moves, he is told by the Passive player that he is done.   I was wondering why this process was proving so difficult, resulting in several partial Corps activations, and this explains why.  This error no doubt hurt the Austrians more since they were the attacker.  I apologize to those who tried to explain this to me in comments to a previous post here.  I’m a bit of a thick sometimes.
5) Finally, here’s a use for the CinC that didn’t occur to me to tell the players.  The CinC can move ANY friendly units within 2BWs of his stand REGARDLESS of how many MOs the active player as left.  However, once the CinC moves these units, the Active Player’s turn ends, EVEN IF the active player still has MOs left.  So, using the CinC figure is a bit of an insurance policy if you think that you might not have enough MOs left to accomplish your goals.
Even with these errors we had a good game played to a conclusion, and I think everyone felt that Blucher has a lot of promise.  My chum James has already posted his thoughts on last night here.  With two games under my belt, I think I understand the basics pretty well, and see tons of potential.   Hopefully soon we can try the Scharnhorst campaign system, on one of the campaign maps available here, and then graduating to a larger project I am just starting to pencil out.
That’s all for now.  Blessings to your die rolls, mes braves!
MP+
Posted by Mad Padre at 7:37 PM