A very happy Easter to all.  I hope this weekend was restful and pleasant to you all, and holy for those who needed it to be so.

Here’s the state of the Padre’s painting desk this weekend.   I’ve been cracking on with my 6mm Napoleonics project lately, and finally have enough French and Austrians based that this coming week I can dive into the Sam Mustafa Blucher rules and give them a test drive.   However, I am woefully short of scenery, and I’ve pushed this project to the front of the queue.  The church is a Timecast model, and quite a lovely one too.  The other buildings are GHQ, purchased at the Hot Lead bring and buy a year ago.   My plan is to get them onto some scenic bases that can also accommodate a stand of infantry figures to represent a village being held by one side or the other.  Hopefully I’ll have them finished and pictures up later this week. 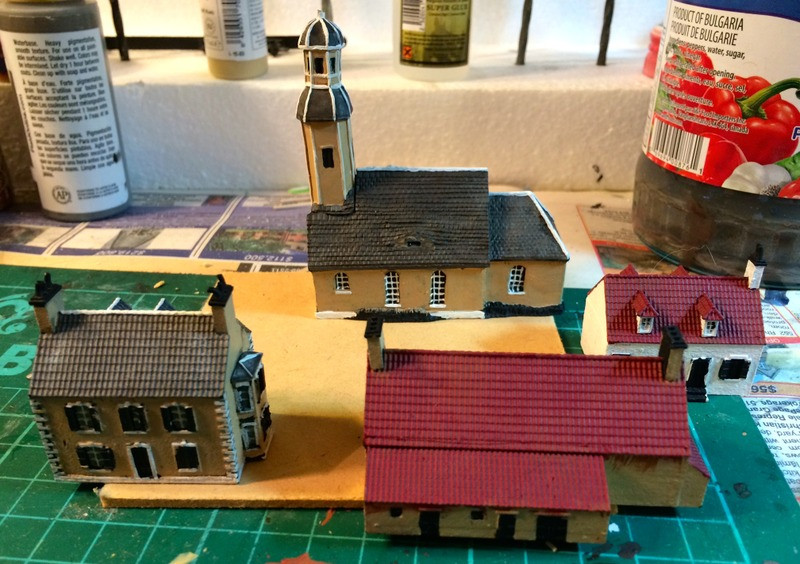 Speaking of Sam Mustafa, Friday I had James M over for Indian takeout and a Civli War bash using the Longstreet rules.  Poor fellow needed a rest after organizing another triumphant Hot Lead, and I figured that in his fatigued state I might get a win in. We were going to try Blucher but James noted my look of perplexity when reading the unfamiliar second half of the rules book, about army lists and so forth, and so we decided that we would try Longstreet instead, which I know fairly well now.

The Battle of Bloody Creek centred on this little ford.  Two symmetrical brigades, each of three seven base infantry regiments, three bases of artillery (2 six pounders and 1 howitzer) and a seven base cavalry regiment, met to determine ownership of the ford, and the resulting struggle gave the name Bloody Ford, by which locals still remember the action.  We rolled randomly for the year, and got a battle in 1861, so all units were classed as Eager Recruit.  My Texans and Mississippi boys under Colonel Eusebius (Seb) M. Letchworth were looking forward to their first battle of the war, having never seen the elephant.

Here James’ Wisconsin volunteers charge across the ford and put my Texans to flight.  Fortunately I had a regiment of Mississippians ready to counter-charge.   Two lessons from this episode.  One, in Longstreet, Eager units always have an advantage in melee combat so charge with them when you can, even when they’re recruits, and two, reserves are always useful. 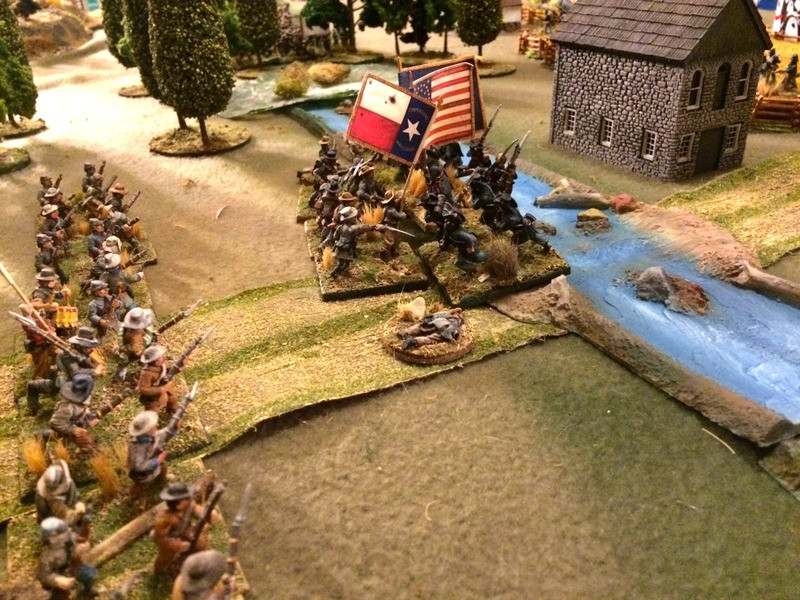 My suspicions of Longstreet were well founded, it is more fun than a camp full of drunken Zouaves when played with a real live opponent.  The cards provide quite a few tense moments and a few enjoyable opportunities to play dirty tricks on your opponent, like the time I rashly pushed my infantry forward into canister range and James played a card giving his three base battery an extra die each, making for a nerve racking nine dice in the roll to hit.  Very exciting stuff, and yet the cards, while they seem gimmicky, do a good job of simulating the vagaries of ACW combat.

Here James’ commander points in alarm as my third regiment rushes forward in column, trying to get on his flank.  This was a risky move, as James was about to hit my column with his two uncommitted units, a cavalry and infantry regiment, but I had the satisfaction of shutting him down with the dreaded Pinkerton Intelligence interrupt card, which basically casts a hesitate spell on the Union when they declare a Combat (charge as opposed to movement) round.  Now some will say that this is overly gimmicky, the equivalent of magic, and that’s fine, but in Sam M’s defence the card is only given to the Rebel player in 1861 and 1862 scenarios, and if he is lucky enough to draw it he can only play it once per game, so you could say that this is a little bit of friction which models the indecisiveness and inexperience of many early war Union armies.  In later scenarios the cards available to the Union player become more plentiful and more effective than those given to the Rebel player, so it is an effective way of modelling the shifting qualities of the armies during the course of the war. 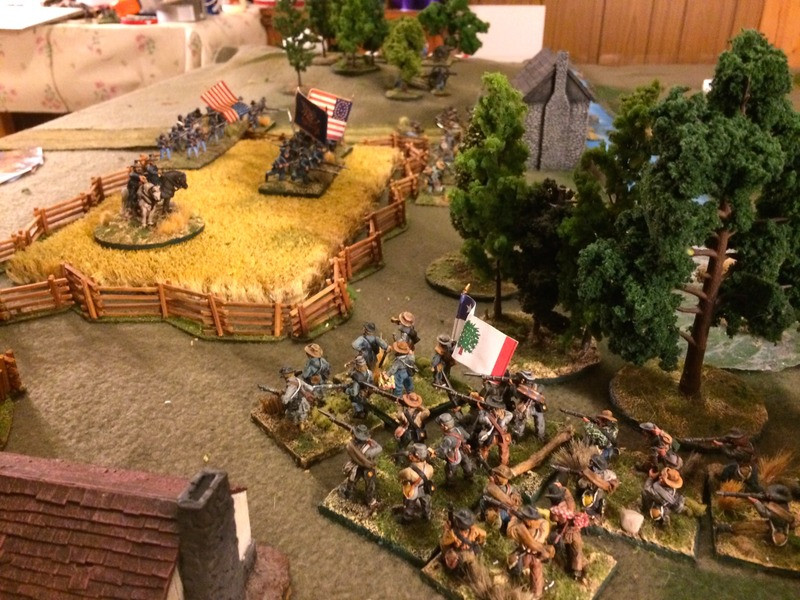 One of the things some people might not like about Longstreet is that command figures are essentially immortal and quite irrelevant to the battle.   All the command and control aspects are modelled in the cards.   Some commanders have personality attributes which can influence play (allowing re-rolls on to hit dice, for example) and there is a risk in using these attributes, in that it can lead to “wounds” which reduce the number of cards a player can hold in his hand during the game.   Having your hand reduced by even one card to a maximum of only three cards in the hand for multiple wounds when your opponent has six cards in his hand would be quite disastrous and quickly lead to a defeat.

James put up a cracking good bat rep here, complete with a photo of yours truly gloating.  He says it was gloating, I say it’s proof that these rules are cracking good fun.  The Union side was forced to retreat, leaving the Confederates in control of the now renamed Bloody Creek.   We both went through the post-game steps of the Longstreet Campaign Rules, figuring out how many troops came back to the colours after the battle, how many died of flux in camp later on, and what reinforcements we acquired.  Both of us did well in different ways.  Both of us got an Epic Point for showing up, I got one for winning, and we awarded me a third for two successive successful charges by my Mississipians.  Seb Letchworth got promoted after the battle, which is really only useful for bragging rights.   In the reinforcement stage, James got a fourth regiment, I got a fourth artillery base, and we now have a variety of unit sizes and experience levels in our commands, so you may see a re-match at some point.

Wishing you all a good week, with blessings to your brushes and die rolls!