I Broke the Guard: And Other Hot Lead Experiences

I’m back from a very pleasant Friday night and Saturday at Hot Lead, Ontario's premiere gaming convention.  For all I know it may be among the biggest miniatures conventions in Canada, but I’m not qualified to speak on that.  From what my friend and HotLead kingpin James Manto told me on Saturday, the numbers in attendance were high and the vendors all seemed to be satisfied.  Games from north and east of Toronto, and from as far south as Michigan make the trek to Stratford for this early spring event. The Bring and Buy, always a favourite at Hot Lead, was a swirling mass of greed and pillaging when it opened on Saturday at 09:30.  The Bring and Buy tables were crowded three deep and I didn’t get close to them until they were picked fairly clean.

It was hard to see a theme or a trend in the games on display this year.  Fantasy SF games seemed very popular, from skirmishes featuring Colonial Marines vs Aliens (from the movie series) to Battletech to Star Trek and Star Wars themed games.   Ancients were well represented, as were Napoleonics, both on land and age of sail.   World War One games were fairly plentiful as well, perhaps because of the centennial.   Vietnam seemed more popular than WW2 - I saw a Bolt Action game but Flames of War was conspicuously absent.  In fact, I noticed a LOT of Battlefront FOW kits and figures remaining in the Bring and Buy hours after it had been combed through, suggesting that FOW’s day may have come and gone.    I didn’t see a single American Civil War land game, though there were several ACW naval games.  That’s my take on wargaming trends as I see them, for what it’s worth.  You can get a great overview of the games from this blog post by James Rabbitman Manto, who deserves an OBE and stiff drink for putting this all together.

Friday night I got a seat in a pickup game of In Her Majesty’s Name run by my friend Barry.  Five different factions (Turks, Brits,French, and two Arab trades) converged on a village where a sheik was hoping to sell a prisoner, a European lady (of course), to the highest bidder, in story vaguely reminiscent of The Wind and the Lion.   Here the different factions converge on the village.  The sheik and his men held the lady on the roof of the mosque, the long building on the right.  The only way to get her was to go up the stairs and take on the sheik and his men. 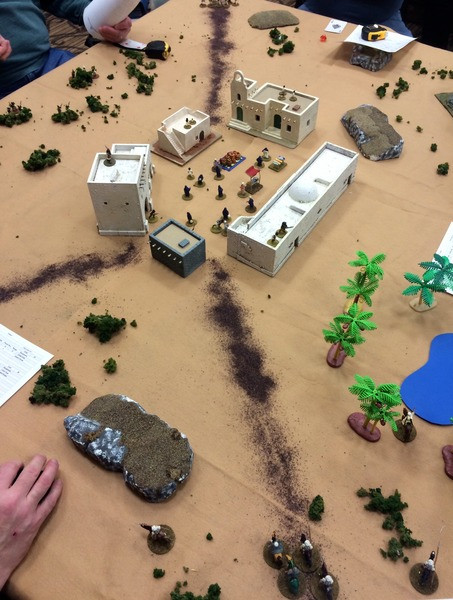 My Arab cavalry head towards the mosque.  Their holy man had some spells that proved useful, but weren’t enough to get up the stairs.   My experience of this kind of all vs all games is that the side which hangs back and lets the blood flow is generally the winner.  Despite my offer to make to invite the Sheikh to my wedding as my honorary father in law and to give him a handsome dowry for the European lady, we could not strike a deal.  I thought I could force the mosque, get the girl, and escape on my horses before the others stopped killing each other.  I was close, but not close enough.  It got quite funny when the Turks and Europeans intruded on an Arab family quarrel.  The Arab players all agreed to ally and fire on the others, though there was still some fraternal treachery going on.

This is the second time I’ve played In Her Majesty’s Name.   I have to say I find it too granular, there are too many dice rolls to achieve limited results, and I find it moves rather slowly.  But it was a fun game. 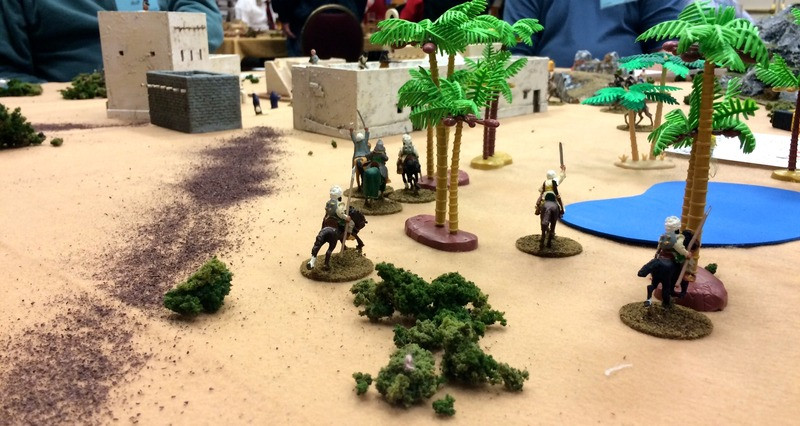 Behind us on Frida this Marines vs Aliens bug hunt was going down and looked rather exciting.  I found the fellow in the uniform a little disconcerting - he had commercially purchased fatigues and a USMC style cap in Canadian pattern camouflage with some space marine badges on it, which was the closest Hot Lead came to cosplay. 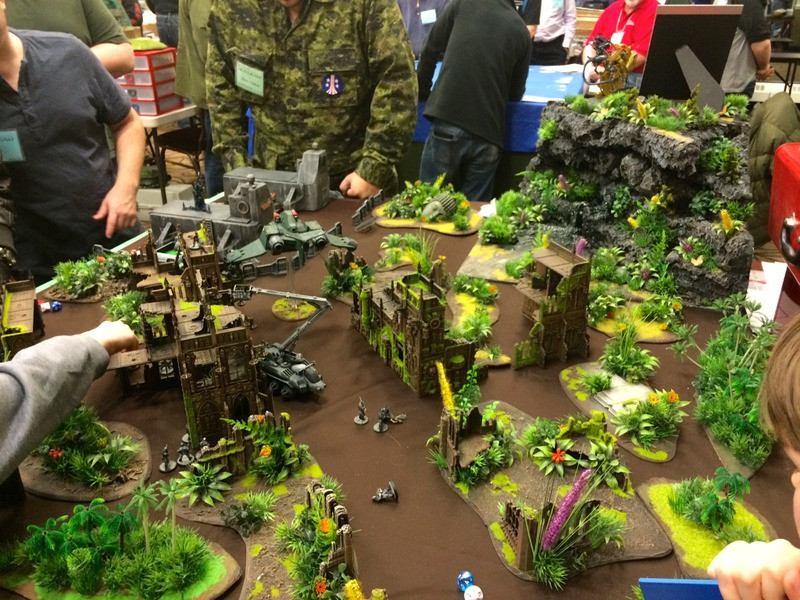 On Saturday my goal was to get into two Napoleonics games.  This is the battle of Bar Sur Aube, which occurred in 1814 as Oudinot’s French tried to halt a large Austrian force invading La Patrie.   I got a brigade of Wurrtemburg infantry, seen at the bottom.  Two other players at my end also got Wurts - the fellow in the blue checked shirt on the left has the other infantry brigade, and there was a cavalry brigade as well.  Our job was to capture the two villages represented by the houses in the centre, and then move up the road and link with the Austrians who were trying to bull their way through at the faaaaaarrrr end of the table.  The figures were well painted 28mm metal, quite lovely, and the rules were Shako 2, which I’d never played before. 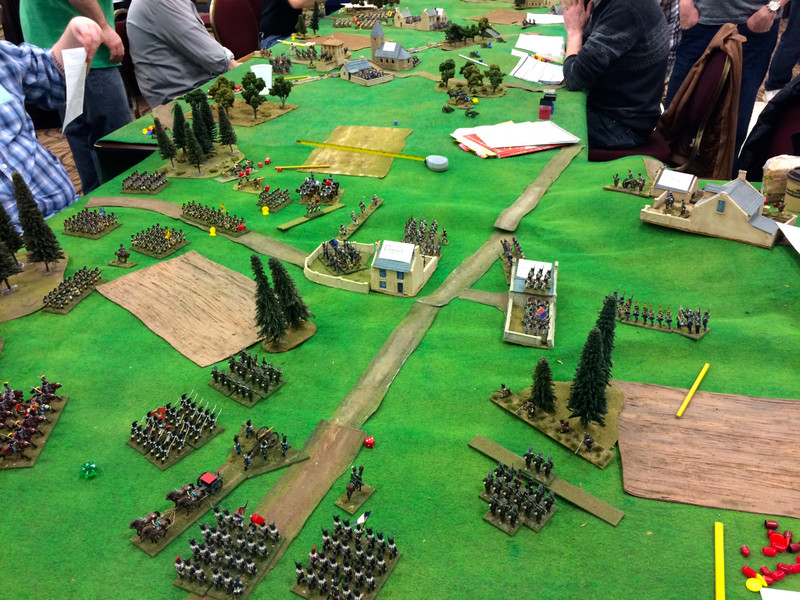 Here elements of the two Wurrtemburg brigades try to assault the villages.   I quickly learned that attacking a village with a weakened unit was suicide. In fact, I found Shako quite bloody.   Units were quite fragile and vaporized quite quickly. 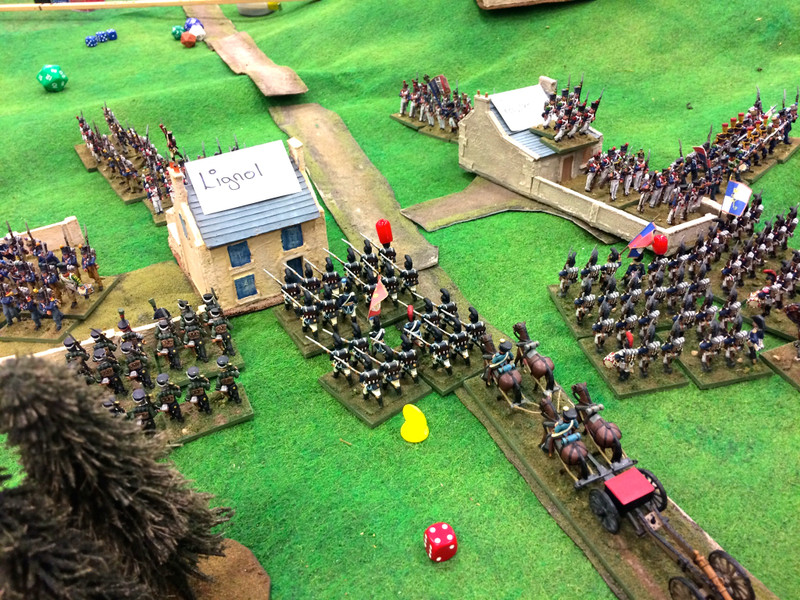 After five hours of play, here’s the end state at my end of the table.  My two co-commanders had given up.  Blue shirt guy had been savaged by long range French artillery and a French light cavalry unit that was luckier than it had any right to be.   That plus several bloody repulses on the villages led to 50% casualties for our infantry.  Finally close range cannister on the villages weakened the defenders and allowed the Germans in, but at the top of the photo you can see three French batteries, two of them heavy, that commanded a lethal field of fire.  The Wurrtemburg cavalry had swung around to the right, a movement that cost much time, and it would have been suicide for it to advance further.   I heard vague rumours of my Austrian allies winning at their end of the table, but I was too tired to really care.  Big games at conventions, with lots of ambient noise, can be a hard slog on the game masters and players, and  while the idea for the game was epic, it may have been unfeasibly large.

I remain undecided about Shako 2.   There didn’t seem to be a any command and control rules, so our leaders appeared to be purely decorative, and as I said, very very bloody. 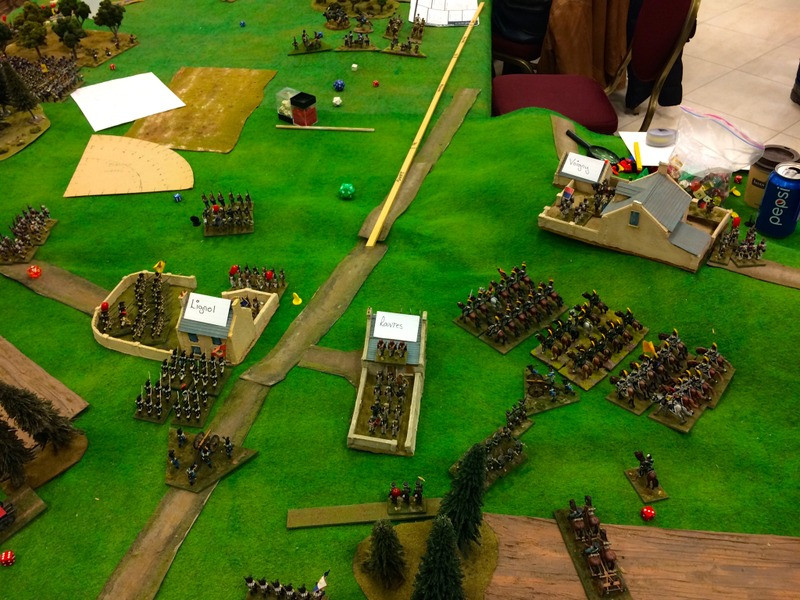 Some other games going on Saturday.  This steampunk skirmish game, hosted by miniatures company RAFM using their figures, had a monstrous airship thingy in the middle of the table. 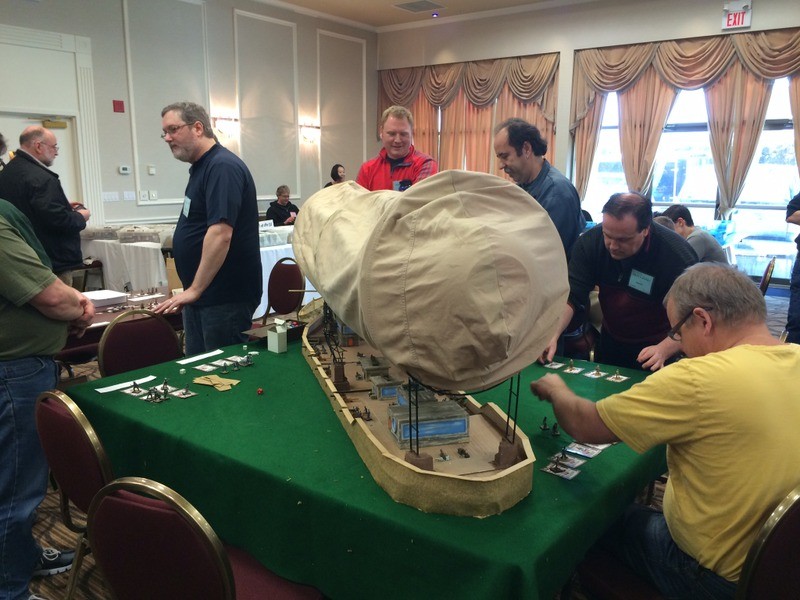 Players had to carefully get at the chaps beneath the gasbag.

A 28mm Belgium 1914 game going on beside my big Napoleonics game. 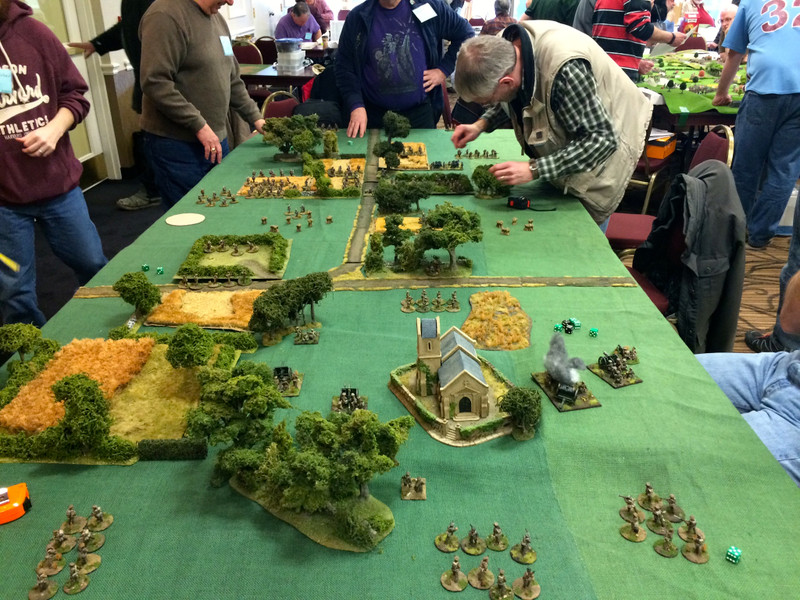 British guns and MG team hold firm beside a church, making it a target- a hard day for the anxious priest, no doubt!

The indefatigable Brian Hall, one of the many talented game masters from the Kent Essex club, ran this lovely looking 6mm Franco-Prussian War game. 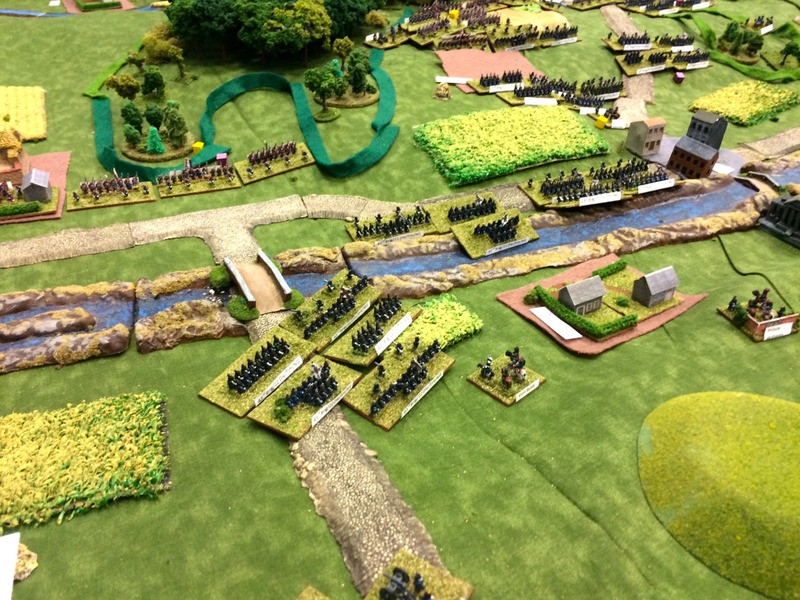 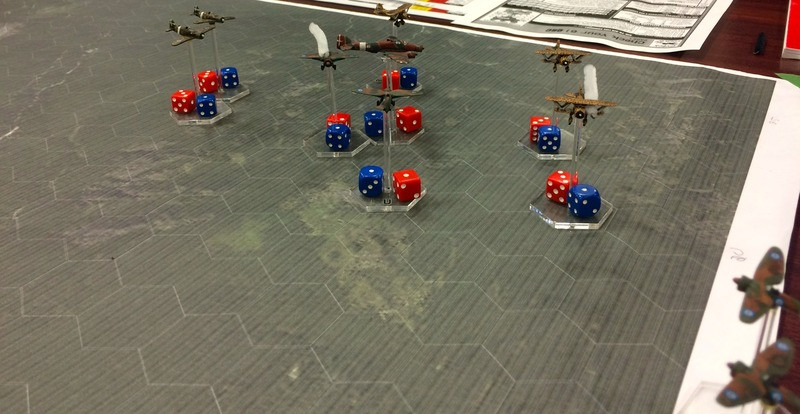 This Star Trek themed game was one of the many SF games there. 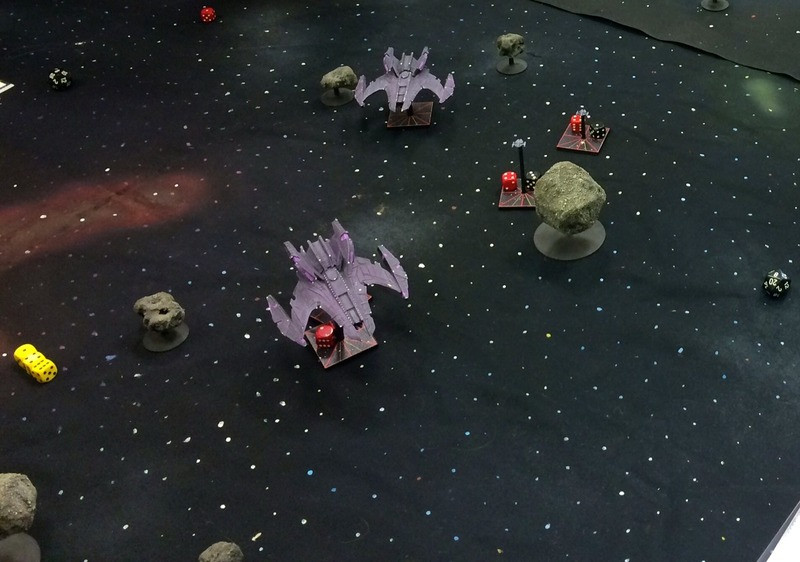 My second Napoleonic game of the day.  Dan Thompson and Kurt Hummitsch ran a Borodino game using their collections of 28mm figures, mostly plastic but no less impressive for that.  Two interesting and contrasting painting styles, Dan’s dark and “grungy” (his word) French, with extensive use of dip and washes, vs Kurt’s bright and light Russians.  Hard to tell which style I liked better.  The rules were the Osprey-pubished Fields of Glory Napoleonics, which I found very different than Shako.   The command and control system seemed similar to Black Powder, with units being allowed extra and complex moves if they rolled certain numbers.  Unlike what I saw of Shako, the placement of generals in FOGN was important.  In another difference, units in FOGN do not take individual hits or figure/stand losses.  Rather, their moral can go from Good to Disordered to Wavering to Broken and back, so the units effectiveness and cohesion as a whole are important.

French  press the attack.  One of the cool things about this game was that the three French players were all named Mike, so we became Left Mike, Centre Mike and Right Mike.  As Right Mike I commanded the Guard, and pushed them far to the right, effectively pinning the Russian cavalry to their start line, while Centre Mike pushed hard with his divisions.   We broke several Russian infantry divisions, but my Young Guard (visible in the forested area below centre right) were Wavering and stubbornly would not rally. 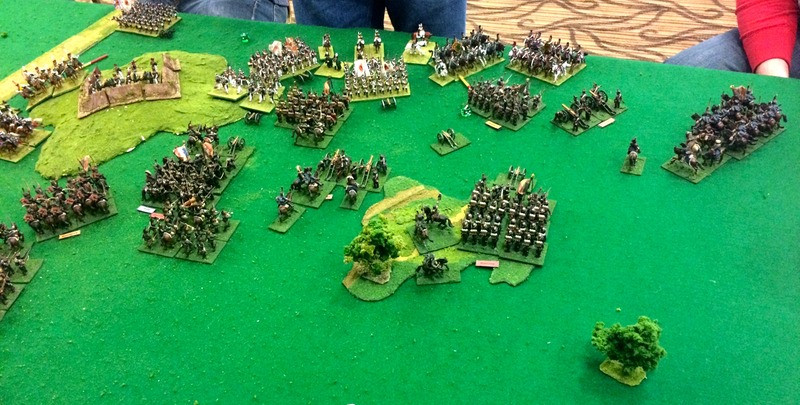 Napoleon goes to the right wing to steady the Guard light cavalry for a key countercharge. 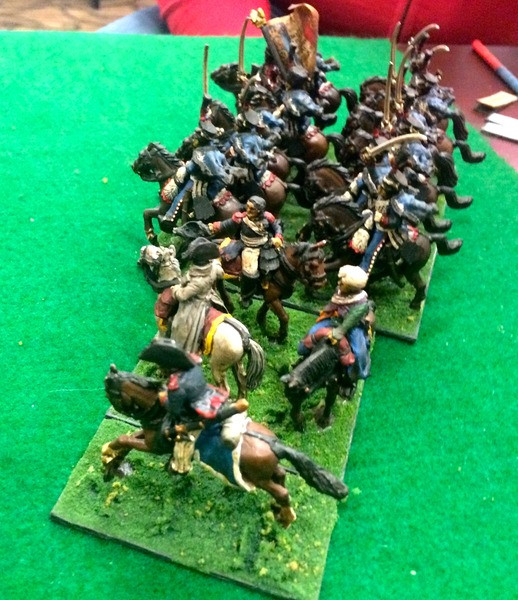 One of the two Russian Dragoon units was wavering with its flank to the Old Guard.   Even though they were Disordered, infantry in these rules can charge wavering cavalry.  Breaking the Dragoons might have unravelled the remaining Russian Left Wing, but the Guard rolled poorly and only pushed the dragoons back.  The other Russian Dragoon division charged the blown Guard in the flank and broke them, routing them back under the eyes of Napoleon himself.  It was bad news for the French Right wing, but the Russians were too battered to resist in the centre, and Left Mike had been heroically making bricks with straw the whole game and had blunted the stronger Russian right wing.  Victory, though I fear Marshall Right Mike will get a convict battalion of refractaires in Sardinia as his next assignment.

So the takeaway for me is as follows.

It’s good after a gaming con to say “I broke the Imperial Guard."

It’s bad to say in the next sentence, “I commanded the Imperial Guard." 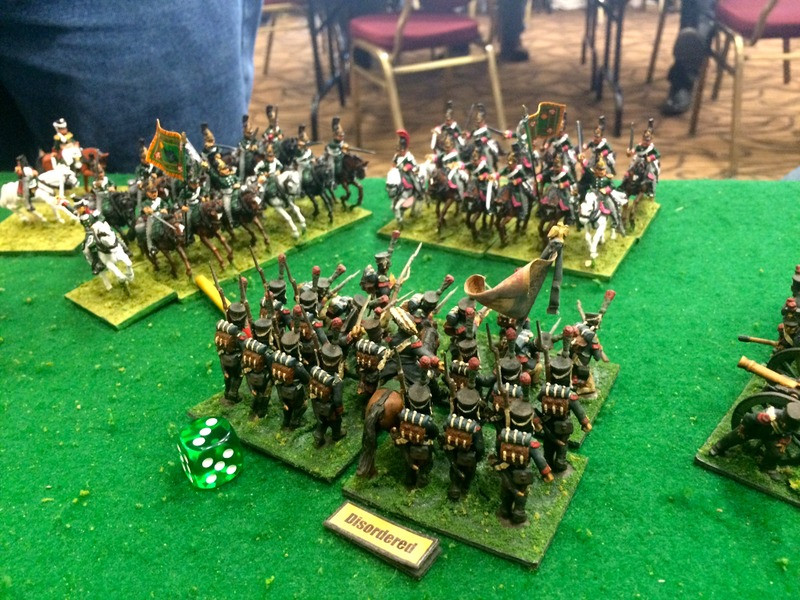 So ended Hotlead 2015, more geeks, dice and glory than you can shake a D6 at.   I did pick up some loot, and more on that in another post.