I’ve been meaning to give Sam Mustafa’s ACW Rules “Longstreet” a try for a while now, so this series of posts will be a kind of initial impressions / review / demo game.

First, it’s a bit of a mystery to me how I gravitate to some rules systems over others.  When I first started playing ACW miniatures in the late 1980s, the group I hooked up with was using John Hill’s Johnny Reb Two, which is what I started to build my own collection on, using JRII base sizes (still follow them today, for consistency’s sake).  I found Johnny Reb a little gamey and somewhat complicated, and didn’t really stick with it over the years, though I dutifully bought his Third Edition.  Too Fat Lardies seemed a logical next point, and I like their rules for larger battles, They Couldn’t Hit an Elephant, and their skirmish rules, Terrible Sharp Sword.   I’m also aware that there are a multitude of other rules out there, and it seems to me that Regimental Fire and Fury is a popular title.  I believe Hill has come out with a new title, Across a Deadly Field, which seems well supported with scenario books.  However, I ended up deciding on Sam Mustafa’s Longsteet. Other than the fact that I liked his SYW rules, Maurice, I have no explanation for why I ended up here.

The first thing that might put some off Longstreet is that it is card driven.   I like card driven rules myself, and find them eminently suited for solo play, which I do a lot, but not everyone likes them.  The second thing that might deter people is that to play Longstreet, you need two decks of cards, one for each player, so it could be $60 before you can get started.   however, the cards are well produced, so some may feel that they have gotten their money’s worth.  About two thirds of the cards regulate play of the game, while the others provide a randomized system for terrain placement and for commander’s personalities.

Something else which may put players off the Mustafa way of wargaming is his decision to use Base Widths (BWs) rather than standard units of measurement such as inches.  One of the advantages of Sam’s systems is that he is agnostic about base sizes - provided that your bases are either squares or 3:2 rectangles, they should work fine. Since most of my infantry stands are on two inch square bases, I decided on two inches as the basis for a BW.  Since I found it a little annoying to mentally convert my tape measure into BWs, I spend a dollar at the DIY store on a four foot piece of dowel and after a little bit of work with some painter’s tape and paint, I had created this masterpiece. 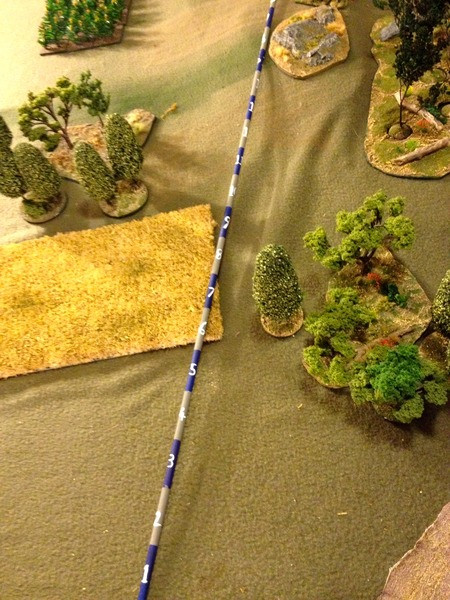 See what I did there?  Blue and grey?  Clever, huh?

Within the rule book the rules themselves take up about half the space, and the rest is dedicated to scenarios, army lists and a campaign setting.   Being me, I had to try the campaign system, starting in 1861, and drew a random general to represent me on the table.  I got a fellow with European service. 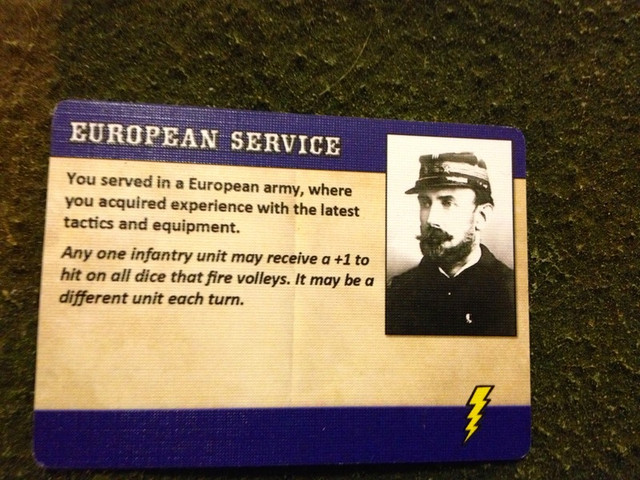 The little lightning bolt means that if a player uses the character’s ability in italics (the volley firing bit) there is a chance that the character can be wounded (Player Characters in Longstreet campaign games are never killed).  I’m sure Messrs Stuart, Jackson, Reno and Sedgewick all wished they had that ability.

So he became Hienrich Schotz, whose family had served for generations in armies of the Kings of Prussia.  Schotz had been a Major of Infantry, assigned to training recruits, but his career had come undone when he wanted to advocate for more humane ways of training.  His  brother Bruno had already immigrated to Milwaukee, where he had become a prominent sausage maker, so Heinrich moved to America in 1851 to join Bruno in business.  Their youngest brother Otto, an apprentice in a Munich brewery, soon joined them. Together they all went into business as “The Brat Brothers”  and opened an emporium that combined food, good German pilsner, buxom fraulein servers in traditional dress, and the latest sports news brought in over one of the first telegraphs in Wisconsin.  Historians of the sports bar see the Schotz Brothers as founders of an American way of life. When the war came, Bruno and Otto both landed fat contracts to supply Wisconsin regiments.  Heinrich, who had no appreciable business skills and was frankly a nuisance to them, was encouraged to offer his services to the state volunteers.  Thanks to his political connections in Milwaukee’s old German ward, Schotz soon found himself a Colonel commanding a brigade of mostly immigrant 90 day state volunteers.

Known to his men as “Hot Schotz” for his irascible manner and emphasis on musketry, Schotz’s brigade consists of:

An assigned regiment of Kansas cavalry, “The Liberty Jayhawkers”.  Not really a German speaking unit, there are some issues of communication.

Two German regiments from Milwaukee, the “Pabst Blue Rifles” and the “Schlitz Jaegers”.  Of these, the former is Roman Catholic and working class, while the latter is mostly Lutheran and recruited largely from shopkeepers, clerks and other businessmen, so there is some tension between the two, largely German speaking regiments.

A regiment of mostly Irish labourers and factory hands, named after their Major, “McCleary’s Navvies”, very few of whom understand any German.

A battery of three sections of artillery (2 of 6lber smoothbores and one howitzer), “The Mikwaukee Brewers”, commanded by Ernst Engel, son of a prominent immigrant beer maker, Max Engel. Unfortunately Heinrich’s brothers reneged on an exclusive contract to supply their tavern with Engel Lagerbier, and so relations between Schotz and his battery commander are a little frosty.

All troops are rated as Eager Recruits, combining the worst of élan and inexperience.  The Longstreet campaign came calls for starting units at 10 bases strength.  Due to the limits of my collection and it’s size (25-28mm), I opted for six bases per unit.

Schotz’s Milwaukee Brigade was sent to Kentucky to work under the command of General George Thomas, serving alongside another western brigade commanded by Albin Schoepf, another European born officer who has served in the Austrian and Ottoman armies.  Thomas refers to Schoetz and Schoepf as “my two fighting Dutchmen” and the two brigadiers get along well.   In early fall of 1861, Schotz is ordered to advance towards the Tennessee border and hold the hamlet of MacGillicuddy Corners in case of a suspected CSA troop movement.   In fact a brigade under CS Colonel Abner Crutch of Zollicofer’s Division has orders to take the same crossroads.

A meeting engagement seemed the best way to learn the manoeuvre rules in Longstreet, and so I chose two mirror forces reflecting early war troops of both sides, keen but not well trained.

As is my usual practice, i laid out a table that I found both plausible and attractive.  This layout allowed me to use some recently competed terrain features, and some very spiffy fencerails that my friend Mike Barratt made for me, to replace the hideous older ones that I made some years back and which can be seen on the big bases at the Union entry area below.

Union force enters the table from the bottom of the picture.  The 6th Kansas “Liberty Jayhawkers” lead the way, followed by Colonel Schotz, followed by the Milwaukee Jaegers.  On the left, the Pabst Blue Rifles move off from their start positions towards the table centre. 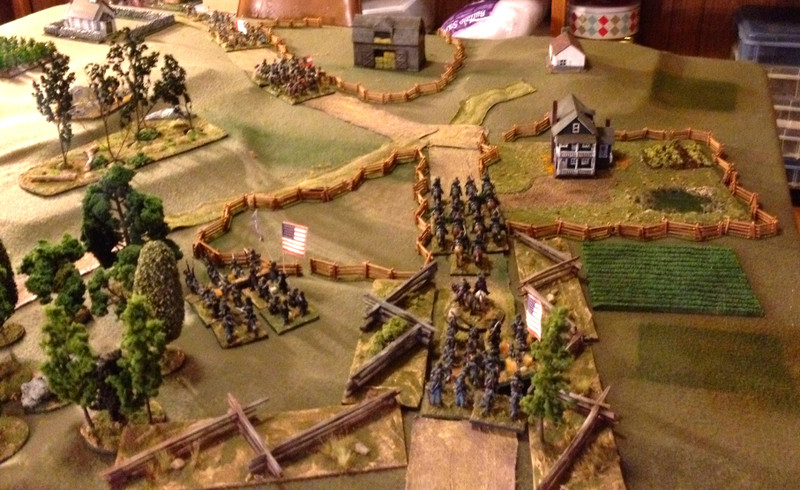 Col. Abner Crutch’s brigade enters from the other table edge.   A local unit, the 3rd Kentucky Rangers, a cavalry unit, leads the way, followed by the 31st Mississippi, followed by Snedden’s battery. 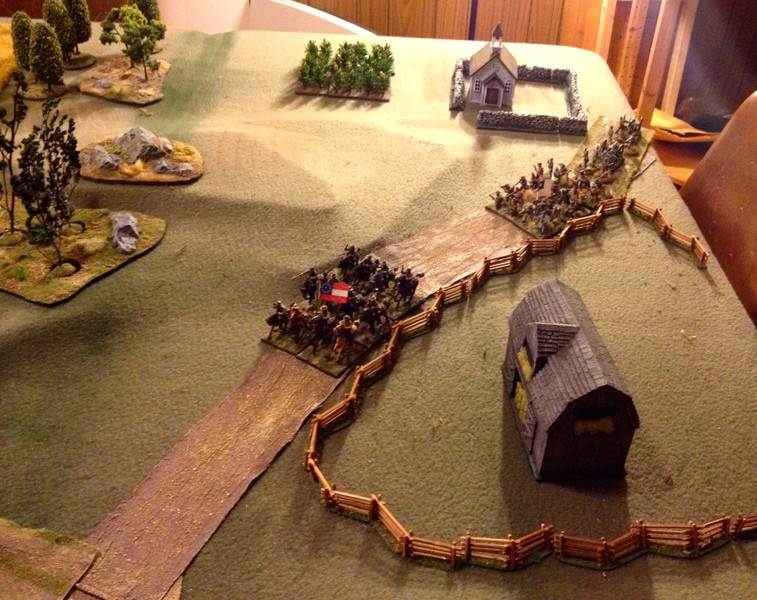 Kentucky Rangers and the other Confderate units benefit from the Quickstep Card which modifies the first CS movement phase, giving each unit an extra two BWs of movement. 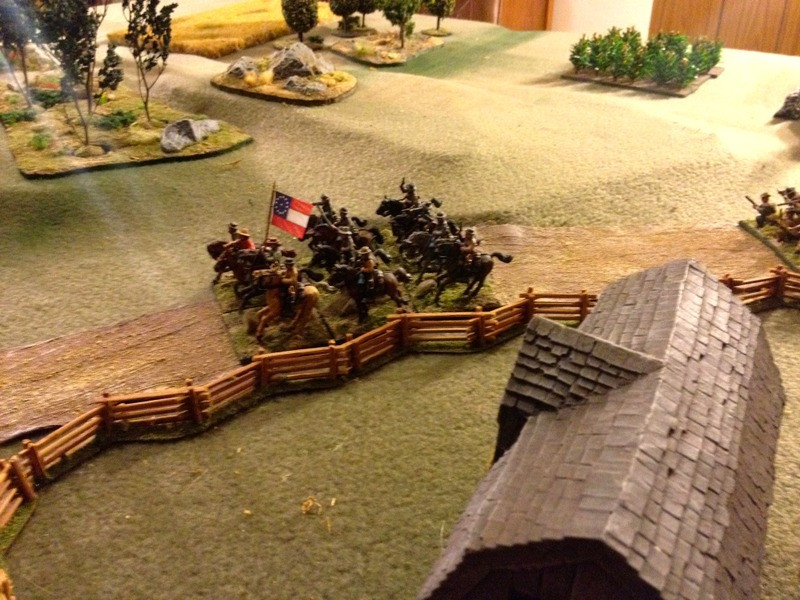 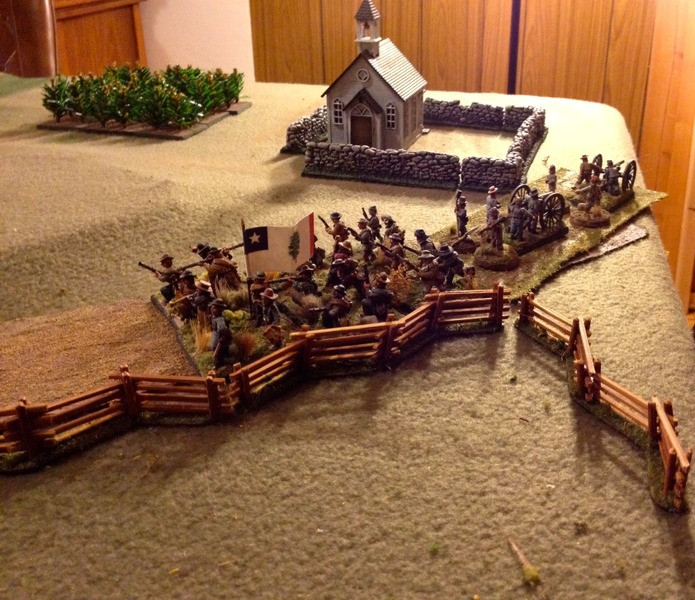 An example of one of the cards in Longstreet that can wreck the other player’s day.   It seemed like a fun card to play as Miss Laetitia MacGillicuddy, protected by her house maid Dillsy, watch the Yankee cavalry invade their eace. As the card says, it allows the CS player to steal two cards from the Union hand that turn.   The dates at the bottom indicate that the CS player can have this card in any scenario set in the years 1861-64.  To simulate the initial advantages of the CS armies, Mustafa gives the CS player many such cards in the early years of the war, but mid to late war the US player starts getting cards that give an advantage, showing the gradual tipping of momentum to the US.

Union artillery, the “Milwaukee Brewers”, enter the table.  I really do need some limbers. 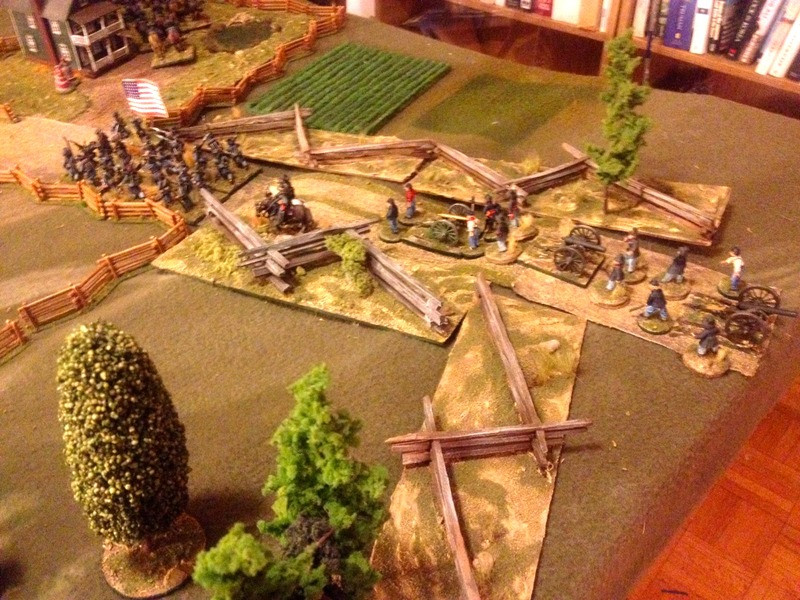 The Pabst Bliue Rifles head for the woods on the hill.  At the crossroads, the Kentucky Rangers have dismounted and formed line. 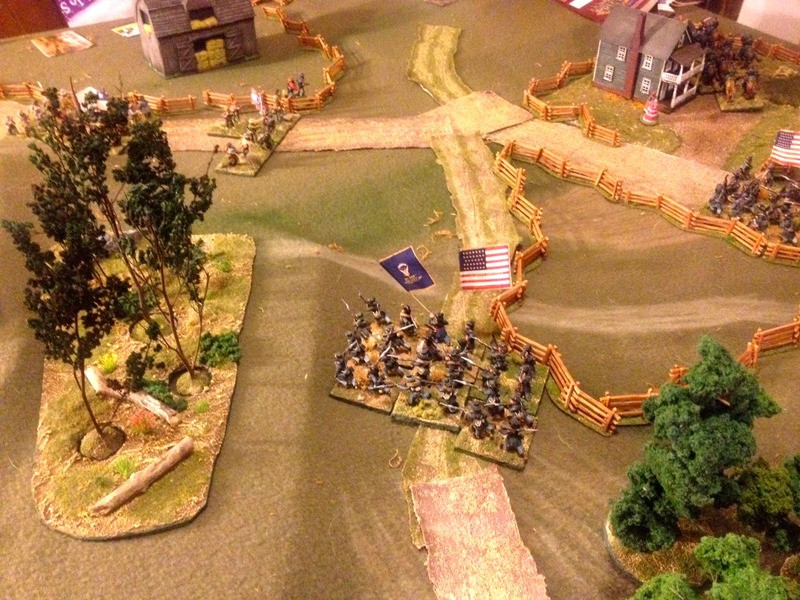 Snedden’s Battery heads for a hill near the Primitive Baptist Church, while the 31st MS move to support the Kentucky troopers.  A second CS infantry outfit, the 19 Texas (Galveston Rifles) enter the table. 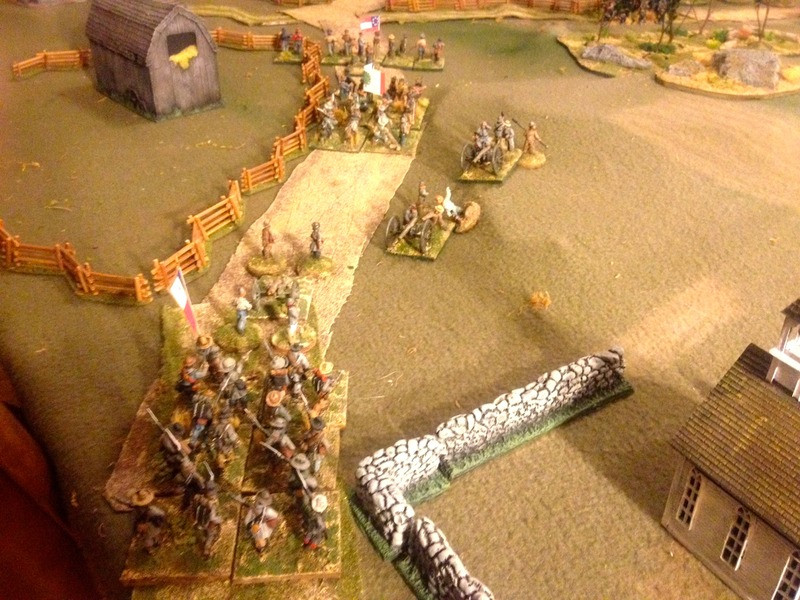 After saluting Miss MacGillicuddy, the Kansas troopers swing around her farmhouse with the intention of dismounting at the fencerails.   They aren’t keen to charge the dismounted rebs and face the carbine fire, not with those  feb infantry supports coming up behind. 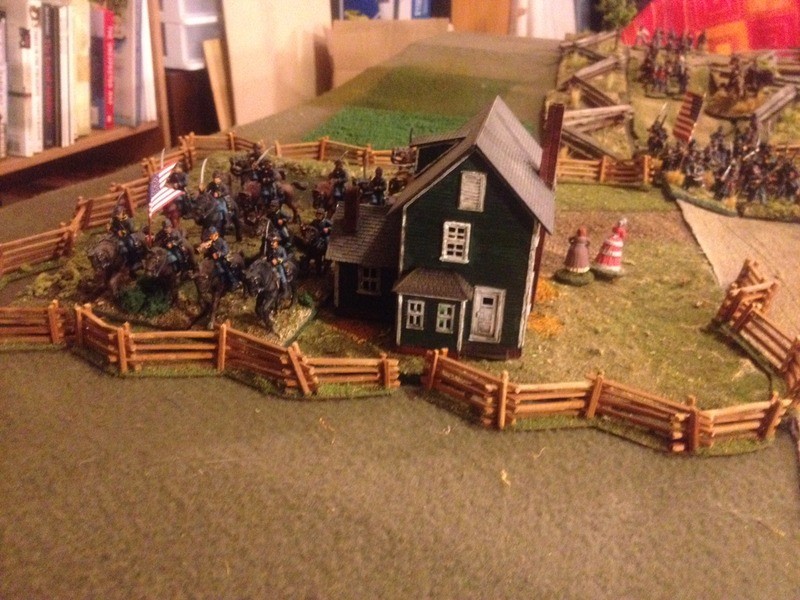 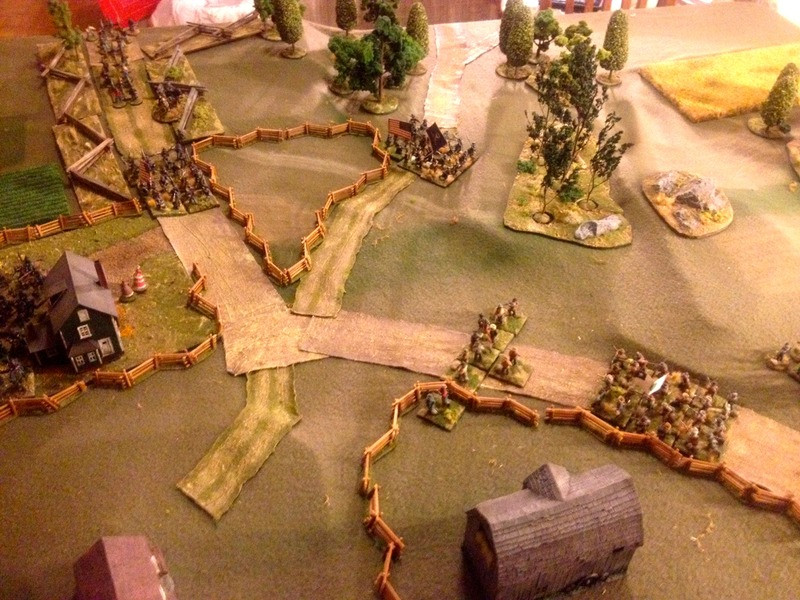